Rumours have been circulating for a while now about a new race of Giants coming to Warhammer Age of Sigmar. Shipping documents have shown a delivery of Warscroll cards heading to the US for a mysteriously titled “Sons of Behemat”

So who are the Sons of Behemat and what do we want to see from the inevitable Battletome?

The Legend of Behemat

The name Behemat is not new to Age of Sigmar, in fact this legendary godbeast has been with us since the early days of the game! Back in the Grand Alliance Destruction book, the pages covering the Aleguzzler Gargants goes into some detail on Behemat and his sons…

A remnant of the Age of Myth, there are many tales of how the Aleguzzler gargants came to be. Some tell of how there was once an ancient race of gargent builders who walked the Mortal Realms helping the free peoples construct their grand cities and empires. Wise and strong, the greatest of them sat on Sigmar’s councils during a golden age of expansion and prosperity. To look at them now, though, few could imagine gargants ever being so well mannered, or Sigmar letting them anywhere near his cities. For these reasons, others are convinced that the gargants are the descendants of Behemat, a zodiac godbeast said to dwell in Ghyran. According to these tales, they were once mighty forest-dwelling warriors and woodland kings, whose empires stretched over the horizons in every realm. Coarse in nature, even slightly bestial, they pursued civilisation after a fasion, but then, as now, they weren’t partial to excessive amounts of clothing for personal hygiene.

Behemat later turned up again in the Realmgate Wars book Godbeasts – Archaon had planned on awaking Behemat and binding him to his will. In the book the forces of Nurgle and the Skaven are corrupting the land of Ghyran to cause paint and suffering to Behemat and corrupt his essence. We are also introduced to the Great Green Torc, which is a massive floating ring far above Ghyran that is said to once be ruled by the greatest of the gargants. When Behemat awoke, Archaon planned to whisper half truths in his ear and convince him that Sigmar was to blame for all that had befallen him, and use the Godbeast as a battering ram into the heart of Sigmar’s domain.

It’s in this book that we also learn about King Brodd, The Last True Son of Behemat

The massive gargant King Brodd came from the wilderness to lead the gargant
tribes of the Sprawl, insisting that he crawled full-grown from the chasm known as
Titansmawr. Those giant elders belligerent enough to challenge him had their brains
bashed out in such spectacular displays of violence none have questioned his rule
ever since. Brodd is exceptionally strong, even for a gargant – the skull he wears as
a crown came from a mouldragon he killed with his bare hands. Wherever he goes,
Brodd carries a huge granite pillar – both his symbol of rulership and his weapon
in times of war. The stony artefact was a part of the old Behematian Temple that
once crested Tor Crania, a monolithic structure toppled by cyclopean mutants long
ago. Once his swamp-dwelling gargants have gathered in numbers enough to take
revenge, Brodd intends to see the temple to his titanic father rebuilt, its mortar the
ground bones of the same beastmen that dared tear it down.

Once Behemat was roused to war by Achaon, the forces of Sigmar has no other choice than to destroy the beast, ultimatly breaking the mighty god-beast’s head in two with the divine power of Ghal Maraz. The entire region was destroyed in the resulting fallout, and Archaon’s plan was halted.

But what happened to Behemat’s sons?

So what do we want to see in the new Battletome?

I think a new kit is going to be coming alongside this, the plastic Giant kit was revolutionary at the time, but pales in comparison to the kits that Games Workshop are currently putting out. I would love to see a new giant make it’s debut as the biggest plastic kit for Age of Sigmar – towering over Archaon as a truly impressive behemoth.

Imperial Knights have been very popular in 40k as a way of running an army with small numbers of massive kits, and I can see the same being true for the Sons of Behemat. While we are spoilt with lots of options for battleline behemoths in the current edition of Age of Sigmar, it would be amazing to have an army built around nothing but behemoths! This could go as far to even have their own bespoke rules for army construction, perhaps even changing the number of compulsory units to account for the low model count.

If we are getting massive impressive gargants, then it would be great their points and rules to stack up against such a big kit with armies as small as 3-4 models being possible perhaps.

We could even see the old Aleguzzler kit taking the role of Armigers (to use the Imperial Knights analogue) as an option of having more numbers in your force, or having specialist roles – even if it means creating multiple profiles for them… 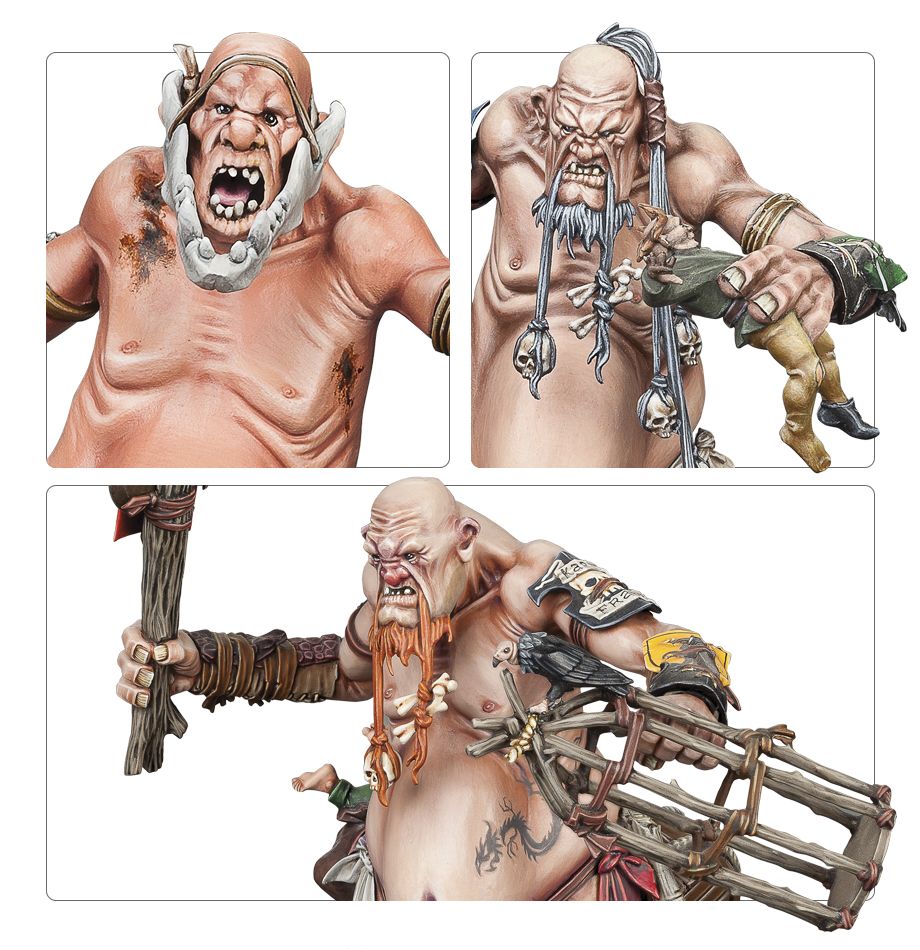 The current Aleguzzler gargant has a lot of multiple options that could easily be represented as different “types” of giant, perhaps with multiple wascrolls and profiles for each different way of building the kit. This suddenly adds a lot more units to the pool available to Sons of Behemat players, and follows the pattern of 40k knights with different loadouts having different profiles.

If we are to get a new “big” gargant kit then I imagine it will also follow the same philosophy. Perhaps a big elite giant costed around the 600 point mark as the main workhorse of the army, with an alternate build for either King Brodd or a generic Behemat HQ choice.

This would add a lot of variation to Sons of Behemat armies without having to release lots of new kits for the range – it also means that these can be “future-proofed” by making it possible for new sprues to be created at a later date to add more options, just like we have seen with the Imperial Knights range.

The Ironblasters used by the Ogors are said to be masive ancient cannons that were once used by titanic creatures, how cool would it be to see a huge gun toting gargant? This is just one way that they could add some awesome models to the force.

One thing that low model count armies often snuggle with is holding objectives, but I think we may have seen a hint into how this will be balanced in the Ogor Mawtribes book. Each gargant could count as multiple models for the purposes of objectives and this could increase depending on how big the gargant is – the current plastic ones counting as 10 and our wish of a big one counting as 20 perhaps – this would allow you to be able to hold objectives even when you are swamped with an opposing horde!

Some of the lore we have already looked at hints at the ancestors of the gargants as being used in the construction of mighty temples, and Brodd himself carries part of a ruined shrine to Behemat – could we see some kind of scenery piece along these lines as some massive ruin that dwarfs smaller models below it? Most recent releases (but not all!) have had some king of terrain piece that affects the army, it would be great to see one here!

One of the defining things about the original giant in Warhammer Fantasy was the fallen giant template – this was used to show what the giant hit when it fell over and was great fun to use! Can you imagine if we got a 3D plastic template?! It’s not that much a stretch as one was created back in the Warhammer Fantasy days!

I for one would happily paint up a fallen gargant however!

So the big question is when is the Battletome released? We know that Seraphon are next, and I expect these to drop in the next couple of weeks. We also know the Lumineth Realm-lords are coming later in spring. Could we see the Sons of Behemat drop in the next month or two perhaps between these two releases? Games Workshop have been putting stuff out at a rapid pace for the last few years, so I dont think it’s out of the question that we could see the Sons of Behemat soon to these other two books. Part of me also wonders if we could get them in a Battle Box utilising the old plastic gargants for the Behemat force, maybe even against the Lumineth themselves? Either way, I’m sure it wont be too long will we have more concrete details on this much anticipated army!

So what do you hope that we see coming for the Sons of Behemat Battletome? Is there anything in particular that you wouldn’t want to see in the book? What would your dream models look like? Let us know in the comments and over on social media!