If you are a fan of Warhammer Fantasy Roleplay, then I’m sure you will have heard of The Enemy Within campaign. Originally written back for the original release of WFRP by Games Workshop, this was an epic adventure of cults and chaos and dangers to the very fabric of the Empire. Rather than being the heroes, the player characters were beset from all sides with even the people they helped to save turning on them. Warhammer 40,000 is known as Grimdark for its dystopian nightmare of a future, Warhammer Fantasy Roleplay describes itself as “Grubby Fantasy” for this sinister, dirty and unfriendly world. People will be backstabbed, player characters will die horrific deaths and the bade guys might just win.

Some minor spoilers about the overall plot are ahead, so beware!

With the new edition of Warhammer Fantasy Roleplay recently released, Cubicle 7 wanted to revisit this legendary campaign over a series of 5 books (and 5 companion books!) to breath new life into The Enemy Within and bring it up to date to appeal to both newcomers and fans of the original series.

Enemy in Shadows contains the first two adventures in this series, Mistaken Identity tells the tale of  the party stumbling across the body of someone who looks rather like one of them… this leads them to a journey through Altdorf and beyond that results in them being drawn into a plot to lead them to the merchant town of Bogenhafen.

The second adventure, Shadows Over Bogenhafen kicks off with the bounty hunter about to apprehend the party for the crimes of being a member of a chaos cult – that is until the bounty hunter is ripped apart by a Daemon! The players eventually find evidence of a Chaos Temple and the race is on to save the city from the unfortunate fate of a gate to the Realm of Chaos opening imminently!

The book leads you through the adventure in a clear and concise way with clear boxouts holding any important info, maps and handouts included in full as you go, and all NPC gathered together at the end of each section. The GM is also given a breakdown of what XP should be handed out at the end of each session – something that is often hard to gauge for people new to Roleplaying Games.

With 9 sessions worth of content, these first two adventures offer a massive amount of play time that should keep you and your party entertained for months, and that’s before you factor in any diversions your group might take you on between the written adventure!

Enemy in Shadows also has a hefty section about the town of Bogenhafen which not only gives you the flavour and content you need to bring the town to life, but also acts as a great resource to adapt for creating your own cities of the Empire.

We also get an appendix covering the new mutations, diseases and traits introduced in this expansion. This section also has a great chart explaining what the various accents of the Empire sound like in order to give the GM some guidance on their accents and to ensure that the accents stay consistent over the course of the  campaign! This chart may also be of interest to players who want to roleplay alongside side this for the sake of consistency!

Finally we get all the handouts and maps mentioned over the course of the campaign reprinted again at the end of the book, but this time with some absolutely gorgeous detail for you to print out and give to your party. I love stuff like this as it really makes the adventure seem more “real” by having tangible letters and maps that your party can absorb and interact with.  We also get a copy of the Imperial Calendar to make tracking the passage of time much easier!

So what about people who have played the campaign in the past? Well, Cubicle 7 have made a great touch in including what they call “Grognard boxes” that can be used to alter the story in ways that may through experienced players off the scent or subvert their expectations.

As with other Warhammer Fantasy Roleplay products, the artwork is great with both colour pictures and black and white drawings that really bring to life the Warhammer World and reinforces the fact that this isn’t your typical fantasy world, this is something much grubbier!

If you are interested in dipping your toes into running a Warhammer Fantasy Roleplay campaign I don’t think you can go wrong with this campaign, the book guides you through the events while still giving enough freedom to go off the rails when your party decides to blindside you!

The real surprise for me in this set however is the Enemy in Shadows Companion. Pitched as a supplement to expand on the Enemy in Shadows book, I was expecting material that can be used to just give you more resources in running your Enemy Within campaign, but it turns out it is much more than this!

This book is absolutely jam packed with content, with not even the inside covers wasted!

We start with introductions from the original writers looking back at the original campaign and how things like Bogenhafen have cropped up over the following years. This is an interesting read and gives some insight into how the campaign was first created all those years ago! We also get a brilliant chapter about the various easter eggs and jokes that had been sprinkled throughout – such as “Von Saponathiem” the liege lords of Bogenhafen – which sounds rather like “Once upon a time” when you say it in a fake German accent!

The first main section of the book is really detailed and helpful information about the wider Empire, the various provinces, the Elector Counts, and even how taxes are set within the Empire. I was really impressed with this information and found it would be useful for running any campaign, not just for use with Enemy in Shadows.

Travel is also expanded massively with this book with chapters on the roads and highways of the Empire, the various coaching houses who serve them, a huge expansion on different types of draught animals and mounts in order to add some granularity to using these to travel the long, dangerous roads between cities. Likewise we also see expansion on vehicles within the Empire, offering stats and info for a load of different sized vehicles that you might encounter on your adventures. We also get expanded rules for mounted combat, something that is likely to happen on the road between adventures.

I think it’s safe to say that if you want to flesh out the rules for travelling across the world in your adventures then this book is an absolute must buy – the book takes the “Between Adventures” chapter of the main rulebook and expands on this with everything from random weather charts, to new endeavours that can be taken while travelling. We also get multiple random encounter charts to roll up on when you need to spice the journey up with something happening. the book also offers information about the Wardens who patrol the roads, along with some example NPC stats for them.

In the first Enemy in Shadows specific section of the book, we get 16 NPCs who can be used to pull wandering adventurers back to Bogenharen and drive the story forwards, these can also be used to add some flavour and distractions if needed. The GM is going to have a load of choice with these varied characters and again could also be adapted for your own hand crafted campaigns.

For fans of the ruinous powers, we also get  comprehensive section detailing Mutants (along with some D100 charts for each chaos power!) and the Purple Hand (The insidious Tzeentch cult at the heart of the adventure) offering spells, abilities and profiles for all things Tzeentch!

The final section of the book offers some more adventures that can be used add more threads or sessions to your The Enemy Within campaign. These are presented in the same format as the adventures in the main Campaign book, along with the recommended rewards and details of all NPCs,

But that’s not all! We also get 6 premade player character sheets that can be used as an easy entry point into your Warhammer Fantasy Roleplay campaign. I know a lot of people really enjoyed using the premade characters in the Starter Set, and this allows a new group to use these characters in a similar way, which will be much appreciated by people perhaps new to Roleplaying Games.

While before reading it I was dubious of how useful the Companion tome would be for experienced GMs, I am now absolutely sold on it – This is not just an expansion for Enemy in Shadows, but instead something that adds so much to all your games of Warhammer Fantasy Roleplay and well deserves a place on your bookshelf. 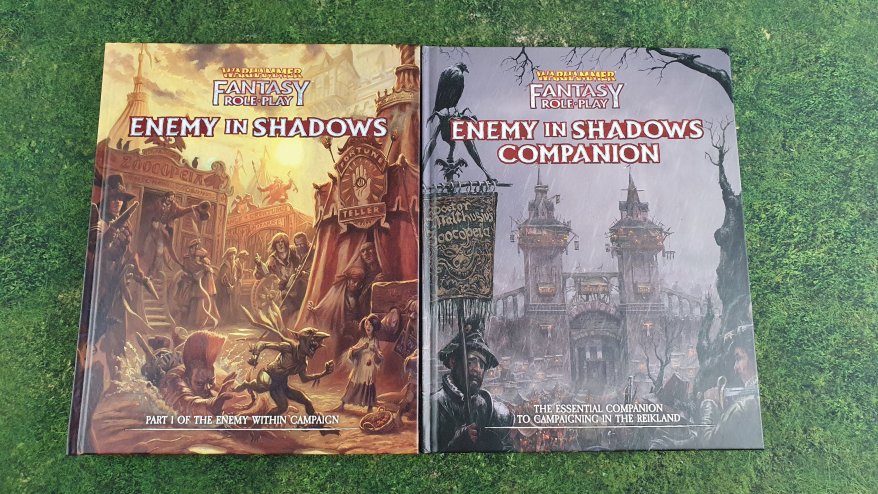 The Enemy Within Campaign is off to a cracking start with these two books and I can’t wait to see how the following books continue this trend. Cubicle 7 have done a great job taking this classic of the 80’s and bringing it up to date with all the production values and gloss of modern roleplaying supplements while keeping it’s grubby sinister heart intact.

We also recently checked out the new Gamemaster’s Screen in the below unboxing!

Thanks to Cubicle 7 for providing us review copies of this book prior to general release.