Lots of cool stuff coming for pre order next week from the brand new edition of Blood Bowl to reinforcements for Adeptus Titanicus! Check out all the details over on Warhammer Community!

The This Week in Warhammer video also mentions that new board games and video games will be featured this week too – so make sure to stay tuned to WarCom for that!

Next week sees the release of some incredible pre-orders, including the new Blood Bowl boxed set. Before we get onto the details, let’s follow the advice of legendary Blood Bowl commentators Jim and Bob and check out the highlights.

The amazing new Blood Bowl boxed set features everything you need to get into the game of fantasy football. The box contains the full hardback rulebook, which includes all the rules you need for the new season, and two sensational plastic teams. 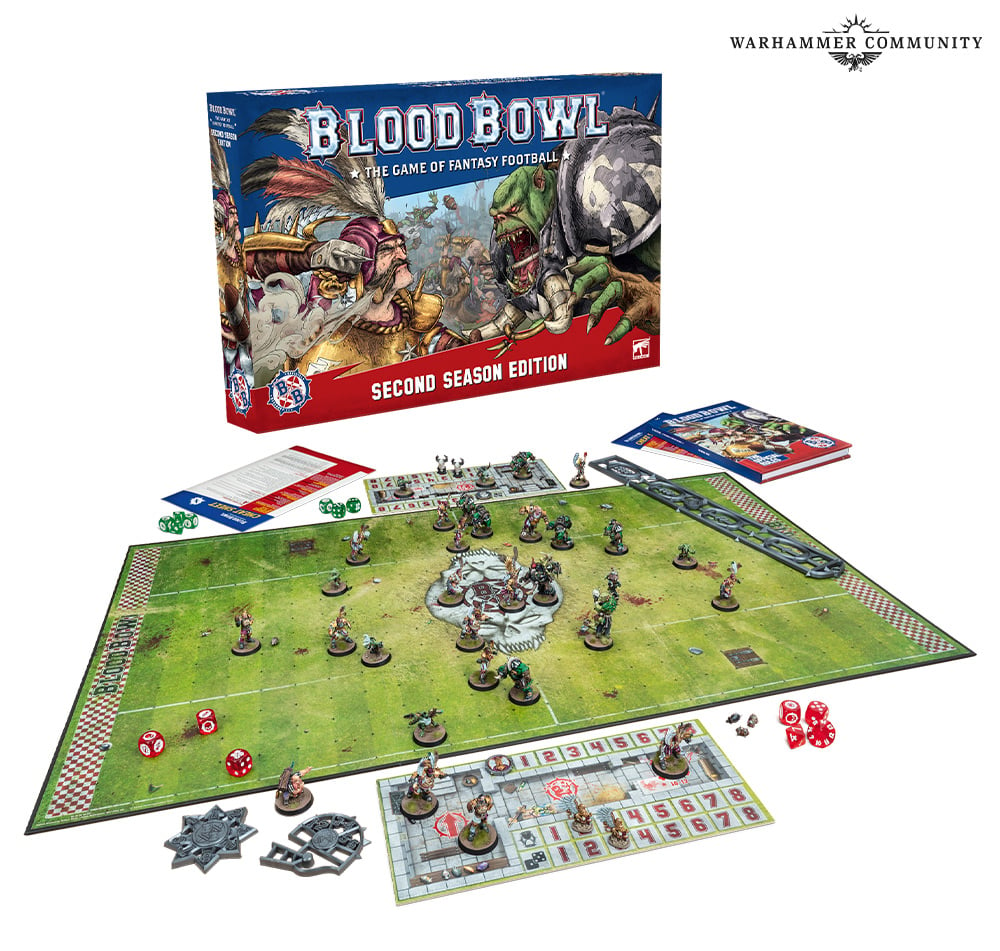 The Imperial Nobles team, the Bögenhafen Barons, is made up of Linemen, Bodyguards, Blitzers, and Throwers. They can also call on the talents of Star Player Griff Oberwald and the brute force of an Ogre. 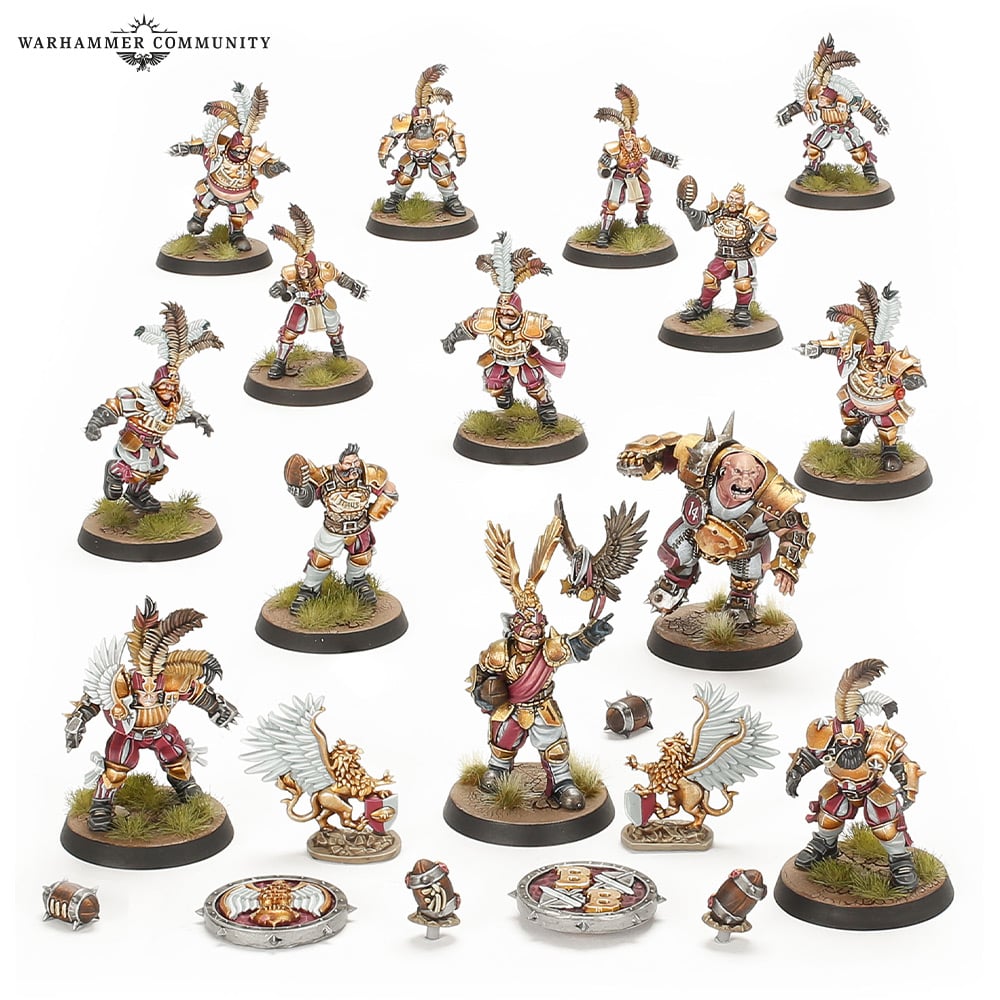 On the other side of the Line of Scrimmage is the Black Orc team, the Thunder Valley Greenskins. Featuring a line-up of Black Orcs and Goblin Bruisers, they also have legendary Star Player Varag Ghoul-Chewer and a Trained Troll. 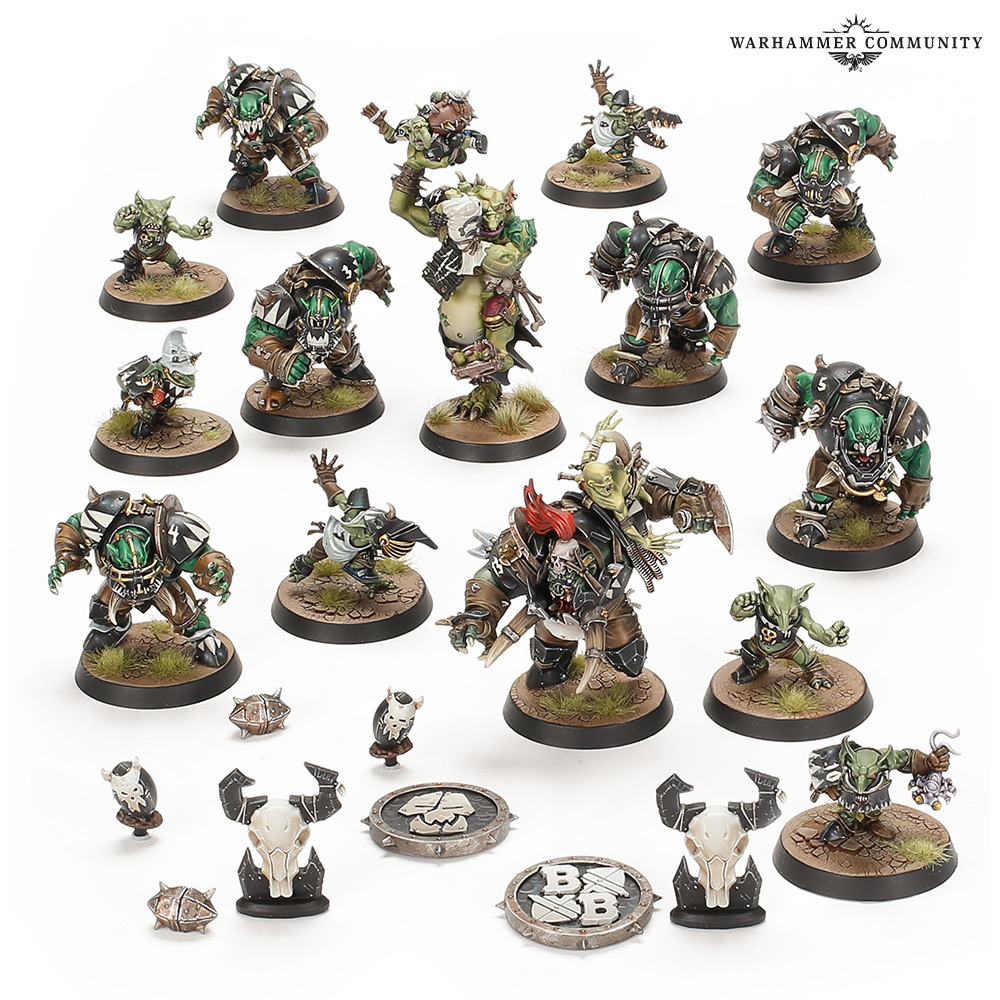 This absolutely jam-packed box also contains a pair of referees, a double-sided pitch, two dugouts, two sets of dice, and all of the templates, tokens, and counters you need. Grab it now and get ready for another season of blitzes, blocks, and blood.

Blood Bowl: The Official Rules are also available separately in hardback and ePub editions. As well as the updated rules and regulations for the new season, the book contains a detailed lore section with more Blood Bowl background than ever before. There are also rules for playing both league and exhibition games, rosters for all 21 current Blood Bowl teams, and details for 23 Star Players. 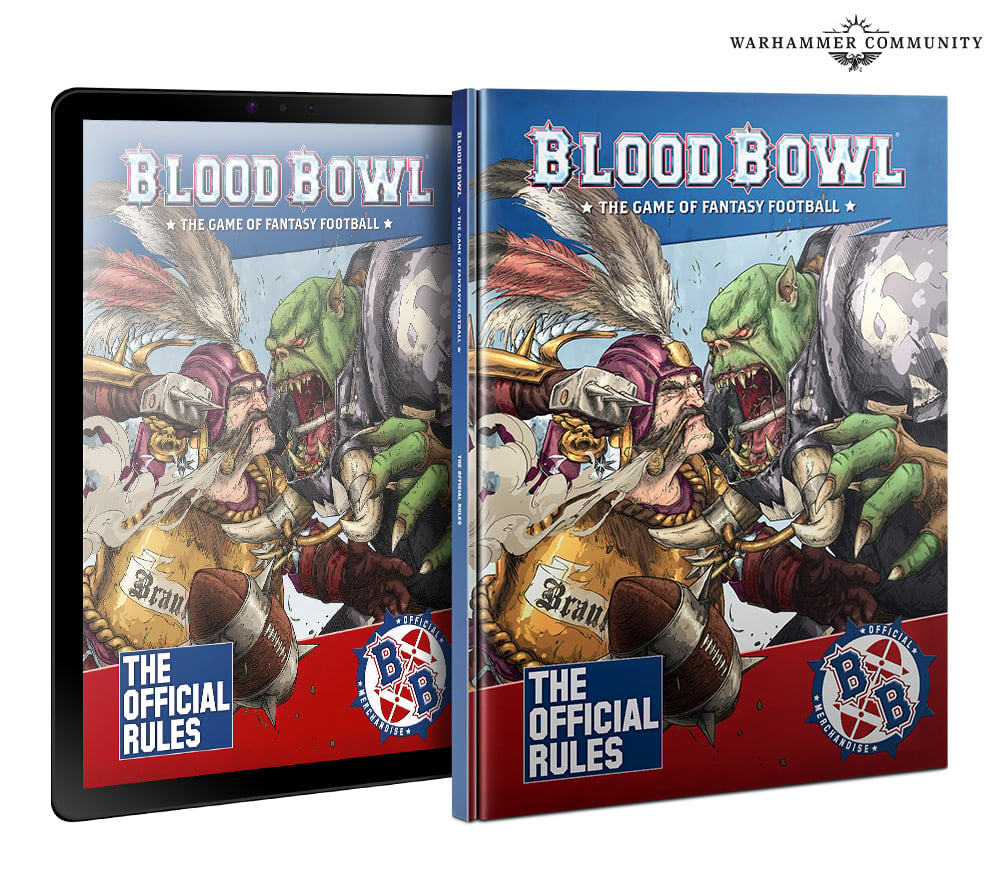 Along with the boxed set and rulebook, you can also get a set of universal Special Play cards. These are inducements that are available to all Blood Bowl teams and they’re a great way to help even the odds when you’re playing against a better line-up. From Dirty Tricks to Magical Memorabilia, and even Prayers to Nuffle, they’re all here. 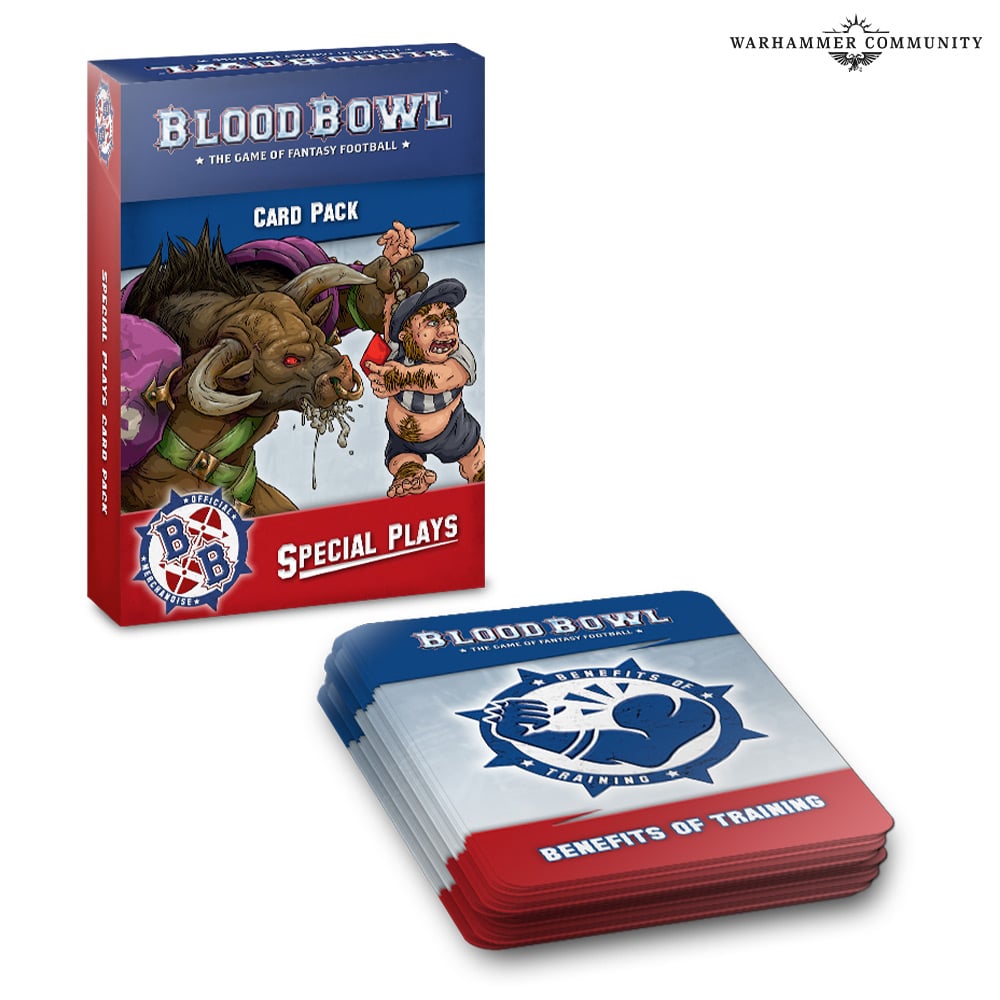 There’s an old saying in Blood Bowl that you can’t keep a good team down – the Wolfenburg Crypt-Stealers prove that’s the case even if they’re six feet under! Made up from a combination of Zombies, Ghouls, Wraiths, Werewolves, and Flesh Golems, they have a really good mix of speed and strength. Plus, with Regeneration for most of the team, they’ll always be back for more. 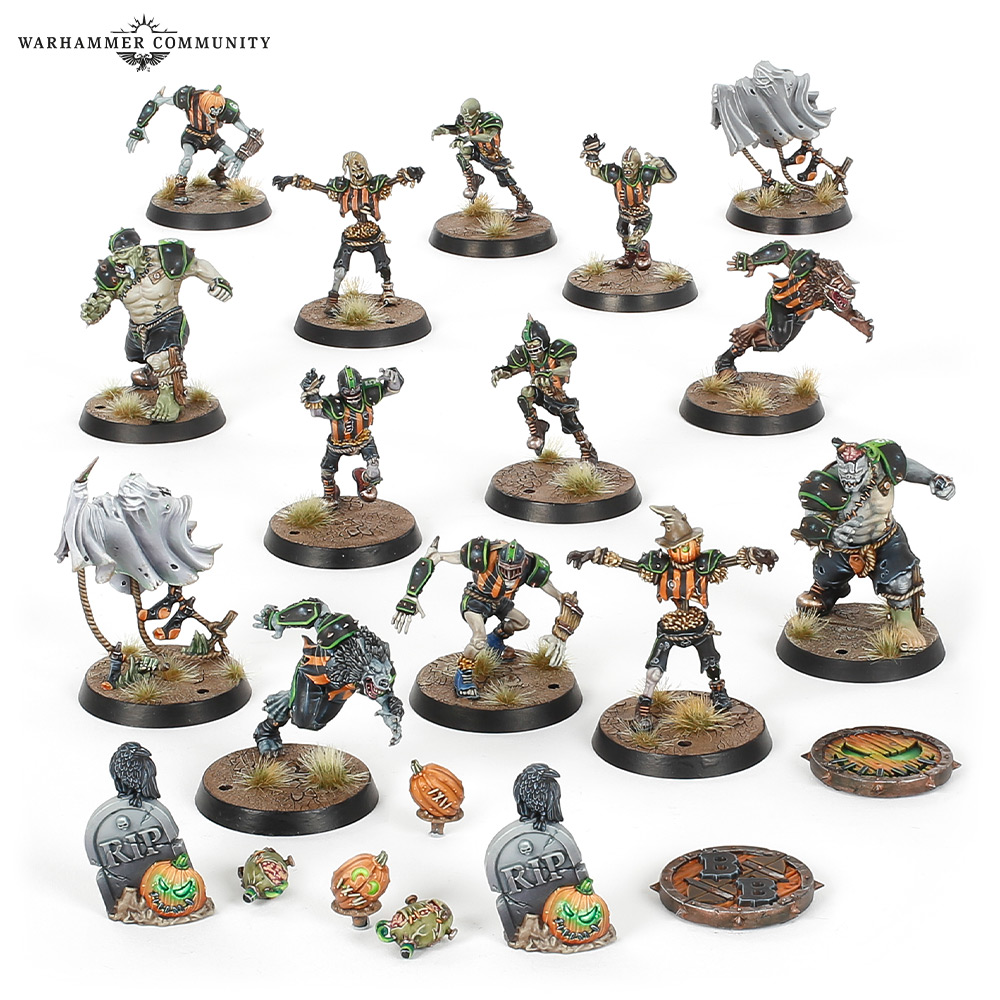 Support your Necromantic Horrors team with a dedicated dice set, pitch, and team card pack. The double-sided pitch comes with two dugouts and optional special rules that will ensure that you’ll always have home-field advantage. The cards help you to easily keep track of your team’s stats, even during a high pressure match, and also includes 16 Special Play cards. And every necromancer will want to keep team spirits high with a ghostly set of dice. 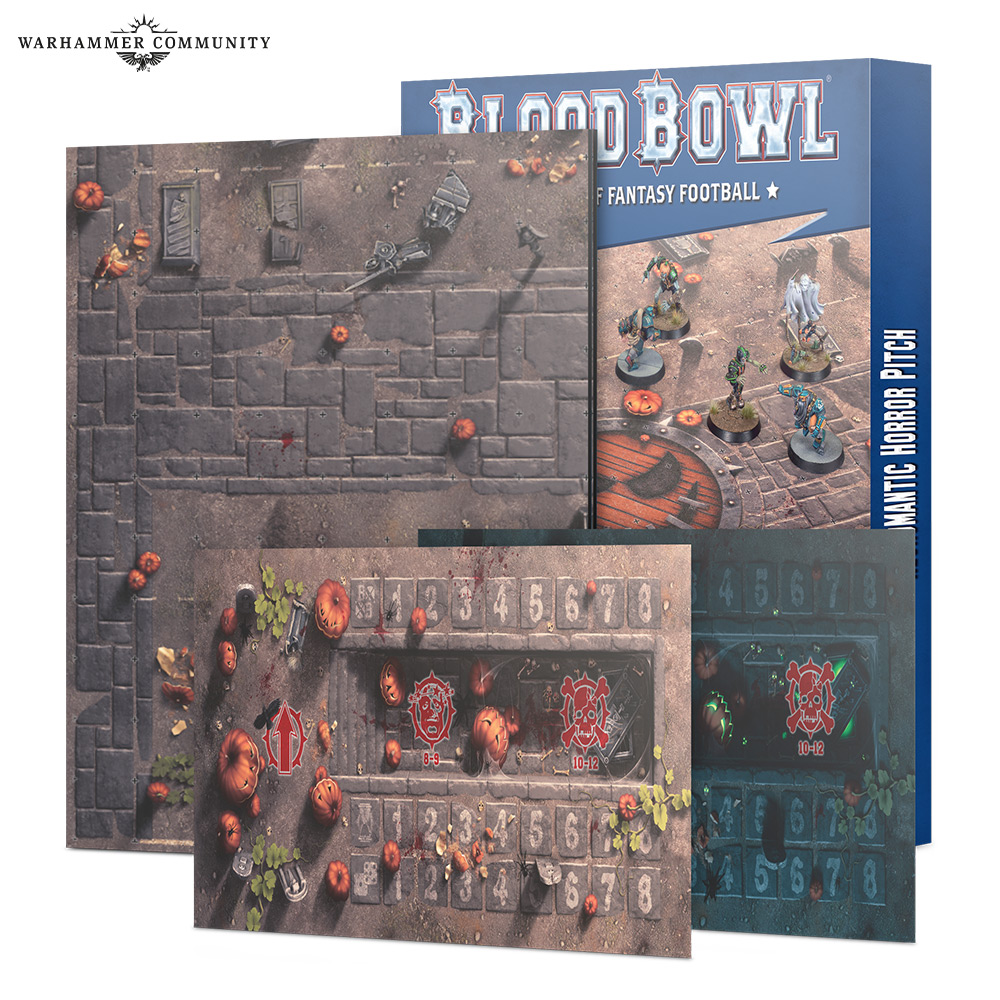 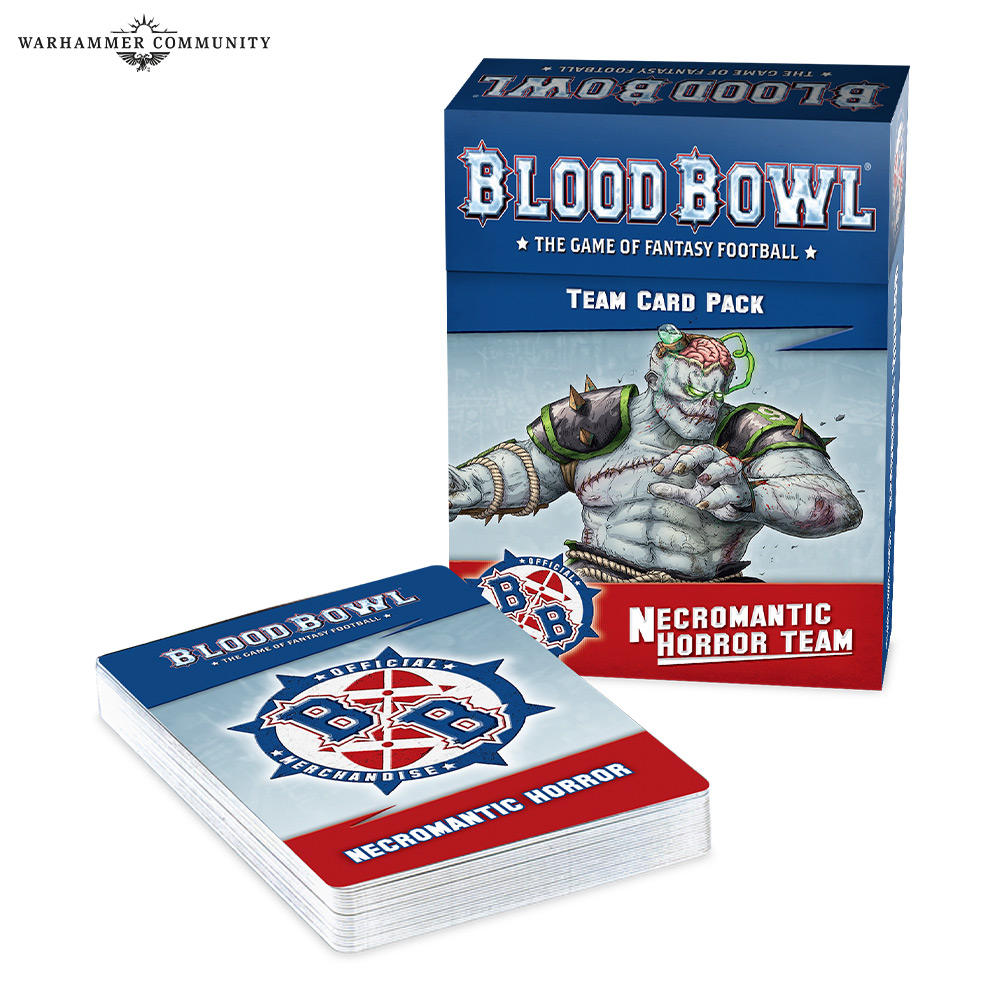 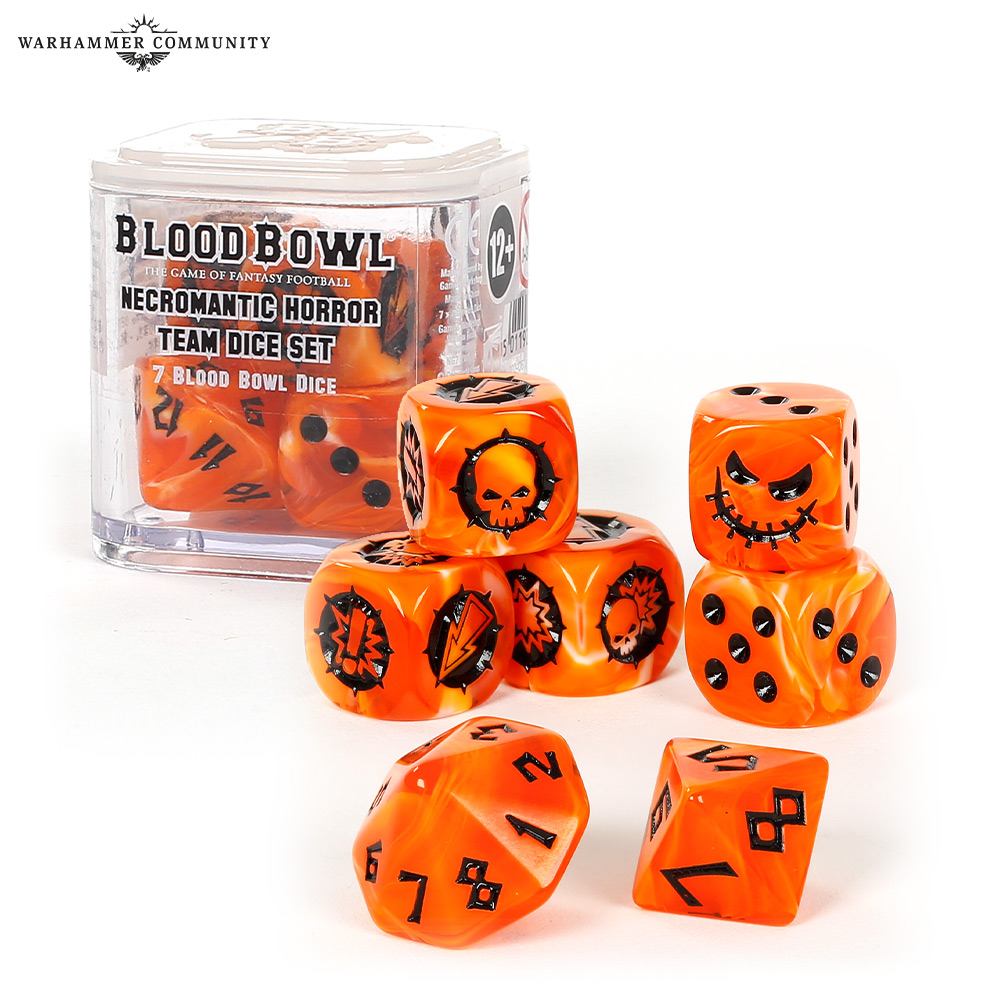 Also out next week is the latest edition of Spike!, and issue 11 of the Blood Bowl journal focuses on the Necromantic Horrors. As well as everything you need to get your team on the field, it showcases their history in Blood Bowl, fan-favourite Star Players, and some of their most famous teams. It’s full of treats and some tricks to help coaches achieve victory on the astrogranite.* 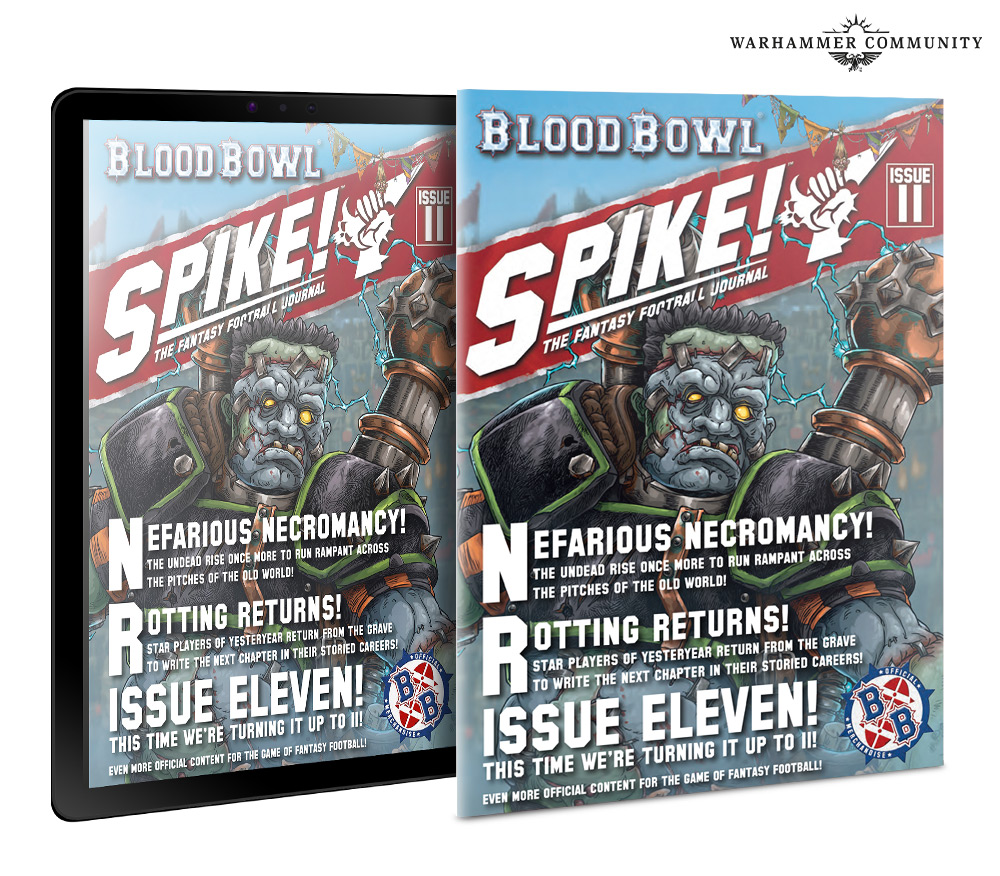 That’s still not all! Akhorne the Squirrel is also making his long-awaited Blood Bowl debut. What good is a squirrel against some of the biggest and toughest players of fantasy football? Did we mention that he’s sat on top of a mighty Treeman? The kit makes one of two different Treemen, both of which are looking to put their roots down for a new team. 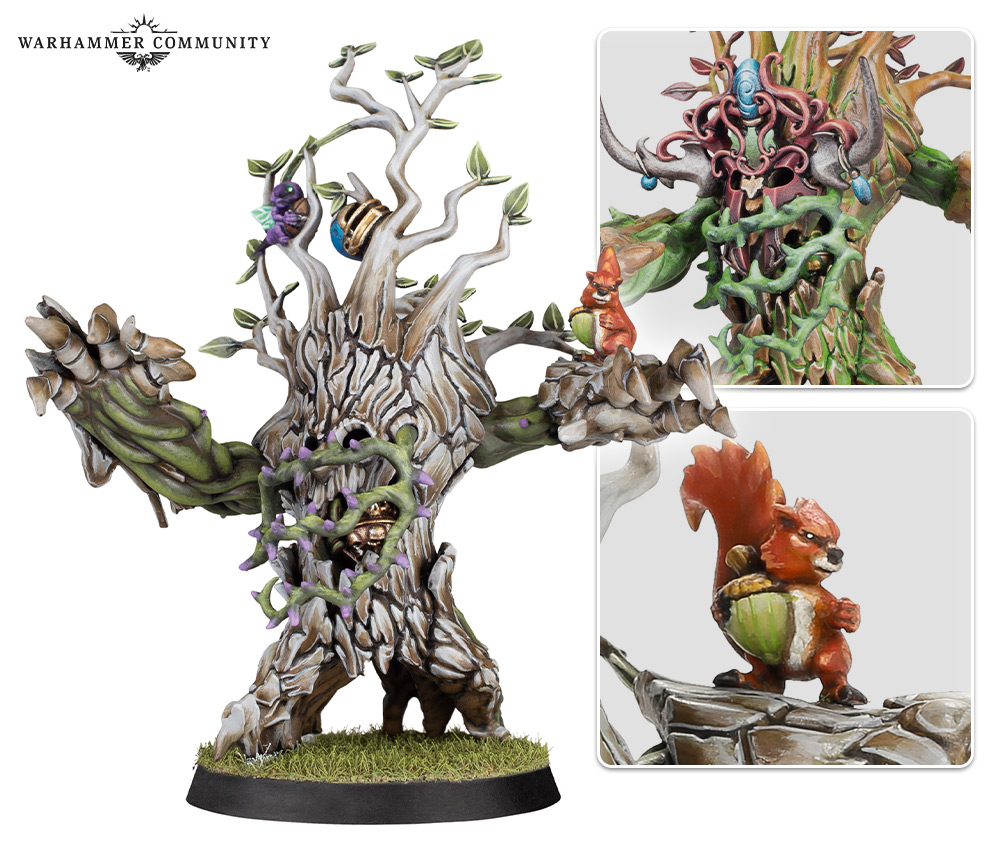 Next week also sees a number of teams repackaged for the new edition. These boxes will contain the second season rules for the team – the perfect way to kick off the latest edition of Blood Bowl.

It’s not quite Christmas, but this month’s White Dwarf comes with some gifts for you – new cards for Adeptus Titanicus, Necromunda, Aeronautica Imperialis, Warcry, and Blood Bowl. It’s also full of incredible articles including the continuation of the Warhammer 40,000 Flashpoint series, looking at the Argovon Campaign, a Battle Report for Warhammer Age of Sigmar, and a Wizards’ Duel minigame for the Middle-earth Strategy Battle Game. 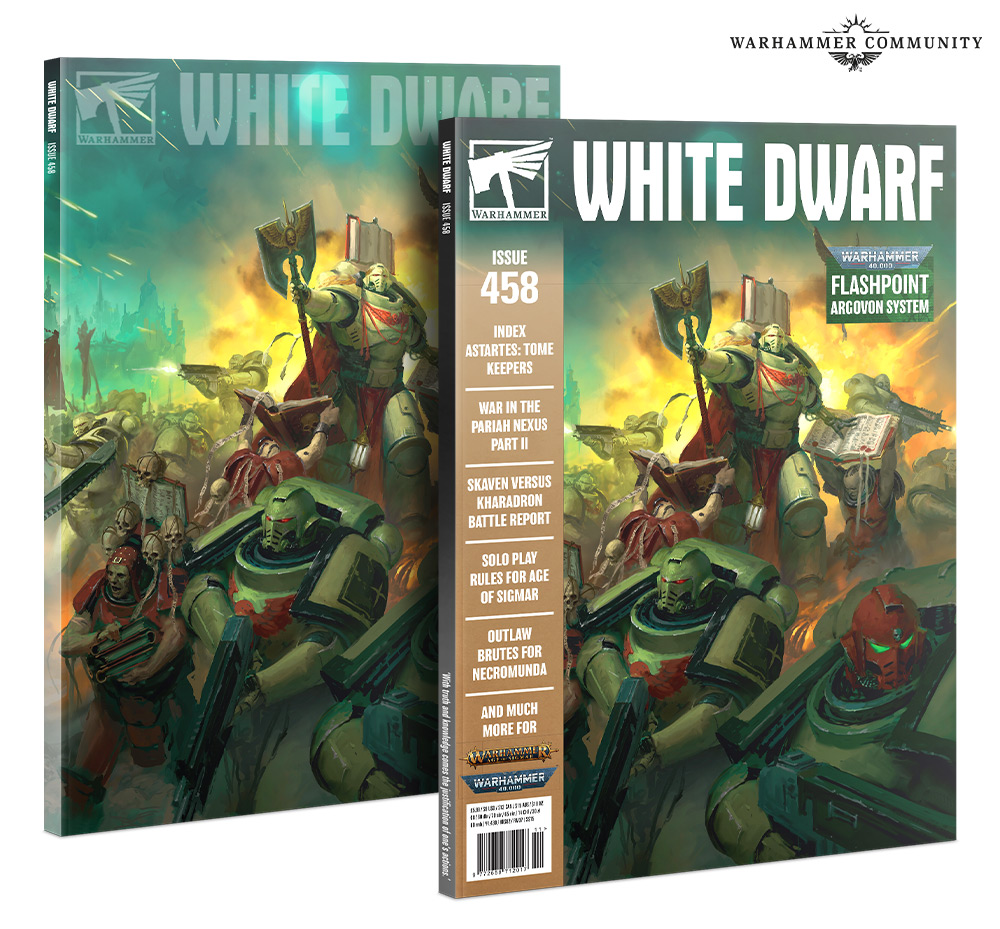 An incredible boxed set, a fantastic new Necromantic Horrors team, and more – what else could you want next week for Blood Bowl? How about a Zoat?! We still have absolutely no idea what they are, but we do know that Zolcath the Zoat is a star Blitzer that adds strength and toughness to any team that he plays for. 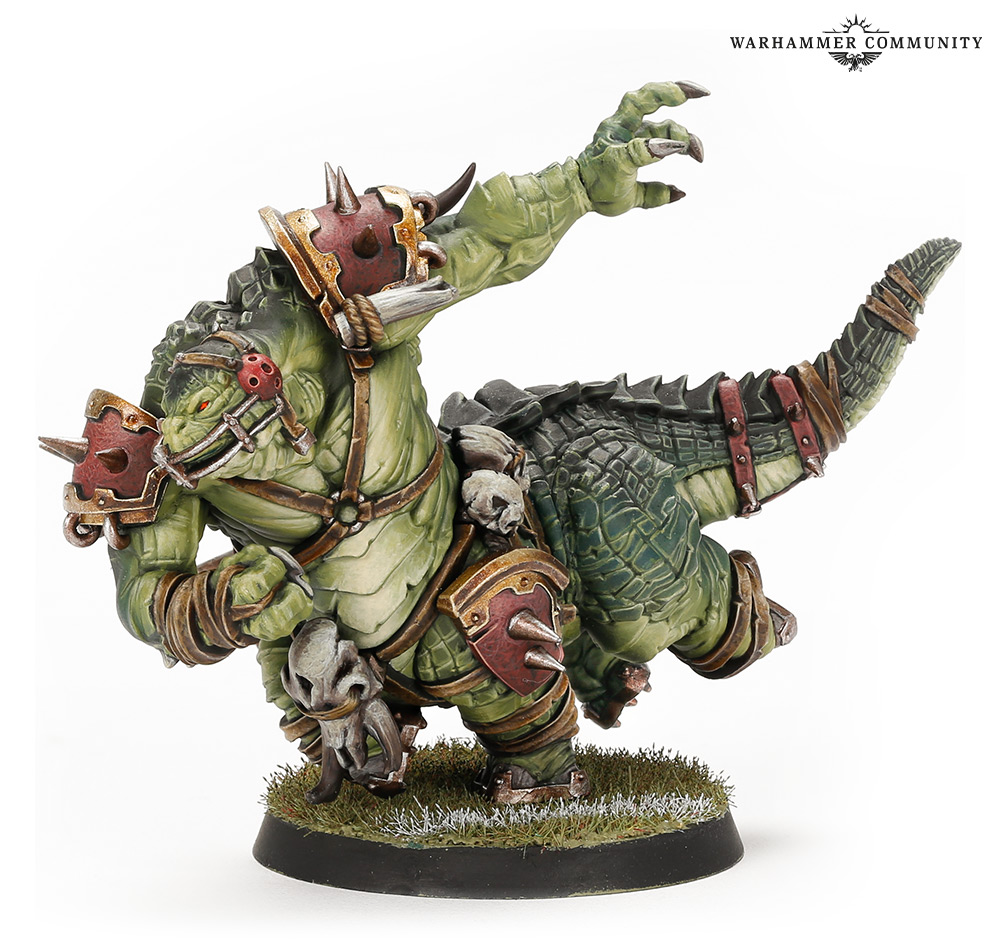 He’ll be available to pre-order on Saturday, along with the rest of the Blood Bowl releases.

Meanwhile, Friday sees two new patterns of Questoris Knight released for Adeptus Titanicus. The Magaera is armed with the destructive lightning cannon, which can obliterate smaller targets and cause damage to larger ones thanks to the Blast and Rending traits. Its sister Knight, the Styrix, is armed with a volkite chieorovile – the perfect weapon for stripping void shields from enemy Titans. Both are armed with a Hekaton siege claw, meaning they can finish off anything that survives their deadly barrages at close range. 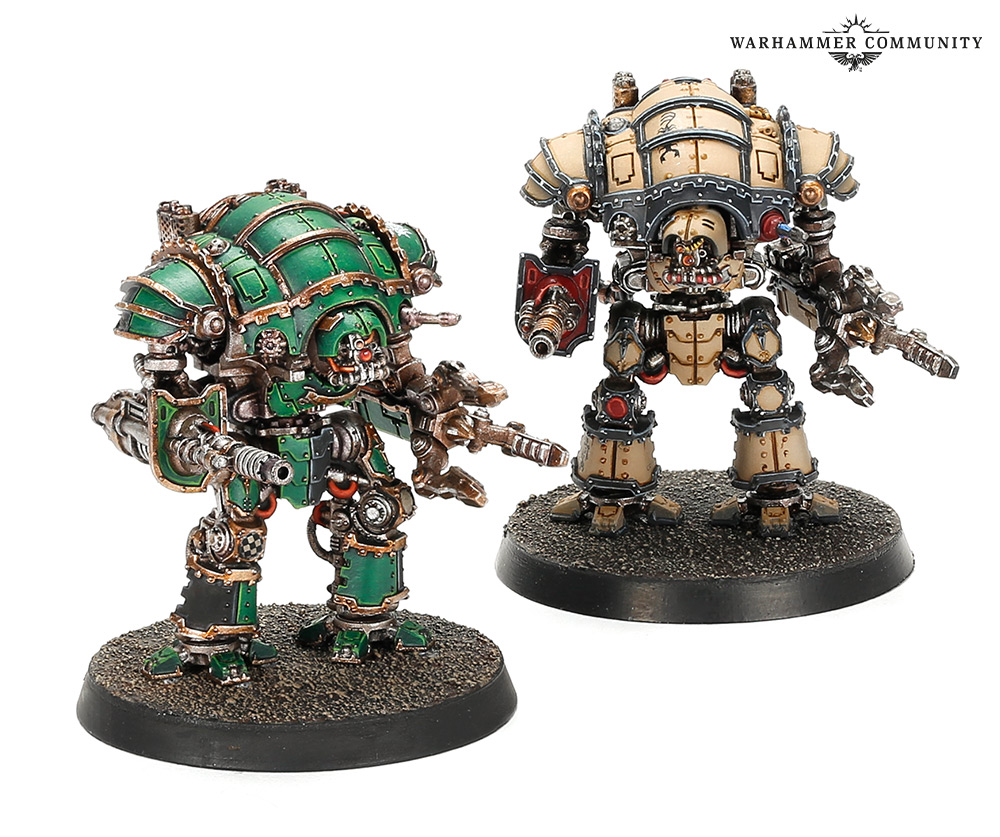 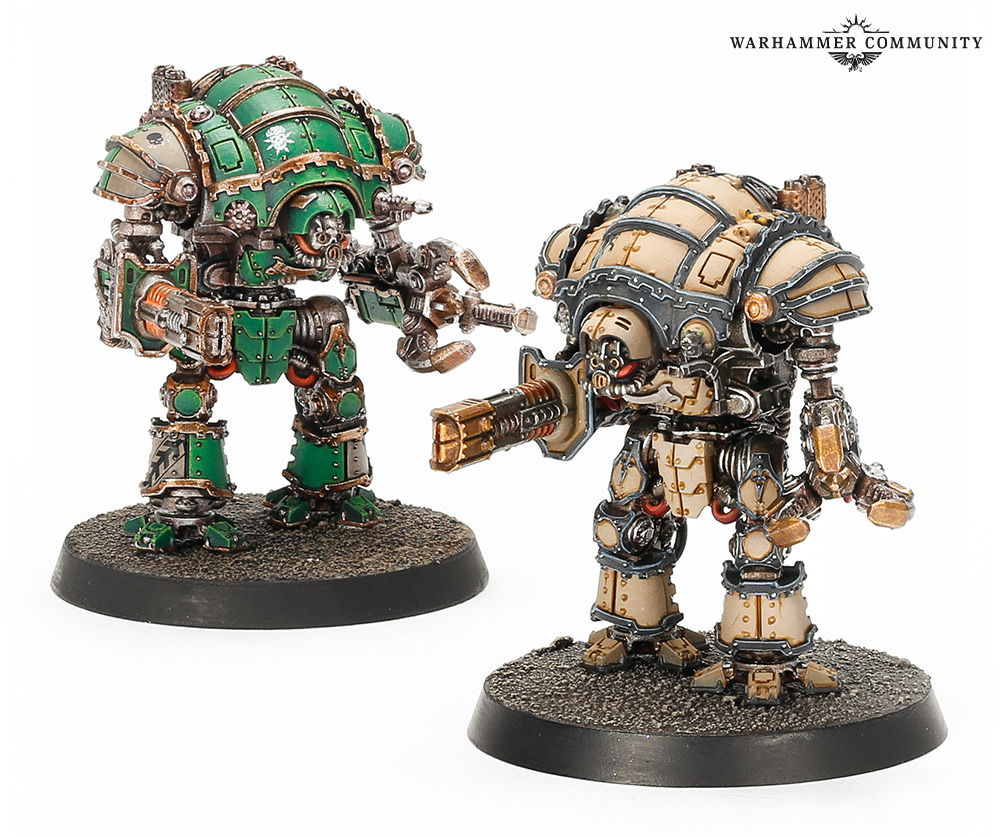 These Knights are also equipped with ionic flare shields, giving them great protection as they quickly move into position. Any Princeps will definitely want to add a Banner of these Knights to their force.