It’s time for The Mortal Realms to get some love this week with this year’s General’s Handbook on pre order for Warhammer Age of Sigmar! Blood Bowl also gets some mixed teams to add some new options to the game! If you would like to support the site then why not order from Element Games and save yourself 20% too! 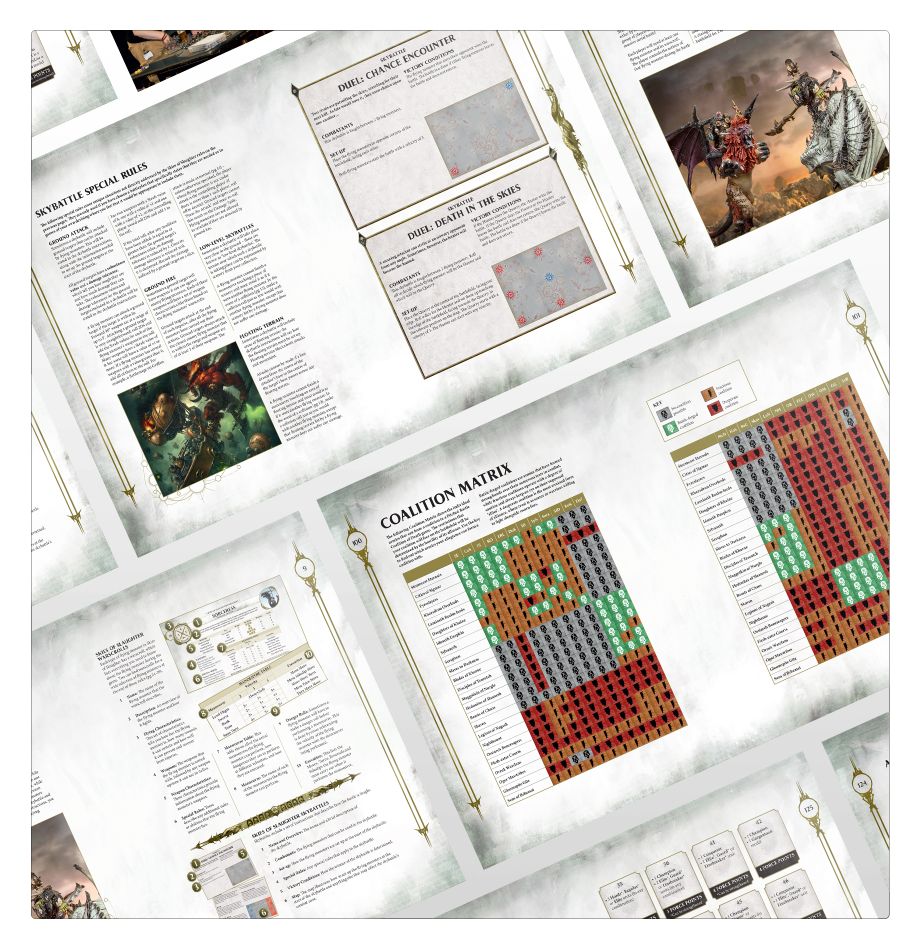 The essential 2020 General’s Handbook updates the core ruleset to enhance your games of Warhammer Age of Sigmar. No matter how you like to play, there’s something in here for you.

The Player’s Code – a set of guidelines to follow, ensuring that each player has a fun and rewarding experience.

New Open Play Rules:
– Skies of Slaughter – Take the fight to the air with high-flying battles amidst the clouds. These rules were previously published in White Dwarf, including five battleplans (called Skybattles), new warscrolls for using flying monsters and engines of war in Skies of Slaughter, and campaigns to link your games together.
– Open War Coalition Battle Generator – Play multiplayer games, with each side split into teams. You’ll fight alongside your teammates to win, but each player also has their own secondary agenda to complete. The new suite of rules and random generator tables will ensure no two games are the same.

New Narrative Play Rules:
– The Whisper Engine – Battle for control of a map in a linked campaign between 4 to 7 players.
– Team Battle Special Rules – Expanded rules let you play games with more than 2 players, specially designed to work with Whisper Engine campaigns – including rules for using a neutral Games Master!
– Coalition of Death – Use the Team Battle rules and this set of 3 battleplans to create memorable multiplayer experiences.
– The Anvil of Apotheosis – Create a bespoke Hero to lead your armies, conquer the Mortal Realms, and carve a name for themselves.

New Matched Play Rules:
– Updated Pitched Battles for the 2020 season – Get guidance on army size, points limits, battlefield roles, allied units, warscroll battalions and more, essential for tournament play.
– 12 Pitched Battle battleplans – Mix up your games with a new set of strategic challenges.
– Meeting Engagements – Play fast, balanced games on small-sized battlefields designed to provide all the thrills of matched play in less than 90 minutes, including six new Meeting Engagement battleplans and suggested tournament rules.
– Pitched Battle Coalition of Death – Play two-on-two games for one-off battles or tournament use.
– Coalition Matrix – This chart breaks down the interaction between all 24 of the existing factions within Warhammer Age of Sigmar. Some armies make for better allies!
– Realm of Battle Rules – Discover rules to represent each of the Mortal Realms in your games, including potent artefacts of the realms and Realmsphere Magic
– Matched Play Auxiliary Objectives – Check out 18 new and updated objectives for the 2020 season.

PLUS:
– Conquest Unbound – Find tournament packs for Pitched Battles, Meeting Engagements, Coalition of Death, and Team Format Battles.
– Open War Army and Terrain Generators – Challenge yourself with a randomly generated army on a randomly generated battlefield! Let the story write itself.
– Pitched Battle Profiles – This separate, 32-page booklet contains pitched battle points values, unit sizes and battlefield roles for the units you can use in games of Warhammer Age of Sigmar, as well as scenery, endless spells, Compendium and Forge World models. 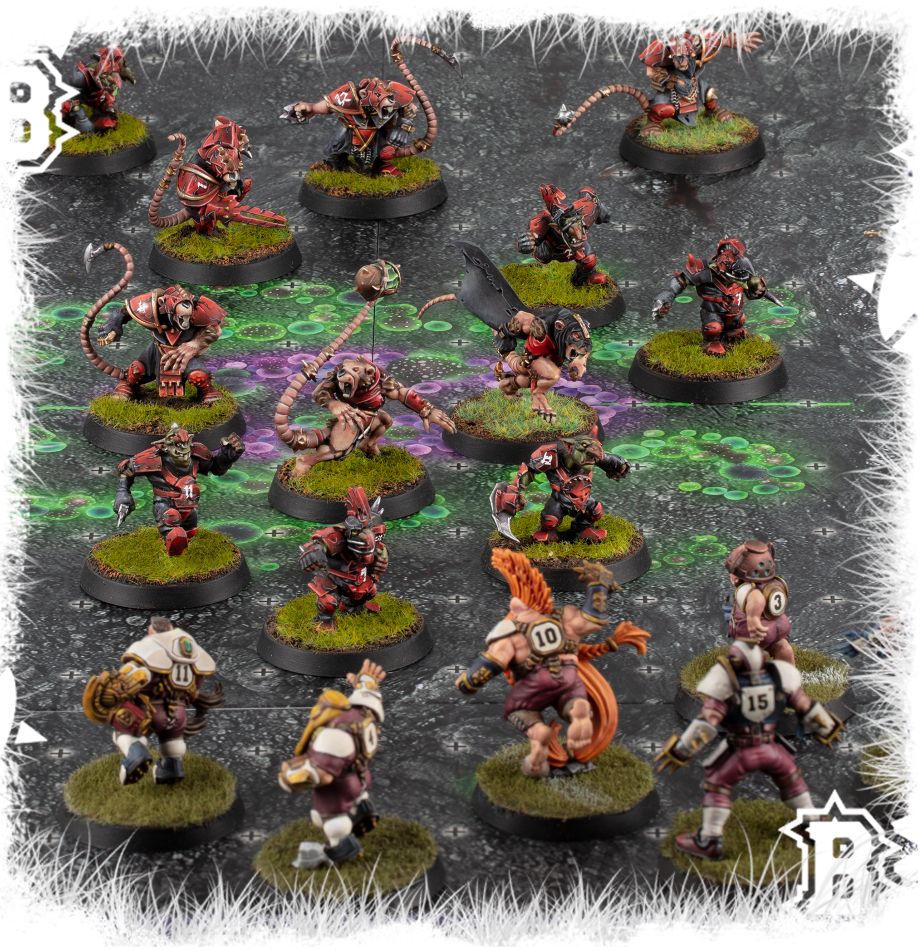 Mixed hybrid teams are legal again under NAF rules, formed from a mix of different races and cultures. Skaven and Goblin teams are affectionately called the Underworld Denizens, and the Underworld Creepers are one of the most popular examples. The combination of players from both races joins the best of both worlds, spawning new strengths and eliminating old weaknesses to create something greater than the sum of its parts.

Goblin and Skaven players have little in common besides their size and subterranean homes, but as a team they can put together a winning combination of positions and players. They’re a lot of fun to play and you’ll enjoy a dizzying variety of fresh tactics and plays, whilst keeping your opponents on their toes. 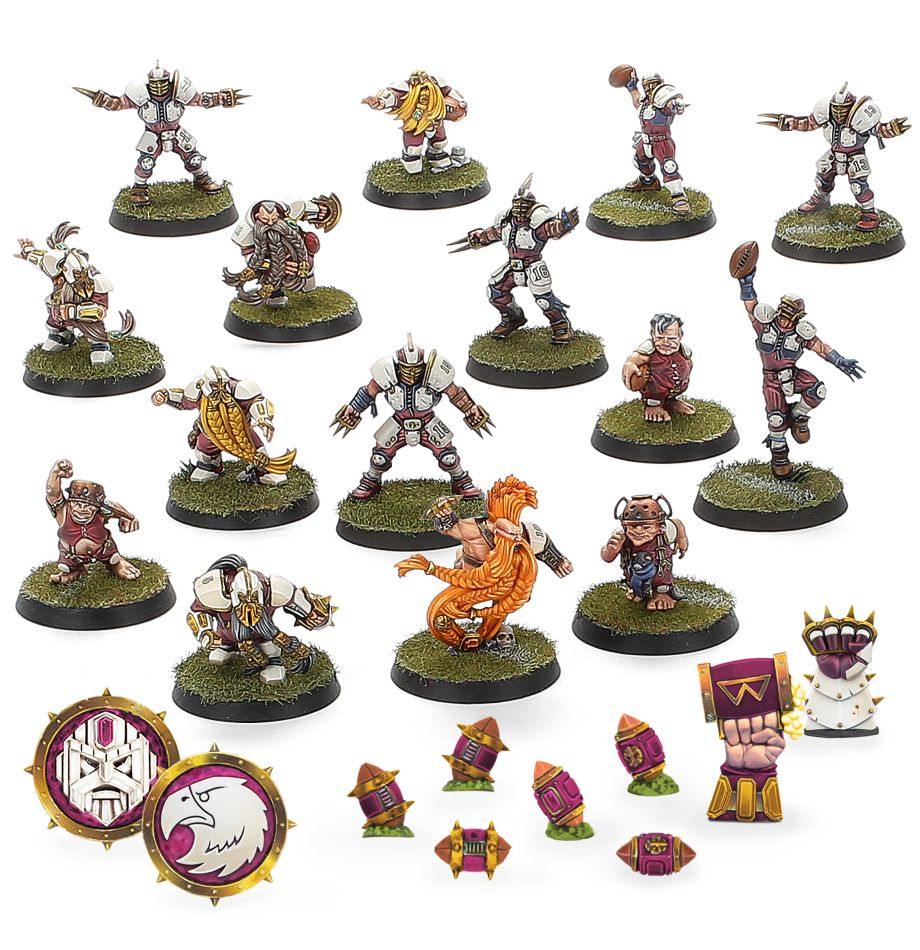 Mixed hybrid teams are legal again under NAF rules, formed from a mix of different races and cultures. The great cities of the Old World have produced some fantastic teams, and the Middenheim Marauders are an excellent example. The combination of Human, Dwarf and Halfling players creates new strengths and eliminates old weaknesses to forge something greater than the sum of its parts.

Old World Alliance teams are assembled from players across a variety of races and cultures, united by the place they call home. Each of them brings their own skills – Human flexibility, Dwarf toughness and strength, and Halfling, er… greasy slipperiness and cooking skills. If you’re looking for challenges as well as tactical opportunities, look no further than the Middenheim Maulers. 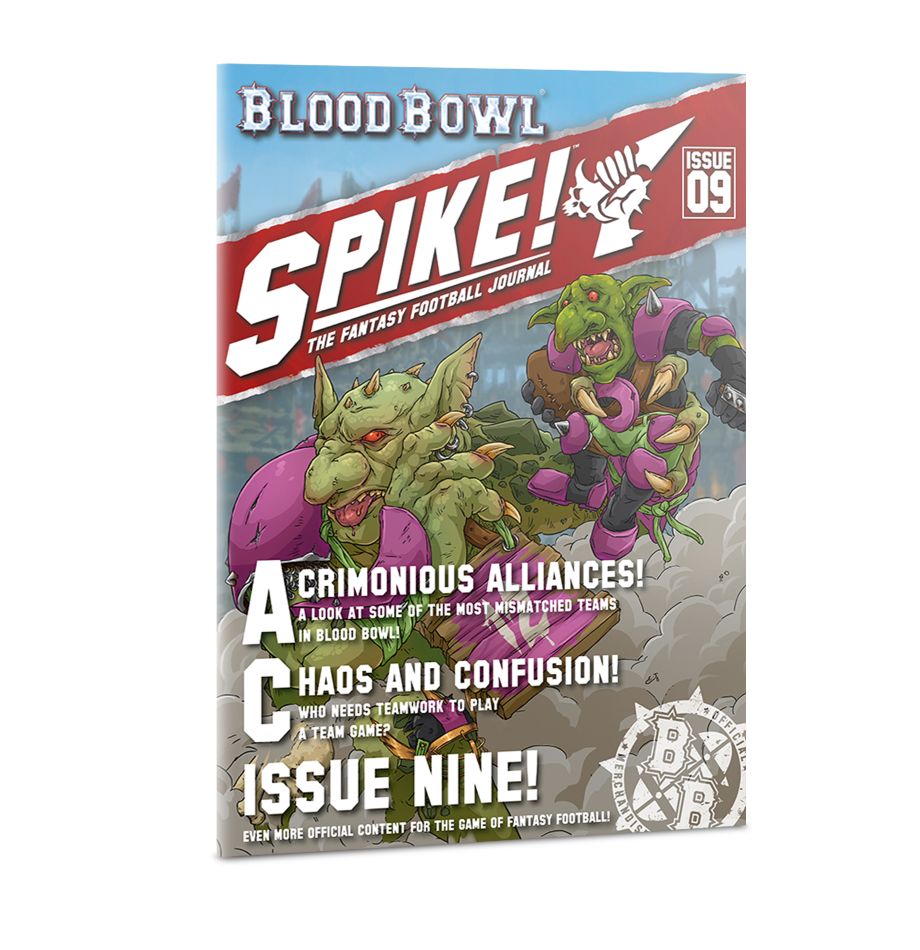 Stephan Half-Elf is our (very appropriate) guest editor for a very special issue of the dedicated Blood Bowl background and rules magazine, Spike! Journal. He takes a look at something rather unusual – mixed teams that combine players from different races and cultures into something altogether new! Find out how they get along (or don’t), how to build your roster and achieve victory on the gridiron.

This issue’s format may be different, focusing on three teams instead of one, but you’ll still find everything you need to play as one of three new types of hybrid teams!

– Misfits and Malcontents: lore and rules for Chaos Renegade Teams comprised of renegades from nearly every race and background. You’ll also find background on famous teams like the Chaos All-Stars and a full profile of the Mongrel Horde.

– Renegade Playbooks: offers some insight into playing incredibly diverse teams, and building them up over time to suit your play style.

– Star Player Spotlight: Ugroth Bulgrot, “The Other Ripper”. Not to be confused with Ripper Bulgrot, Ugroth eschewed hard work and training to cash in on the chainsaw craze.

– Dirt from the Dugout: Mindy Piewhistle returns to dish about why you don’t see many Elves in mixed company, let alone mixed Blood Bowl teams.

– Underground, Overground, Sportsmanship Free: The term Underworld Denizens covers teams made up primarily of Goblins, Trolls, and Skaven. You’ll find a full breakdown of lore, rules, and a profile of the Underworld Creepers!

– The Quick and the Cowardly: An Underworld Denizens team includes quite an unusual mix of players, but they can be a blast to play. Read up on some tips to make the most of them.

– Star Player Spotlight: Glart Smashrip is a truly fat rat. Inspired to out-bulk a famous Minotaur player, Glart throws his weight around on the pitch with deadly results, earning a foul reputation alongside an impressive record.

– Chat with the Rat: Hackspit Quillchewer digs deep to uncover the ugly truth about mutations in Skaven society.

– Allies of Inconvenience: Teams of the Old World Alliance are formed from the natural admixture of civilised (relatively) Humans, Dwarfs, Halflings and Ogres in some of the great cities of the Old World. You’ll find riveting background on famous teams, plus a dedicated profile of the Middenheim Maulers.

– Old World Style: At once tough, versatile, hard-hitting, and slippery, these teams seem to have it all. Our experts break down the options to help you build a winning combination.

– Star Player Spotlight: Helmut Wulf was one of the first players to pick up a chainsaw, and he remains one of the best.

– Mixed Fortunes: a smorgasbord of Star Players hailing from a variety of races and backgrounds, who are attracted to the motley nature of mixed teams by their very misfit nature.