I’m currently working on a 30k/40k Blood Angels cross over project for a little slow burn Sprues and Brews project. Between us we’re trying to build a few different Horus Heresy armies so that we can play through some Siege of Terra missions later in the year.

I’ve picked the Blood Angels as one of my armies, but I have to say I don’t think I can bring myself to build and paint any more ‘non-primaris’ scaled marines. So I’ve decided to convert the different IXth Legion units (the Dawnbreakers, the Angel’s Tears etc.) using a combination of 30k/40k components.

I’ve started with the Dawnbreakers, the idea being that I can use these to represent Dawnbreakers in my 30k games and Sanguinary Guard in my 40k games. I need to add a couple of spears to the unit eventually once everything gets back to normal and I can get hold of some components :).

I thought I’d also share a short guide on how I managed to build my Primaris Scale Sanguinary Guard in case there are any other fellow Blood Angels fans who want to try themselves. Full credit for the idea goes to the fellow hobbyist in the Blood Angels Facebook Group.

For each model you will need the following components :-

The trickiest bit of this conversion is the torso, so let’s start with that. Begin by glueing the two halves together as normal.

Once the glue has dried you will need to take a set of clippers and clip the ‘Aquila’ collar from the rear of the torso. You can use the clippers to get most of it off and then a hobby knife just to level it all (see below)

To finish up this step you will need to trim a little bit of an angle/slope off the back of the collar inbetween the exhaust vents. This will allow the jet back to attach correctly in a later stage.

In the next step you will need to slice a bit of the rear torso off. You are looking to remove the protuding exhaust vents and create a flat surface on the rear of the torso to which you can later attach the jet pack. The image below shows the result you are aiming for, you may need to go back with your hobby knife and carefully level it all out. PLEASE BE CAREFUL 🙂 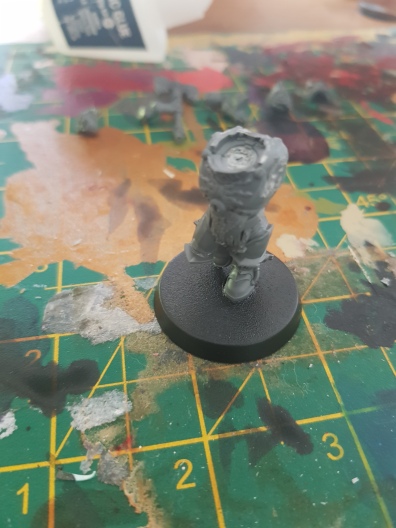 Now it’s finally time to add some Blood Angels bits to turn this model into a true Son of the Angel.

Start by taking the Sanguinary Guard weapon and arm set of your choice and attach them to the model. Play around with the position before you glue them, for some of the weapon and arm sets you may need to bring them a bit further forward to fit over the larger torso – you can hide any gaps or wierd looking shoulder joints with the shoulder pads later on.

Once you’re happy with the position of the arms you can glue on the Sanguinary Guard head, shoulder pad and jet pack.

The last step is to attach the Sanguinary Guard wings. My advice though is to leave these on the sprue and paint them and the model itself up separately. Once you are ready to attach the wings they should fit nicely to what remains of the Custodian Guard torso exhaust vents as shown below – I’ve used blue tac but you should use glue 😀

And that’s it, now you have yourself some Primaris scale Sanguinary Guard (which I’ll also be using to represent Dawnbreakers in 30k games :D)

I’ll leave you with one final image showing how they compare in scale to a Primaris Marine.

Thanks again to the hobbyist in the Blood Angels Facebook group for the idea!