Today the first stand alone kits in the new Sisters of Battle range are up for pre order including Codex Adepta Sororitas! If you would like to support the site then please order from Element Games! It keep the site running, and saves you money too! 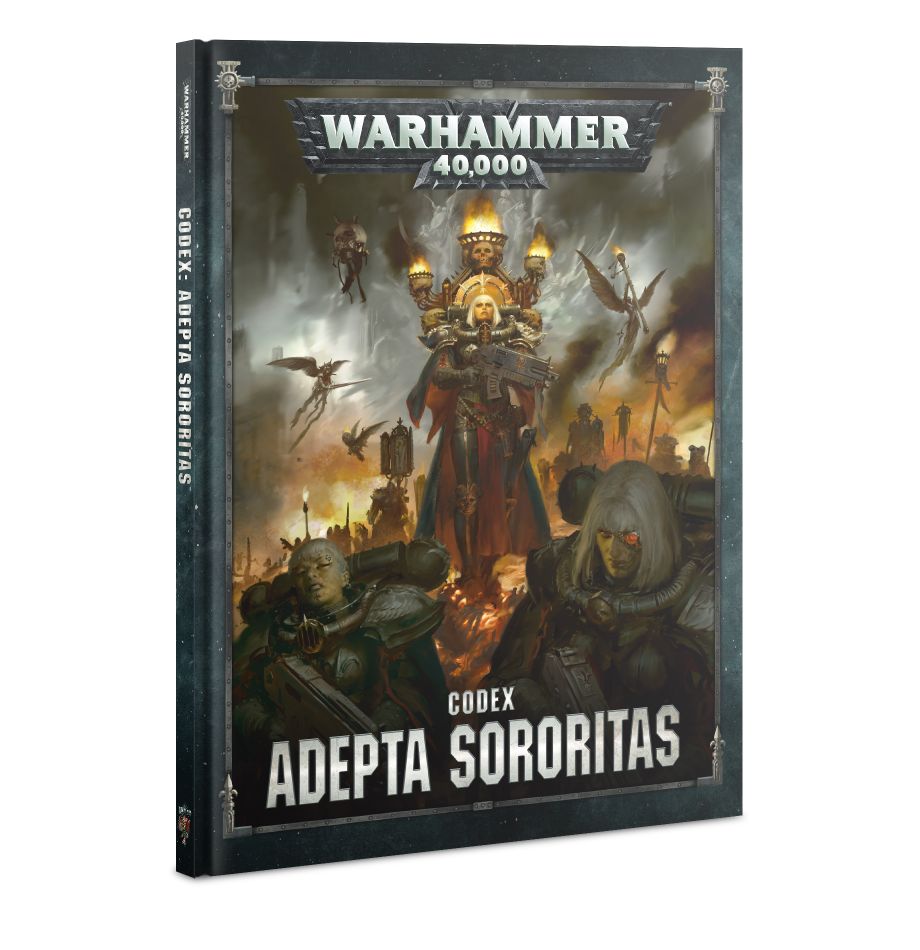 The Adepta Sororitas are the military arm of the Ecclesiarchy, taking the fight to the faithless with holy fire and fury. Inside this 112-page hardback codex, you’ll find everything you need to field the valiant Sisters of Battle, plus thrilling lore and art to inspire your own collection.

Inside this book, you’ll find:
– The history of the Adepta Sororitas, with a look at how these holy warriors annihilate the enemies with bolter, melta and flamer
– An Adepta Sororitas bestiary with background details for every unit and Character featured
– A showcase of stunningly painted Citadel miniatures
– Rules for Adepta Sororitas units that are available to every Order
– Stratagems, Warlord Traits, Order Convictions and Relics of the Ecclesiarchy that define the ways that the Adepta Sororitas wage war
– And more!

You will need a copy of the Warhammer 40,000 rulebook to use the rules included in this codex. 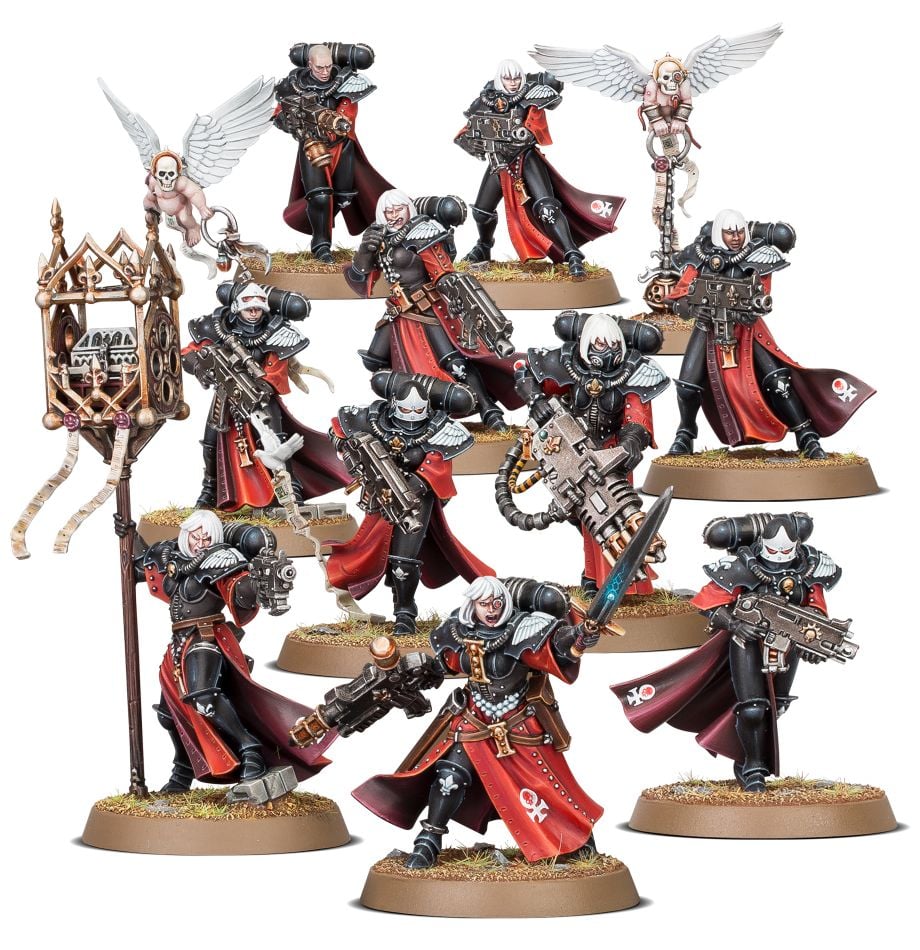 The Battle Sisters make up the vast majority of each of the Orders Militant, gunning down heretic, xenos and traitor alike with their holy trinity of weaponry – bolter, melta and flamer. They are the foot soldiers of the Emperor, his sword of defiance and his shield indomitable. Beneath their thundering bolters countless aliens, mutants, traitors and heretics have met their doom. Wherever they advance across the battlefield the light of the Emperor spreads like a holy dawn, manifesting in miracles that see the bolts and blasts of the enemy turned impossibly aside or the foe consumed by the fires of righteous retribution. Onwards the Battle Sisters march, their exultant prayers ringing out all the more stridently at these breathtaking proofs of the Emperor’s manifest divinity, and with every squeeze of their triggers they despatch more of the unworthy abominations that dare stand against the Master of Mankind.

This kit builds 10 Battle Sisters and 1 Incensor Cherub. The Battle Sisters are equipped with boltguns, though up to two of them can be assembled with a special weapon (storm bolter, meltagun or flamer). Alternatively, one Battle Sister may carry a special weapon while another bears a heavy weapon (heavy bolter or heavy flamer). One of your Battle Sisters can carry a sacred Simulacrum Imperialis, with two variant options mounted atop the pole. The components also enable you to build a Sister Superior armed with a chainsword or power sword and a choice of ranged weapons, including a condemnor boltgun or combi-weapon (combi-flamer, -melta or -plasma).

This set is supplied in 179 plastic components and contains 10x Citadel 32mm Round Bases and 1x Citadel 25mm Round Base. An Adepta Sororitas Transfer Sheet is also included. 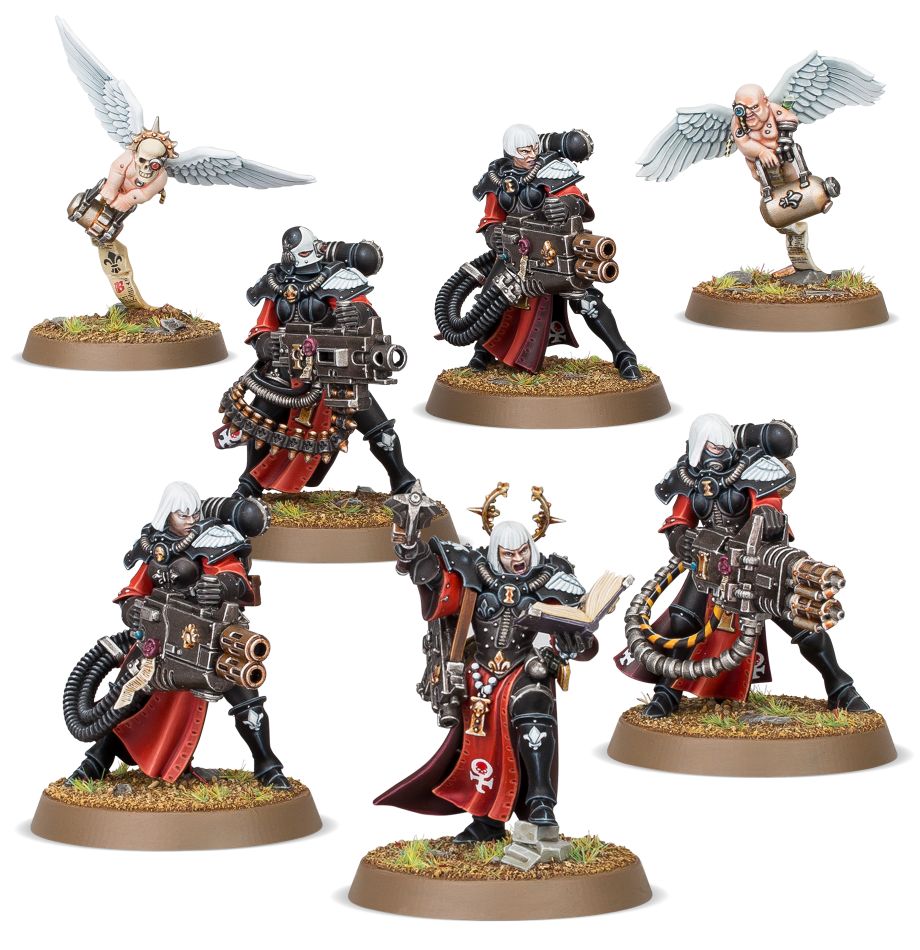 Among the majority of the Orders Militant it takes long years to advance to the respected ranks of the Retributor Squads. The Sisters that comprise these warrior bands are amongst the most level-headed, imperturbable and bloodily determined of all their kind. They are also amongst each Order’s finest sharpshooters. It is well that all of this is so, for to the Retributors falls the weighty responsibility of providing targeted fire support for their advancing Sisters. In order to best fulfil this role, each squad of Retributors is armed with an array of heavy bolters, multi-meltas and heavy flamers that bring their firepower in line with that of a battle tank. Combined with the Sisters’ expert eye for target prioritisation, identifying enemy weak points and optimising firing solutions, these devastating armaments make each squad of Retributors a terrifyingly potent battlefield asset.

This kit builds five Retributors and two Armorium Cherubs. The Retributors can be assembled with your choice of heavy bolter, heavy flamer or multi-melta (two of each weapon are included in the set), while the Retributor Superior can be armed with a variety of ranged and melee weapons.

This set is supplied in 115 plastic components and contains 5x Citadel 32mm Round Bases and 2x Citadel 25mm Round Bases. An Adepta Sororitas Transfer Sheet is also included.

The Triumph of Saint Katherine 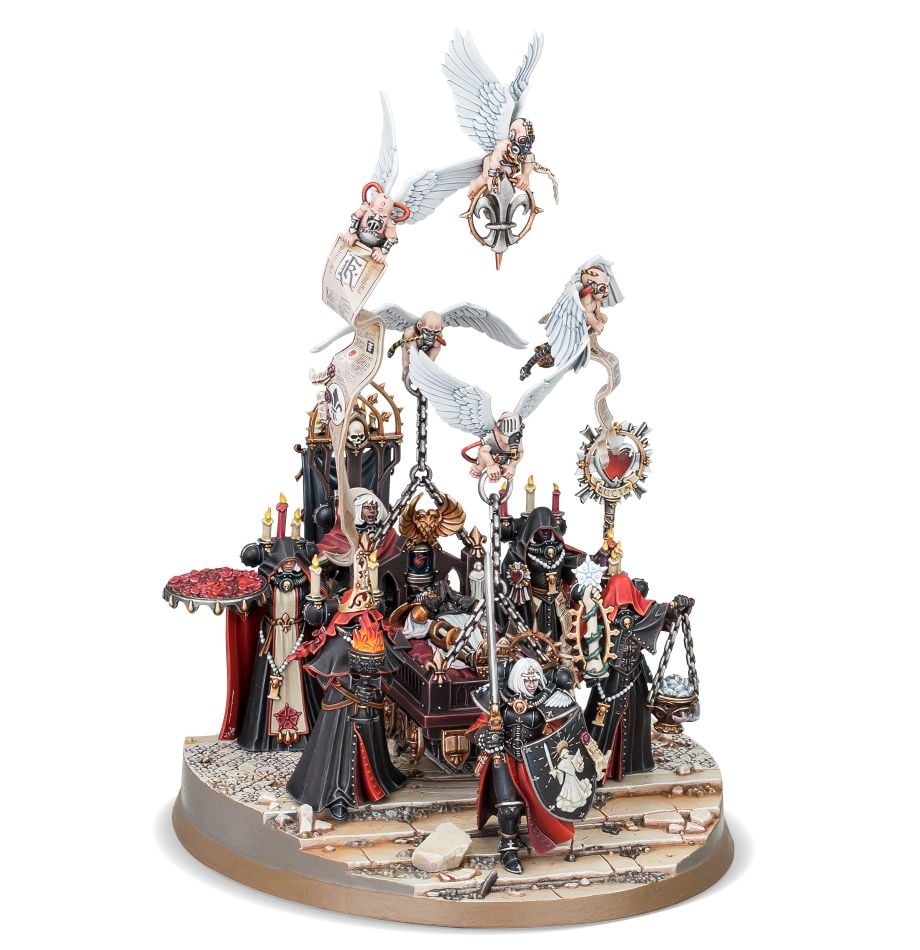 Where the Triumph of Saint Katherine marches, there shines the Emperor’s radiance. With every step, this funerary procession spreads the glory of the martyred Matriarch further across the galaxy, scattering before it the enemies of the faith and instilling in the Sisters of Battle the fiery conviction of Katherine herself. Yet it is not only the founder of the Order of Our Martyred Lady who is venerated by the Triumph, for through its presence are the spirits of all six Matriarchs carried to the front lines.

Accompanying the blessed bier that bears the skeletal remains of Saint Katherine within her reliquary armour are six members of the Orders Pronatus. Each of these handpicked exemplars of the Adepta Sororitas embodies one of the canonised Matriarchs of the six original Orders:

This set is supplied in 85 plastic components and contains a sculpted Citadel 120mm Oval Base. 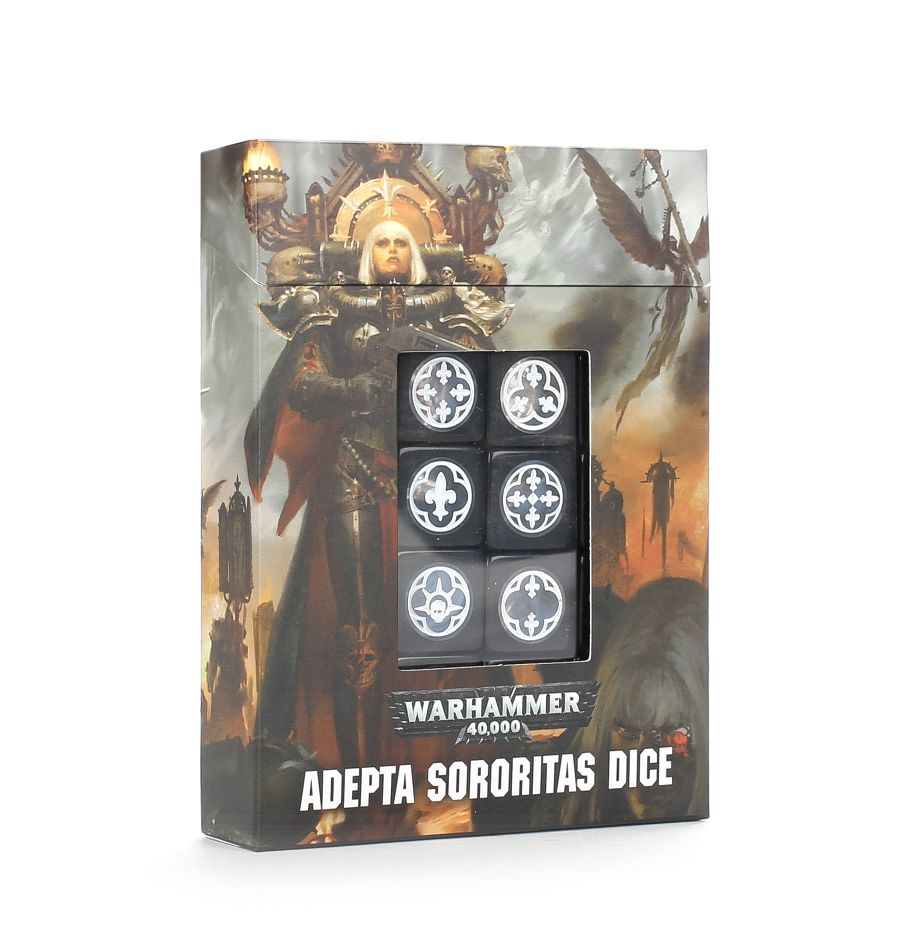 Show your allegiance to the holy Adepta Sororitas with their own dice set! These 20 dice are cleverly designed to appear as stained glass windows, and each feature a large fleur-de-lys icon in place of a 6 and a haloed skull icon in place of a 1. In addition, instead of traditional pips on each dice face, the numbers are indicated by white fleur-de-lys. 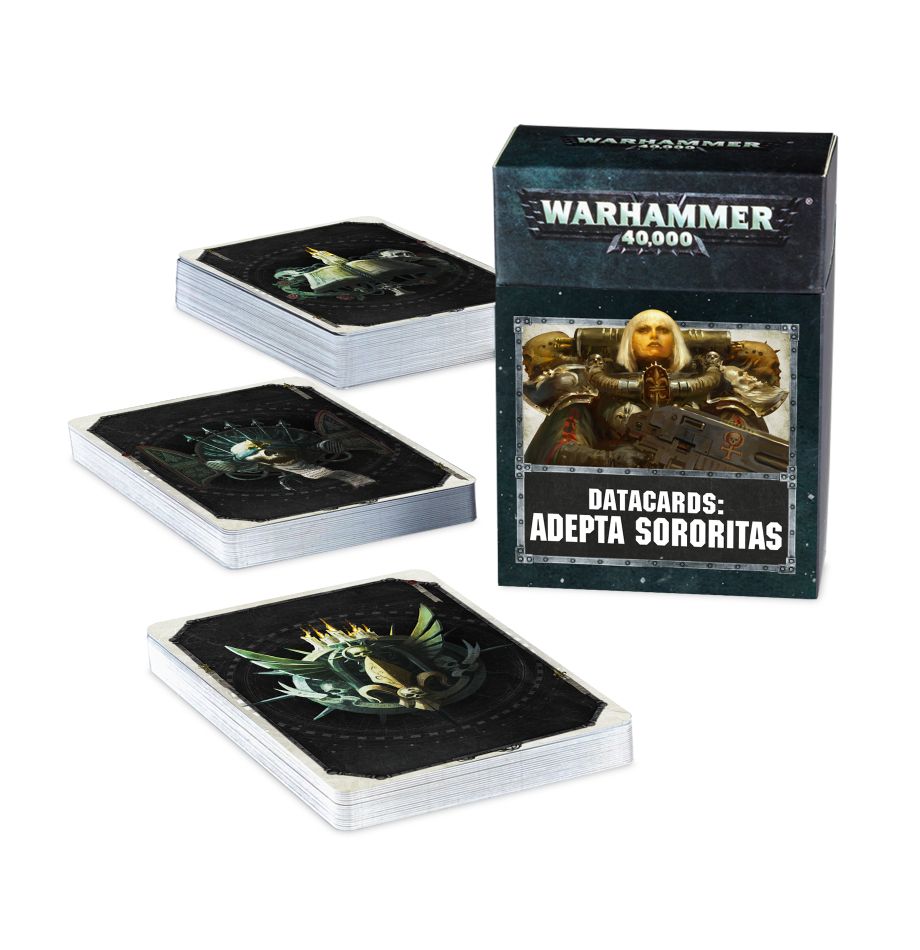 This set includes the following cards:

You will need a copy of Codex: Adepta Sororitas and the Warhammer 40,000 rulebook to make full use of these cards.