Wow, we have another bumper week of pre orders today! Underworlds, Titanicus and Middle Earth along with a host of Made to Order stuff too! To help support the site (and save yourself 20% too!) don’t forget to order from Element Games 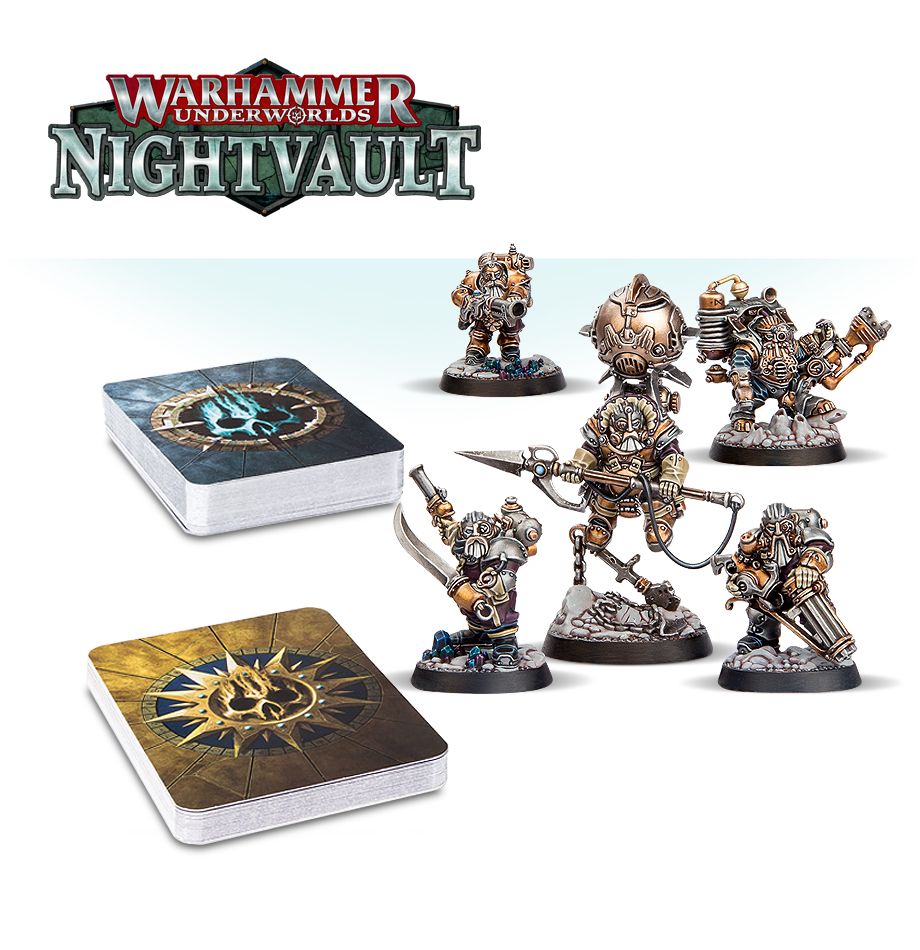 Bjorgen Thundrik and his crew of skyfarers were not the first among the Kharadron Overlords to search for Shadespire. The whispered rumours of the Katophranes’ treasures had reached many sky-ports, but those expeditions that were sent either returned empty-handed or did not return at all. With a hardy crew and a magnificent skyvessel at his command, Thundrik set out to achieve what all others had failed to do.

This warband expansion allows you to add Thundrik’s Profiteers to your games of Warhammer Underworlds. A set of snap-fit models in coloured plastic allow you to get your warband battle-ready, fast, while a set of fighter cards making keeping track of each individual member simple. Build deadly decks for Thundrik’s Profiteers using 29 warband specific cards, and expand your library with 31 powerful Universal cards only found in this set. 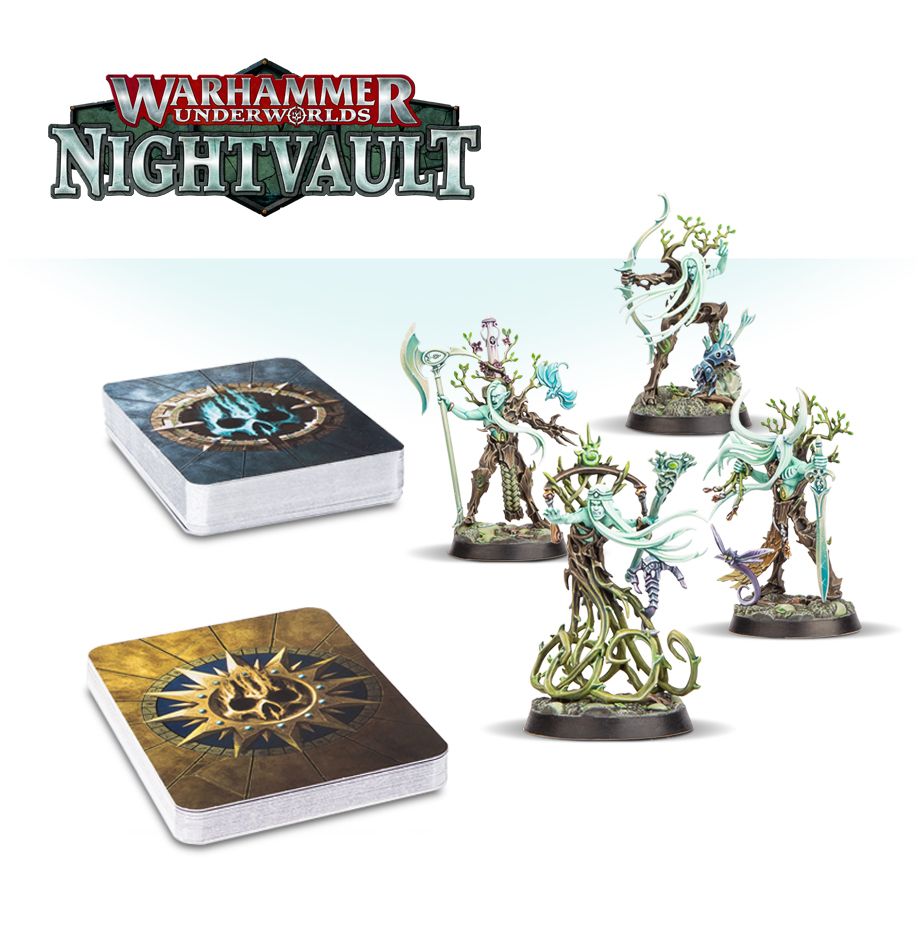 With the advent of the necroquake, the life magic of Alarielle has been able to seep through cracks in reality back into Shadespire. Some of the Sylvaneth trapped there have stirred once more, with Ylthari and her Guardians being the first to awaken. Imbued with bountiful vigour and wrath, they seek the lost soulpods of their fallen kin.

This warband expansion set allows you to add Ylthari’s Guardians to your games of Warhammer Underworlds. A set of push fit models in coloured plastic allow you to get your warband built and ready for gaming in mere minutes, while fighter cards let you keep track of their stats mid-game. You’ll be able to harness the unique tactics of Ylthari’s Guardians with 29 warband specific cards, including objectives, upgrades and ploys. Meanwhile, 31 Universal cards give you new options for customising your deck whichever warband you play. 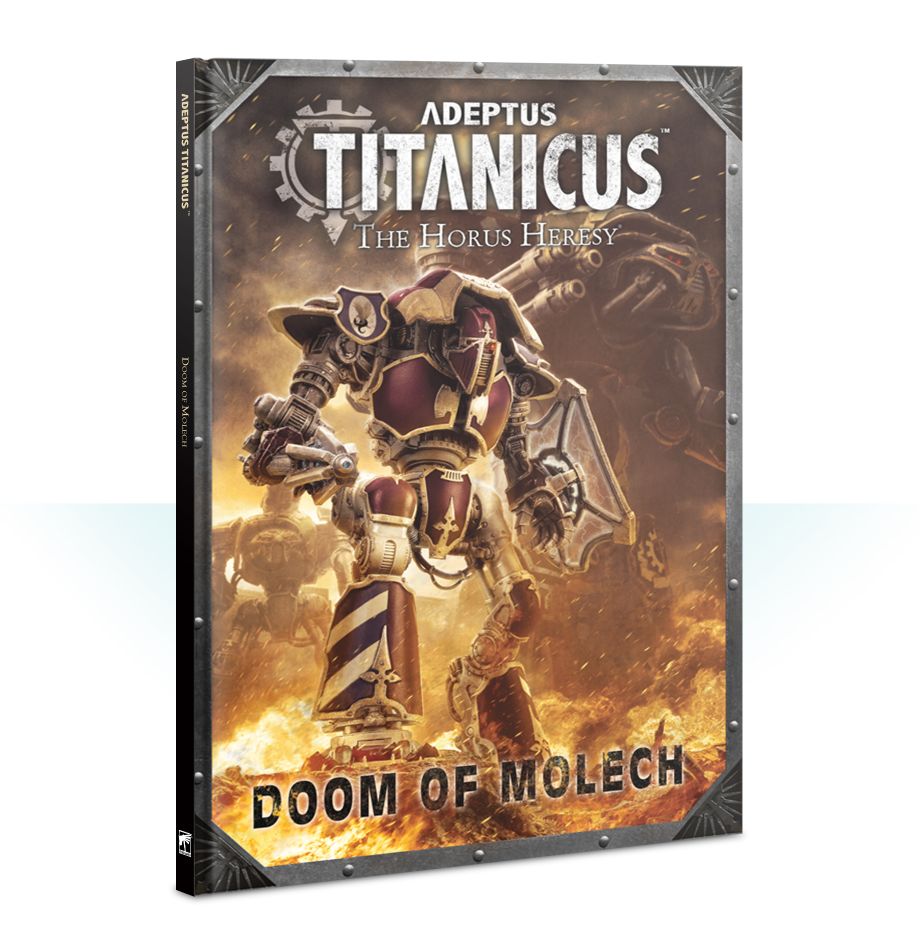 The Battle of Molech was a turning point in the Horus Heresy. After an overwhelming initial assault by the Warmaster’s forces, small bands of brave Loyalists held out for months. But the insidious influence of Chaos spread through Molech’s defenders, and the Knights of House Devine turned against their allies, securing victory for Horus and bringing powerful new allies to his forces. And in the battle’s aftermath, Horus walked his own path to a source of great power that would change the face of the war forever…

This Adeptus Titanicus: The Horus Heresy expansion introduces the background of the Molech campaign. It also provides a wealth of new rules and missions to use in your games, including new maniples, Legion rules and everything you need to use entire armies of Knights, including rules for seven different Knight Households.

– An overview of the Battle of Molech
– Rules for fielding battlegroups composed entirely of Knight Households
– New orders, Stratagems and more for Knight battlegroups
– Background and Legion-specific rules for 4 Titan Legions: Crucius, Fortitdus, Vulcanum and Interfector
– Background and rules for 7 Knight Houses: Devine, Donar, Indra, Kaska, Kaushik, Mamaragon and Tazkhar
– Full-colour examples of paint schemes and heraldry
– New maniples to use in your games
– 32 new Stratagems and 2 Battlefield Assets
– Six narrative missions based on the greatest battles of the Molech campaign
– Beast Hunt matched play mission, including rules for three different beasts
– Rules for fighting on battlefields based on conditions on Molech 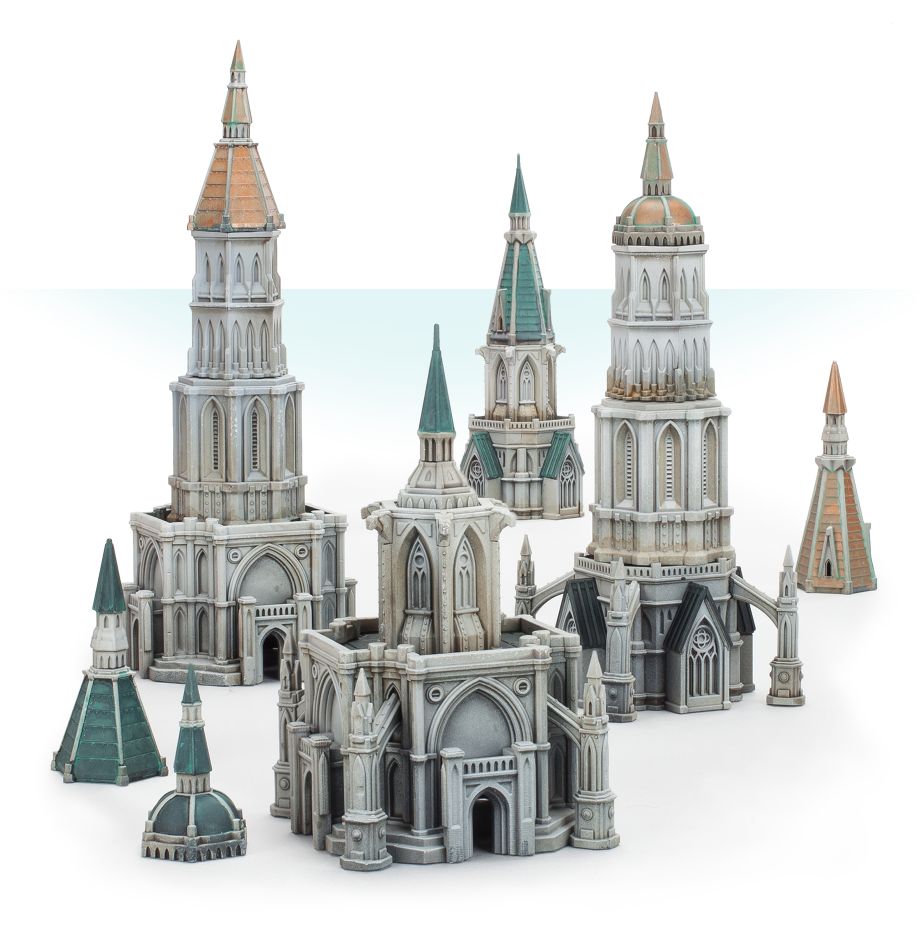 Even in the enlightened days of the 31st Millennium, many worlds of the Imperium favoured a Gothic aesthetic in their cities. Towering spires encrusted with gargoyles, domed roofs and vaulted windows featured heavily in their construction, lending Mankind’s settlements a distinctive look and feel.

Add this Gothic aesthetic to your Adeptus Titanicus scenery with a set of buildings reflecting this style of Imperial architecture. The components in this set are modular, and can be configured and stacked in a variety of ways. Create multiple small buildings, several medium structures or a single large tower that can even hide a Battle Titan.

This set includes two plastic sprues, each of which can construct two complete buildings or be used to make a variety of larger or smaller structures. The 104 components are also cross-compatible with other Adeptus Titanicus Civitas Imperialis building kits to create a wider variety of scenery to use in your games. 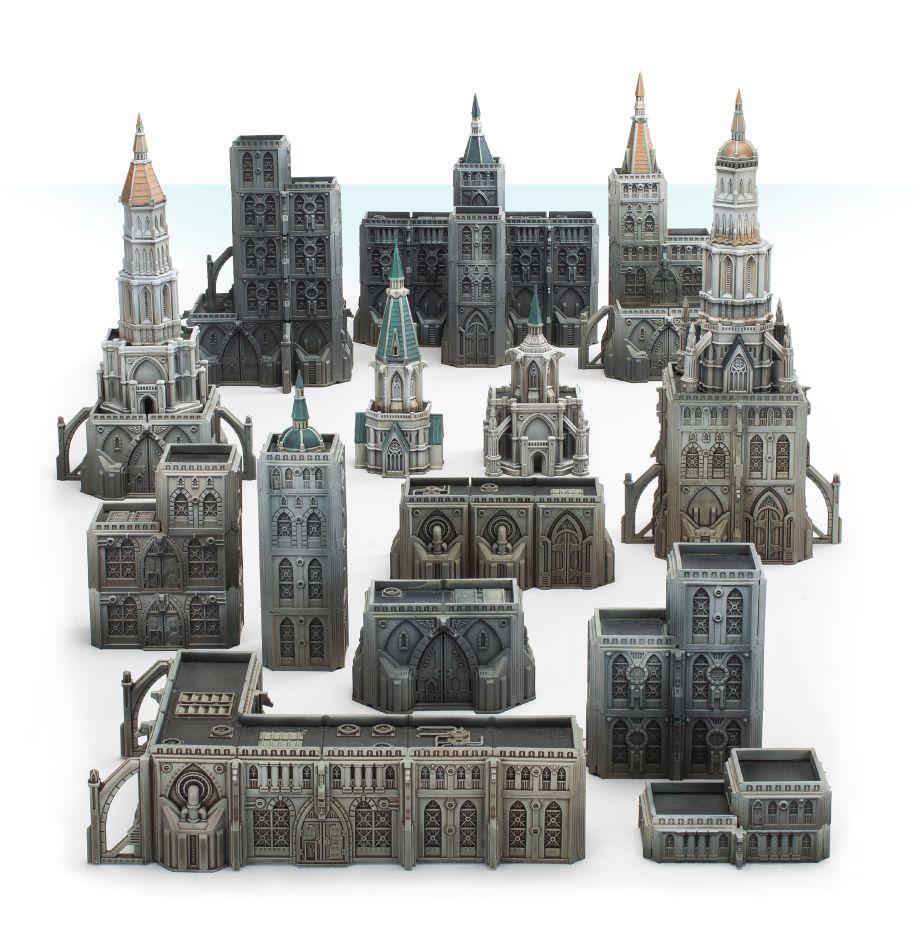 Across the war-wracked Imperium, cities large and small are devastated by battling Titan Legions. Amidst towering spires and sprawling hab-blocks, the god-machines fight for supremacy and survival.

Create your own cityscape for your games of Adeptus Titanicus with a huge array of plastic scenery. With the contents of this kit, you can construct a wide variety of buildings, from single-storey structures to immense domes and spires that can tower above even a Warlord Titan. However you want your battlefield to look, this set is the perfect starting point.

Inside this kit you’ll find 18 plastic sprues packed with parts to create scenery for your Adeptus Titanicus battlefield. This includes: 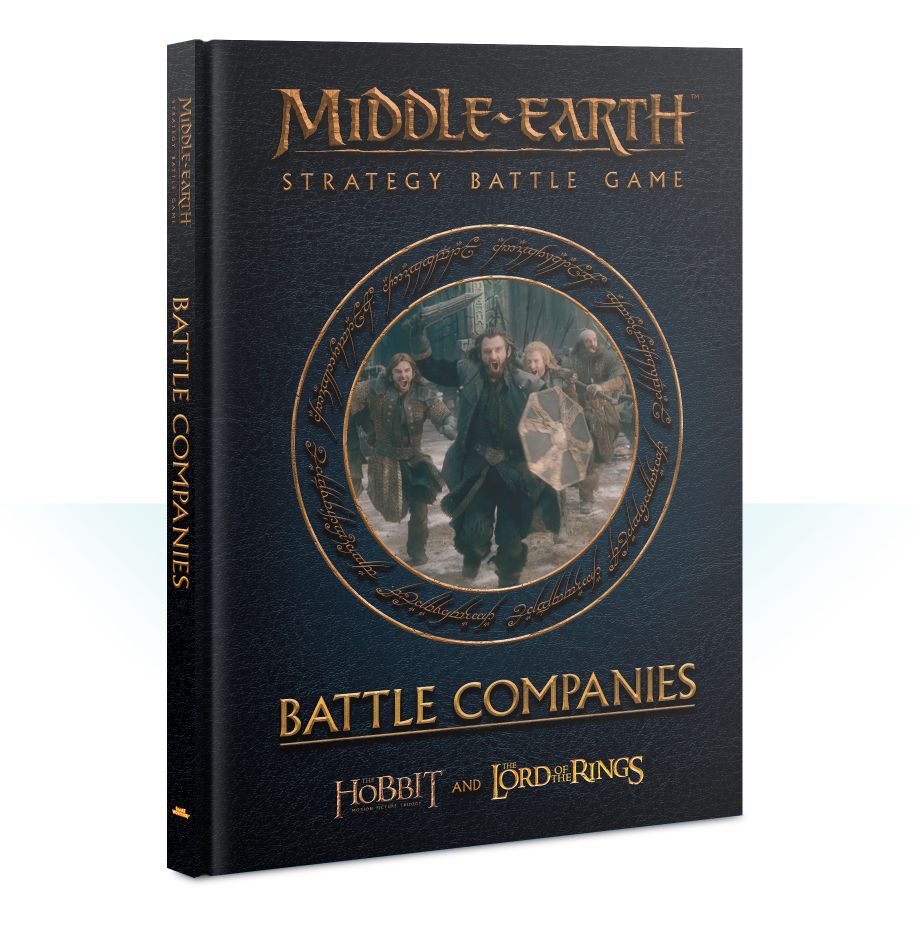 Battle Companies is an expansion to the Middle-earth Strategy Battle Game that enables you to assemble small groups of Warriors that, over the course of several games, will progress and develop into your own unique warbands. Create your own Heroes and Villains of Middle-earth, and forge them into legend through the deeds they perform on the battlefield.

This book contains all of the rules for playing games of Battle Companies, including a host of races and factions, wargear upgrades, equipment options and much more.

– 38 different Battle Companies from all corners of Middle-earth, each with their own special rules, advancements and abilities
– Full rules for advancing the members of your Battle Company, including progression charts, injury tables, armouries and more
– Eight bespoke paths for your warband’s Hero to follow as they progress in experience
– 18 Matched Play Scenarios specially formulated to be played using two opposing Battle Companies
– Two different campaigns (narrative and map-based)
– Additional rules for using your Battle Company in larger games with the rest of your collection

This expansion supports both The Hobbit™ and The Lord of The Rings™, incorporating the Citadel and Forge World miniatures ranges. You will need a copy of the Middle-earth Strategy Battle Game Rules Manual to use this expansion, as well the Armies of The Lord of the Rings™ and the Armies of The Hobbit™ for the model profiles, according to your choice of Battle Companies warband.

NOTE: Both the template for map-based campaigns and Battle Companies roster are available as free downloads on the product page of the Games Workshop webstore. 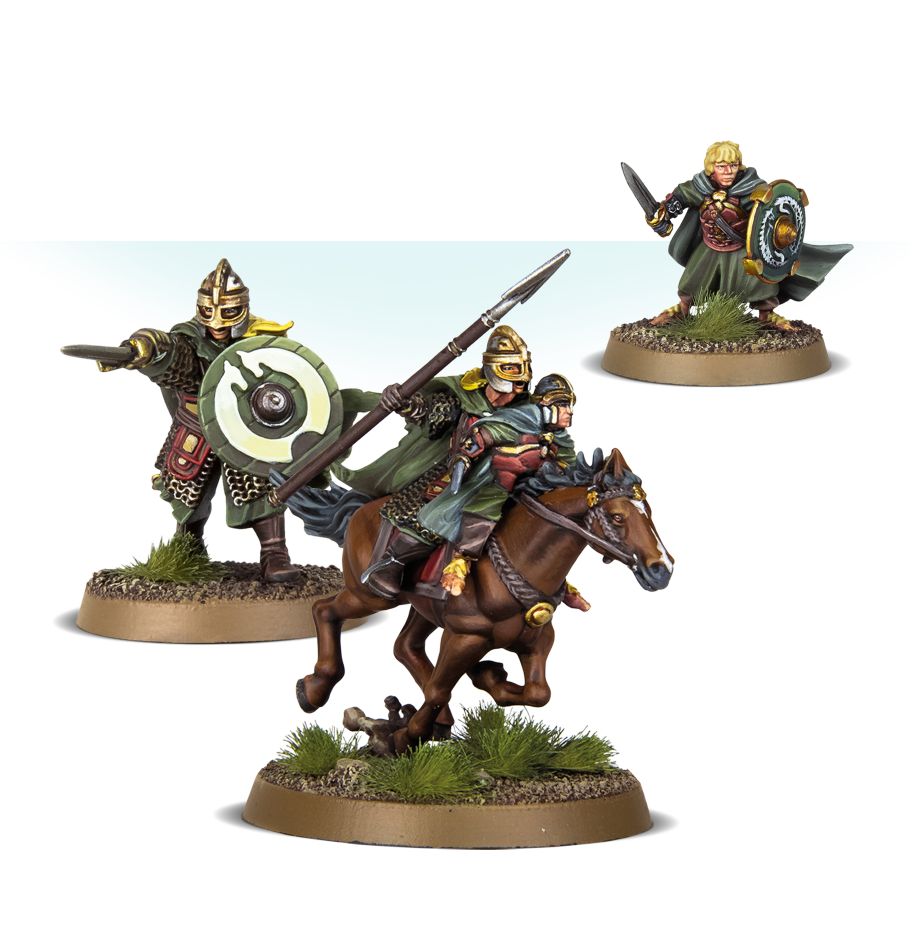 Éowyn is a valiant shield maiden of Rohan and niece to King Théoden. Unwilling to be left behind while the menfolk rode to war, she disguised herself as a Rider of Rohan, calling herself Dernhelm. Along with her plucky Hobbit friend, Meriadoc Brandybuck, she travelled with Théoden’s army in secret and fought with incredible valour at the Battle of Pelennor Fields.

This multipart plastic kit contains the components necessary to assemble Éowyn and Merry, both on foot and mounted on horseback. When mounted, you have the option to remove Merry, leaving just Éowyn. On foot, Éowyn carries a sword and shield, but also bears a throwing spear when mounted. Merry is clothed in the uniform of a Squire of Rohan and also bears a sword and shield. Both versions of Éowyn can be assembled with either a head that features her flowing golden hair, or with a full helm in her guise as Dernhelm.

These miniatures come as 23 components, and are supplied with 2 Citadel 25mm Round bases and a Citadel 40mm Round base.

There’s also a load of old and hard to find Middle-Earth models coming back for one week only as part of Games Workshop’s Made to Order range – make sure to order them this week if you want them! 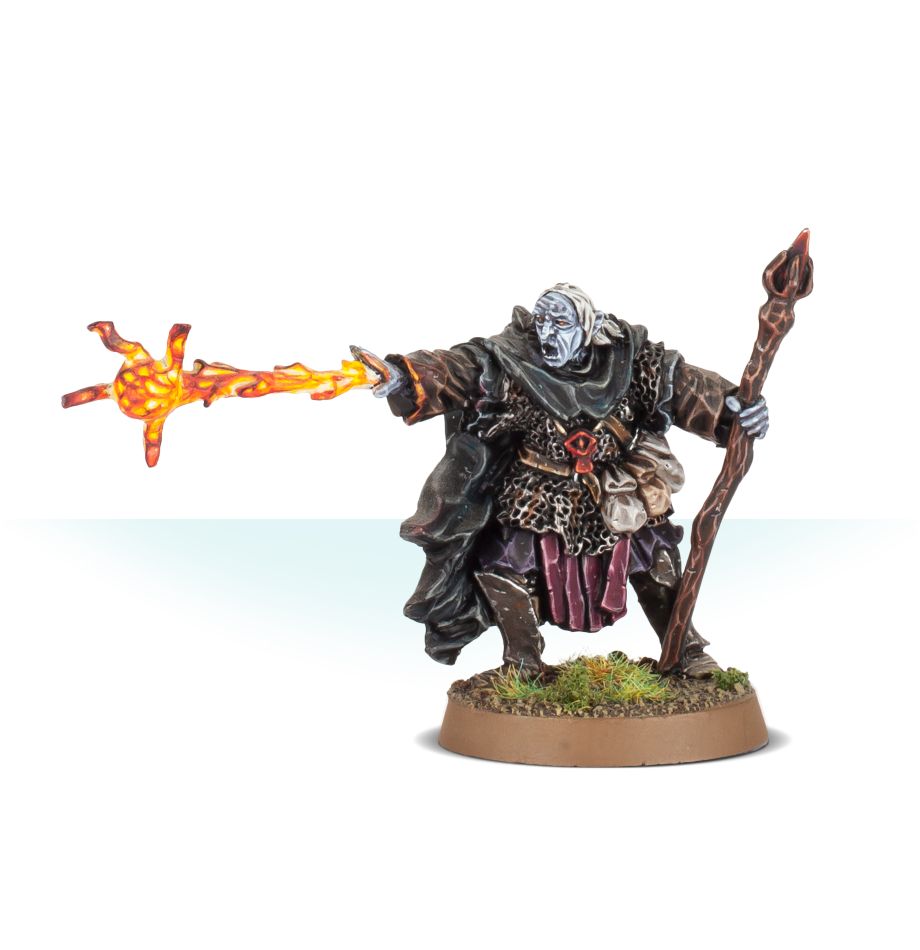 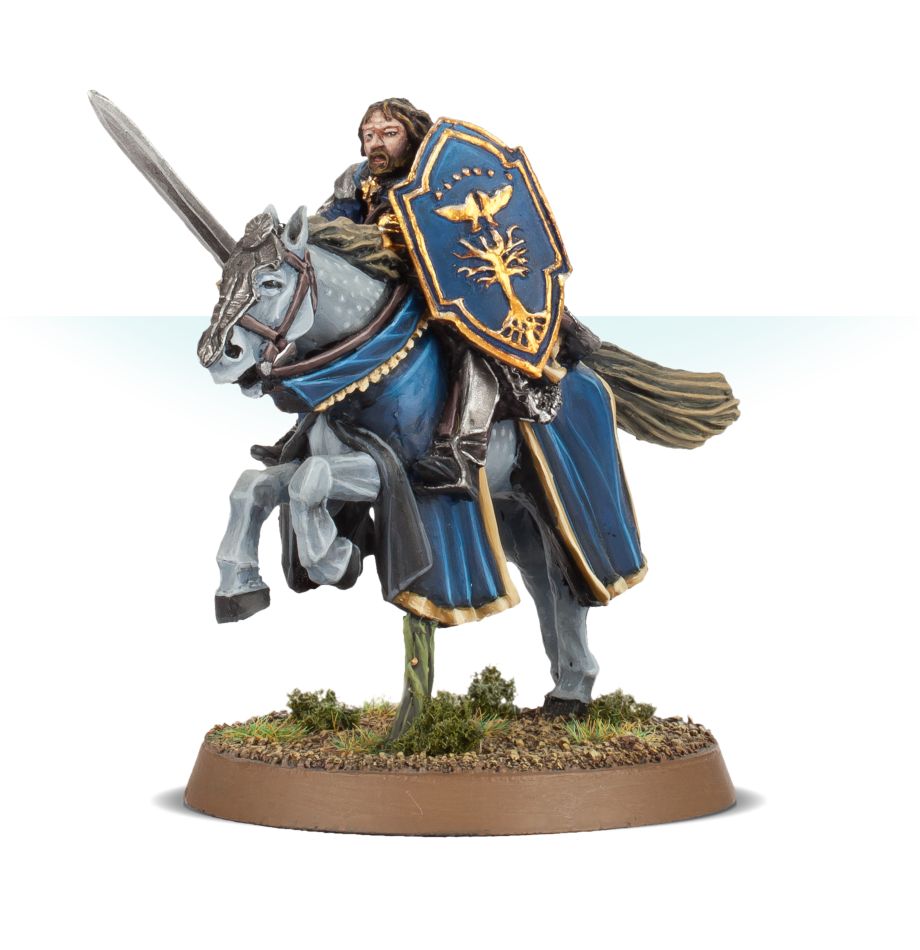 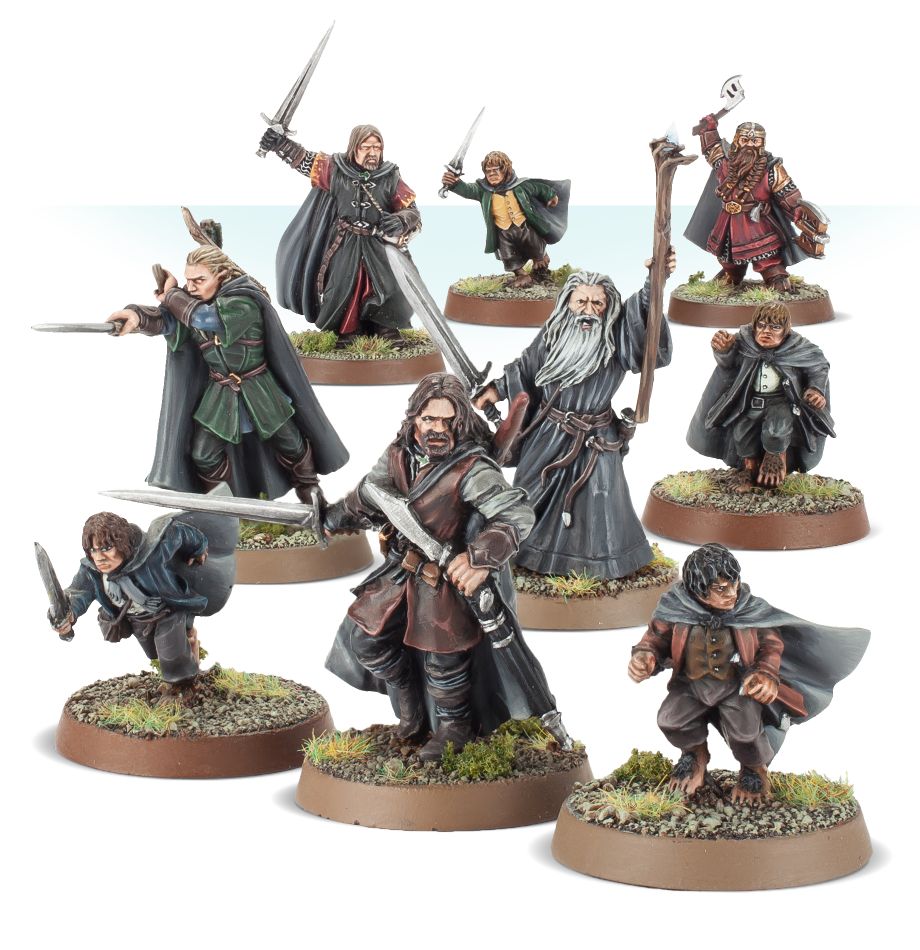