Warhammer Community have posted details of the new Nurgle’s Rotters team for Blood Bowl and they sound brilliant!!

“Look Bob – Nurgle’s Rotters are about ready to bring the putrid blessings of the Plague God to the gridiron.” – Jim

“They sure are, Jim – to the players and crowd alike! After all, everyone’s fair game when it come to Nurgle’s Rot!” – Bob

“That’s why I’m staying in the commentary box, Bob! I don’t fancy a horn growing out of my head any time soon… Anyway, before the game kicks off, let’s take a quick look at Nurgle’s Rotters in more detail…” – Jim 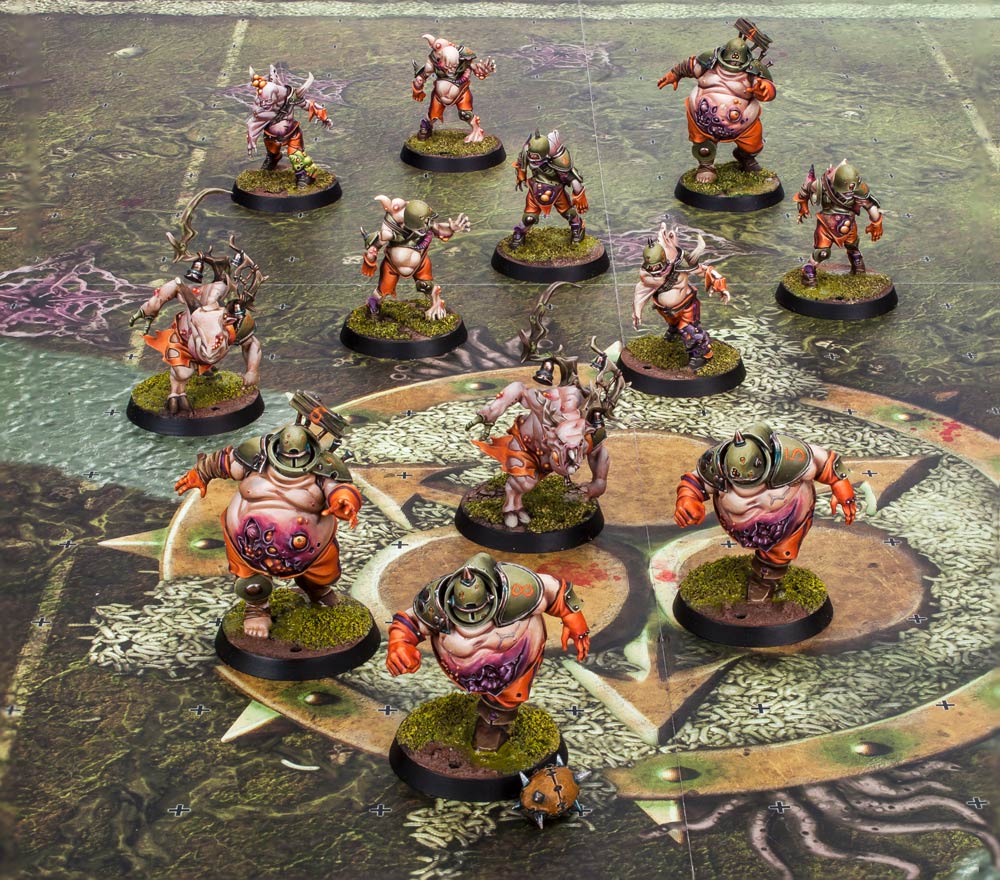 Ever since bursting onto the scene during the 2402 Dead Wood Cup, amid an unprecedented outbreak of plague, Nurgle’s Rotters have been the most favoured Nurgle team in the game. Why so? Because their owner is none other than Grandfather Nurgle himself! This divine patronage ultimately led them to lift the Blood Bowl VIII trophy in 2468 and earn the coveted Borak’s Choice Award that same year. But as with all things tied to the Great Game played by the Chaos Gods, their power waxes and wanes. As such, Nurgle’s Rotters have yet to replicate their incredible form seen in the 2468 season.

Looking at the roster available to the team’s coaching staff, there are no specific positionals, though there are four different player types to choose from. Let’s go through them and discuss each one in their putrescent glory:

These are cheap, dispensable players that can be sent to hold up even the most ironclad cage formation. Their armour is solid enough to take a few hits without falling apart, though if they do get injured, fall apart is exactly what they’ll do – injured players with Decay suffer the effects of two rolls on the Casualty table! Yes, this means they can die twice, though they can only ever miss a single game through injury. However, never forget that Rotters are entirely expendable and easily replaced, so coaches should treat them as such. Not only are they cheap, but the majority of opposing players that die in games against Nurgle’s Rotters will grant the team a new Rotter player due to Nurgle’s Rot! 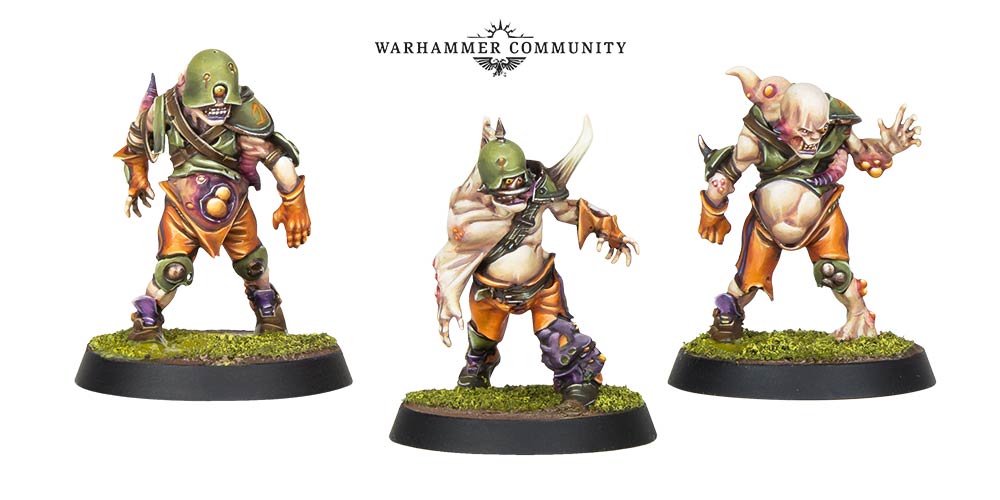 Pestigors are faster than their Rotter teammates as well as being more durable on account of their Regeneration skill. Their Horns also ensure that they’ll be blitzing at +1 Strength, though these advantages come at a price – double that of the Rotters, no less. As well as being the fastest players on the team, their Agility of 3 also make Pestigors amongst its most skillful players, so they will invariably do much of the ball-carrying. Protecting them is mandatory if they are to develop into the players their coaches need them to be. 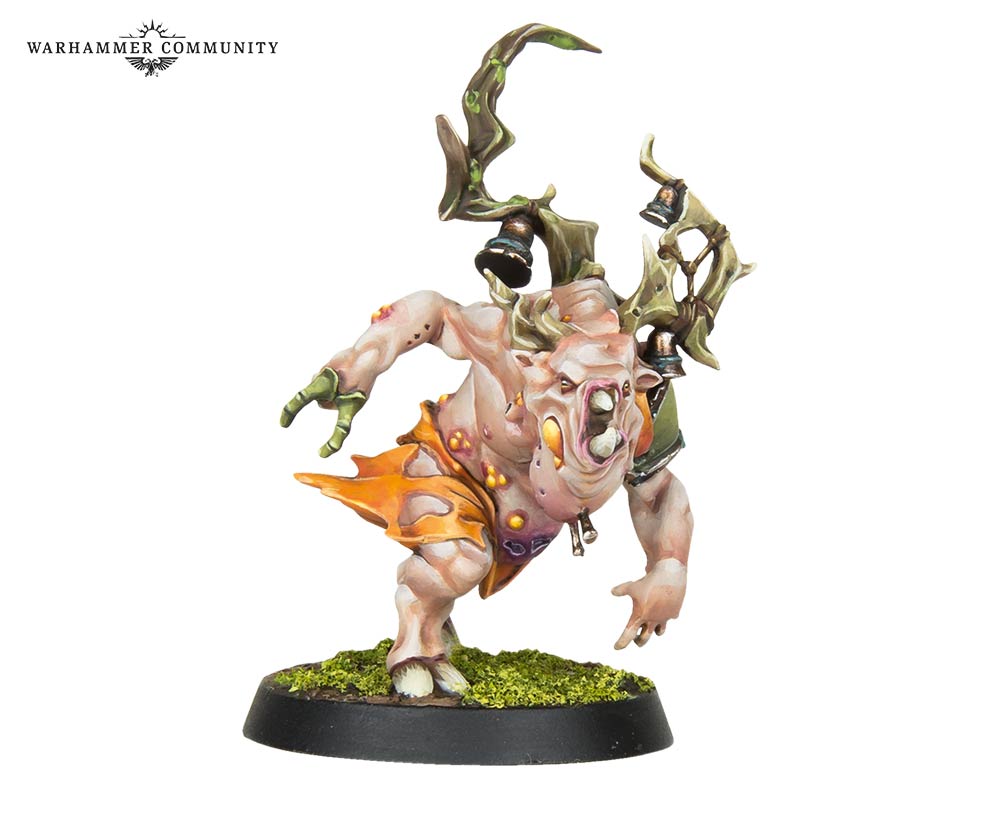 The offensive heart of the team (in smell as well as physical brawn), Bloaters are amongst the very best scrimmage-line brawlers in the game. Their Disturbing Presence and Foul Appearance skills ensure that they don’t even need to smash their opponents into the turf to disrupt them. With Armour Value 9 and Regeneration, Bloaters are also amongst the hardiest players in the game, though their lack of speed and agility make them somewhat unreliable ball carriers – that role is best left to the Pestigors. 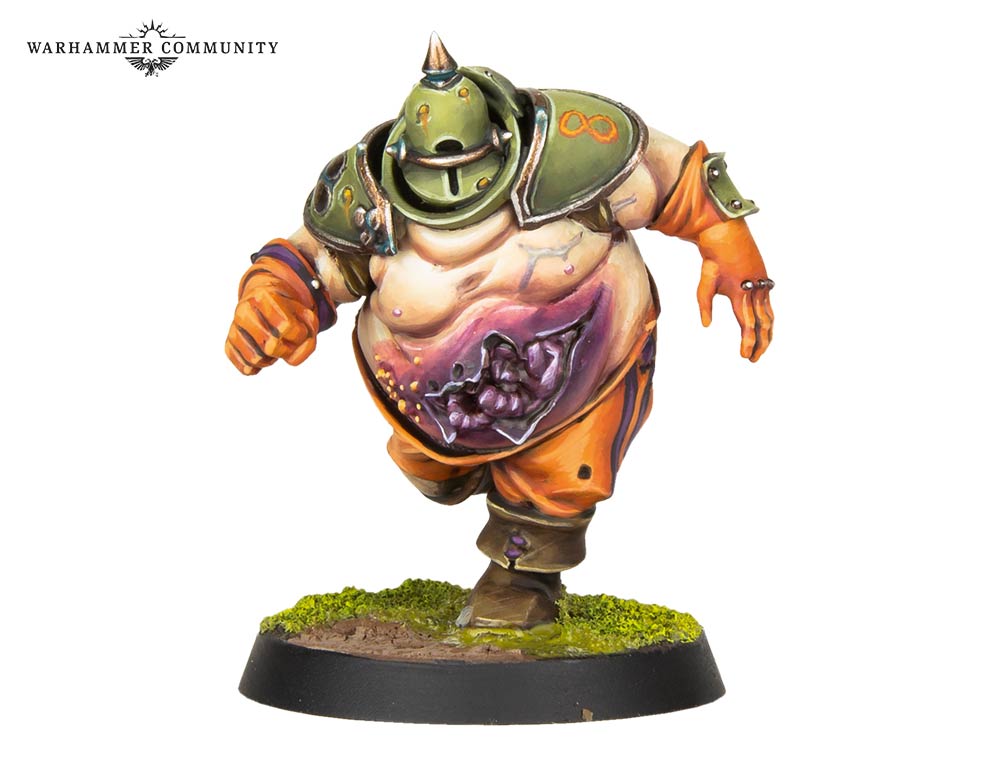 If the Bloaters can be said to dominate the line of scrimmage, the Rotspawn takes that principle to a whole new level. With Strength 5 and Tentacles on top of its Disturbing Presence and Foul Appearance skills, a Rotspawn can control a huge area of the pitch with its sheer presence alone.

With their combination of physical power and the debilitating effects they apply to opposing teams, Nurgle’s Rotters are incredibly effective at both holding up enemy cage formations and forming their own cages when on offence. With the Bloaters taking charge of the line of scrimmage, the Pestigors can take care of the ball (or sacking the ball-carrier on defence), while the Rotters can fulfil any role in between without the risk of losing more valuable players.

“Well I for one am looking forward to seeing how the Nurgle’s Rotters get stuck in this season.” – Bob