We have an awesome week of Pre Orders coming up next weekend from Games Workshop including the eagerly awaited New Seraphon Battletome! Here’s all the details from Warhammer Community!

We’ve got some exciting things coming for Warhammer Age of Sigmar, including an update to Battletome: Seraphon, a scenery kit and several Start Collecting! boxes. There’s also new Black Library fiction on the way, plus an exclusive model for Warhammer store opening celebrations! Take a look at This Week in Warhammer for a taste, and then keep scrolling for more info.

We’re All Made of the Stuff of Stars

Some just more literally than others…

Everyone’s favourite lizards are getting a new book, warscroll cards and scenery piece to bring the army into line with the recent crop of battletomes. 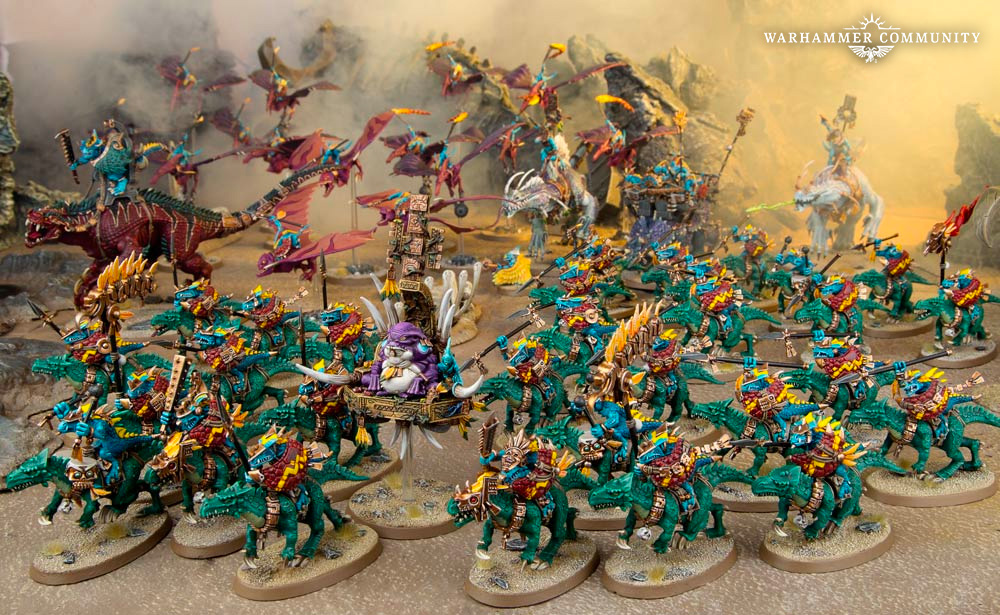 Battletome: Seraphon is an essential guide for fans of these star-faring lizards. This book finally settles the debate: are they funky space ghosts or even funkier reptilian people? The background explores the differences between various groups of Seraphon and gives hobbyists ideas for a range of colour schemes.

You’ll also find loads of new rules, opening up new tactical and army-building options. You’ve waited long for an update, and your patience will soon be rewarded – pre-order this 104-page book from this Saturday in standard hardback and digital editions. 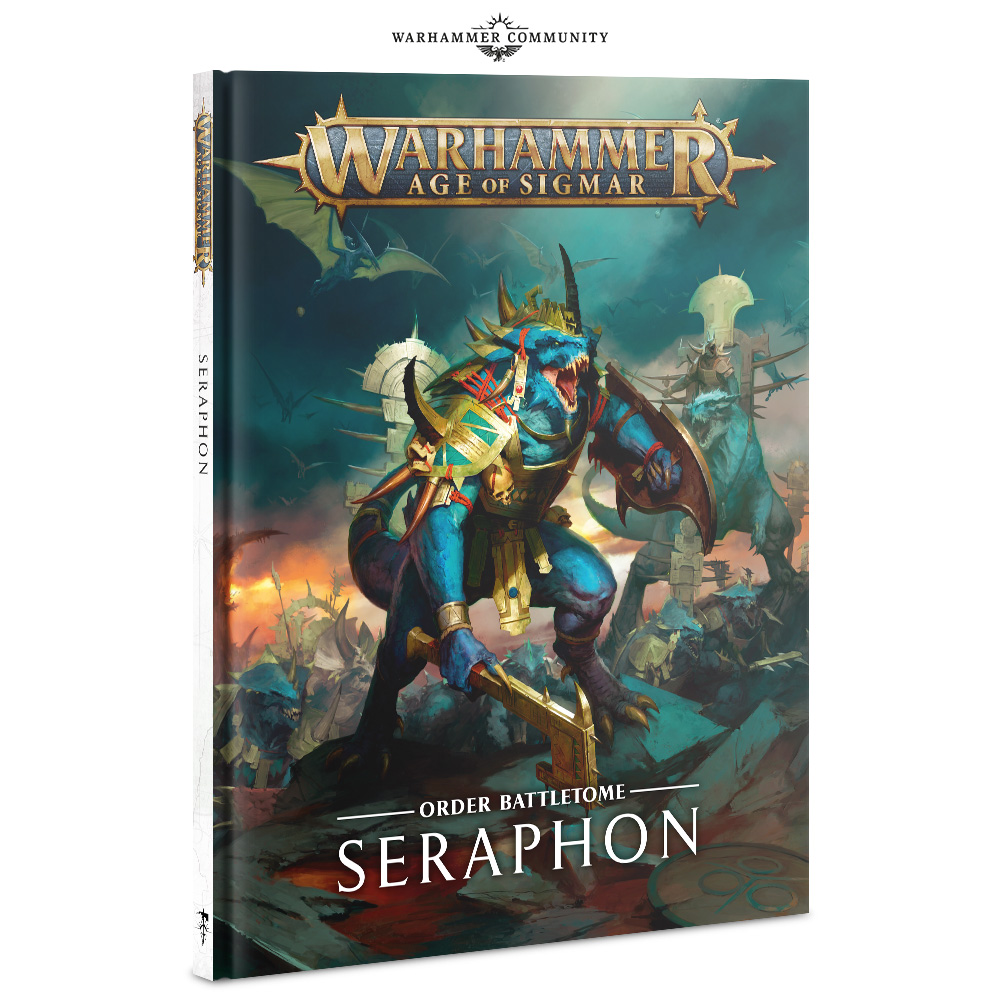 For devoted followers of the Great Plan, Battletome: Seraphon is also available in a beautiful limited edition with glossy art, gold details and page edges, as well as a ribbon bookmark. 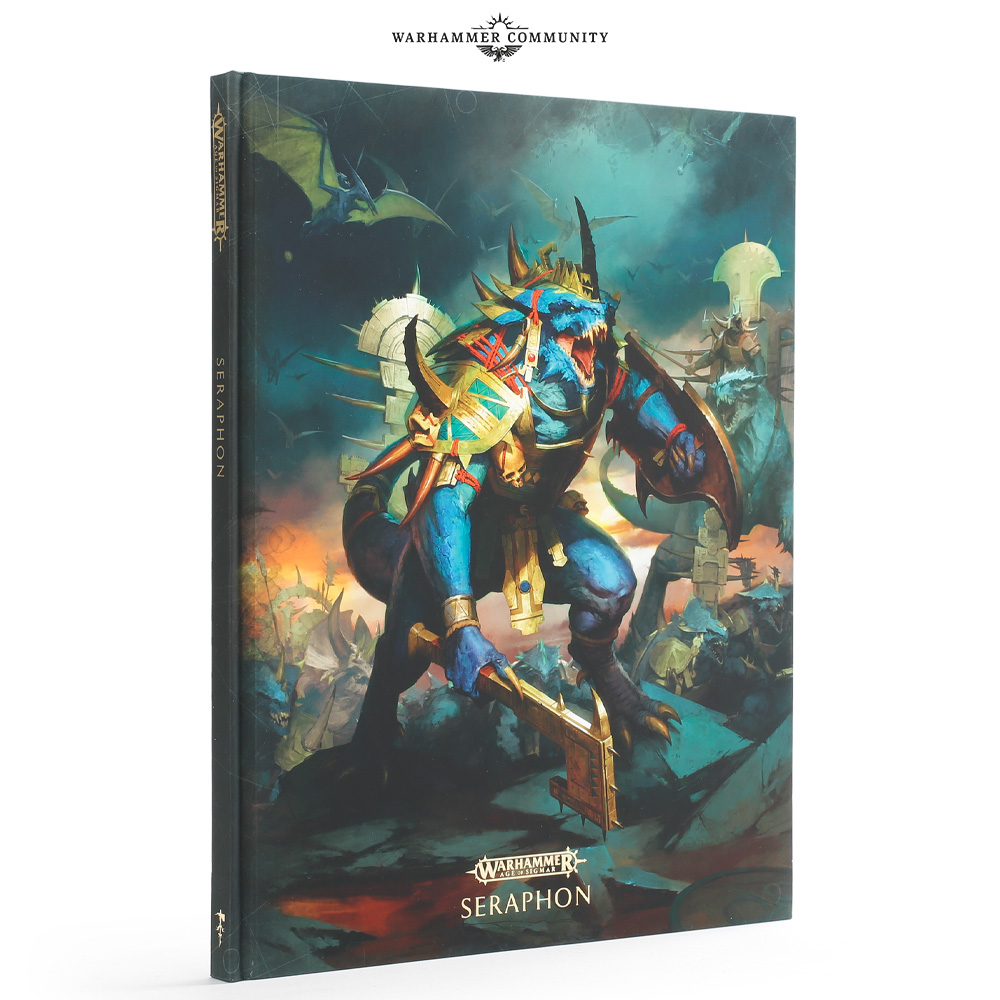 Of course, updating the Seraphon means they’re getting their own stunning scenery kit.

These ziggurats harness mystical energy to reshape reality itself into a form more pleasing to the Slann Starmasters. This is represented in-game by turning terrain features into deadly traps for the enemies of the Seraphon. Just look at it! 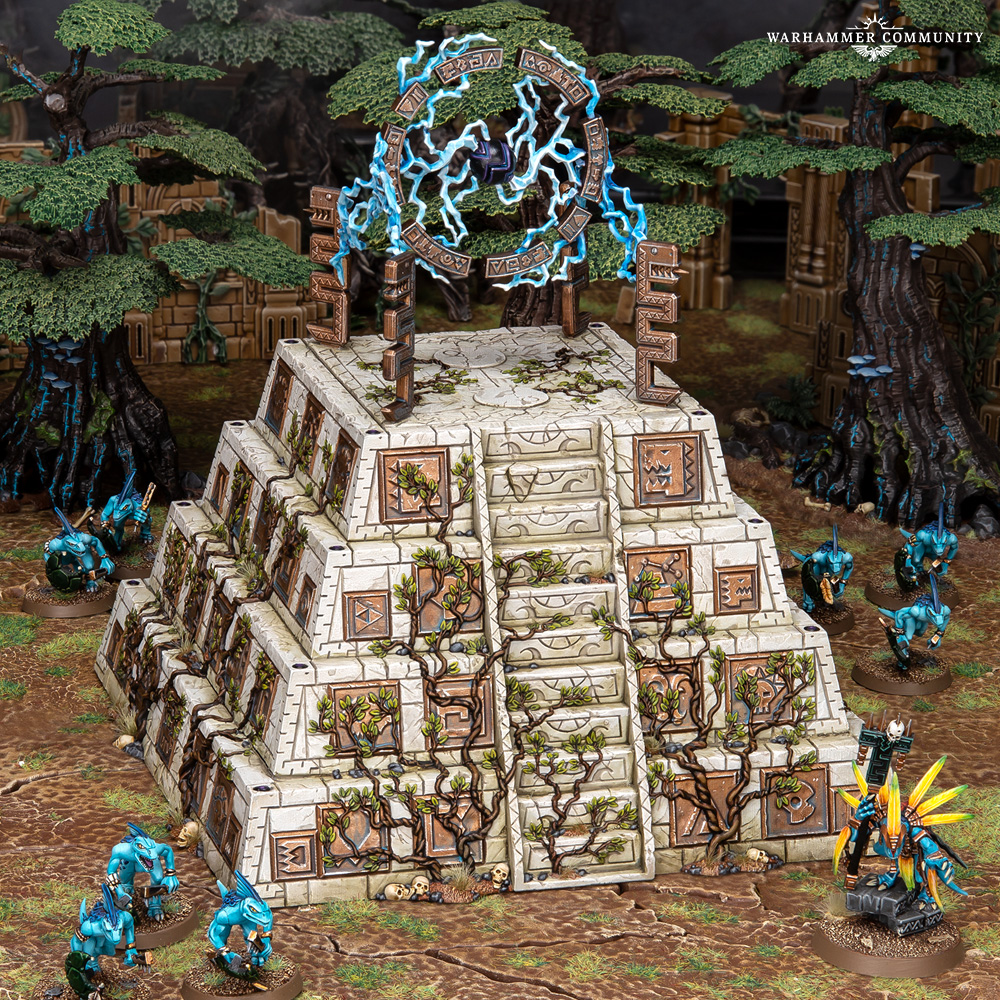 The top of the pyramid is dominated by a floating orb of power, surrounded by crackling arcs of energy holding aloft a ring of carved stone. Each side of this piece is reversible, so you can choose to build it as a fresh, clean ziggurat, or one that has begun the process of manifesting the jungle that will eventually surround and reclaim it.

You can garrison this pyramid with your Seraphon – a Wizard or Priest is able to activate the dread device to whip the surrounding terrain features into violent life. It’s a really thematic and entertaining ability that you’ll love unleashing on the tabletop.

Alongside the new battletome and scenery kit, you’ll want to grab a pack of Warscroll Cards and tokens to keep track of in-game effects and unit profiles. 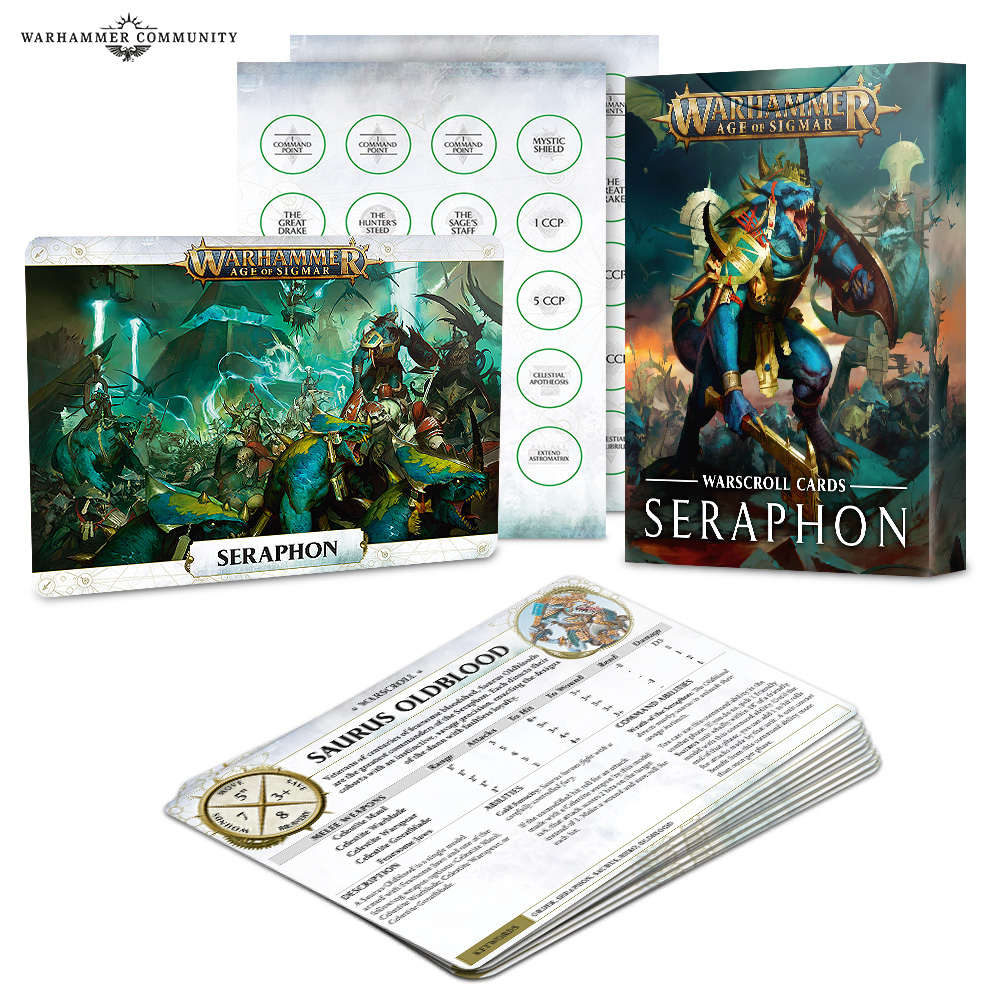 What Seraphon fan doesn’t love Skinks? Lucky for you, one of the three new Start Collecting! boxes includes loads of them! In Start Collecting! Skinks, you’ll get a Skink Starpriest, a cool dozen Skinks on foot, a few Terradon Riders (said riders are, of course, Skinks!), and a mighty Bastiladon with – you guessed it – a bunch of Skinks crawling around on it! It’s a veritable Skinkfest. 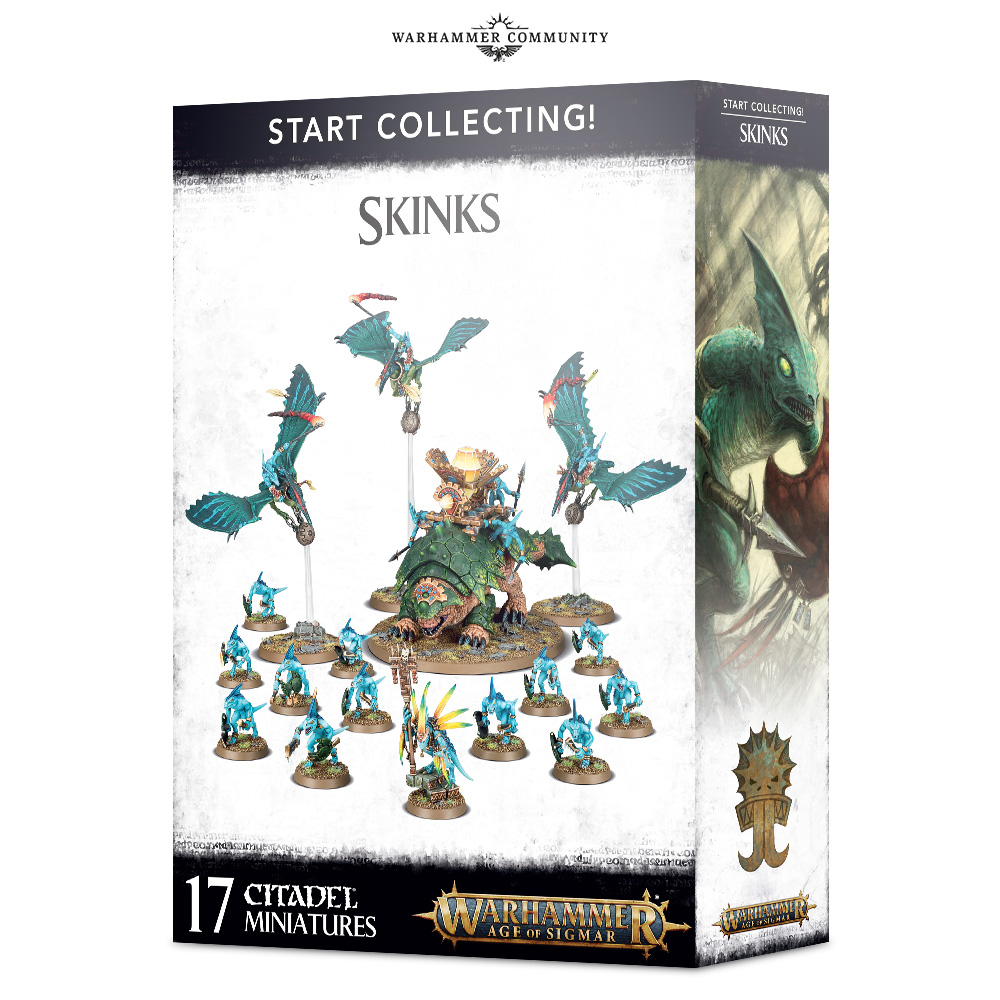 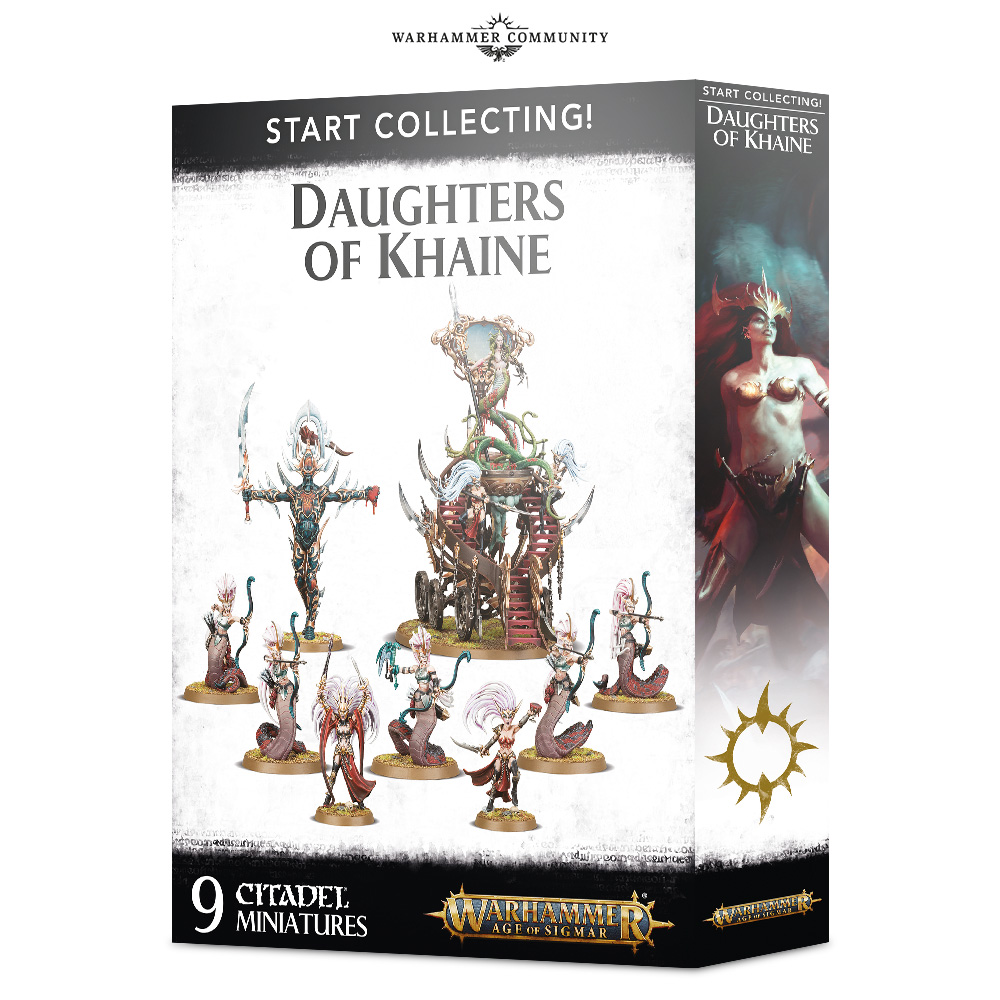 The Daughters of Khaine box includes five Melusai Blood Stalkers and a Bloodwrack Shrine – buckets of blood for everyone! You get the full kits of each, which will leave you with loads of bits and entire extra models depending how you build them. The big engine alone can also build a Cauldron of Blood, so it includes a Hag Queen, Slaughter Queen, Avatar of Khaine and the Bloodwrack Medusa, each of which can be mounted on their own stand if they’re not used for the main assembly. The Blood Stalkers can also be built as Blood Sisters if you prefer. This extremely versatile Start Collecting! box is essential for any devoted Daughter of Khaine.

The last hotly anticipated Start Collecting box is for the Gloomspite Gitz, which is mostly squigs, naturally. 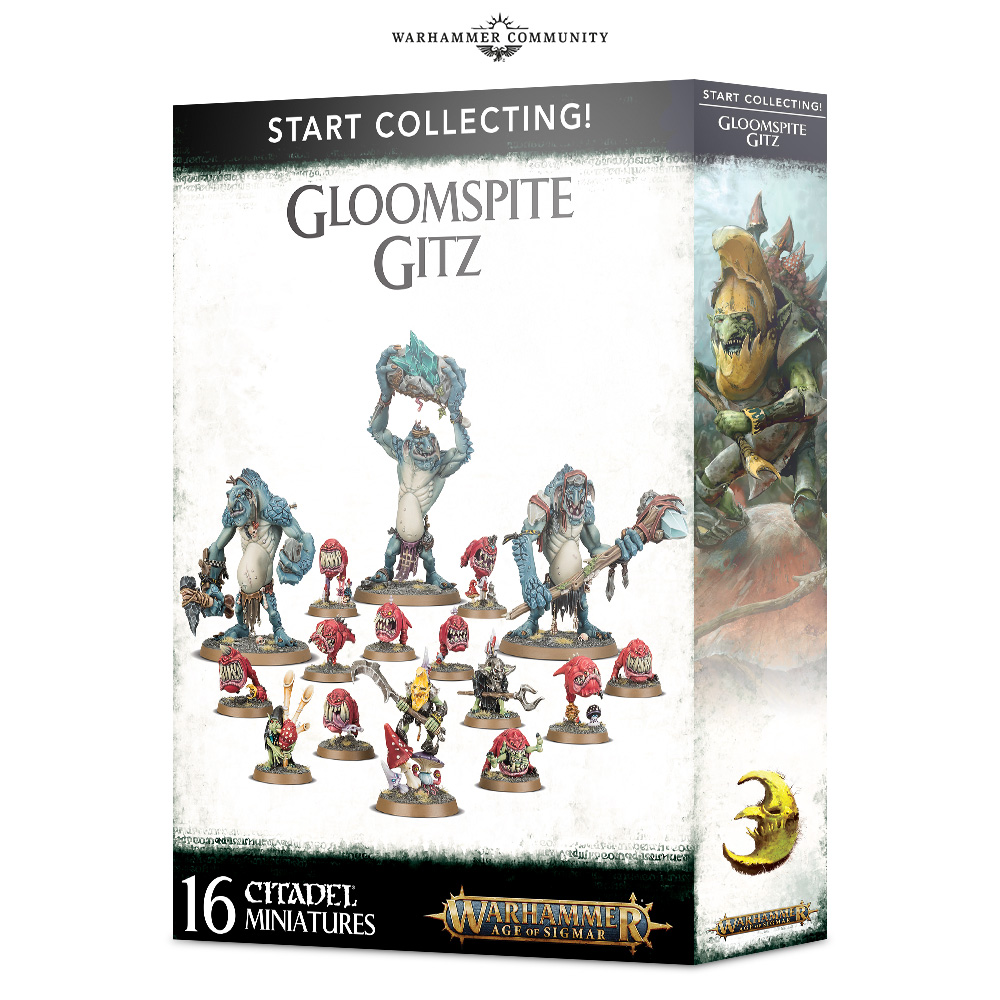 It starts with ten squigs and a pair of herders. As if that wasn’t awesome enough, the box also includes a Loonboss to lead them into battle. Oh, did we mention you also get three Rockgut Troggoths? These add some serious punch to your army, on top of being amazing models. The squigs and Troggoths come with loads of options and interchangeable bits, which makes the kit a fantastic addition if you’re already collecting Gloomspite Gitz, or a brilliant way to start if you’re not. These models are an absolute blast to assemble.

You know who else is a blast?

The new exclusive miniature for store opening events is this tough-as-nails Catachan Jungle Fighter veteran sergeant, and she’s ready to lead the charge. 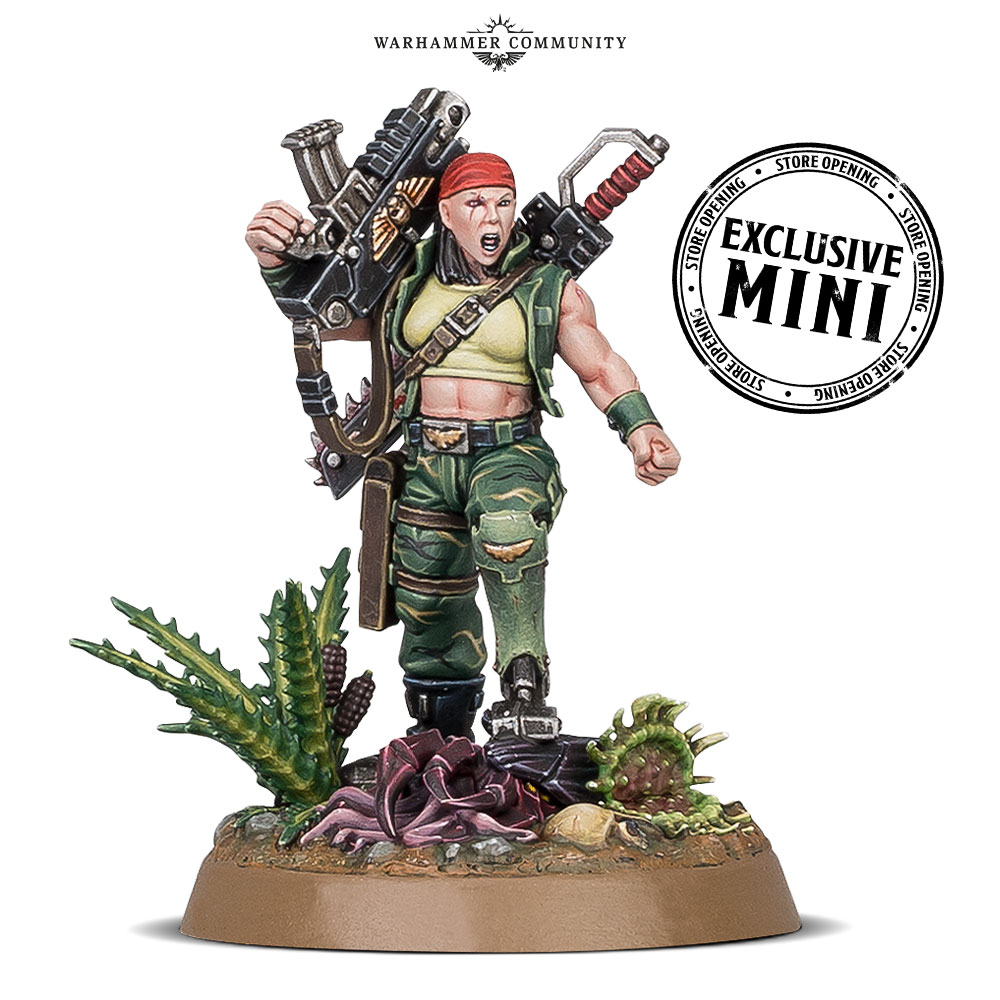 She’s packing a boltgun, chainsword, laspistol (you can never have enough guns), a bionic leg and an intimidating presence – as befitting a leader of the Astra Militarum. This model makes an ideal display piece, from the pose to the scenic jungle base which is decorated with carnivorous plants and a thoroughly deceased Tyranid organism. We’re sure Ripper is going to be a hit with both Astra Militarum players, collectors and painters alike.

We’ll have more information about how to get your hands on this awesome model soon. Look for new store opening events near you, and start planning your trip!

Settle in with a New Book

You’ll soon be able to pre-order new fiction, and established stories in new formats. First up, Guy Haley’s fantastic Belisarius Cawl: The Great Work. Now in paperback, this is your chance to take a good look at what goes on in one of the most complex minds in the Imperium. 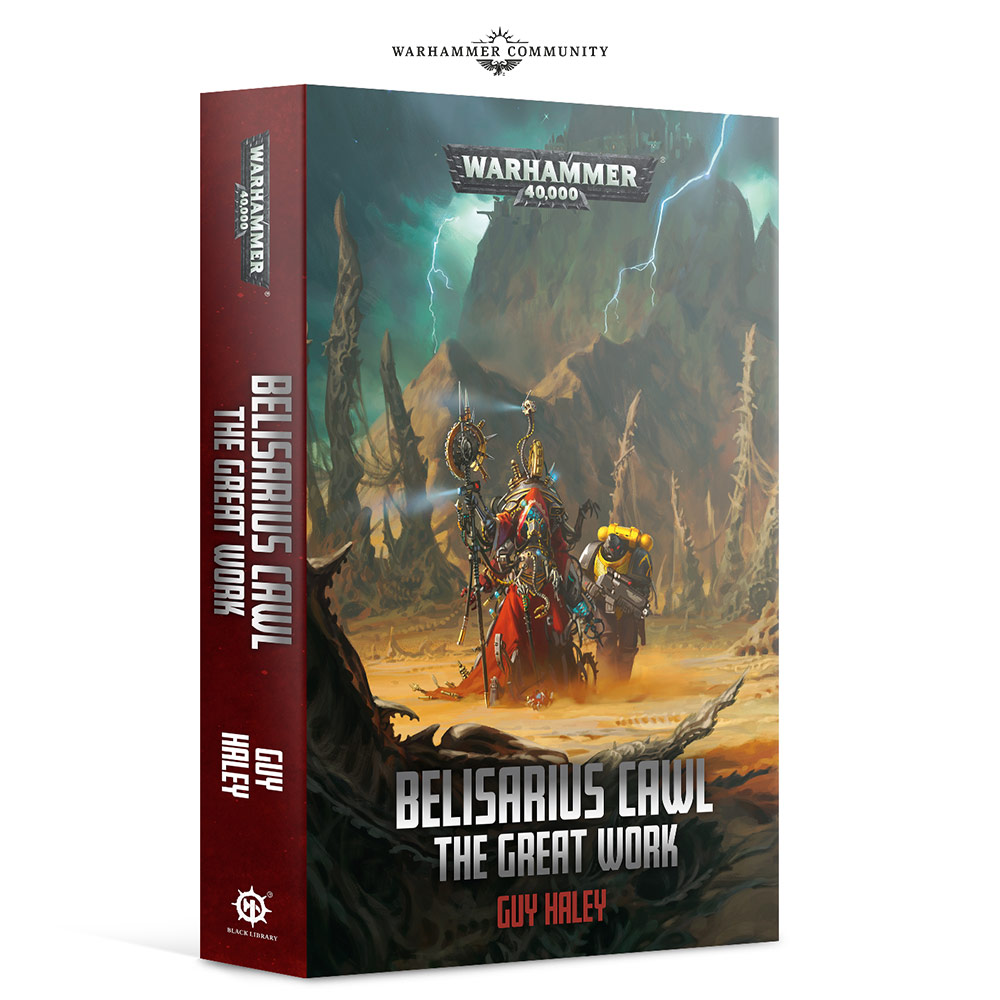 Fans of Gav Thorpe’s Last Chancers series (which is basically everyone) have been looking forward to the next entry in the series: Armageddon Saint, for some time. You don’t have much longer to wait – pre-order it in hardback, eBook and audio editions this Saturday! 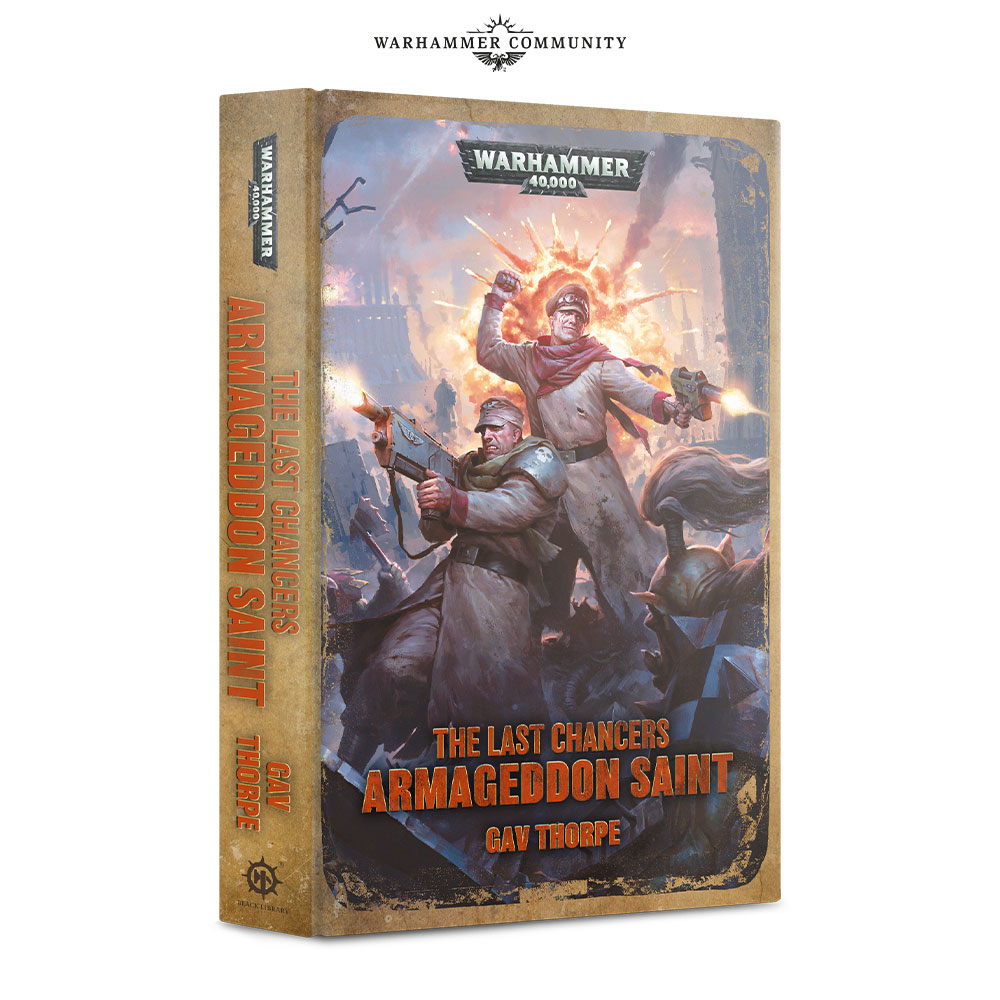 If you’ve been thinking about diving into Warhammer Horror, the Anathemas anthology is a fantastic way to start, with stories set in both the 41st Millennium and the Mortal Realms. You can pre-order it in paperback and eBook this Saturday. If that’s not enough horror for you, Nick Kyme’s Sepulturum will take you into the depths of a hive ravaged by a malicious contagion. Pre-order it in audio, hardback and digital formats. 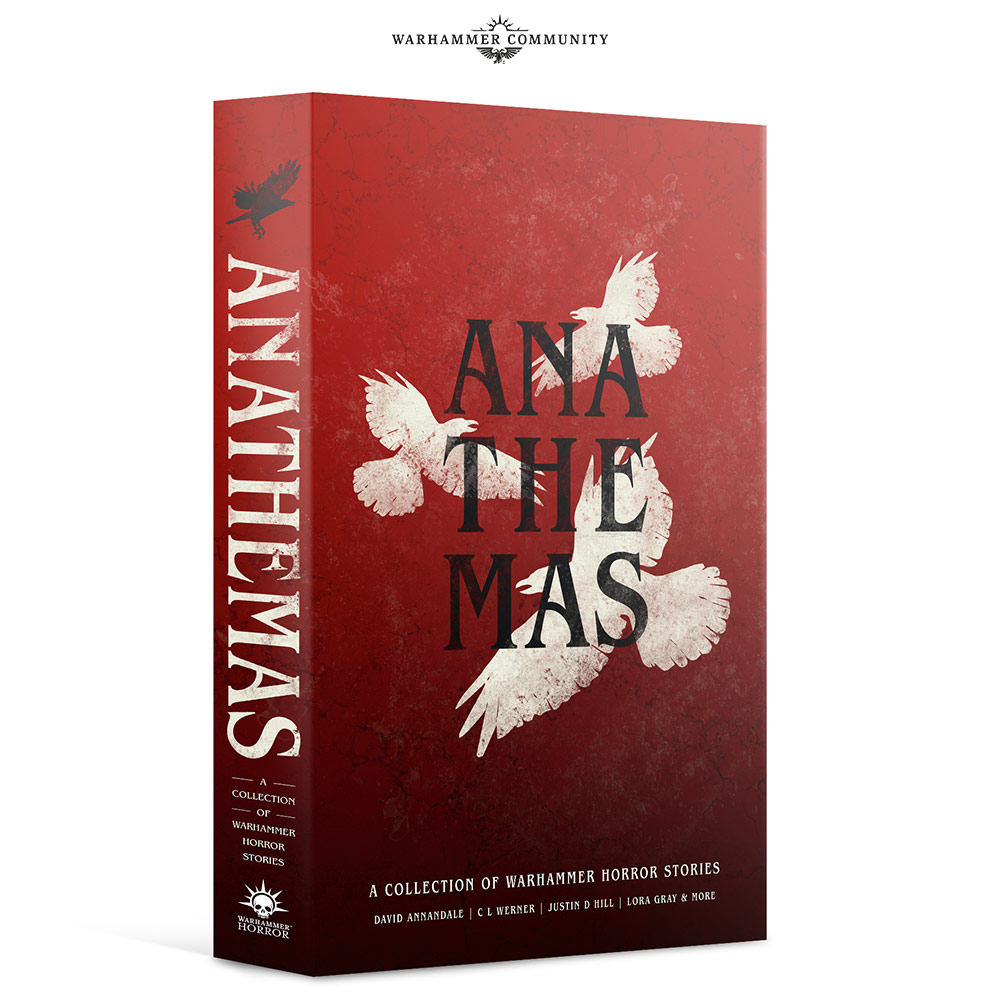 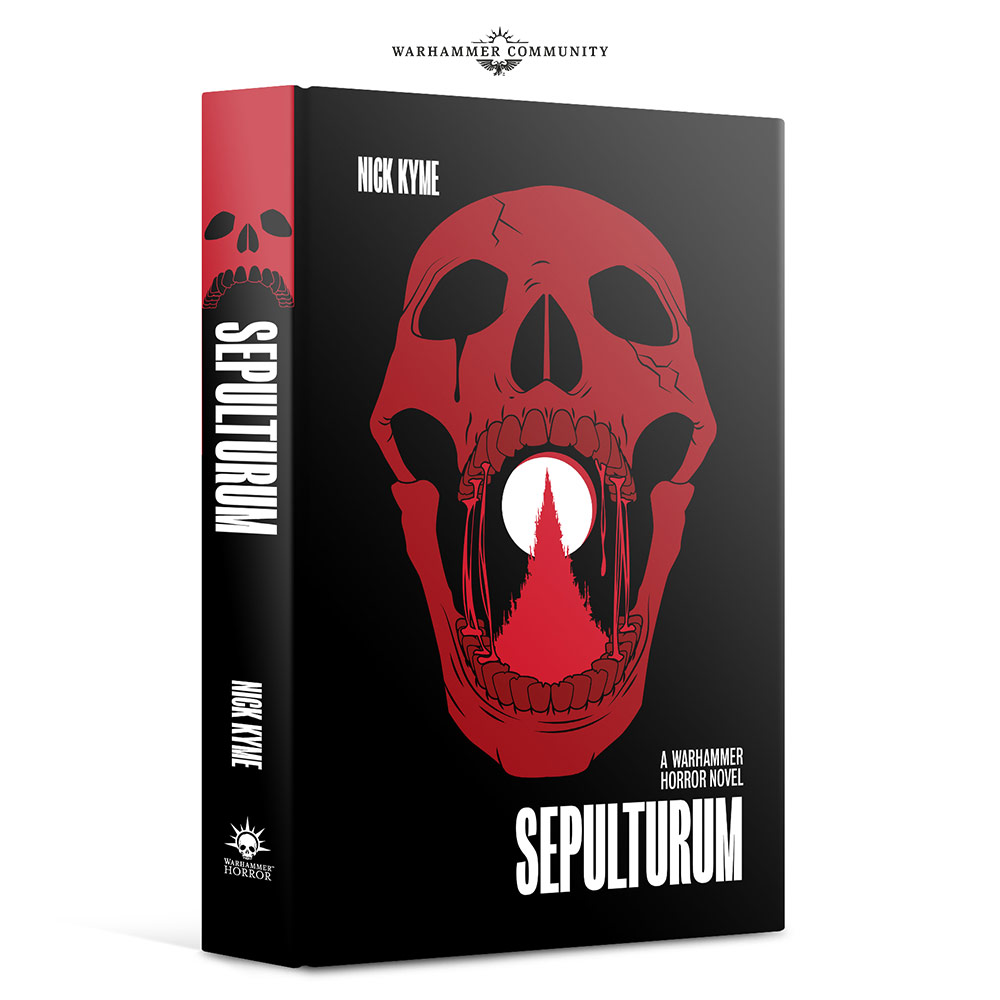 Last, but not least, Mike Brooks’ Rites of Passage – delving into the shadowy politics of the Navigator houses – makes its way to paperback soon! 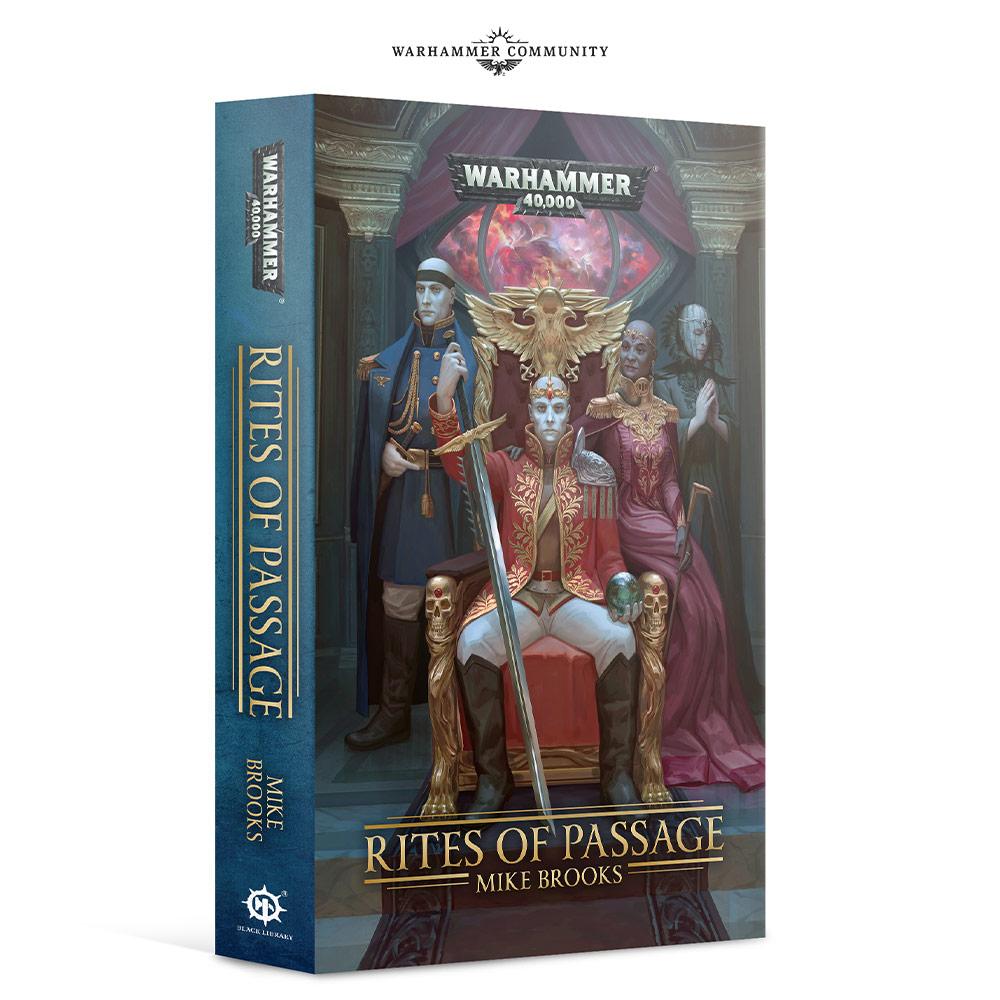 Check back every day this week for more information about all of these new releases, or sign up for our email newsletter to get the top articles delivered directly to you!