The aerial combat game Aeronautica Imperialis is up for pre order next Saturday! Alongside the main boxed game, Games Workshop also have a host of supplemental goodies going up alongside it!

n the 41st Millennium, there is only war. In space? War. On the land? WAR. Underground? SO MUCH WAR. The skies? You better believe there is a heck of a lot of war going on up there. Now, we’re giving you the chance to experience aerial warfare in the far future with Aeronautica Imperialis – a totally new game system designed to bring the thrills of combat in the sky to your tabletop.

A better way indeed! You’ll be able to pre-order Aeronautica Imperialis next weekend, with loads of kits, accessories and books to launch into. Neat, eh?

First up, if you’re interested in getting Aeronautica Imperialis, you’ll want to kick off your career as a pilot with the Wings of Vengeance boxed set. This starter set makes getting stuck in with Aeronautica Imperialis super easy, containing the full rules, an Area of Engagement battlemat, two squadrons of aircraft to game with, and more! 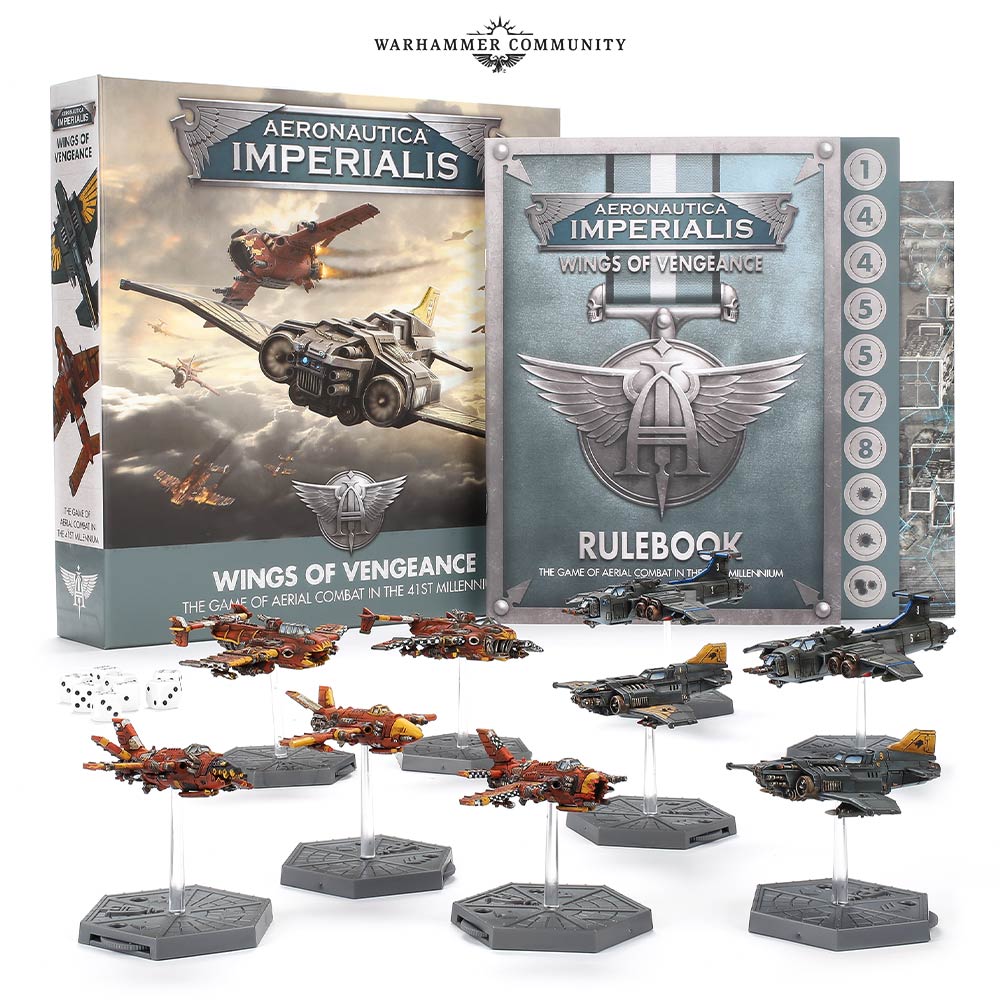 In the set, you’ll find:

We’ll be delving further into the Wings of Vengeance set with an unboxing tomorrow, so stay tuned.

Aeronautica Imperialis is more than a (very, very good) boxed game, it’s a fully-fledged new system with its own range of models. In addition to Wings of Vengeance, you’ll also be able to pick up all the kits in their own separate boxes. Let’s take a closer look at those…

Our miniatures team have worked tirelessly to transform some of the 41st Millennium’s most famous aircraft into all-new plastic models made especially for the game. Take the new Thunderbolt Fighter kit… 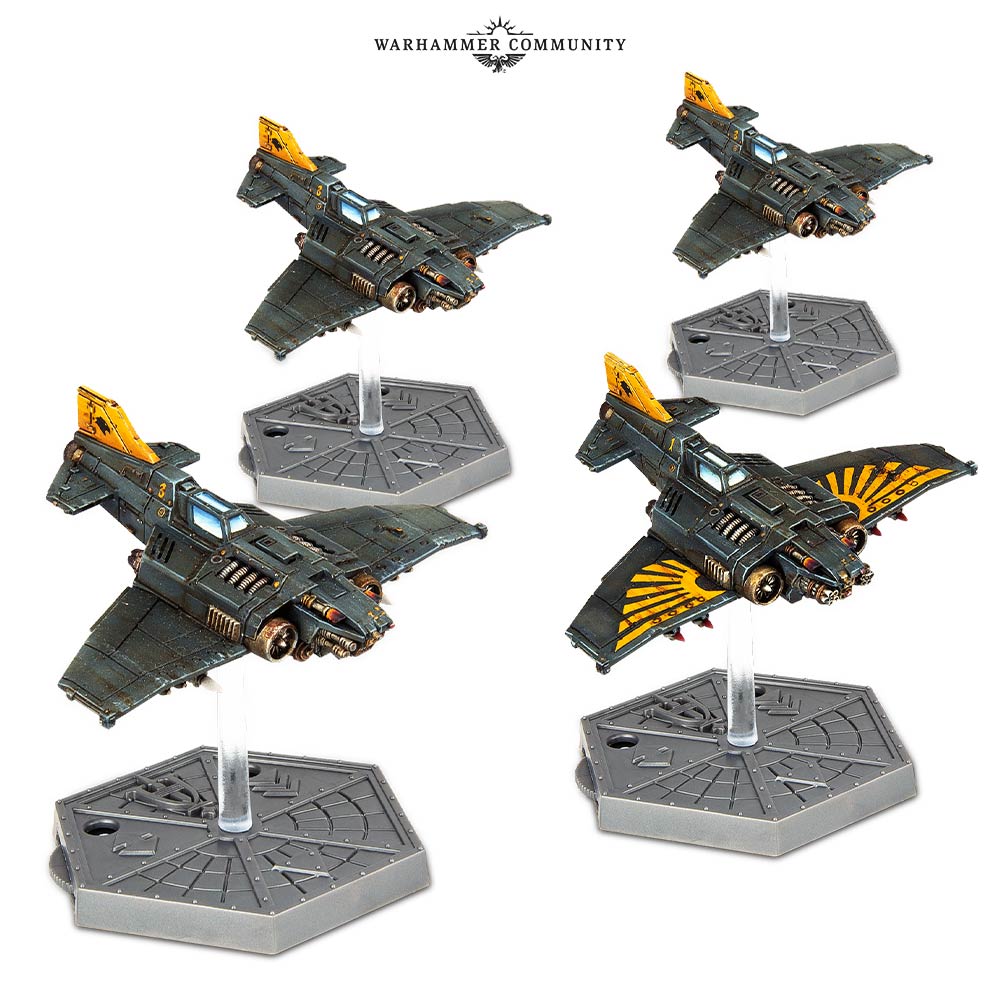 This multipart plastic kit allows you to build four Thunderbolt Fighters packed with incredible detail and options to customise your aircraft with all manner of weapons. This includes a variant of the Thunderbolt never-before-seen on the tabletop – the avenger bolt cannon-armed Thunderbolt Fury. Looking for something heavier? You’ll be able to reinforce your air wing with a box of two Marauder Destroyers (nigh-indomitable flying fortresses) and another box of Marauder Bombers (for when you need to turn your chosen ground target into a smoking crater). 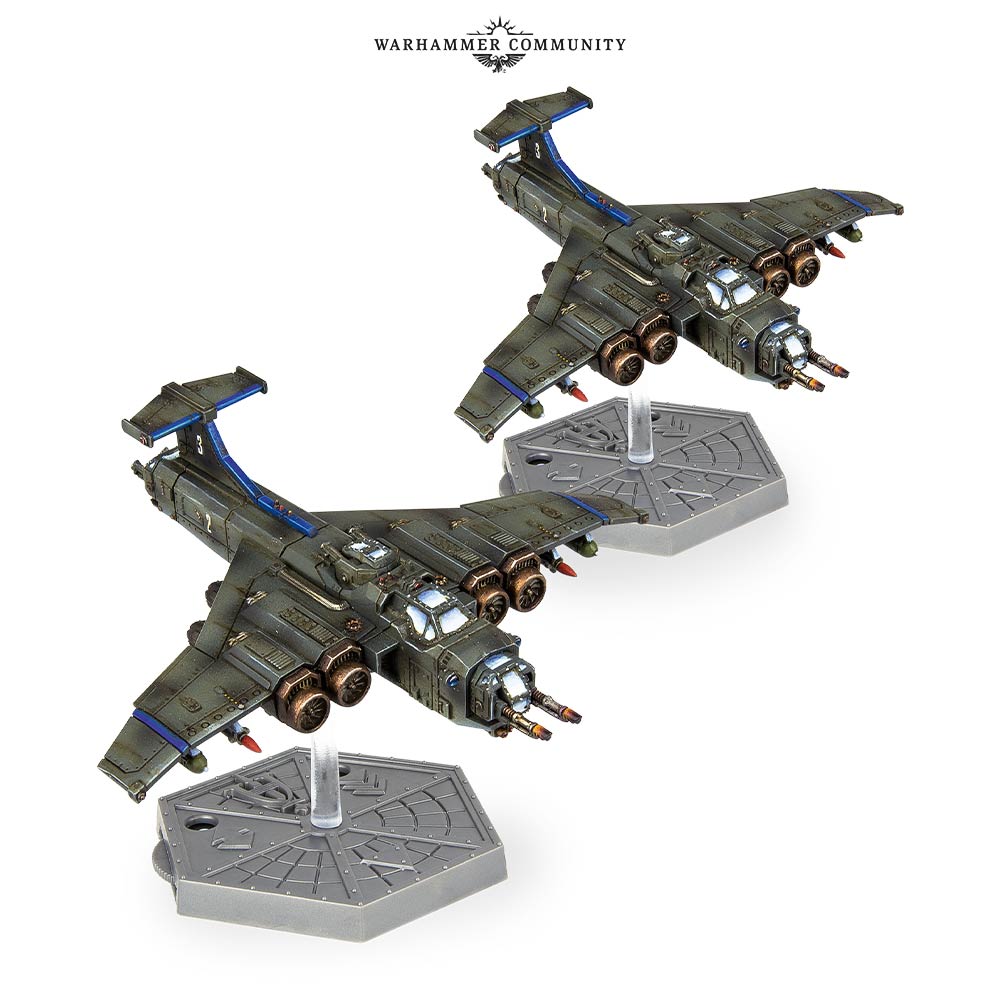 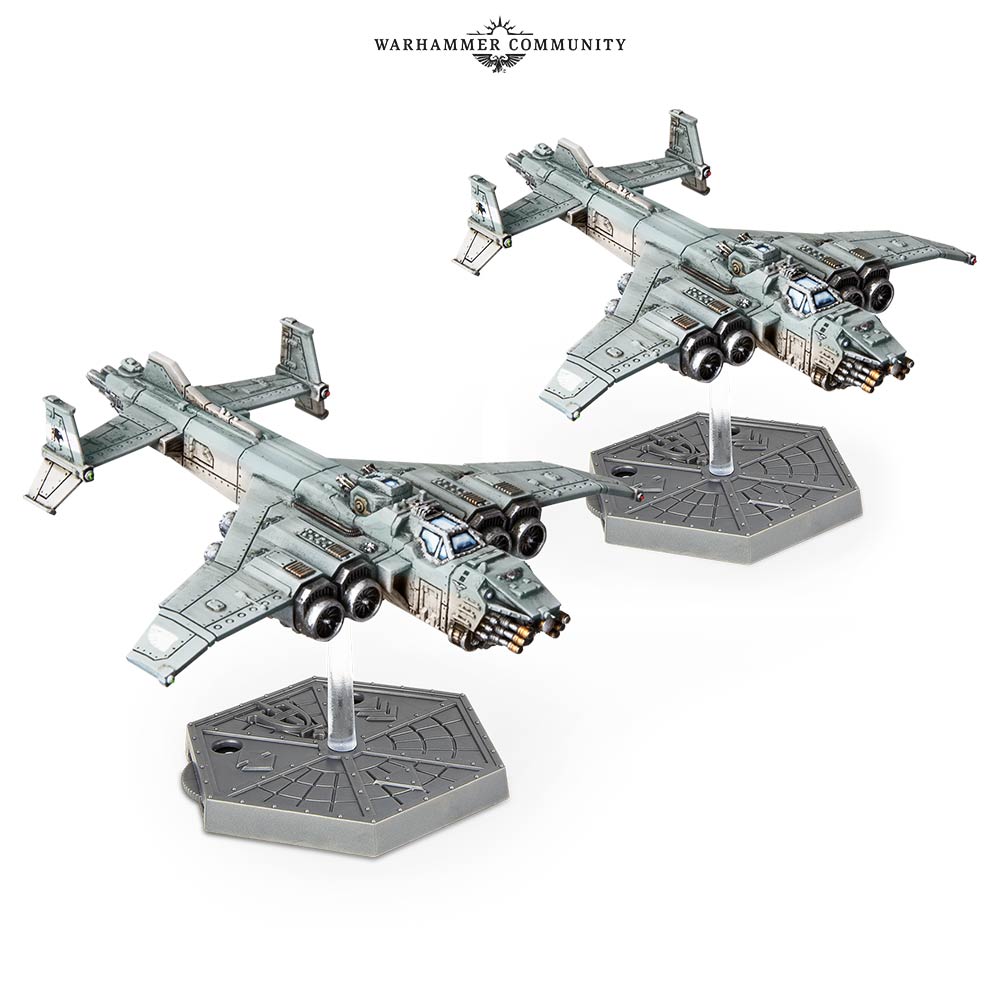 What if you’re looking for something with a bit more… dakka? Well, good news, Mekboys – the Air Waaagh! is getting some nifty plastic kits of its own. First up, teeny Dakkajets! This box lets you build six of these deadly, close-quarters aircraft, with interchangeable nose cones, wings, tails and cockpits, meaning even the largest aerial swarms will look distinct. 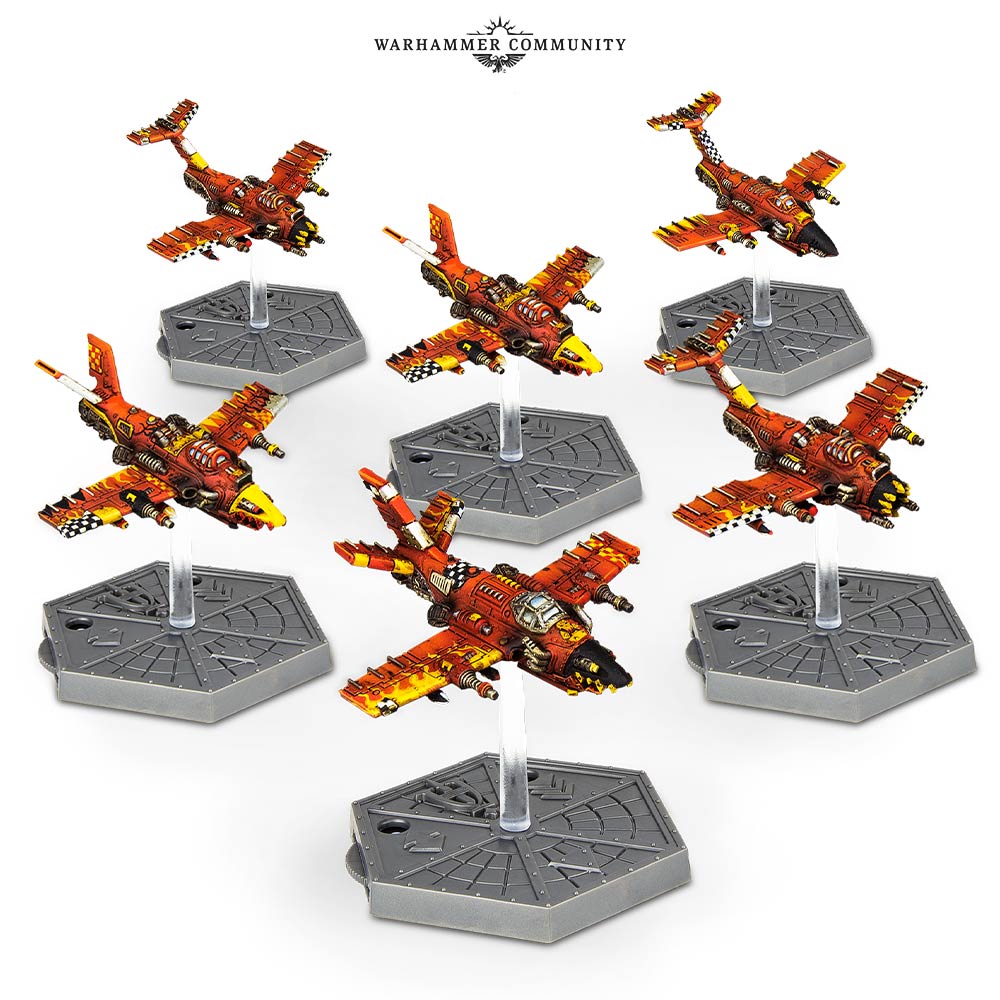 For those of you looking for something even shootier, grab some Fighta Bommerz. Available in a kit that builds four of these deadly craft, Fighta Bommerz give you a bit of everything – they’re capable of tackling ground and air targets alike with a truly terrifying array of guns, guns and more guns. 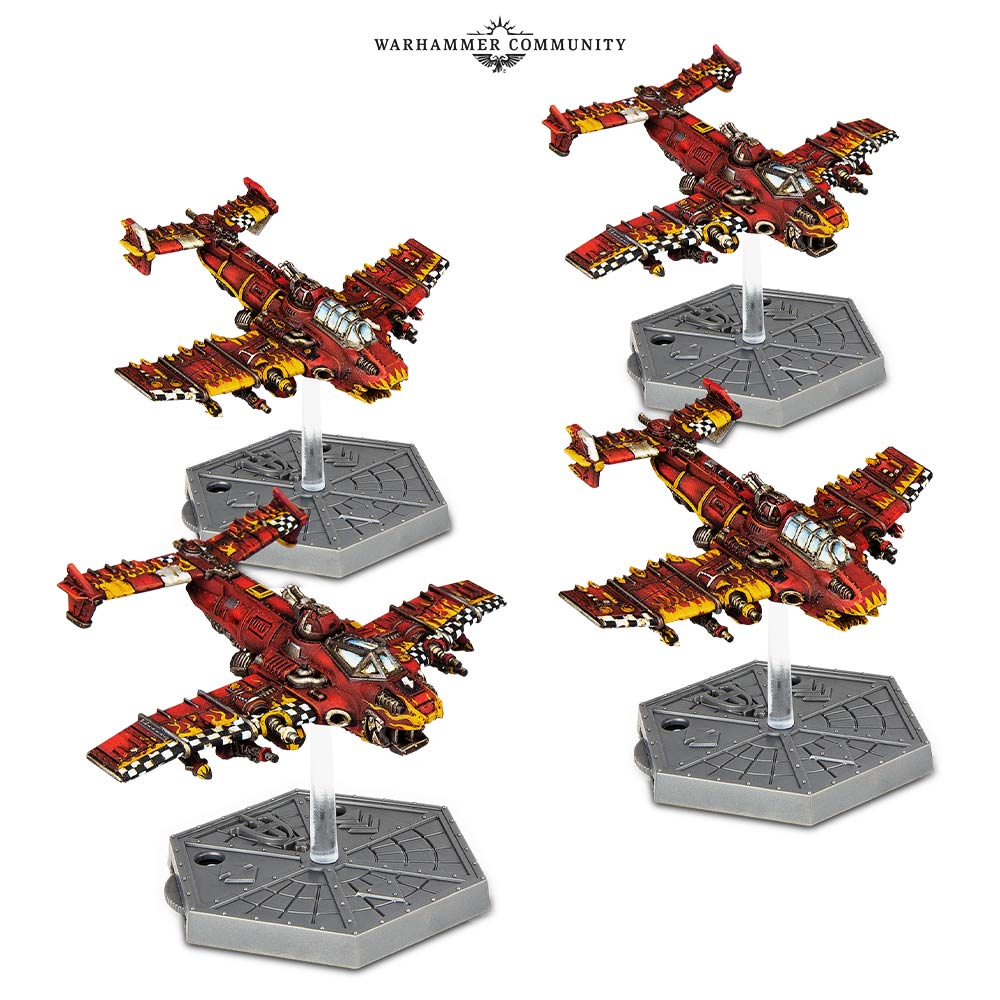 This is just the beginning for Aeronautica Imperialis, and much like Adeptus Titanicus and Necromunda, we’ll be expanding the game regularly with supplements packed with lore, new rules, and more! At launch, you’ll be able to explore the war-torn skies of Rynn’s World with a new campaign book. 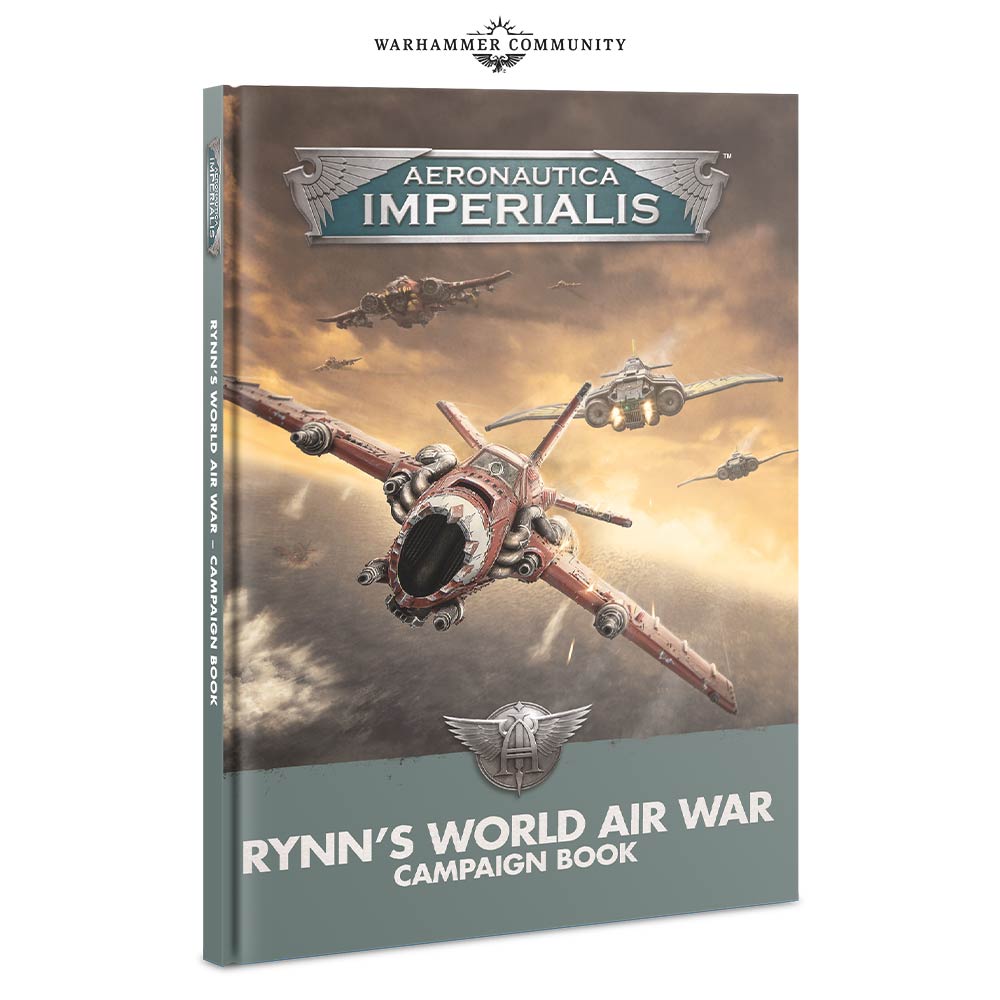 As well as offering new insights into aerial warfare in the 41st Millennium, the Rynn’s World campaign book is a great add-on to the Wings of Vengeance set, letting you link your games in thrilling campaigns, fight through six new scenarios and add ace pilots to your squadrons. The book also adds ground targets to the game, allowing you to bolster your forces with static defence turrets, bringing a new tactical layer to gaming and list building. 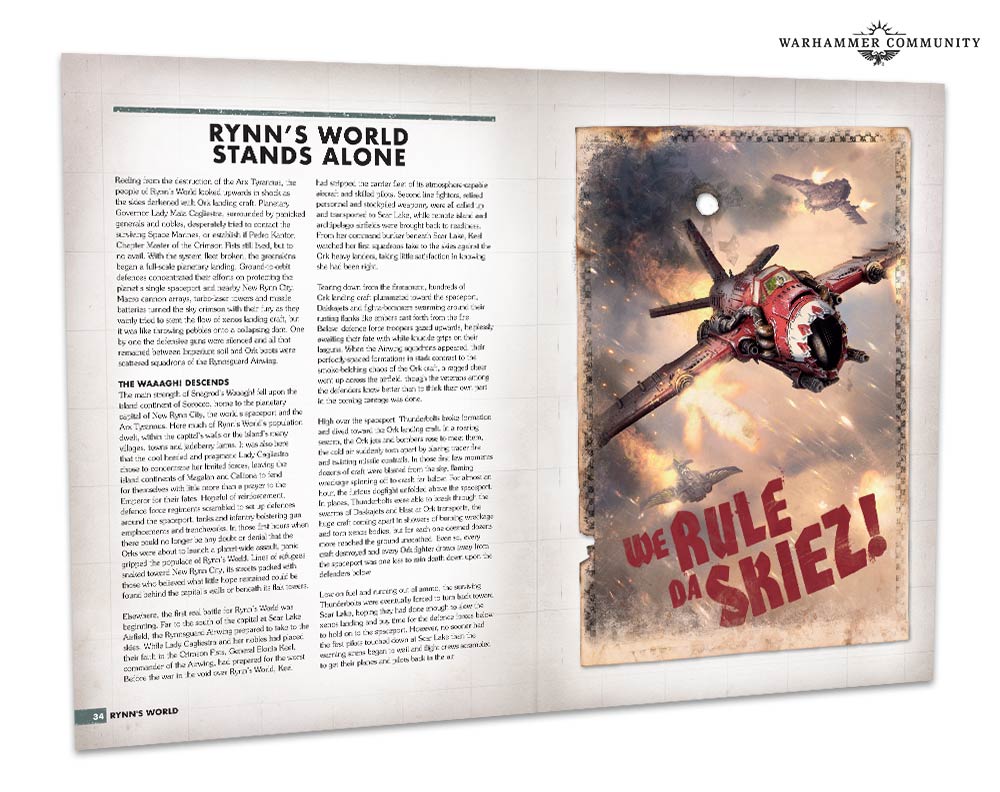 What’s more, the Rynn’s World book contains the full rules for Aeronautica Imperialis, so you’ll be able to play the game, even if you’re not getting the Wings of Vengeance set! It’s particularly useful if you’re splitting the box with a friend and need an extra set of rules.

Next weekend, you’ll be able to supplement Aeronautica Imperialis with loads of nifty accessories. An additional Area of Engagement mat, made of card and larger than the one found in the Wings of Vengeance set, makes a great backdrop for your larger aerial battles. 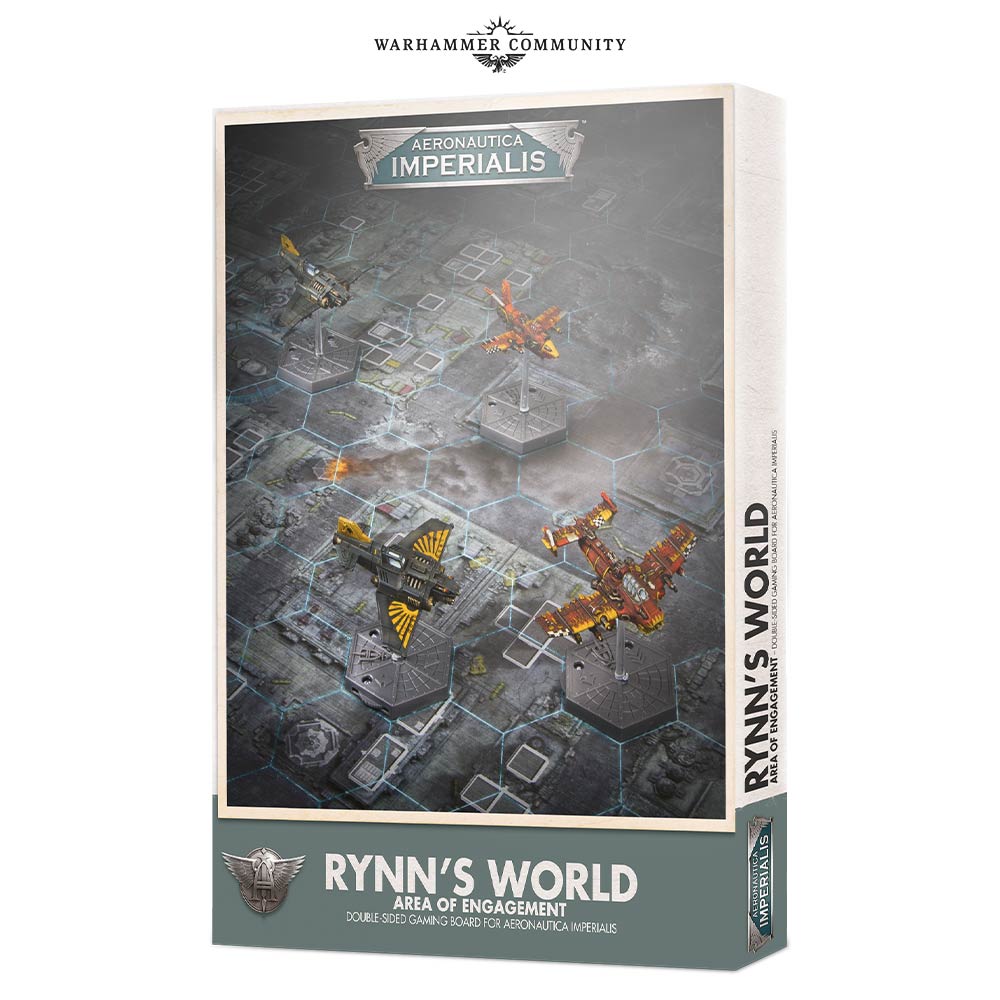 The Ground Assets set is also great for populating your battlefields with all manner of weapons batteries, bunkers and target markers that are perfect for representing ground-based targets. You could also combine a few sets to make sprawling battlefield boards… 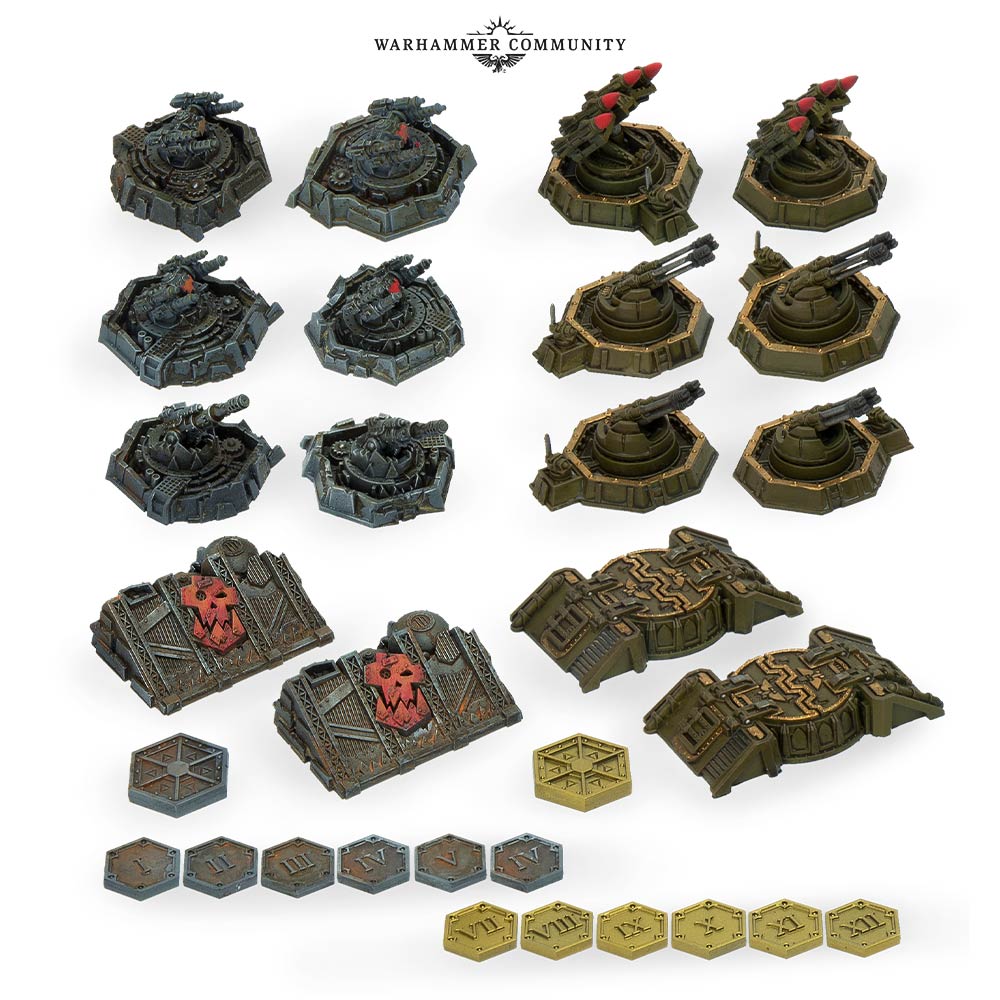 Handy card packs, meanwhile, are perfect for tracking your key weapons and aircraft in the heat of battle – weapon cards for hellstrike missiles and the like let you monitor single-shot options with ease. Just put them aside once you’ve fired them! 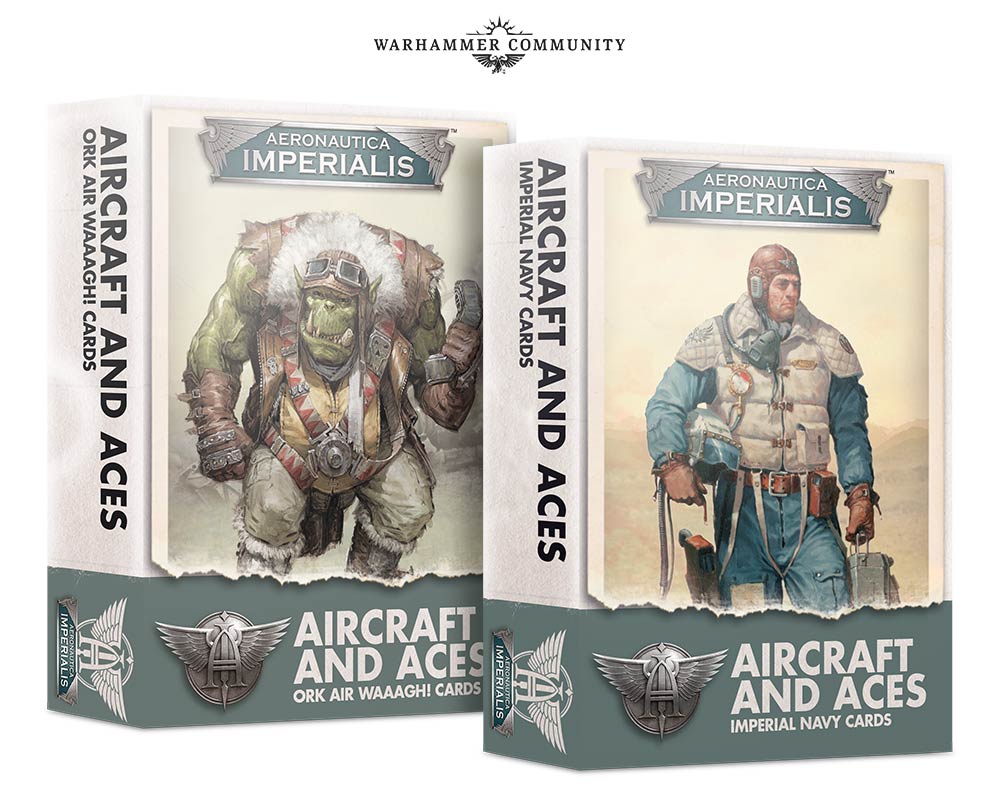 Additional Order Tokens ensure you’ll never run short mid-battle, and again, are perfect if you don’t plan on picking up Wings of Vengeance. 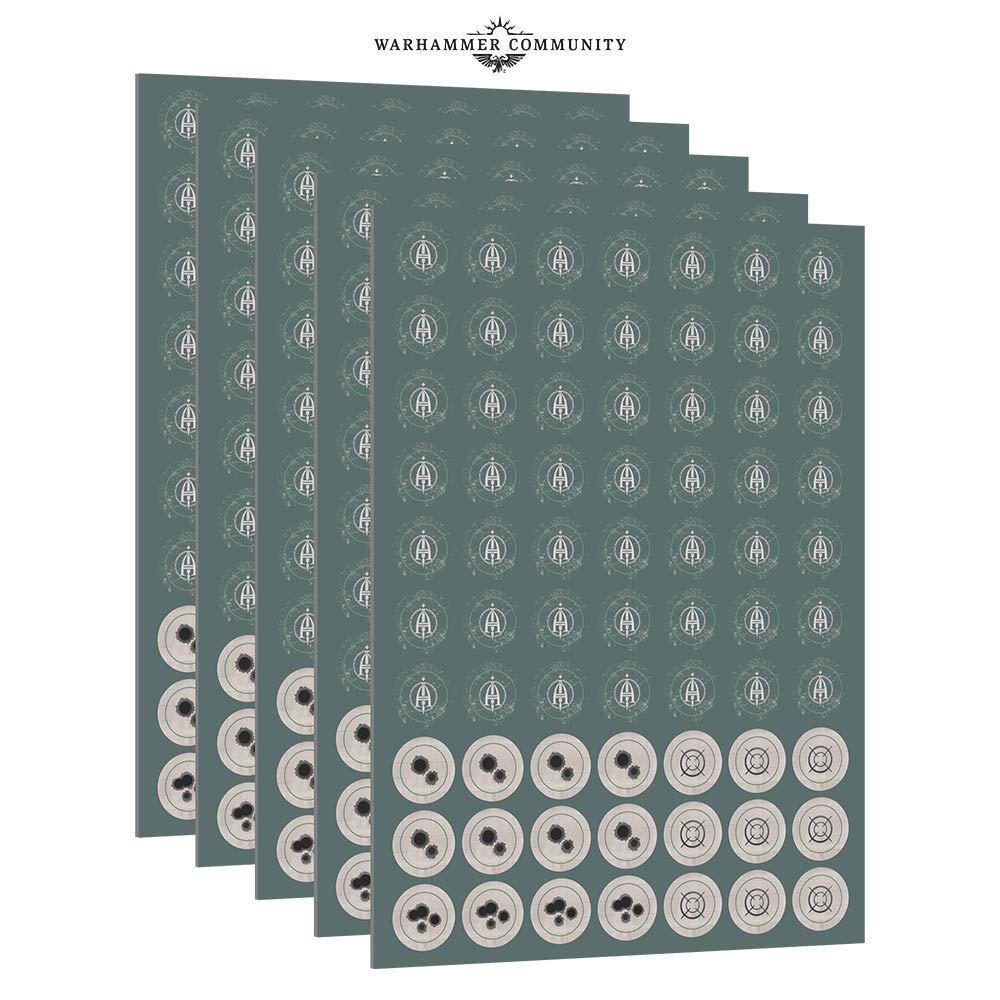 Last, but very far from least – can you really ever have enough dice? Absolutely not! You’ll be able to bolster your collection with a couple of sets designed especially for Aeronautica Imperialis – one for the Orks, and one for the Imperial Navy. 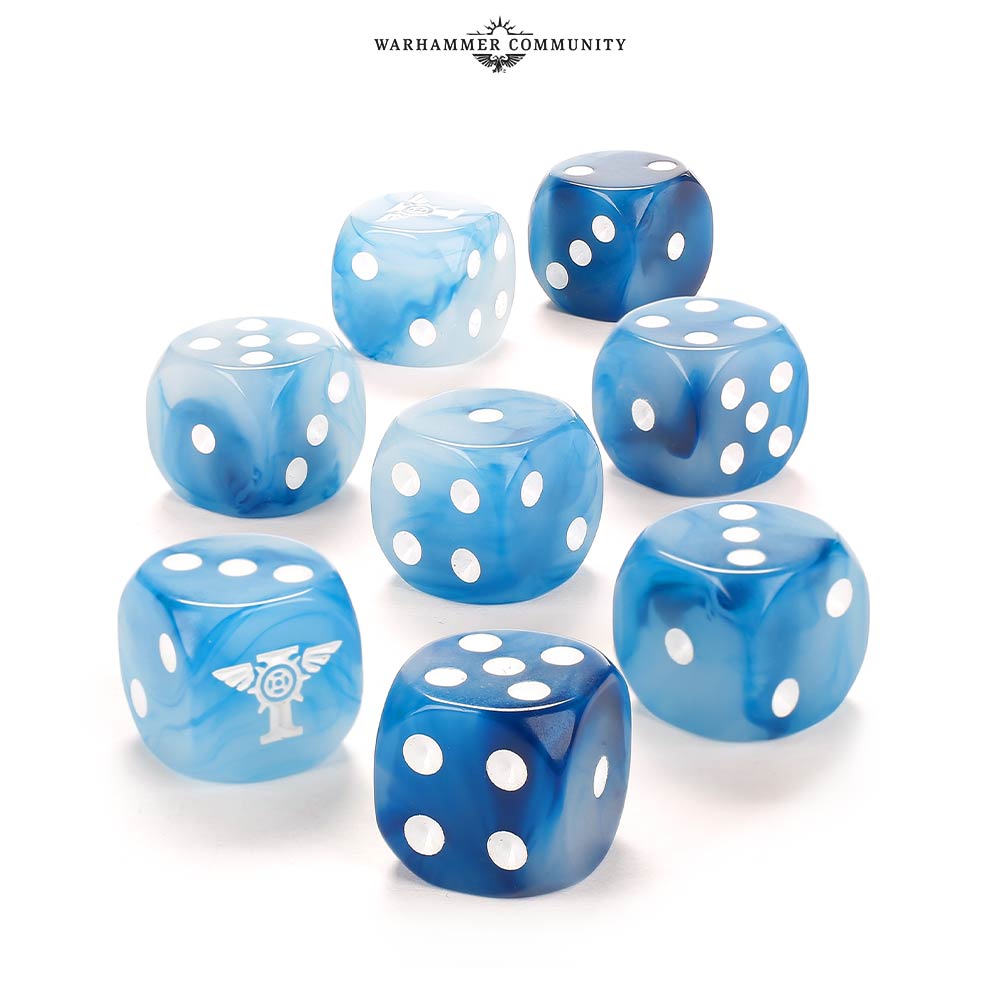 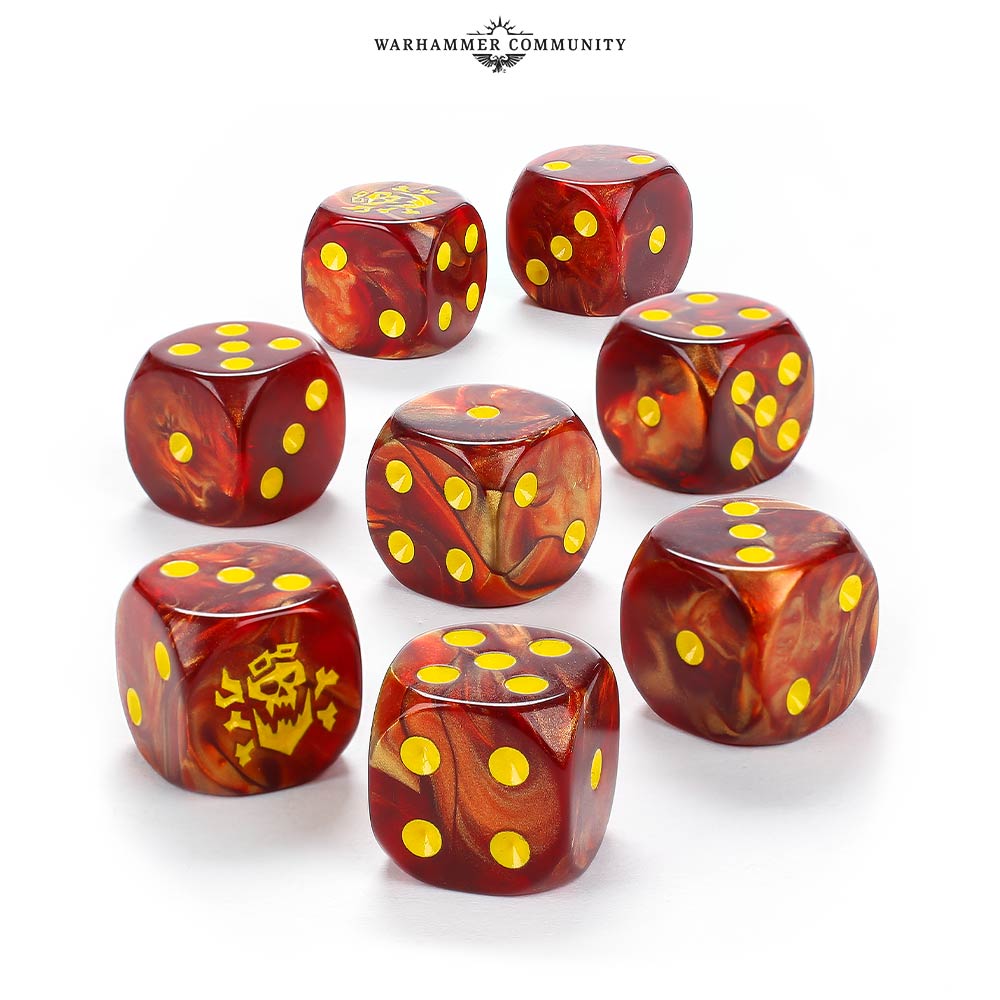 All this goodness will be available to pre-order next Saturday, on the 31st of August! Don’t worry if you can’t wait until then – we’ll be posting up loads of previews throughout next week to help you prepare. Check back tomorrow for the complete unboxing of Wings of Vengeance, and subscribe to our newsletter for all the latest Aeronautica Imperialis news delivered right to your inbox.