We have a load of awesome releases on the way from Games Workshop today! As discussed on last week’s podcast, Warhammer 40,000 Urban Conquest is available to order alongside a new scenery kit while over in the Mortal Realms we get the rest of the brand new Gloomspite Gitz range! 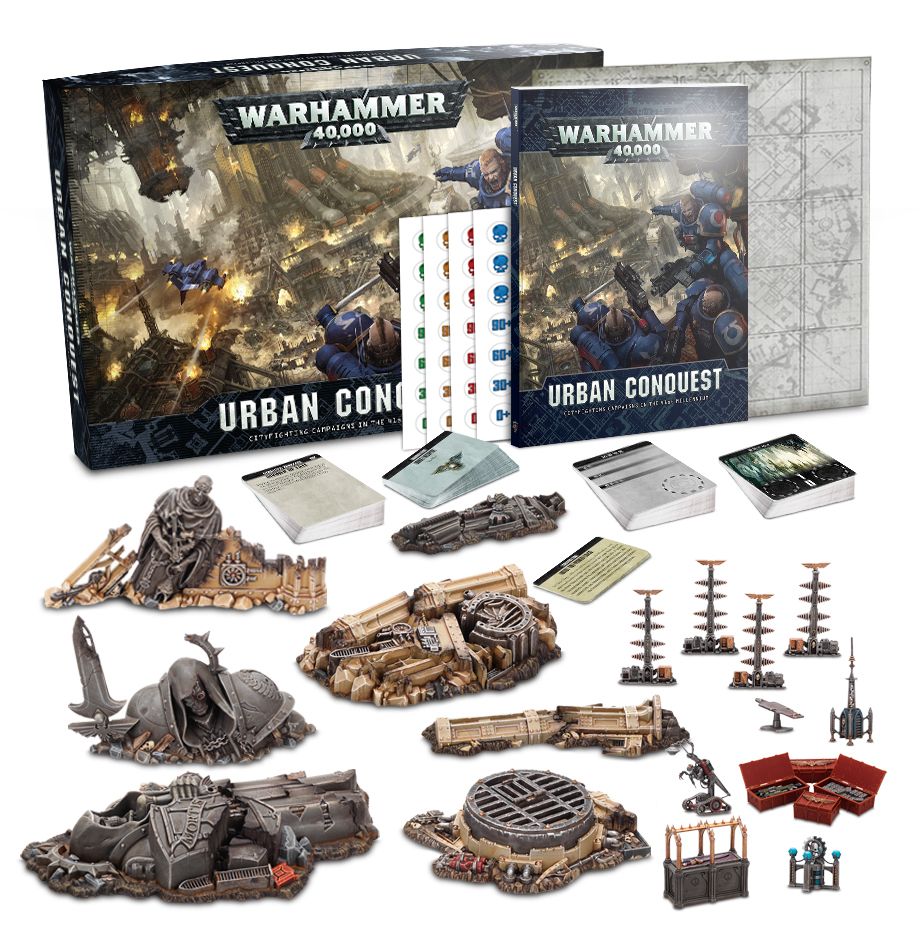 In a galaxy in which every planet is a bitterly contested war zone, cities make for the bloodiest of battlefields. Armies manoeuvre amidst the blasted ruins in claustrophobic and lethal environments. Death lurks in every window and waits around every corner.

Urban Conquest gives you everything you need to play thrilling campaigns of city-wide combat. Build your own metropolitan warscape with the cards provided, then participate in intense linked campaigns where you’ll battle to hold key strategic locations, each providing unique benefits to your forces. As an expansion for the game, a copy of the Warhammer 40,000 rulebook will be required to use Urban Conquest.

Inside the box, you’ll find:

– The Urban Conquest rulebook – your complete guide to running campaigns and recreating the urban battlescapes of the 41st millennium with a host of new rules.

– The Streets of Death cityscape map – a modular campaign map where you construct your own city using location cards.

– A set of plastic ruins and rubble, plus Cities of Death objectives for adding thematic flavour to your Urban Conquest campaigns.

This is warfare in the 41st Millennium at its most brutal. This is Urban Conquest. 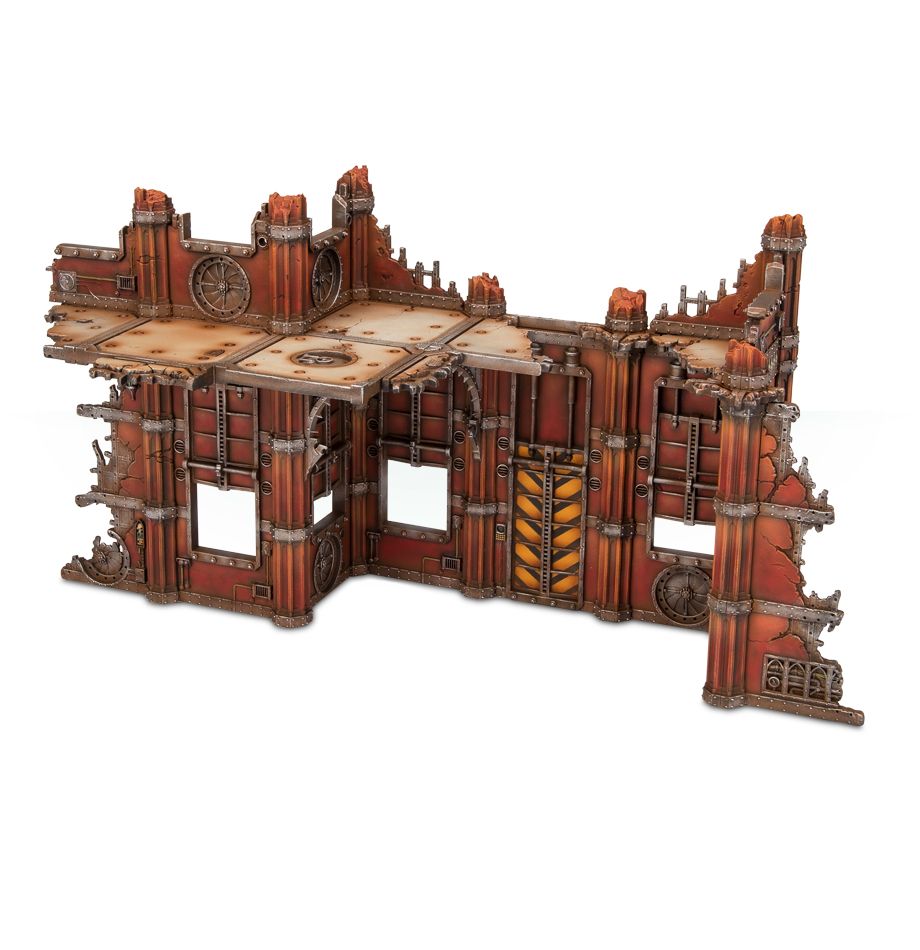 Manufactorums are factories responsible for producing everything from bolter rounds to Baneblades, and can be found on battlefields across the Imperium.

This highly modular kit lets you build and customise your very own manufactorum. Designed to be completely compatible with the Sector Imperialis and Sector Mechanicus kits, you’ll be able to use it to construct any kind of building you imagine, or combine it with other sets for even more ambitious projects. This set features a brand-new sprue with components that blend the aesthetics of the Sector Mechanicus and the Sector Imperialis, making it perfect for tying your collection together.

For gamers, this set adds another layer of tactical depth to your tabletop. You’ll be able to use it as cover for even larger models, or scale it with infantry for a height advantage on your foes. 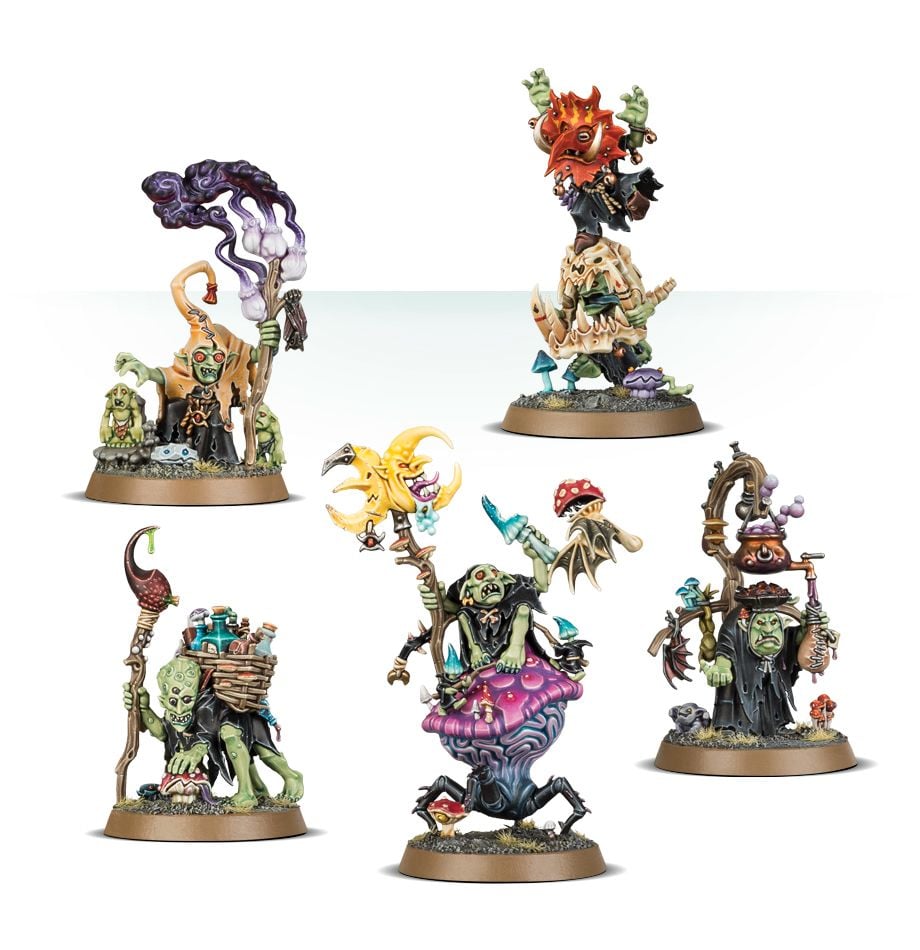 Most Moonclan leaders have at least one Gobbapalooza rambling around their lurklair causing mischief. Gatherings of so-called wise-grots, petty shamans and gabbling loonpriests, each Gobbapalooza takes it upon themselves to counsel their skrap’s boss whether he wants their advice or not.

This set lets you build an entire Gobbapalooza – a coven of grots who offer no end of cunning tactical tricks for your army. Taken as a single set but deployed as separate units, each has unique and powerful abilities. In this set you will find five heroes:

– The Scaremonger capers and hoots from behind his terrifying Glareface mask.

– The Spiker scuttles into battle with a basket of clinking poison-bottles lashed to his back.

– Spigots dripping, the Brewgit capers into battle with weird fungus potions bubbling in his loonshine still.

– The Boggleye stares deep into the souls of all those around them, chanting hypnotic mantras and revolving their pupils in an unlikely and hypnotic fashion.

– The Shroomancer experiences such vivid fungus-brew hallucinations that his magics spill out to animate the fungi around him and bring his visions to life.

These five grot Heroes are taken together, but function independently on the battlefield. They can also form the Gobbapalooza warscroll battalion, boosting their magic and unique abilities.

All 5 of the plastic models in this set are a treat for painters, each festooned with characterful detail and collectively making for a fantastic vignette that’ll be incredibly rewarding to work on. For builders, the kit features a wide variety of accessories for decorating your bases, including various fungi and even an animated rock!

This kit contains 44 components and comes with 5 x 32mm round bases. 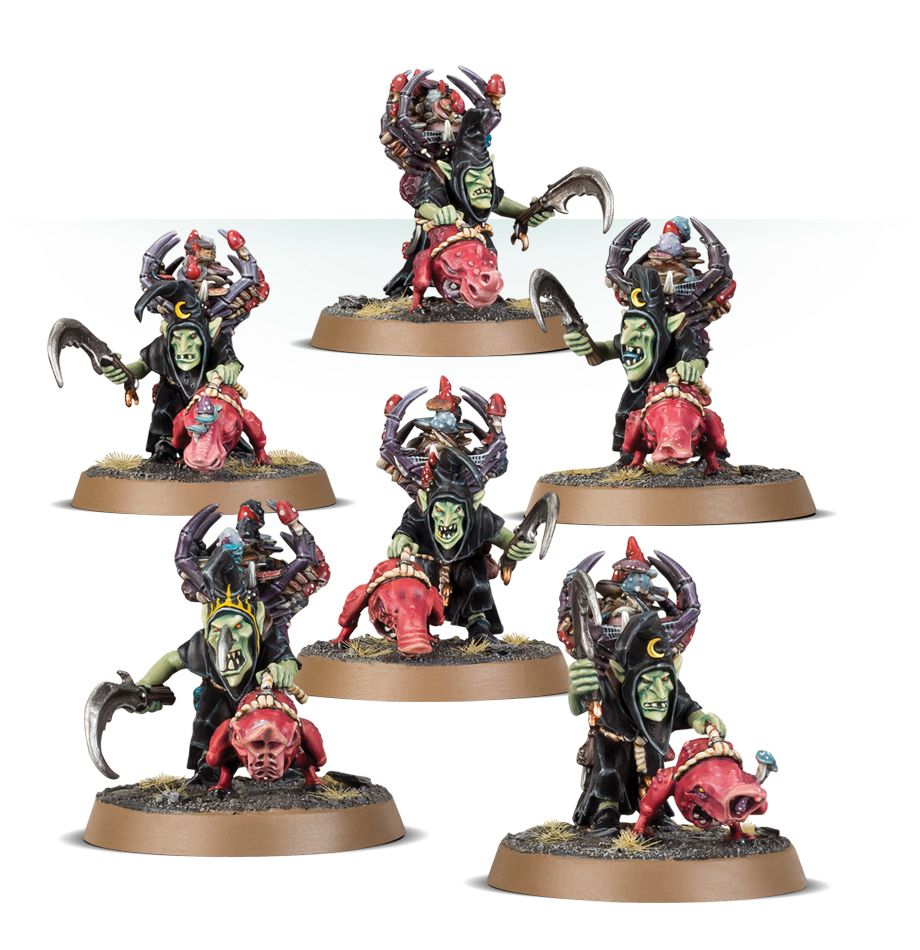 Dragged along by their eager snufflesquigs, Sneaky Snufflers harvest looncaps and other valuable magic fungi from the battlefield. They slash up anyone that gets in their way, and dole out mind-altering fungal treats to nearby grots for the fun of it.

These guys are an incredible unit in the Gloomspite Gitz, pushing your chosen units to fight harder by supplying them with deadly fungi. With a few Sneaky Snufflers nearby, even a unit of mere grots can be transformed into a terrifying force on the battlefield.

This kit lets you build and customise 6 Sneaky Snufflers, with their attendant snufflesquigs, and features a host of interchangeable heads for customising your models.

This kit contains 30 components and is supplied with 6 x 32mm round bases. 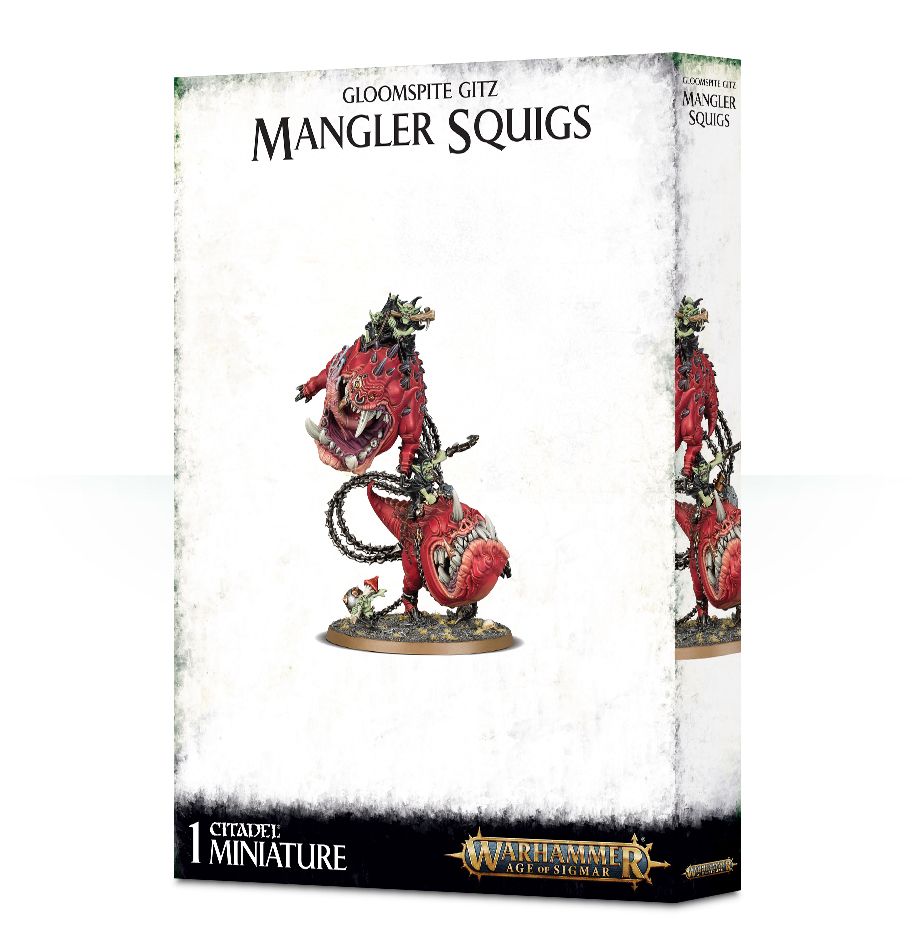 Possibly the most insane living weapons to be unleashed upon the Mortal Realms, Mangler Squigs crash, bound and roll across the battlefield leaving trails of torn and broken bodies in their wake.

This kit builds you your very own set of Mangler Squigs. These massive monsters have the offensive power to smash pretty much anything they encounter – there’s not a problem in the Mortal Realms that can’t be solved by throwing some Mangler Squigs at it!

This kit is packed with options for customising your Mangler Squigs, allowing you to bring to life the unique personality of each model. If you’re brave (or mad) enough to include more than one set of Mangler Squigs in your army, you’ll be able to make them look distinct with balls and chains, faces, armour plating and accessories for basing.

This kit contains 61 components and is supplied with 1x 80mm round base. 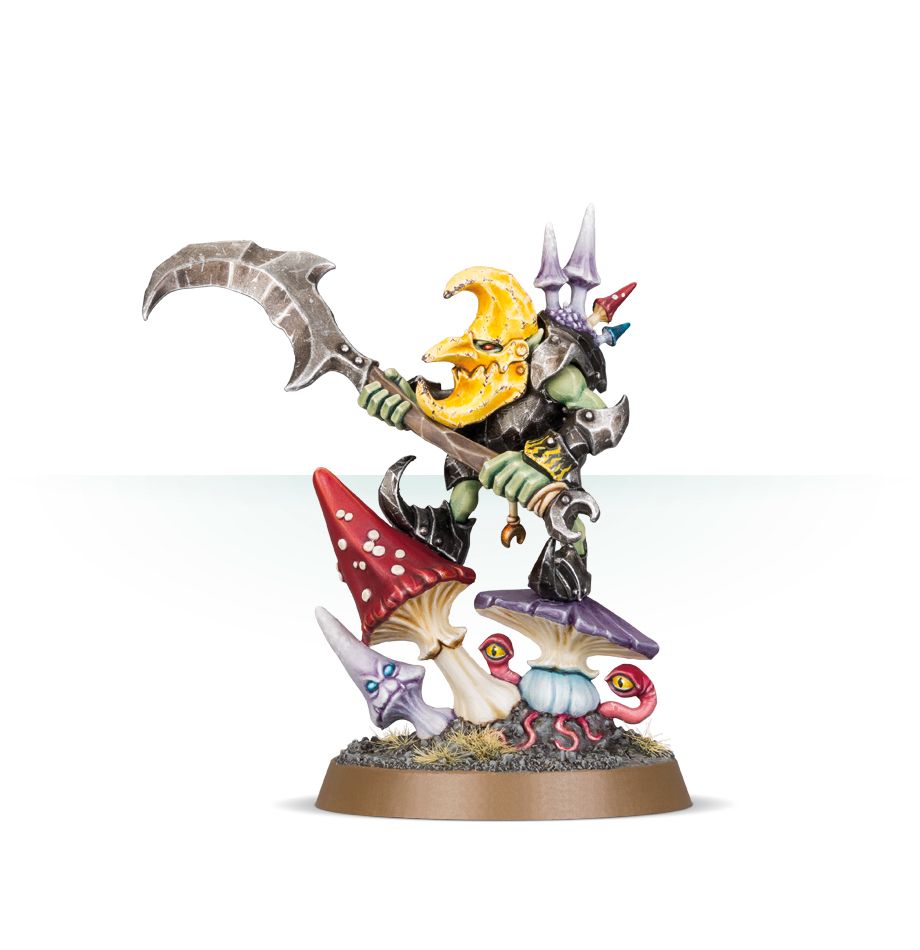 A Loonboss never fights fair, ducking and weaving around his enemies and hurling mobs of cackling grots at them to wear them down, before finishing them off with a blade to the throat or between the shoulder blades.

If you need a leader for your Gloomspite Gitz, you can’t go wrong with a Loonboss. This diminutive tyrant can push your Moonclan Grot units to fight harder, and is a surprisingly capable combatant should he find himself in a fight.

Covered in characterful detail, he’s a great project for a painter, or just any grot collector who can’t get enough heroes!

This model is supplied in 11 components and comes with 1 x 32mm round base. 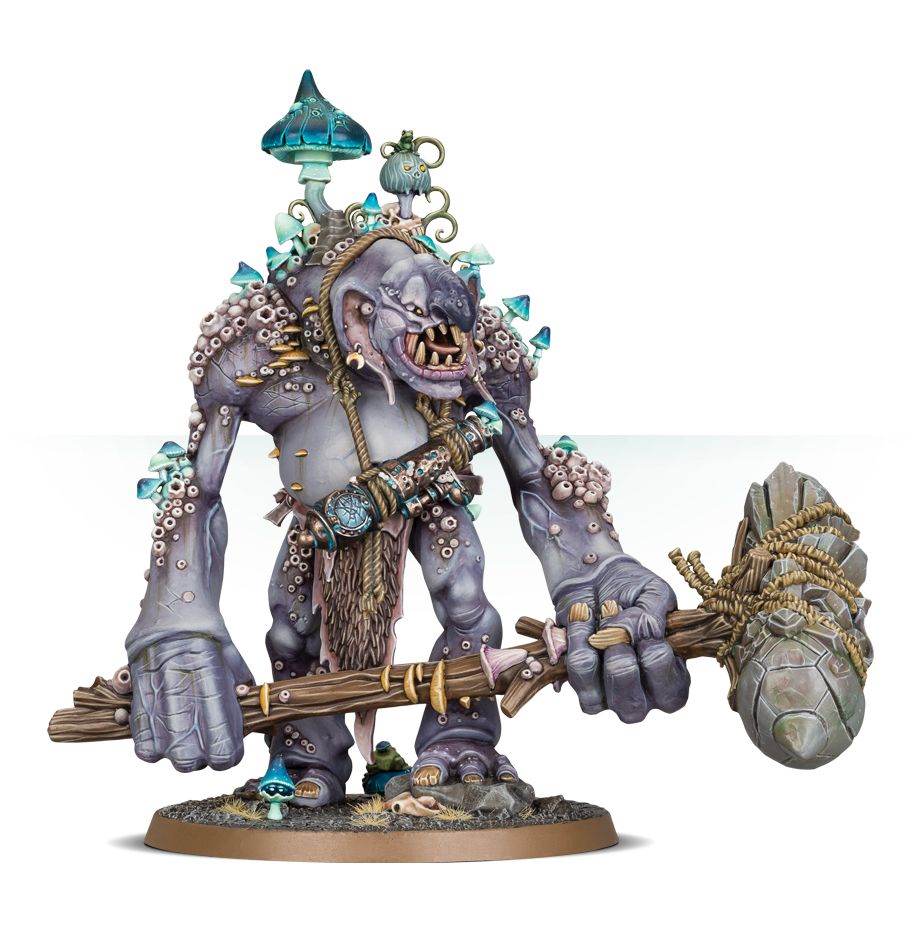 Dankhold Troggoths sleep deep underground until the Gloomspite moves them to lumber up to the surface and wreak havoc. They swat and crush everything within reach, soak up spellcraft like sponges, and are nigh unkillable in battle.

These massive Troggoths are tough enough to go toe to toe with the biggest monsters in the game and come out on top. Capable of regenerating wounds and shrugging off spells with ease, they’re perfect for any general looking to give their army a bit of extra punch – literally.

This kit allows you to build your miniature as a Dankhold Troggboss instead. Regardless of your choice of unit, you can customise your miniature with a variety of heads, weapons, arms and accessories for making your models look distinct – great if you’re looking to add multiples of these massive monsters to your army. The set also features a host of basing materials you can use on any of your Gloomspite Gitz models.

This kit contains 55 components and comes with 1 x 60mm round base. 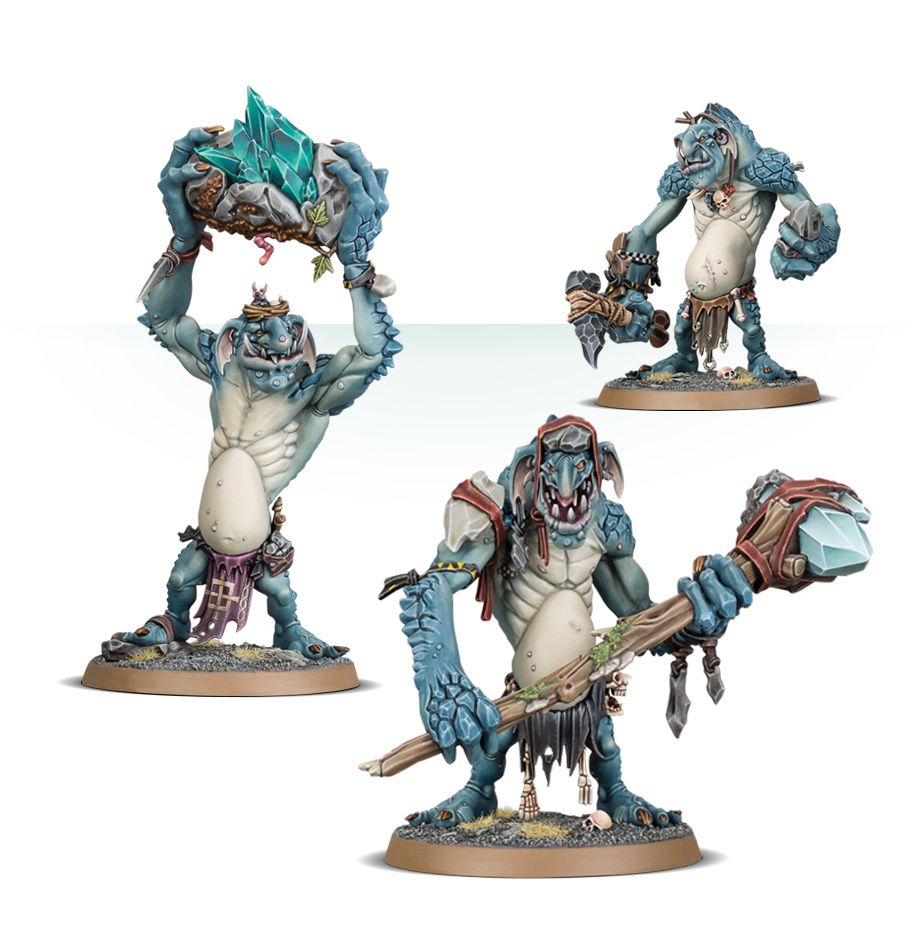 Rockgut Troggoths have stony hides that are proof against blade, bolt and magical blast alike. Their lumpen claws pass through stone as though it were water, allowing them to scoop up huge clubs and throwing boulders at will. Subtle they are not.

In battle, Rockgut Troggoths are incredibly durable, and a great way to tackle your opponent’s more dangerous units. They’re even deadly at range, thanks to their ability to hurl boulders at foes.

This kit allows you to build and customise three Rockgut Troggoths, featuring a huge host of components and interchangeable parts that allows you to make each one unique. With loads of heads, weapons and poses, you’ll be able to field a full army of these brutes without any two looking the same.

This kit contains 91 components and is supplied with 3 x 50mm round bases.