The time for us to return to the Realm of Chaos is here with the release of the eagerly anticipated Wrath and Rapture – pitting the forces of Khorne against the Daemons of Slaanesh!

Realm of Chaos – Wrath and Rapture 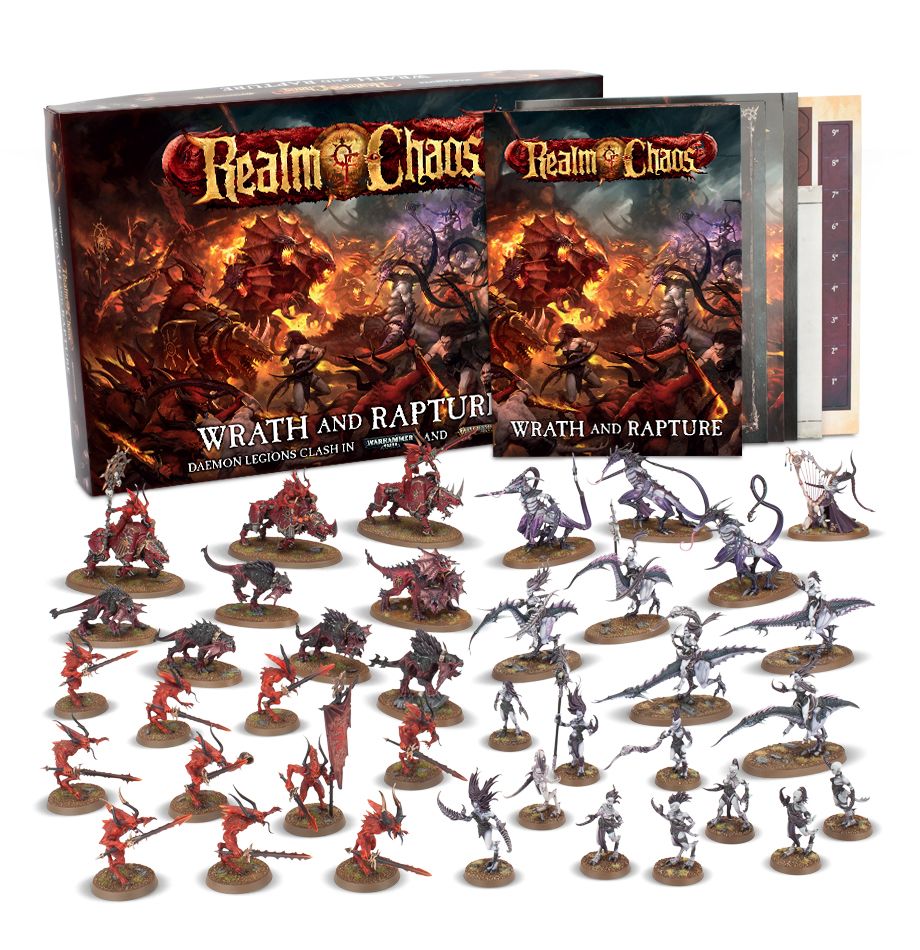 Wrath and Rapture, Rage and Pain, Violence and Grace. All of this and more can be found in the Realms of Chaos: Wrath and Rapture. This incredible set unleashes the uncontrolled fury of the Blood God, Khorne, and the seductive temptation of the Prince of Pleasure, Slaanesh. Not only do you get a host of daemonic minions that serve these rival Chaos Gods, but there are no less than three booklets that introduce new background and rules for both Warhammer Age of Sigmar and Warhammer 40,000! Here’s what you’ll find in the set:

– 38 Citadel Miniatures, including the following:

– A 24-page Wrath and Rapture booklet, describing the endless and ever-shifting dimension utterly devoid of reason and logic that is the Realm of Chaos (if such a thing is even possible). The concept of the Great Game played (and fought) between the Dark Gods is introduced, in which Khorne and Slaanesh are two of the fiercest rivals. There is an entire section of the nature of daemonic names, and there are also three tables of such names for you to generate for your Daemons.

– A 24-page Denizens of the Warp booklet, which introduces tales of murderous conflicts fought between the daemonic legions of Khorne and Slaanesh in the 41st Millennium. Also included are three Echoes of War missions and a campaign to help you refight these battles, as well as Stratagems and a full set of datasheets for the models included in the box.

– A 24-page Bane of the Mortal Realms booklet, describing an exciting storyline that led to bitter war between the rival Chaos powers and providing a trio of battleplans to refight them. It also includes full sets of warscrolls for all of the Khornate and Slaaneshi miniatures in the box, as well as their allegiance abilities and warscrolls, and two warscroll battalions.