Today’s Pre Orders -War of the Spider and a Zoat!

We have some great things up for Pre Order from Games Workshop today including the new Fabius Bile miniature alongside the War of the Spider book, and the first Zoat we have seen in decades! If you would like to support the site then why not order through our affiliate Element Games and save yourself 20% too! 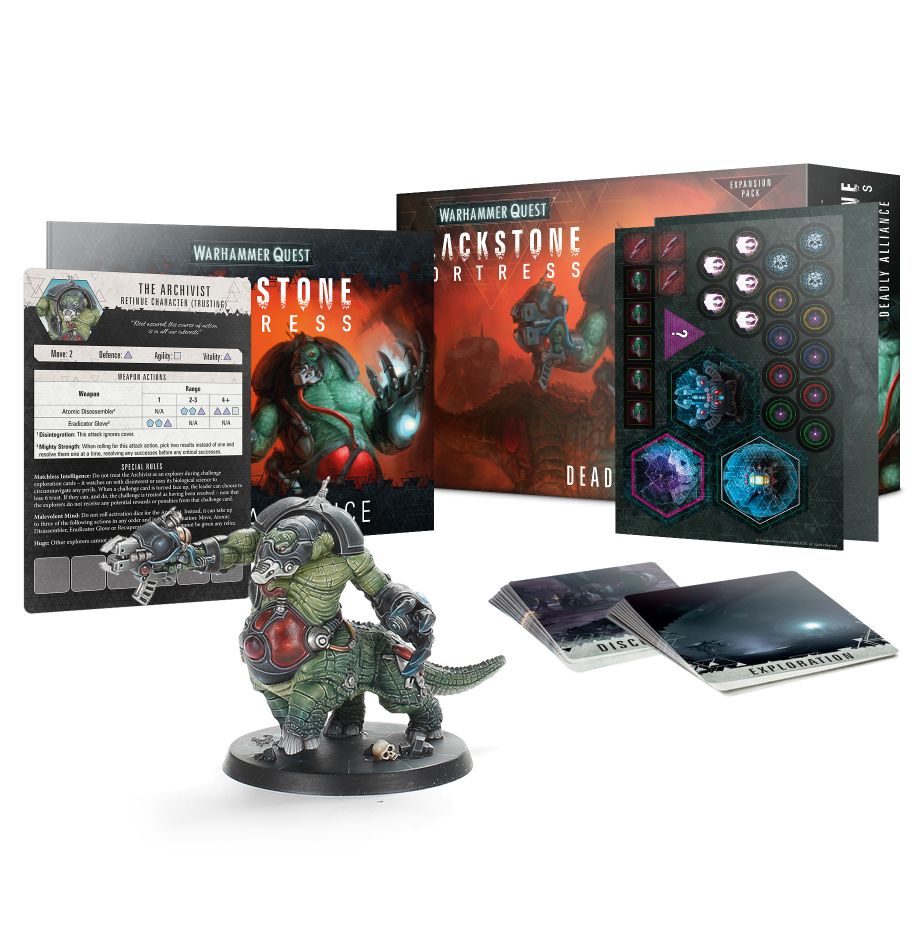 Deep in the bowels of the Blackstone Fortress a new danger arises, a riotous morass of shifting chambers riven by shardquakes. This is the Seethe, and it threatens any who enter it. An enigmatic figure offers to lead the denizens of Precipice to secrets which might end this horrifying phenomenon, but what will this Zoat demand in return?

More challenges await your intrepid explorers in this expansion to Warhammer Quest: Blackstone Fortress. Can you work with the mysterious Archivist to save the ancient space station? Along with a new quest to undertake, this expansion introduces the Trust mechanic to your games and also includes a number of cards that can also be used in other Blackstone Fortress quests. The box also includes The Archivist, a Zoat armed with an atomic disassembler and an eradicactor glove, who joins your party as a retinue character.

Rules for using The Archivist in games of Warhammer 40,000 are also included.

Psychic Awakening War of the Spider 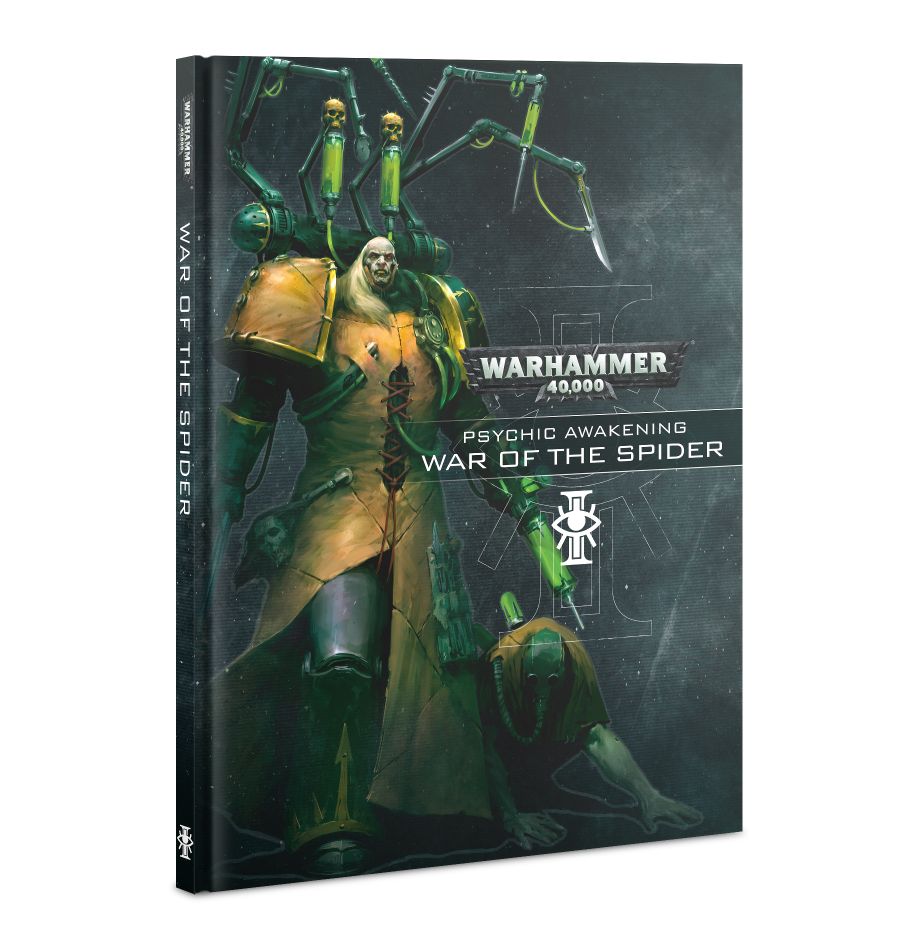 Book 8 of the Psychic Awakening series

The epic Psychic Awakening series continues with War of the Spider. This campaign book features a host of new rules for Chaos Space Marines, Death Guard, Talons of the Emperor and Officio Assassinorum. It also includes background on the web that Fabius Bile spins around the devastated Cadian system as he is pursued by the Death Guard, Adeptus Custodes, Sisters of Silence and multiple teams of Assassins. Will they catch him, or will he escape to continue his twisted experiments?

– Exciting background on how Fabius Bile brings his experiments to the already devastated worlds around the Cadian Gate. Meanwhile, the Death Guard hunt him, seeking to reclaim a mysterious artefact that he stole from them. In the midst of this, the Talons of the Emperor and agents of the Officio Assassinorum seek to end the Spider’s reign of terror for once and for all.
– Missions that allow you to recreate some of the most pivotal battles during the conflict, and war zones that let you bring your battles to some of the most distinctive sites that were fought over
– Expanded army rules for Chaos Space Marines, Death Guard, Talons of the Emperor and Officio Assassinorum, including Warlord Traits, Stratagems and Relics
– Includes a new datasheet for Fabius Bile 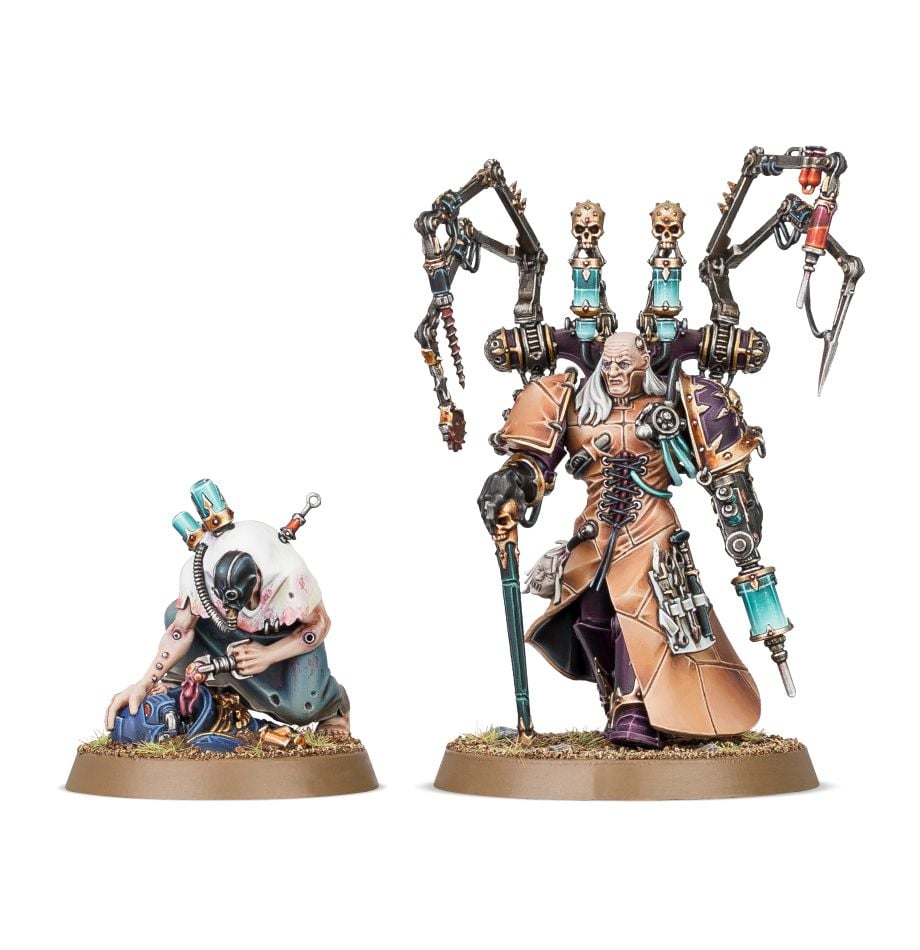 Clonefather. Primogenitor. Spider. Fabius Bile has laboured under many epithets during his long and wicked life, but none truly convey the unrepentant evil of this heretic crypto-scientist. A twister of flesh and a sculptor of nightmares, Fabius Bile is one of the most abominable renegades to blight the Emperor’s realm.

In command of Fabius, you can unleash gene-spliced horrors upon an unsuspecting galaxy, bringing your enemies to their knees. Bile is also more than capable of taking care of himself too, carrying as he does the deadly Rod of Torment. He can be accompanied by a Surgeon Acolyte, who assists him in his twisted work. This pair make an excellent modelling or painting project and are an excellent addition to a Chaos Space Marines army.

Rules for using Fabius and his Surgeon Acolyte can be found in Psychic Awakening: War of the Spider.