We have a bumper day of pre orders this week with everything from Necromunda to Warcry! Plus loads of previously Battle Box exclusive heroes for Age of Sigmar! If you want to help support the site then please order through Element Gamesand save yourself 20% too! 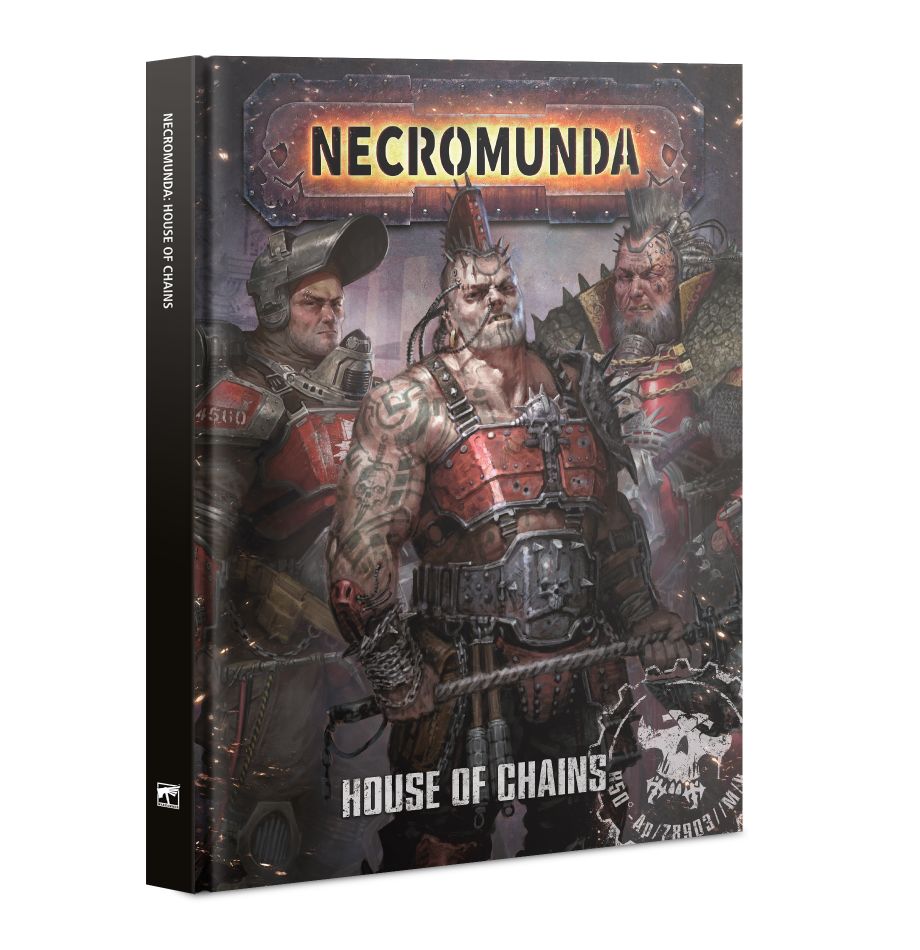 Strength is all for House Goliath. Without the physical strength to dominate rivals or to endure the hardships of Necromunda, a Goliath is nothing. They were created as a slave race to work the refineries and forges of Necromunda and toil in places where even hardy Necromundans could not survive. While the members of the clan are practically abhuman in their size and strength, only fools underestimate their resourcefulness and low cunning. It was the folly of their creators, who believed the Goliaths could be kept docile and ignorant though genetic meddling, that allowed elements of the clan to gain their independence.

Get the ultimate guide to the youngest of the six clan houses on Necromunda. This 160-page hardback book features the definitive history of the House and rules for fielding the six different types of fighters available to House Goliath – Forge Tyrants, Forge Bosses, Stimmers, Forge-born, Bruisers and Bullies. It is ideal for fans of House Goliath or anyone who wants to delve deeper into the dark side of the underhive.

This is an expansion to Necromunda – the Necromunda Rulebook is required to use the contents of this book. 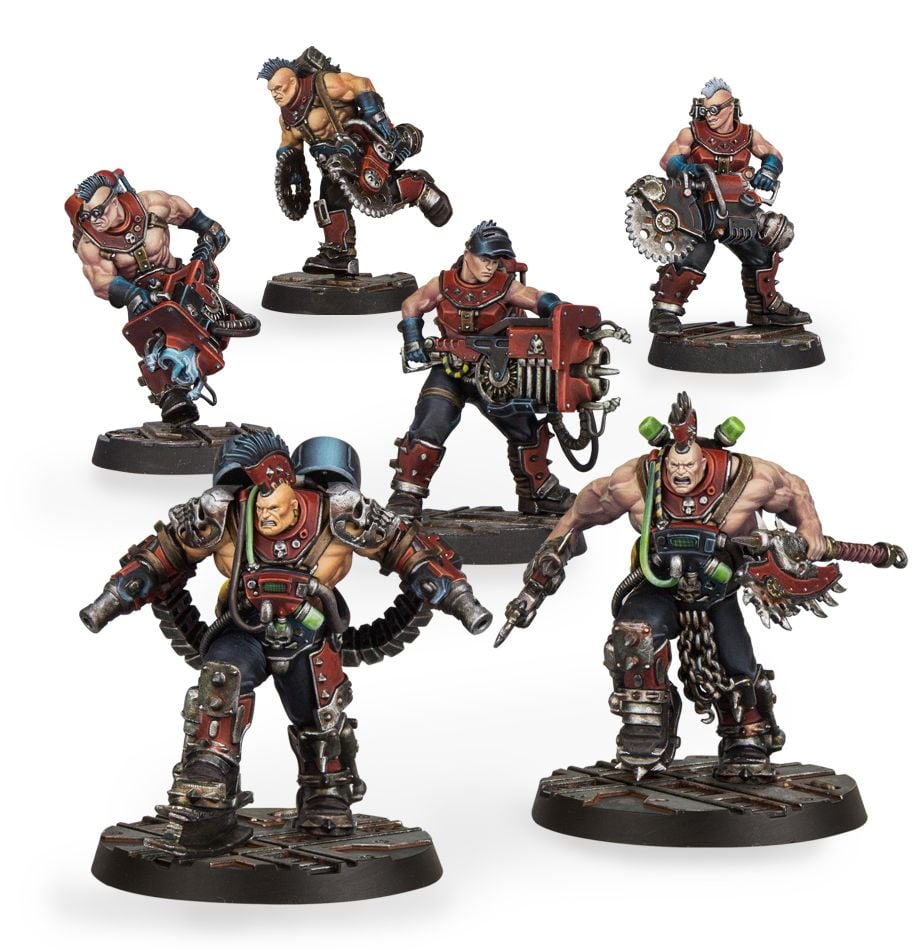 In House Goliath, Stimmers are established gangers. While seeking to achieve the peak of the Goliath’s aspirational physical and musculature performance, they have become addicted to growth and combat stimms. Meanwhile, Forge-born, are gang prospects. They have not yet proven themselves to the Goliath, so they are not yet fully inducted into the Goliath Gang culture. As such, they often undertake the more dangerous tasks for the gang in an effort to prove themselves.

Expand your Goliath Gang with these six additional fighters. As with all members of the House of Chains, they excel in fighting up close and personal. Stimmers are those gang members who have eschewed the path of leadership and instead focus on the mastery of brutal violence, while Forge-born are the hot headed youths who will be the future of the gang.

Rules for using the Goliath Stimmers and Goliath Forge-born in games of Necromunda can be found in Necromunda: House of Chains. 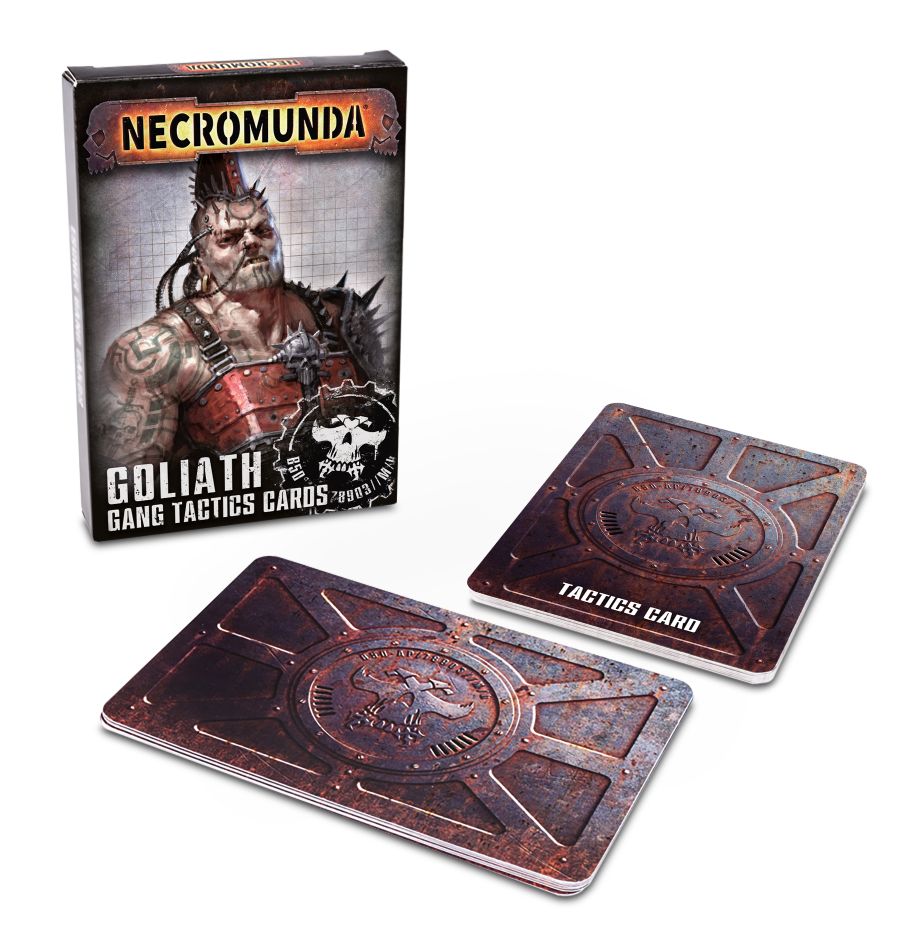 Expand your games of Necromunda with these 26 cards, representing the myriad tricks and schemes that can be used to gain an advantage in the underhive. As well as gang-specific tactics cards for House Goliath, there are also a set of blank fighter cards. 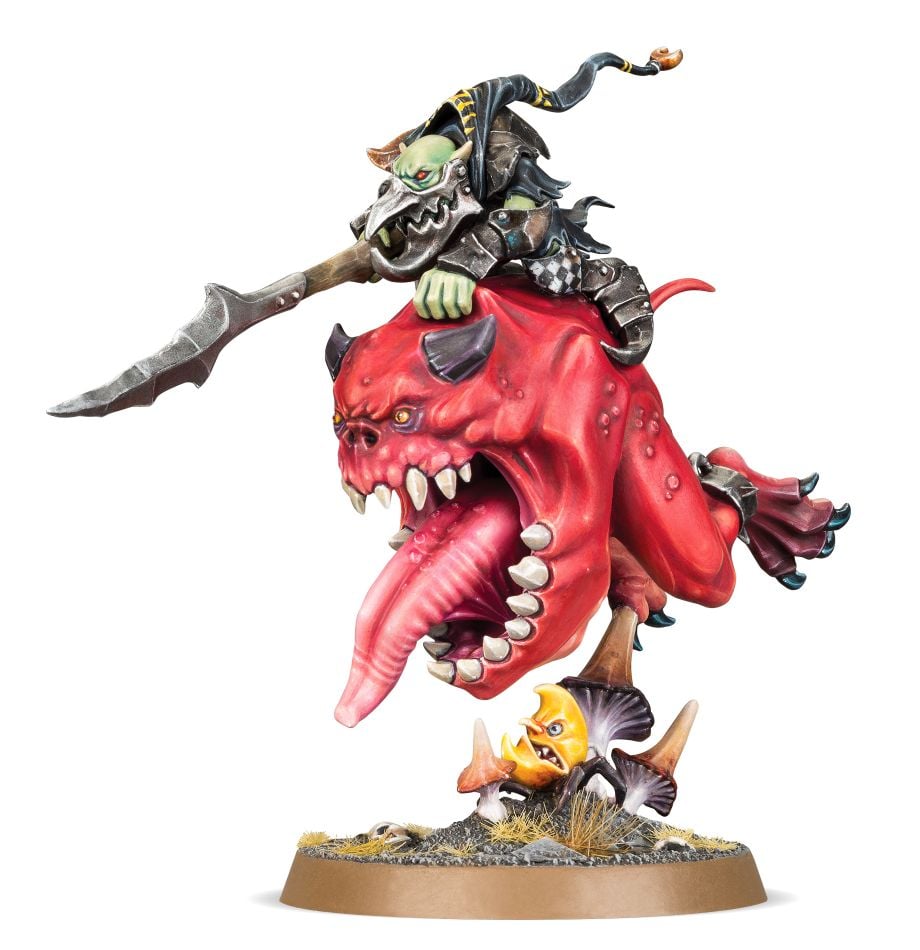 If you’re looking for a leader for your squiggly legions, you can’t go wrong with the Loonboss on Giant Cave Squig! This bouncing bringer of death is both a deadly combatant in his own right and a cracking commander for any army using loads of Mangler Squigs, Squig Hoppers and Boingrot Bounderz, keeping pace with the rest of your fungal forces and shouting at them to go even faster. You can build your Loonboss on Giant Cave Squig with a Moonclan stabba or a moon-cutta, based on your tactical (or aesthetic!) preferences.

This plastic kit is supplied in 21 components, and comes with a 40mm round base. 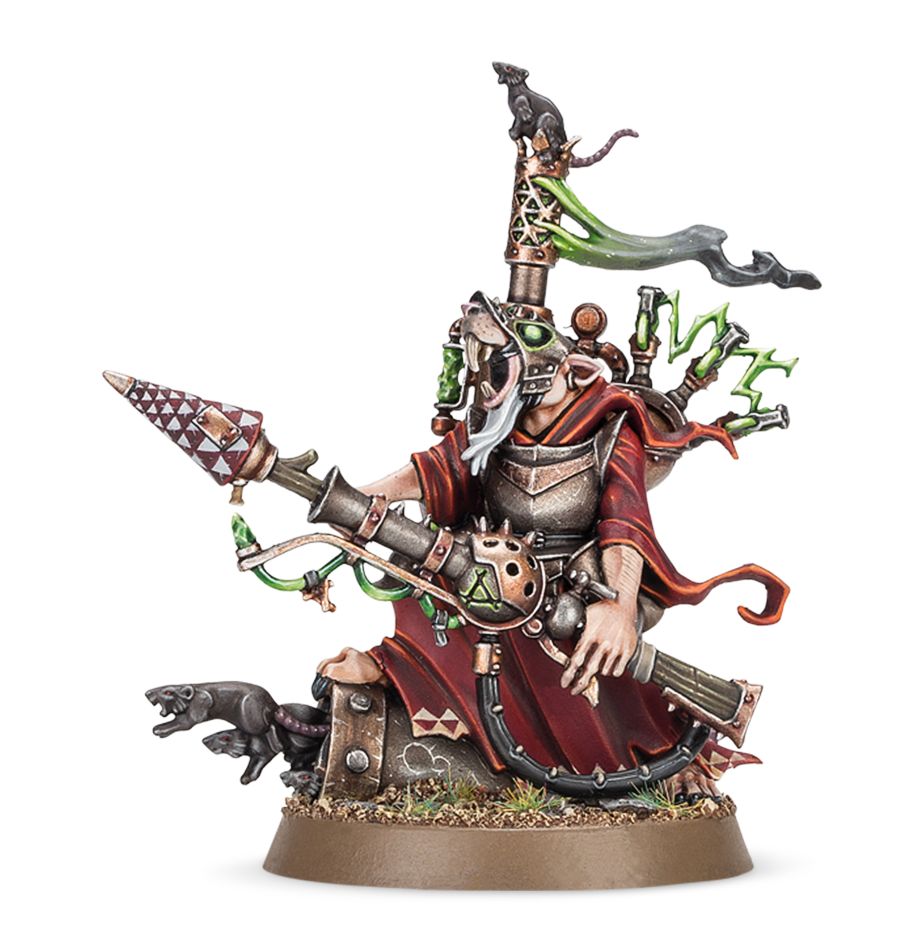 Warlock Bombardiers are those engineers who develop a particular penchant for weapons that deliver explosive death from extreme range. Their alchemical armaments cause utter devastation wherever they strike home.

Part wizard, part artillery, all Skaven ingenuity – the Warlock Bombardier is a fantastic supporting Hero for your Skaven army. Ideal for supporting Warp Lightning Cannons, Stormfiends and Warplock Jezzails, the Warlock Bombardier blasts your enemies (and, occasionally, itself) apart with their doomrocket while zapping them with lightning for good measure. If you’re looking to field one of the skaven’s most unpredictable (and deadly!) Heroes, this is the model for you.

This kit is supplied in 8 plastic components, and comes with a 32mm round base. 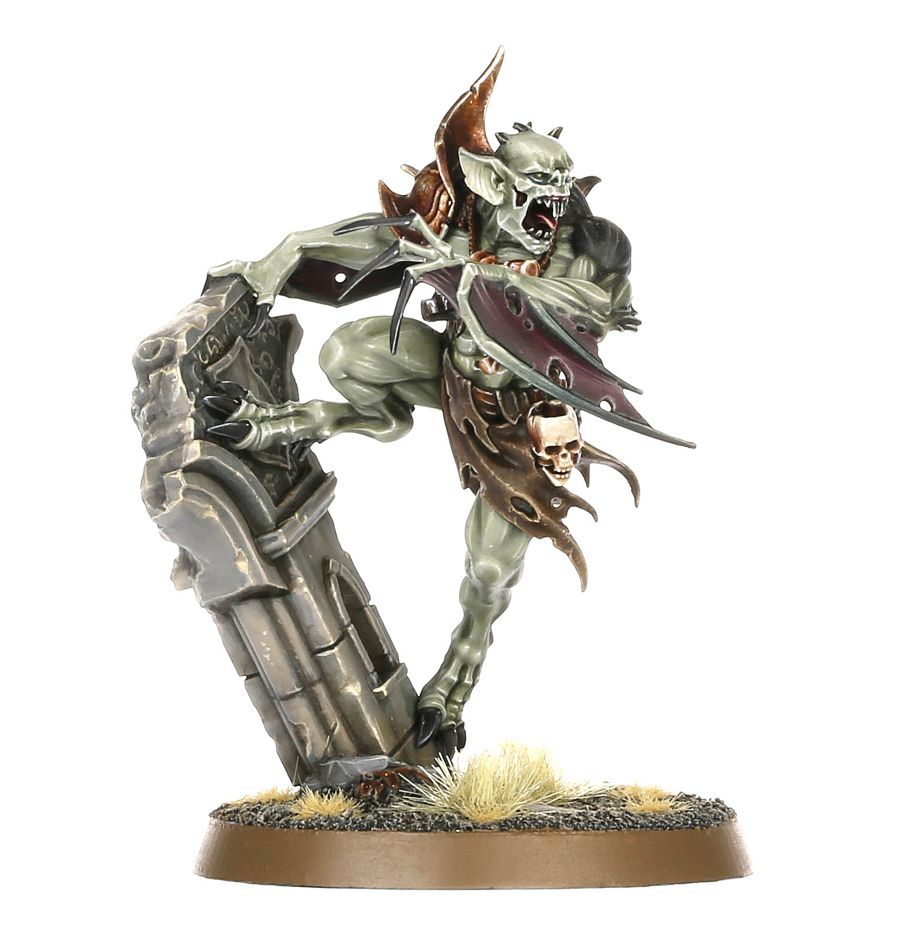 Archregents are Ghoul Kings who have ruled for hundreds upon hundreds of years, growing terrifyingly powerful. They are mighty vampiric warrior-kings and are accustomed to instant obedience from all those around them.

Warrior. Wizard. Commander. The Abhorrant Archregent is all of these and more – an essential Leader for any Flesh-eater Courts force who shreds enemies up-close, adds reinforcements to your army and even casts spells in the hero phase.

This kit is supplied in 9 plastic components, and comes with a 40mm round base. 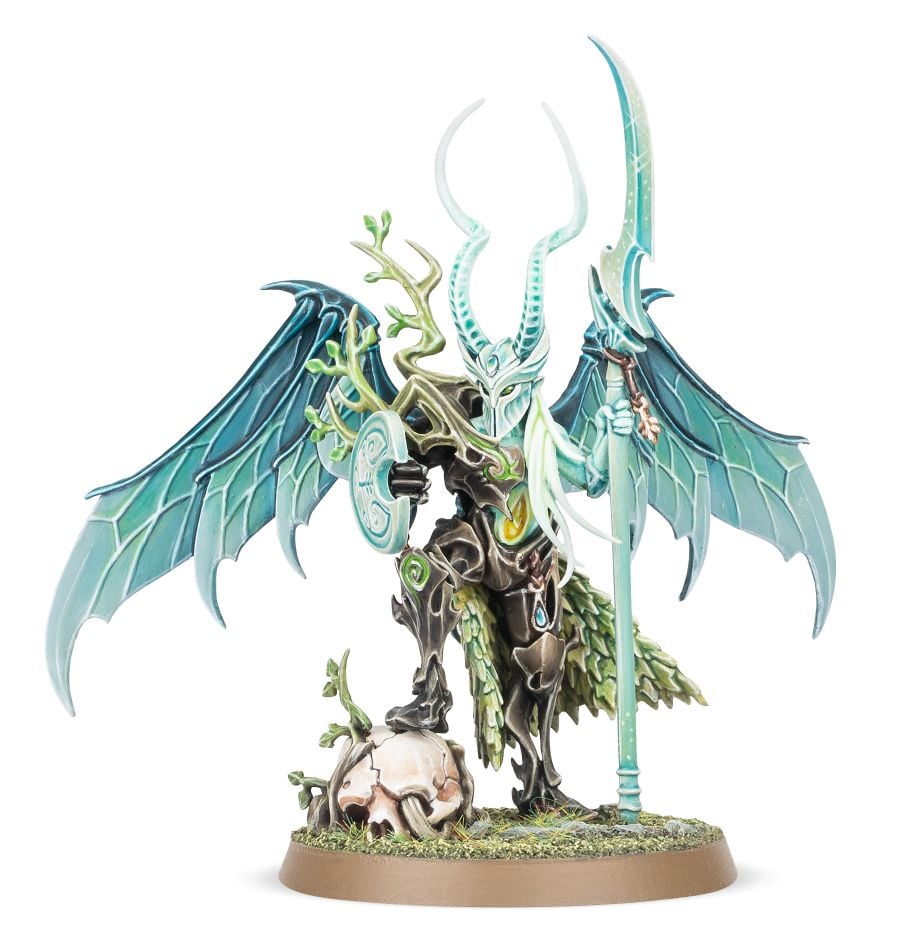 Arch-Revenants soar high over the battlefield, borne upon the wings of a zephyrspite. Swooping down to strike where the foe is most vulnerable, their regal presence inspires nearby Sylvaneth, filling them with courage and warlike aggression.

Arch-Revenants are brilliant front-line commanders for your Sylvaneth force. Mobile and pretty nifty in melee, these bringers of Alarielle’s vengeance are great for flitting up and down your front line while picking off particularly dangerous enemies and making your Kurnoth Hunters fight even harder.

This kit is supplied in 18 plastic components and comes with a 40mm round base. 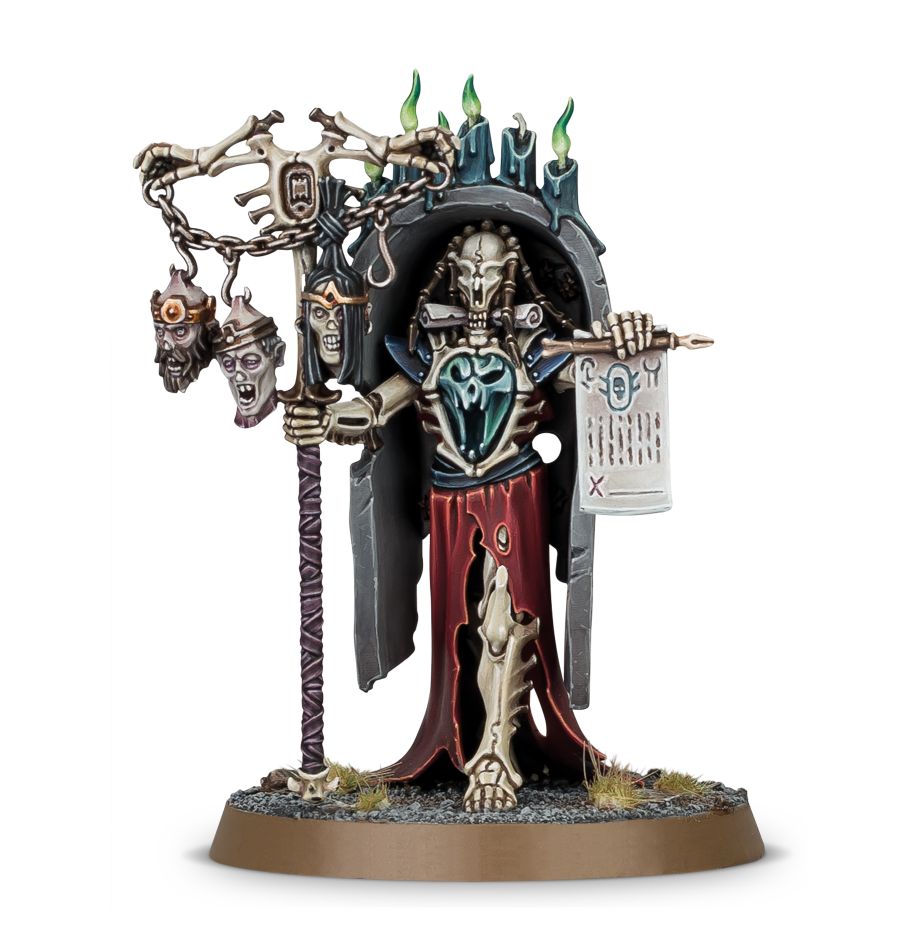 It is Vokmortian’s task to oversee the harvesting of bones for the Ossiarch legions, a duty he undertakes with ruthless, calculating precision. Those who defy the will of the Great Necromancer are cut down with flesh-withering bolts of necromantic magic.

Whether you’re looking for a capable commander for your Ossiarch Bonereapers or just a cracking little painting project, Vokmortian, Master of the Bone-tithe is a great model for you. On the battlefield, Vokmortian can slay enemies instantly with a touch (seriously – check the warscroll!) as well as disrupting your foe’s Wizards.

This kit is supplied in 9 plastic components and comes with a 40mm round base. 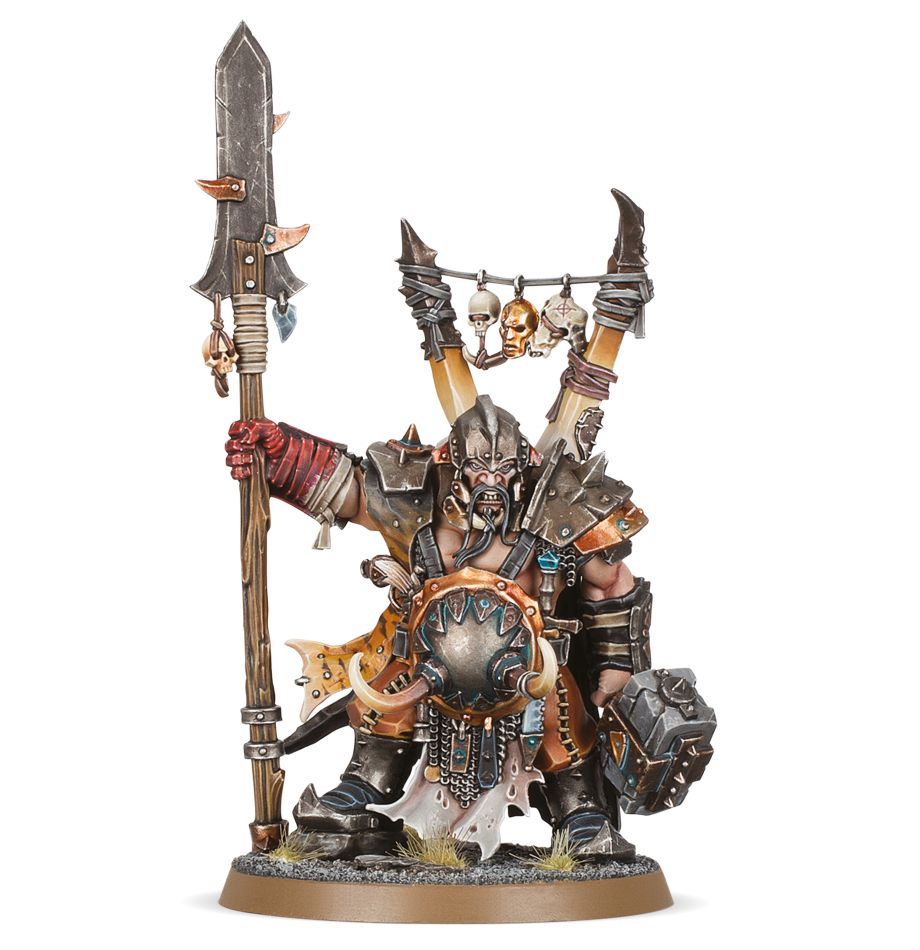 The ferocious war-leaders of the Gutbuster warglutts, Tyrants are living mountains of iron and blubbery flesh. Despite their girth, they move with surprising speed, hacking their prey into bloody chunks for easier consumption.

Tyrants are great leaders for any Ogor army, particularly those using loads of Gutbusters units like Gluttons, Ironguts and Gnoblars. Savagely effective fighters who can go toe-to-toe with even the toughest enemy Heroes, Ogor Tyrants can also shield your units from battleshock tests, letting them stay in the fight for longer. Meanwhile, a wealth of detail makes this model a pleasure to paint and an excellent display piece for your collection.

This kit is supplied in 14 plastic components and comes with a 50mm round base. 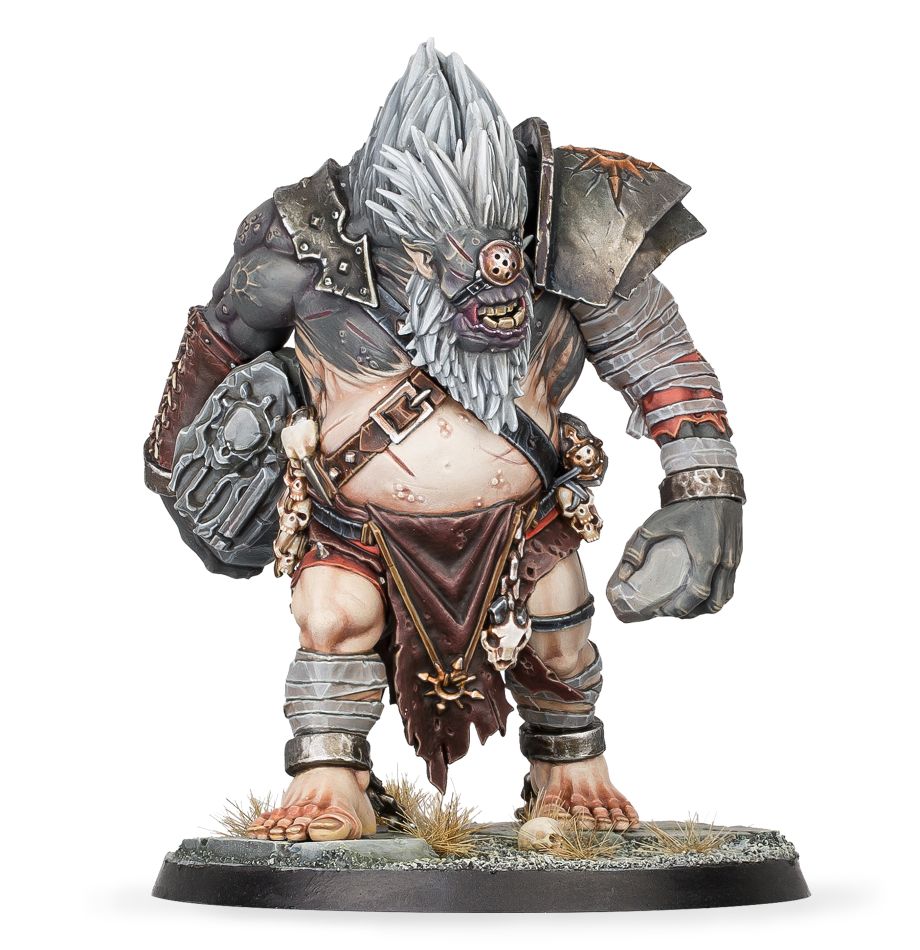 Brutish creatures from a lost age, the Fomoroid Crushers now exist only to tear down and destroy. In battle they fly into a terrible rage, torturous memories of the creatures they once were lending their blows a maddened strength.

This model can also be added to a Slaves to Darkness army for Warhammer Age of Sigmar, where it’s a deadly shock unit capable of smashing through scenery with superb effect. A variety of build options including heads and arms means that you can add multiples of these bulldozing brutes to your force while ensuring no two look alike.

This set is supplied in 21 plastic components and includes a 60mm round base. This set also contains the fighter card and abilities card for the Fomoroid Crusher. 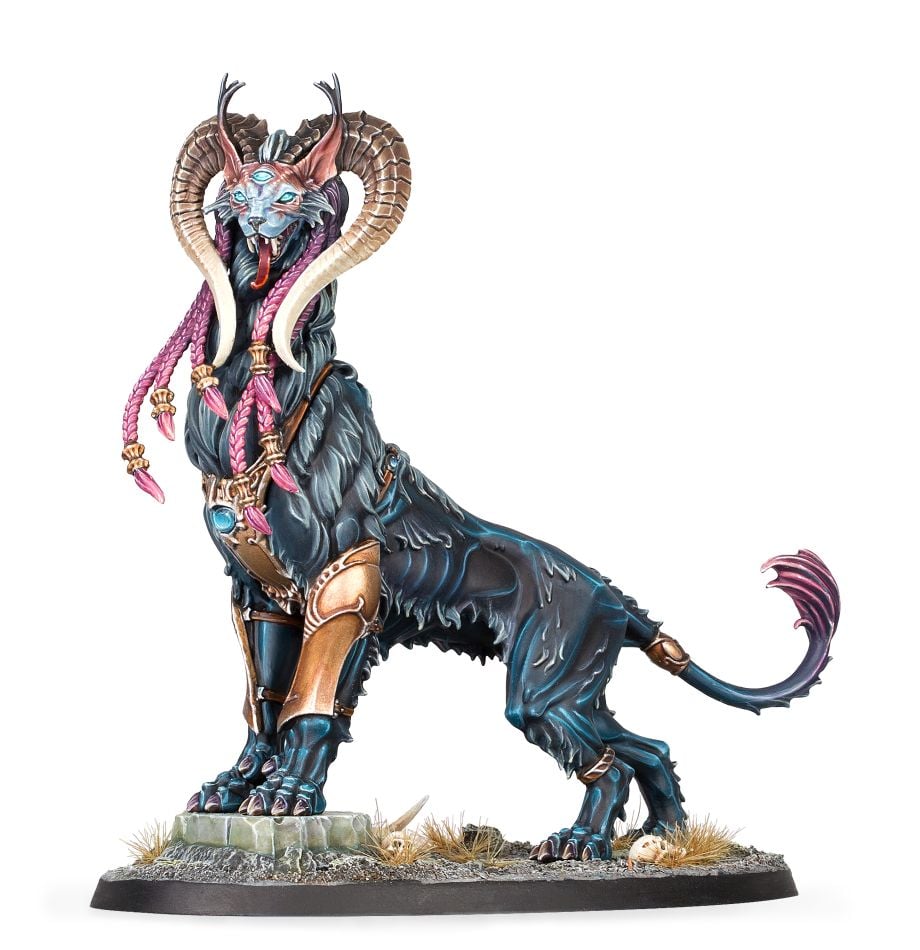 Mindstealer Sphiranxes are powerful and sinister telepaths. These cruel-hearted beasts enjoy nothing more than toying with their prey, plundering their innermost secrets before summarily ripping them to shreds with sharpened claws.

This model can also be added to a Slaves to Darkness army for Warhammer Age of Sigmar army, where it’s a valuable support choice capable of shutting down key enemies and forcing them to fight last. A choice of head and horn assembly options even gives you some choice when building this hypnotic horror!

This set is supplied in 22 plastic components and includes a 90mm oval base. It also includes a fighter card and an abilities card for the Mindstealer Sphiranx. 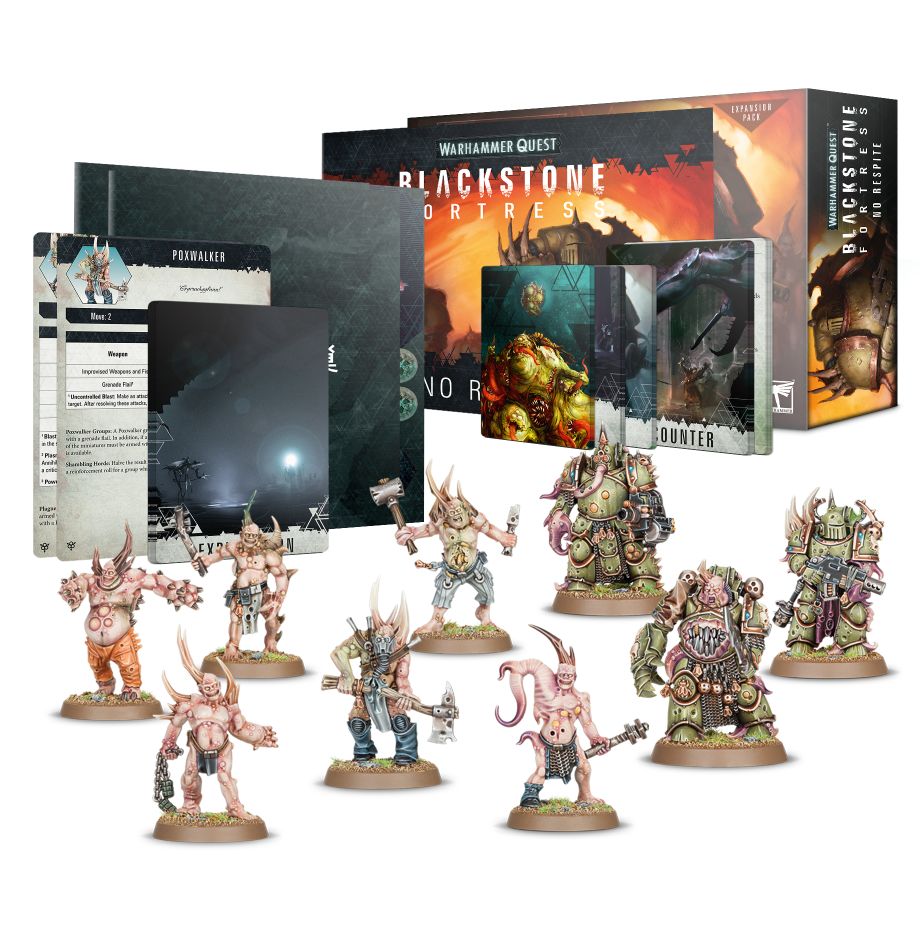 A daemonic rot grows inside the Blackstone Fortress. The Infested Brethren – foul servants of the Plague God, Nurgle – have made their way to the uncharted reaches of the Western Reaches, and now worm their way through the ancient station like maggots through a bloated corpse.

Father Nurgle’s blessings reach the Blackstone Fortress and even spread as far as Precipice and only your explorers can stop the rot! As well as the Quest to End the Plagues, No Respite also features rules for using Poxwalkers and Plague Marines in your other expeditions.