The next season of Warhammer Underworlds is now available to pre-order! Some really awesome stuff on the way and we can’t wait to try it out! Don’t forget to order from Element Games to help support the site and save yourself some cash too! 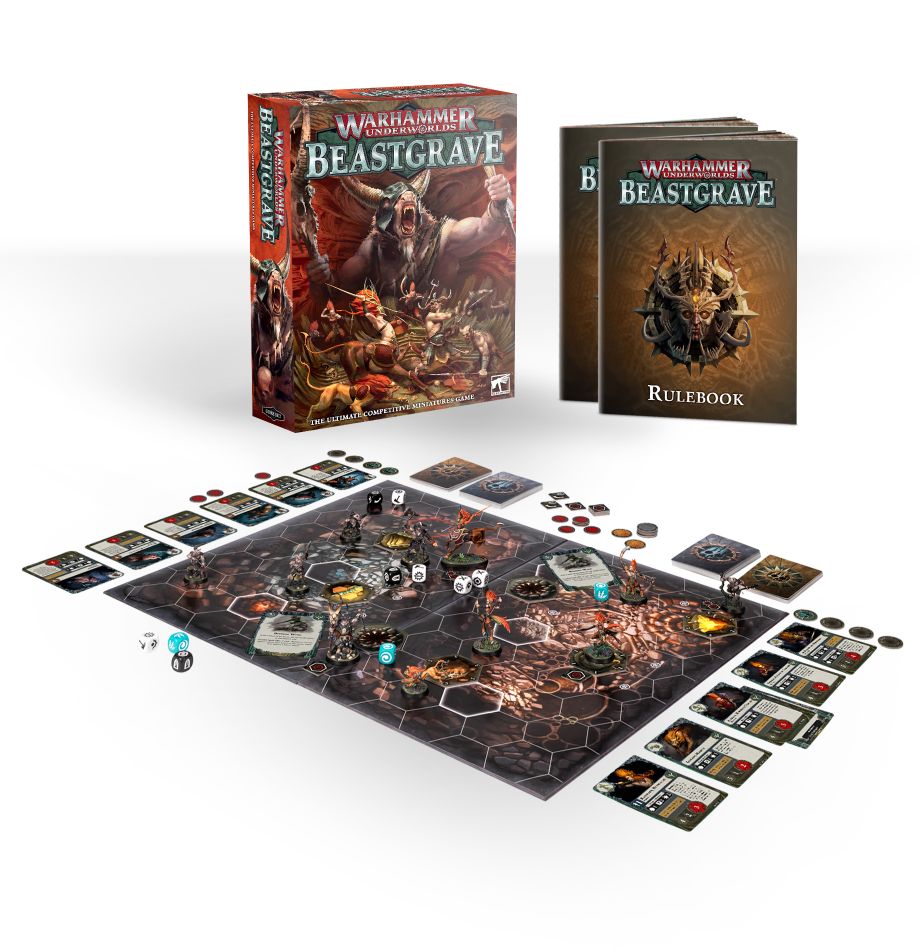 Enter the ultimate competitive miniatures game with the Warhammer Underworlds: Beastgrave core set. Inside, you’ll find everything you need to start gaming in the depths of Beastgrave, with dice, models, cards and more.

– The complete and updated rules for Warhammer Underworlds, updated from Warhammer Underworlds: Nightvault to be clearer, sharper and tighter than ever before, featuring thrilling new game mechanics like movable lethal hexes, as well as containing lore and art that explores Beastgrave itself.
– The complete Grashrak’s Ravagers warband – a pack of deadly beastmen looking to slay any who enter Beastgrave. Build your brayherd with 6 push fit plastic models, cast in brown plastic to ensure they stand out even when unpainted, plus fighter cards and a number of warband-specific cards that let you unleash their savage strategies in battle.
– The complete Skaeth’s Wild Hunt warband – a group of Kurnothi hunters with strange, nature-given power and ferocious prowess. Build your Kurnothi with 5 push fit plastic models, cast in green plastic, and build your decks with fighter cards and a number of warband-specific cards that let you harness their verdant power in battle.
– 2 double-sided gameboards that can be used to assemble your battlefield.
– (Probably) all the Warhammer Underworlds tokens you’ll ever need, including objectives, wound markers, glory points and much, much more.
– Dozens of Universal cards – gambits, objectives and upgrades that can be used by any warband, perfect for deck-building with Grashrak’s Ravagers and Skaeth’s Wild Hunt or bringing your favourite warband into Warhammer Underworlds: Beastgrave.
– 11 Dice – 5 Attack dice, 3 Defence dice and 3 Magic dice, enough for the most devastating blows, desperate defences and cataclysmic spells!

Whether you’re a new player looking to start your journey, or a veteran gamer looking to update your game for Season 3, this set is a must-have. 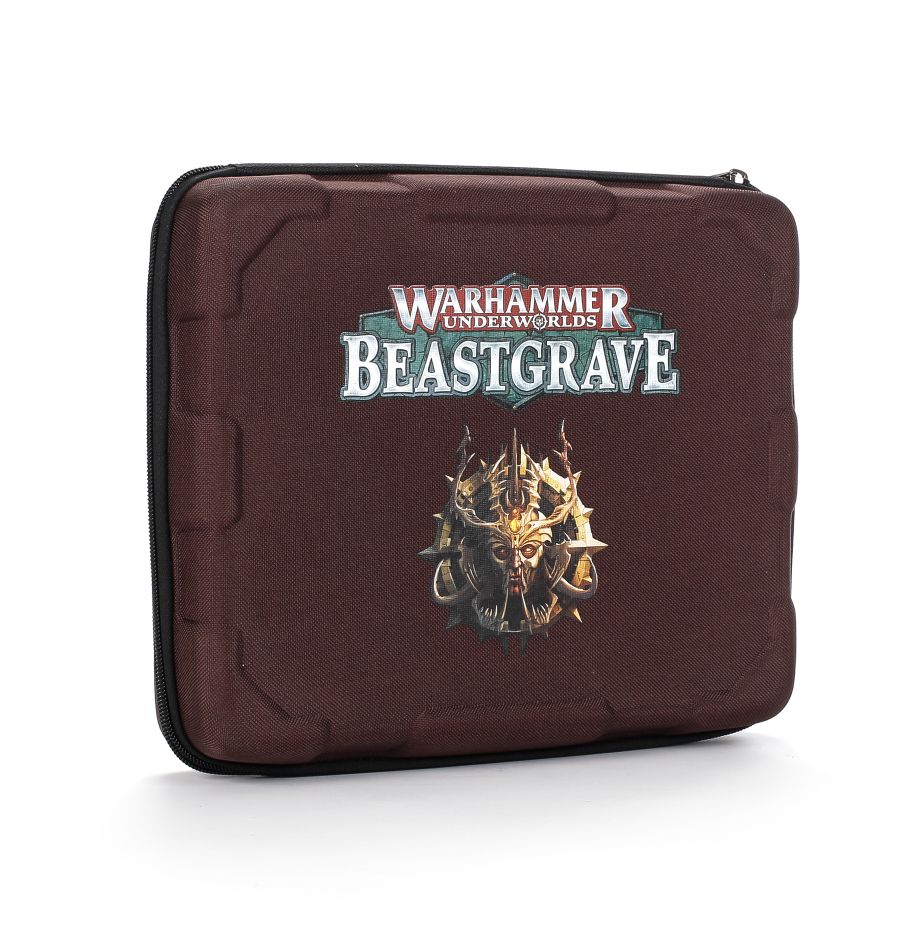 Get your deck, models and tokens to your next Grand Clash (or just a game at a friend’s house!) with the Beastgrave Carry Case. This highly portable case is compact, tough and designed to hold everything you need to play a game of Warhammer Underworlds – making it ideal for a gamer on-the-go.

The carry case features a single layer of bespoke-sized foam, with three rows of channel foam to secure your warband safely, protecting fighters from the smallest grot to Mollog the Mighty himself. Pre-cut slots, meanwhile, allow you to store your deck, dice and tokens, with space in the case for up to two of your boards. 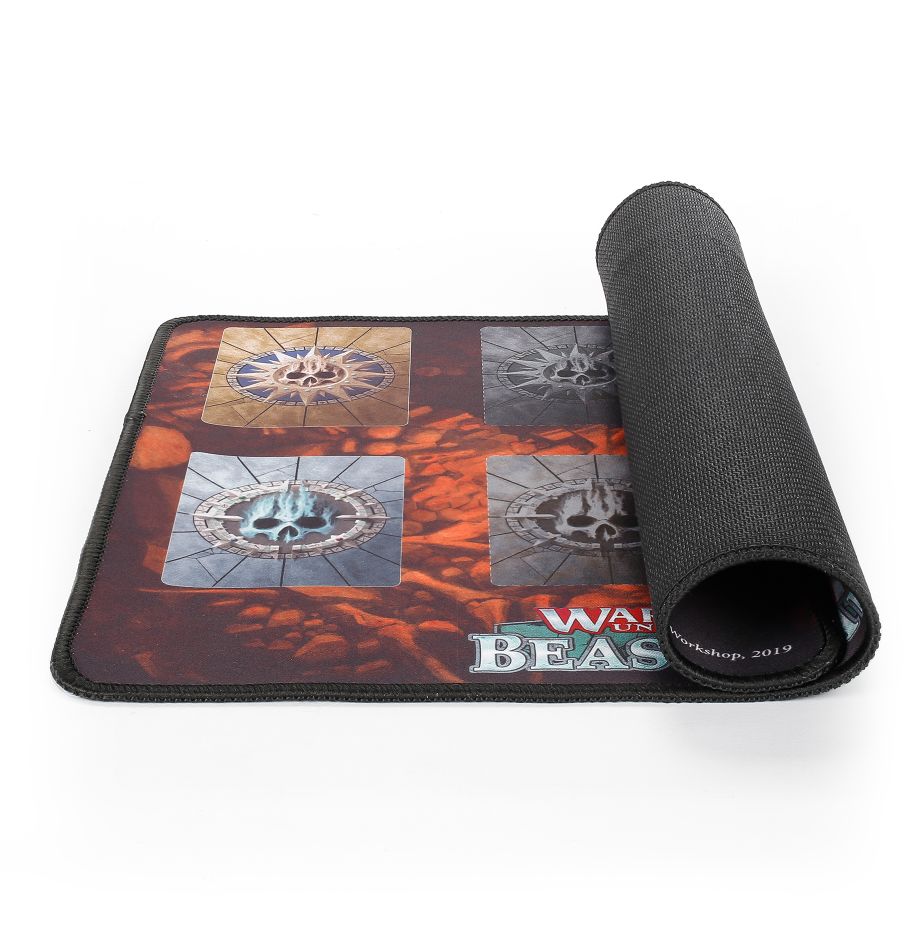 Keep your cards and tokens organised in your Warhammer Underworlds games with this playmat! Made from hard-wearing neoprene, and featuring stitched edges and an anti-slip base, it’s a durable, practical and an invaluable aid in your games.

Simply place your decks, discard piles and glory points in the appropriate spaces, and you’ll be able to keep track of your battles easily, while keeping your Warhammer Underworlds goodies safe. Designed specifically for gamers, it’s a must-have whether you’re gaming at home or slipping it into your bag for a tournament battle. 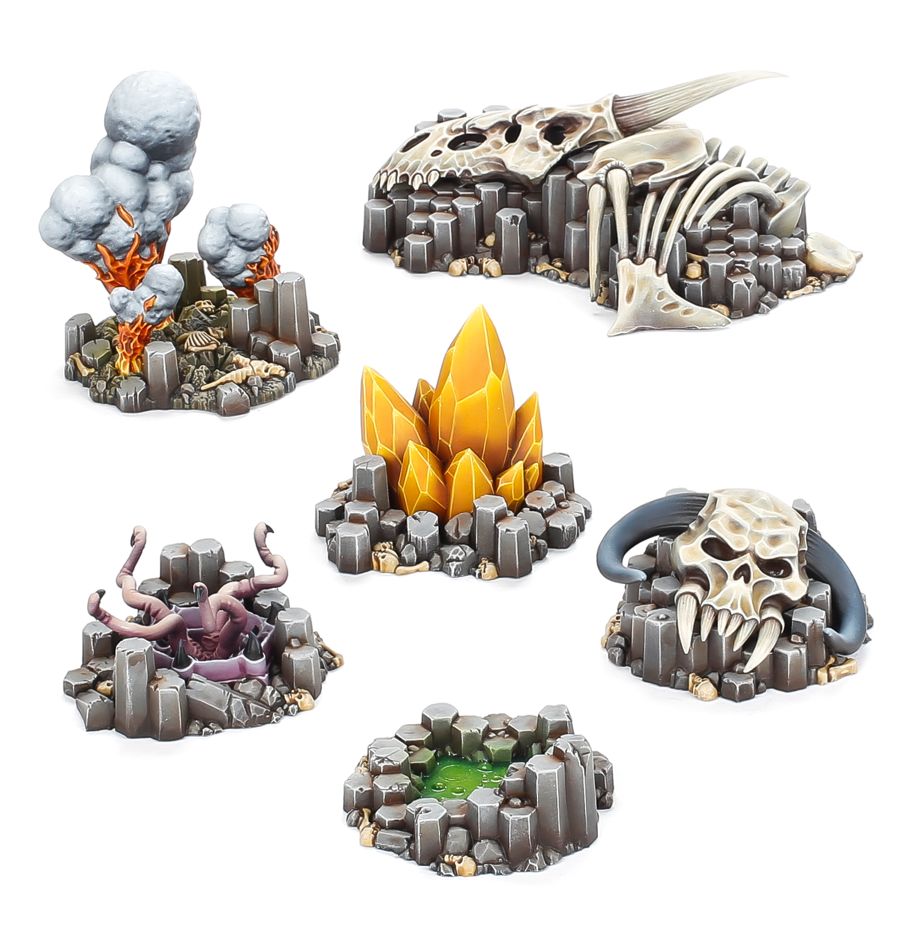 Bring the horrifying depths of Beastgrave to life with this set of scenery tiles! Designed to be combined with your gaming boards, these thematic scenery elements are perfect for representing blocked or lethal hexes in your battles. They’re also great for building terrain in your other Warhammer games, too. Perhaps you’ll combine several sets to make a battlefield based in Ghur for Warhammer Age of Sigmar, or an alien world in Warhammer 40,000.

This kit is supplied unbuilt in 20 plastic, push fit components. 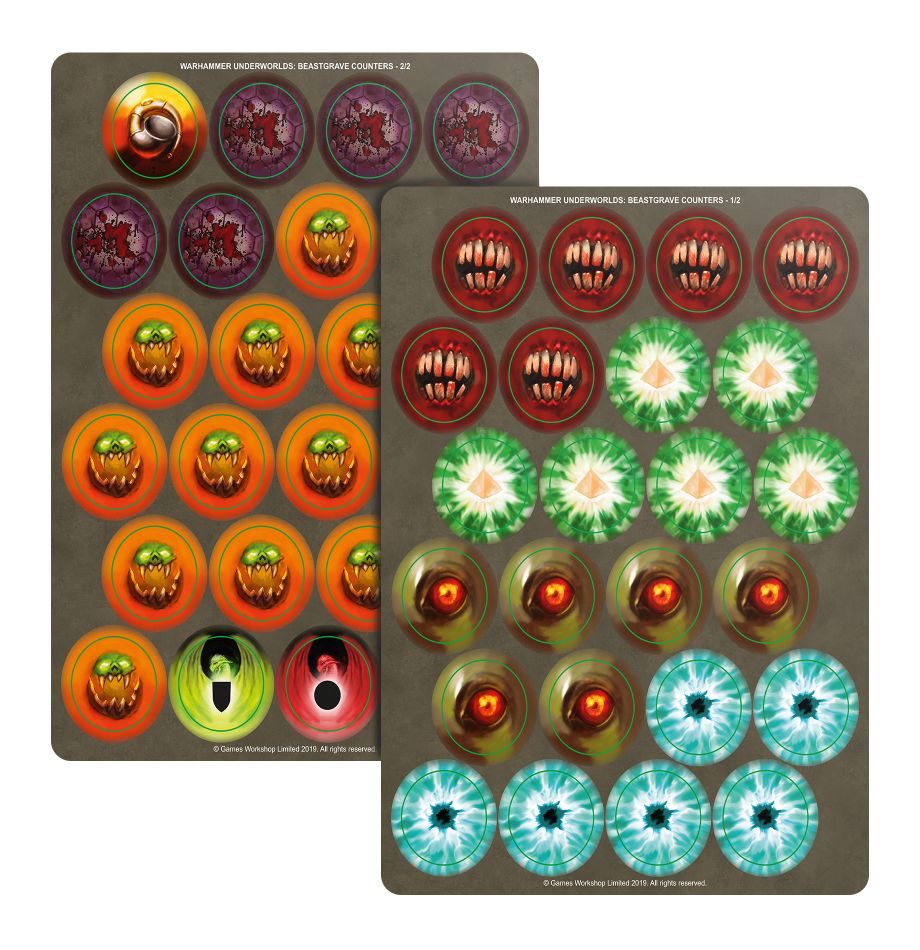 Need to keep track of something? Chances are, there’s a counter in this set for you. Inside, you’ll find two double-sided sheets of card counters, allowing you to keep an eye on anything from dark rituals to uncontrollable Waaagh! Energy.

These tokens are made of card, and feature art on the reverse. 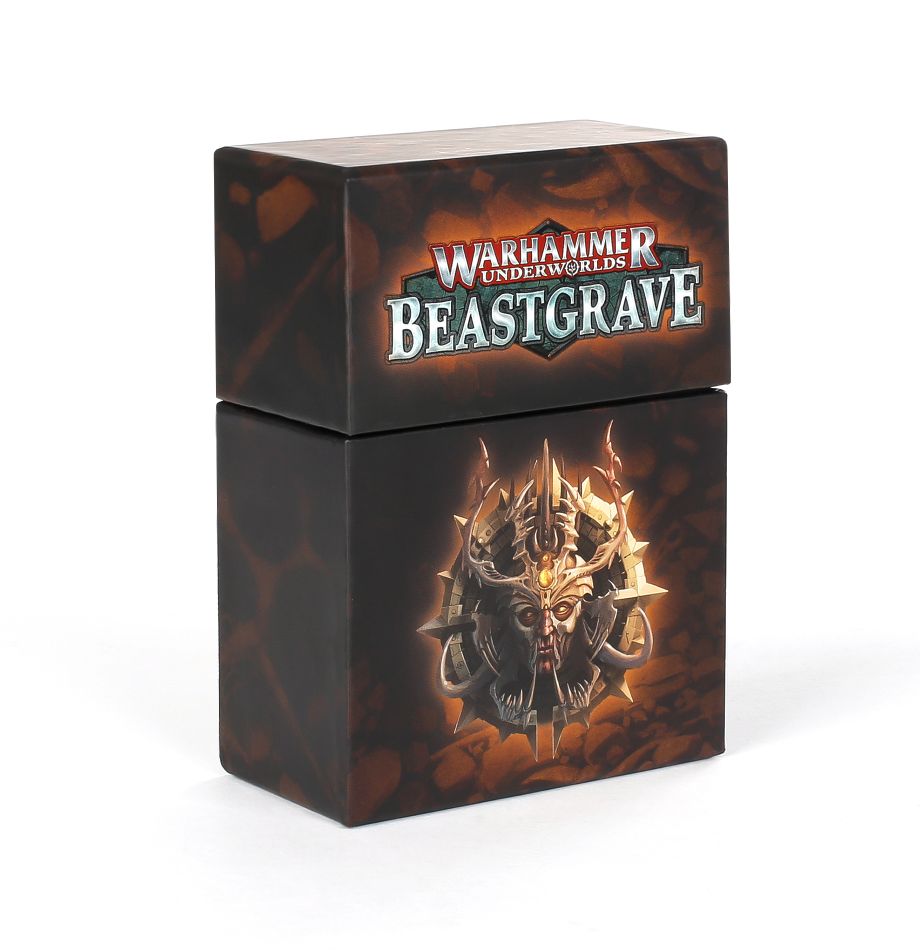 Keep your deck safe from anything Beastgrave (or your bag) can throw at it with this nifty deck box! Designed to store up to 75 unsleeved cards (or slightly fewer sleeved cards), it features rigid construction and a snug-fit lid that ensures that your next Grand Clash winner stays secure between battles.