Kill Team Arena, the competitive expansion to Kill Team is up for pre order today, and with it are a host of new kill teams and a kill zone! Don’t forget to order from Element Games to support our site! 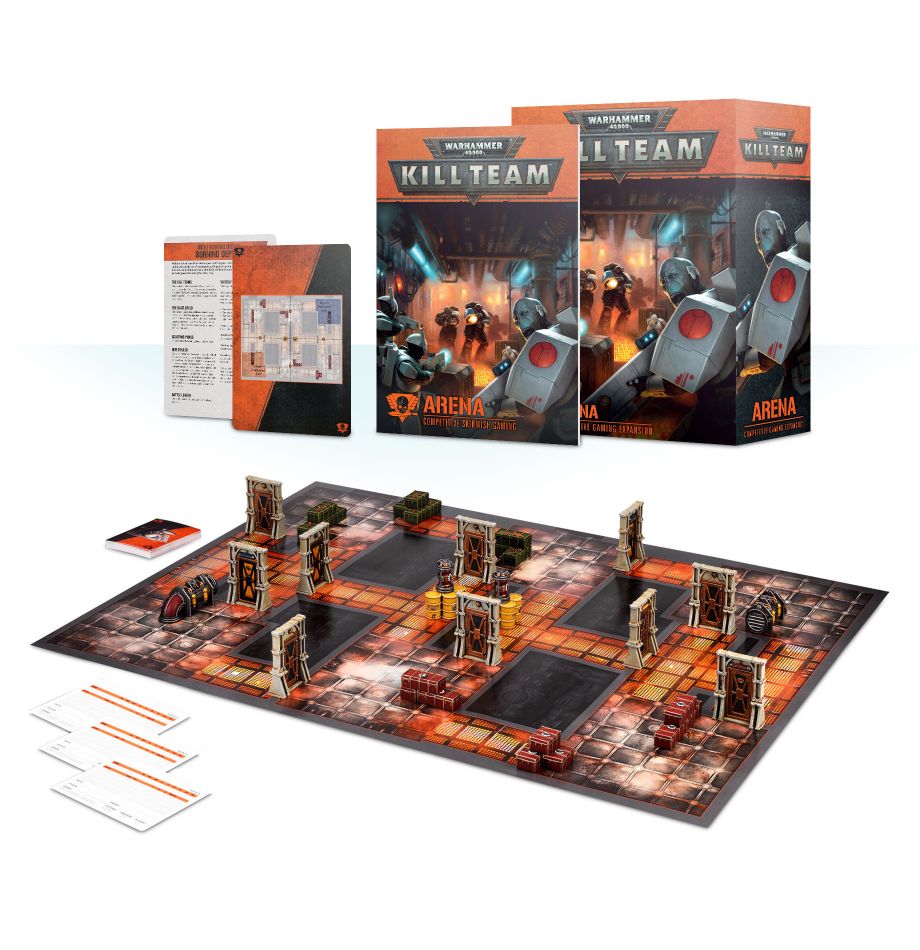 Kill Team: Arena is an expansion for Warhammer 40,000: Kill Team that introduces rules for competitive play, using evenly balanced terrain set-ups and mission objectives to offer each player an even playing field. Also included are missions and rules for running competitive Kill Team tournaments, either for single players or teams of two allies (known as Battle Brothers).

A 64-page softback book, Kill Team: Arena explains everything you need to know about playing competitive games of Kill Team, from one-off games to various formats of tournament play:

Competitive Play: This section includes competitive rules, terrain maps and missions intended for use in games where balance is paramount, such as those played in tournaments.

Battle Brothers: Introduces a cooperative format for playing team-based competitive play games of Kill Team, where each Battle Brothers team consists of two players whose kill teams are pitted against their opponents’ to see who can complete the most objectives. Includes 4 Battle Brothers missions and 28 Battle Brothers Tactics.

Kill Team Tournaments: Guidelines for running and participating in competitive play Kill Team tournaments, including how to register players and command rosters, determining player pairings in each round of a tournament, as well as how to score and rank players.

Using Competitive Play Missions in Campaigns: Guidance on how to use the missions from this set in your campaign games.

Along with the comprehensive book of rules, there is included a set of cards, tokens, scenery and gameboards for use with Arena:

– 28 Battle Brothers Tactics cards
– 12 mission cards, including Battle Brothers missions and 8 Competitive Play missions
– 2 sets of 12 Arena Objective cards (one for each player). Each deck is also supplied with a storage sleeve to ensure they are not mixed up.
– 2 x 22×30” double-sided, folding card gameboards
– 2 plastic frames of scenery, each containing the following: 5 doors, 4 barrels, 10 crates, 1 pipe, and 1 cylindrical container.

A copy of the Kill Team Core Manual is required to use this set. 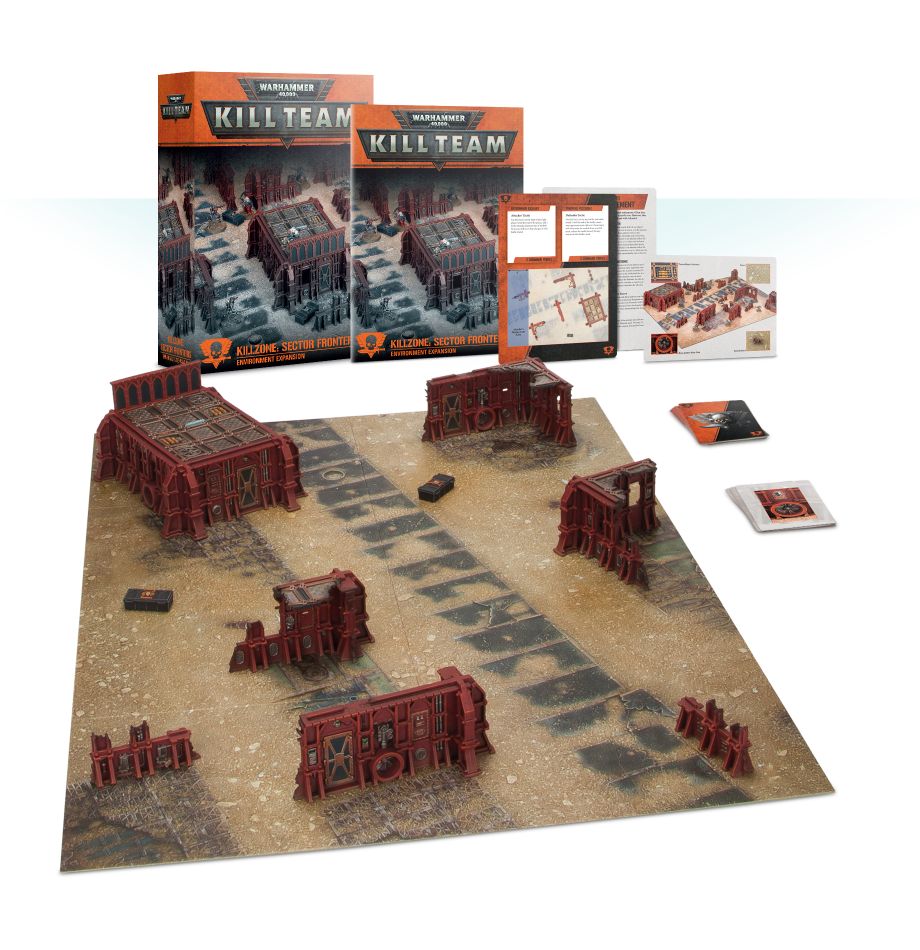 At the farthest reaches of space, the boundaries of the Imperium change almost daily as new worlds are discovered and settled and others fall to predations of aliens or rogue factions seeking freedom from of the crushing yoke of Imperial oppression. Open hostility is a common occurrence on such lawless worlds, yet with fewer resources to call upon, many such conflicts are resolved as guerrilla or shadow wars.

The Sector Fronteris Killzone Environment is an expansion for Kill Team – in the packed box, you’ll find a gameboard, scenery, and exclusive rules that use the unique nature of the Sector Fronteris terrain to introduce dangerous new missions and powerful effects to your games. Included:

– A double-sided Kill Team gameboard measuring 22” x 30”, printed on heavy, durable card stock. One side depicts a sand-blasted wilderness, while the other represents a more industrialised border region
– An 8-page booklet describing the sorts of wild frontier worlds that loosely make up the borders of Imperial territory, and where the influence of Terra is seldom felt.
– 12 Sector Fronteris Tactics cards – these can be used by any Kill Team Faction, with 4 cards providing interactions with the Sector Fronteris scenery and 5 being used specifically by Scout, Comms, Sniper or Medic Specialists
– A Sector Fronteris Environment card, which provides 6 different rules that interact with the scenery
– 4 Sector Fronteris Mission cards – designed to be used in conjunction with the gameboard and scenery, this is a set of 2 matched play missions and 2 narrative play missions, which are split between attacker and defender
– 4 Ryza-pattern Ruins plastic frames – including two brand sets of frames that include 2 slot-together walls, raised barricade, 3 armoured window covers, 1 large section of flooring, 3 small sections of ruined floor, and one connector that resembles a light. If you combine these 2 new frames, you can build a complete STC Ryza-Pattern building with a roof. There are also 2 plastic frames of STC Ryza-Pattern Ruins, each containing 3 slot-together walls, 3 ruined wall sections, and an Inquisitorial crate. 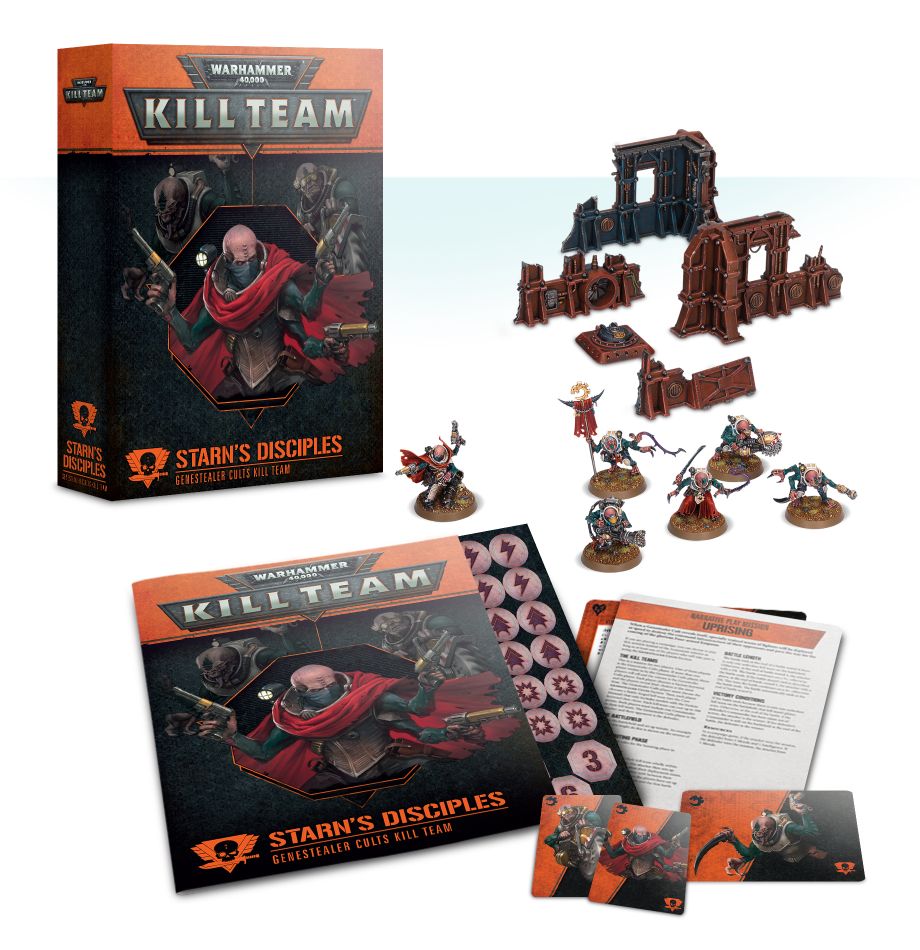 Ghyrson Starn is a hero of the xenos-tainted cultists who infest the war-torn world of Vigilus, a symbol of resistance against the tyrannical Imperium. To his enemies he is an anarchist and a cold-blooded killer, an assassin who steps from the shadows to slaughter his foes with blasts from his custom autostub pistols. He leads the kill team known as Starn’s Disciples, each of whom would gladly sacrifice their life for the gunslinging hero they idolise. This band of killers has murdered planetary governors, sabotaged Imperial monuments and stolen munitions from Astra Militarum outposts, building their infamous legend with every fresh outrage.

An expansion for Warhammer 40,000: Kill Team, this box includes 6 miniatures – one of which is an exclusive Commander, a Kelermorph – a scenery set, a background booklet, as well as brand-new Tactics and Mission cards. Included:

Also included in this box are rules for using all of these miniatures in your games of Warhammer 40,000. 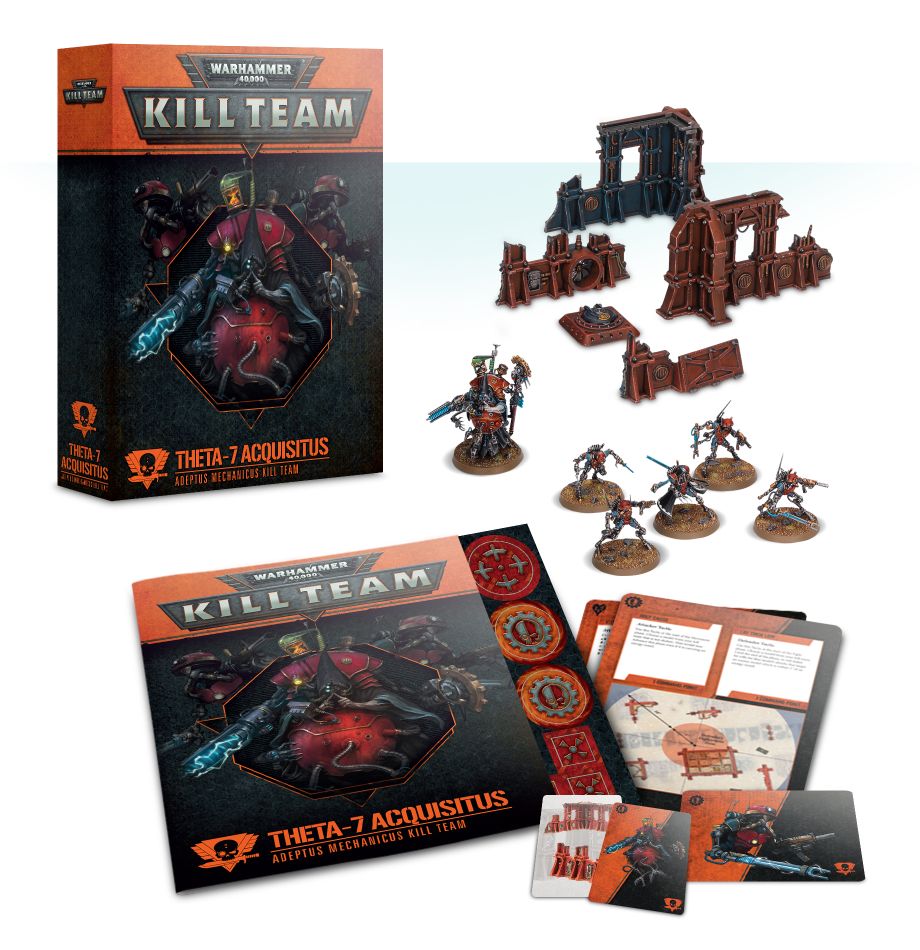 Each member of Theta-7 Acquisitus was hand-picked by Balphamus Vaulk for their combat expertise and rigorous stealth-engagement protocols. Together, they embark upon numerous secretive actions at the behest of their calculating master. Sometimes these missions are part of a sanctioned Imperial offensive, in which Theta-7 plays a small but decisive role, but often they kill only to further Vaulk’s own ends. Regardless of the nature of their task, the warriors of Theta-7 Acquisitus engage the enemy with furious fervour, eliminating their foes in the name of the Blessed Omnissiah.

An expansion for Warhammer 40,000: Kill Team, this box includes 6 miniatures – one of which is an exclusive Commander, the Tech-Priest Manipulus – a scenery set, a background booklet, as well as brand-new Tactics and Mission cards. Included:

Also included in this box are rules for using all of these miniatures in your games of Warhammer 40,000. 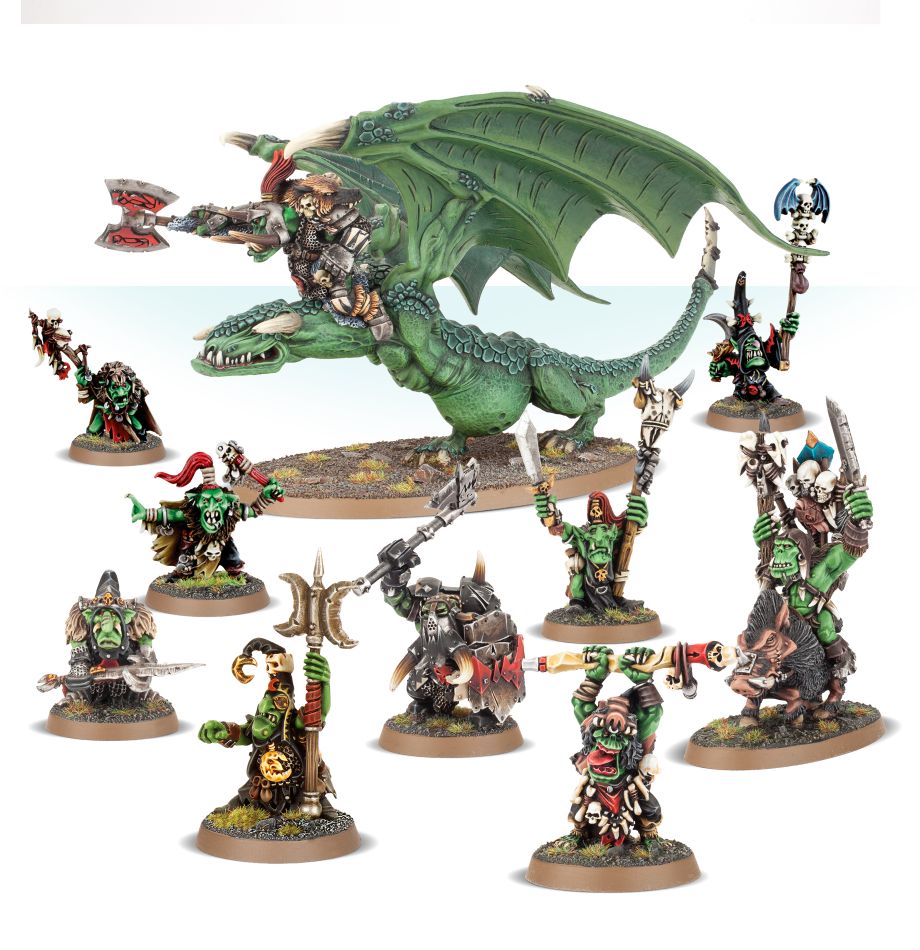 Games Workshop also have a range of classic Orc and Goblin models on made to order – but be quick, you only have a week to order them before they vanish away again!