Today’s pre orders are up on Games Workshop, and we have a load of stuff today! For Titanicus we have the Titandeath expansion and a brand new Reaver variant, for Middle Earth we have the Gondor at War sourcebook and the Three Hunters and for Warhammer Underworlds we have two new warbands: Mollog’s Mog and the Godsworn Hunt!

Don’t forget you can support the site by ordering through Element Games! 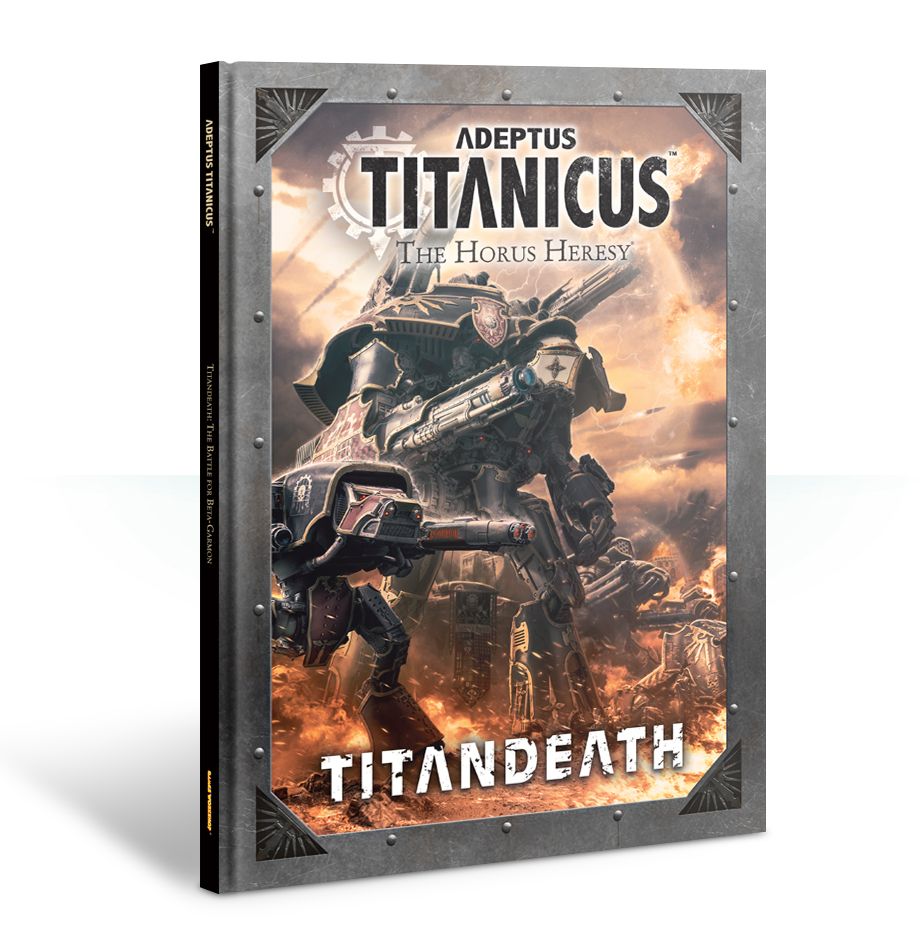 Of all the immense engine-wars that raged in the Horus Heresy, none was greater, or more devastating, than the battle of Beta-Garmon. In that star system, the last Imperial fortress world before the traitor fleets reached Terra, entire Titan Legions and Knight Households clashed for supremacy in battles that rendered worlds uninhabitable and ended legacies of honour that stretched back millennia. It was not for nothing that the battle became known to history as the Titandeath…

This Adeptus Titanicus: The Horus Heresy expansion introduces the background of the Beta-Garmon campaign. It also provides a wealth of new rules and missions to use in your campaigns, including new maniples, Legion rules and a complete campaign system based on the events at Beta-Garmon.

– An overview of the war for Beta-Garmon
– Background and Legion-specific rules for 8 Titan Legions: Astorum, Defensor, Atarus, Solaria, Mortis, Krytos, Fureans, and Vulpa
– Full colour examples of Titans from each Legion
– Four new maniples: Corsair, Janissary, Regia and Lupercal
– Six narrative missions based on the greatest battles of Beta-Garmon
– Rules for organising an Adeptus Titanicus campaign
– Guidelines for map campaigns and terrain types
– How to build and maintain a Titan battlegroup across multiple games
– Rules for hostile battlefields based on conditions in Beta-Garmon
– A list of Knight Houses that fought in the Titandeath 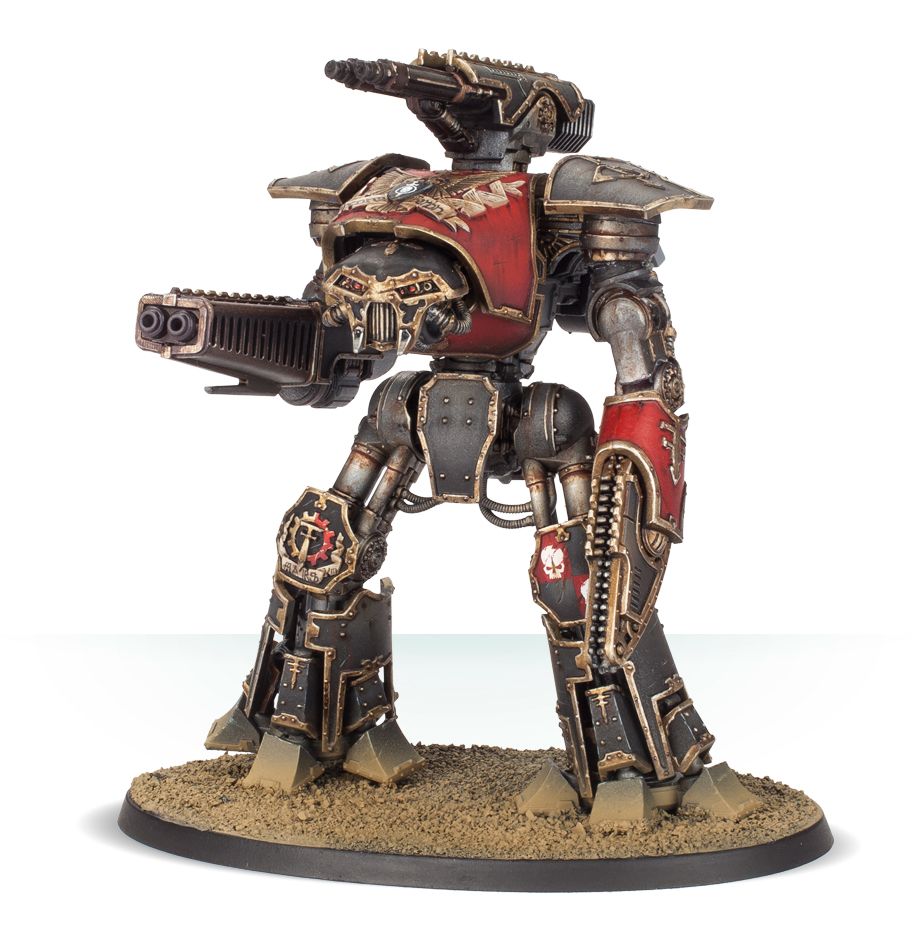 A gargantuan war machine, the Reaver Titan is one of the most common and destructive classes of Battle Titan. Armed with devastating weapons and able to crush enemies under its tread by the score, the ground shakes as the Reaver advances and the enemy is left with a choice: flee or die. Reavers are the heart of the Titan Legions, holding the line or leading the charge as their Princeps demand.

The Reaver Titan forms the mainstay of most Titan Legions, and is a key component of many Adeptus Titanicus maniples. Swifter than its Warlord cousins and more durable than the smaller Warhounds, with a wide range of devastating weaponry, the Reaver Titan is the perfect addition to any battlegroup.

This multipart plastic kit contains the components necessary to assemble a Reaver Battle Titan for use in games of Adeptus Titanicus. Particularly aggressive-looking, even compared to its contemporaries, this highly-detailed Titan is easily recognised by its flattened face profile and angular carapace.

It comes armed with several weapon options – a melta cannon and volcano cannon are available, alongside a chainfist. Above the carapace – of which 2 are included, 1 blank – resides a turbo laser destructor, either side of which are the shoulder pads (3 sets are included – 1 set loyalist, 1 set traitor and 1 set blank). Further modelling options include the knee pads – 2 of these are blank, with 1 depicting the symbol of the Opus Titanicus.

This kit is supplied with a Citadel 105x70mm Oval base along with a decal sheet – this features heraldry for the following Legions: Gryphonicus, Fureans, Astorium, Atarus, and Mortis. 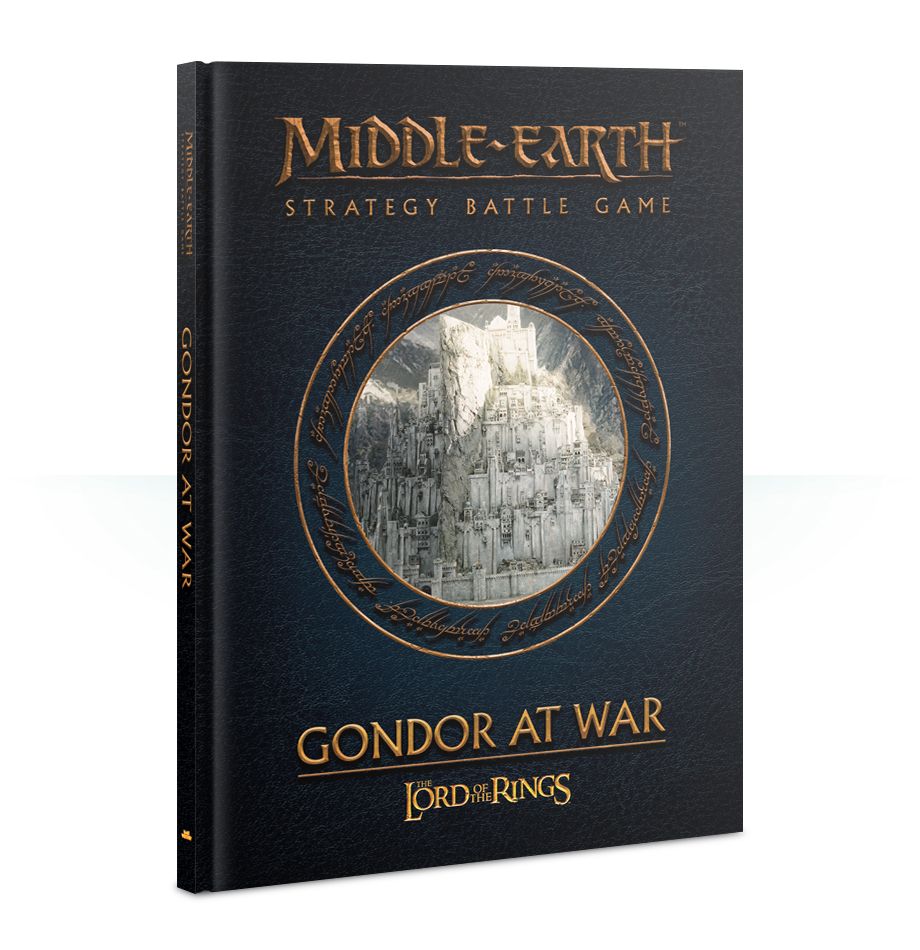 At the end of the Third Age, Gondor was the greatest remaining land of Men, the last bulwark of might standing against the growing darkness of Mordor. As Sauron’s armies were unleashed and the War of the Ring began, it was Gondor that stood against the might of the Orcish hordes and their dark allies. And it was before the gates of the White City, on the Pelennor Fields, that the tides of war would turn, as the rightful king returned and heroes rose and fell…

This expansion for the Middle-earth Strategy Battle Game focuses on the the events of the Dark Lord Sauron’s assault on the kingdom of Gondor during the War of the Ring. It features background on Gondor and the White City of Minas Tirith, along with a wealth of new rules, scenarios, profiles and a campaign that allows you to refight some of the greatest battles of the Third Age with your collection of Citadel and Forge World miniatures.

Inside this 128-page hardback book, you will find:

– History of Gondor: A guide to the realm, from its founding by Elendil to the Third Age and the coming of King Elessar
– Scenarios: 29 narrative play scenarios ranging in size from small skirmishes to mighty clashes let you refight your favourite battles from the books and films, from the fall of Osgiliath to the Battle of the Black Gate.
– Gondor at War Campaign: Link the scenarios together into a flowing campaign, with each battle having an impact on others.
– Armies: Background, tactics and army lists for Minas Tirith, Rohan, The Fiefdoms, The Dead of Dunharrow, Mordor, The Serpent Horde, Far Harad and the Corsairs of Umbar. Includes new profiles for a range of Heroes.
– Legendary Legions: 8 stand-alone army lists representing the forces that fought in famous battles of the War of the Ring: Rangers of Ithilien, The Grey Company, The Return of the King™, The Riders of Théoden, The Men of the West, The Army of Gothmog, Grand Army of the South, and The Black Gate Opens
– Miniatures showcase: A selection of Citadel and Forge World models for each of the armies in this book. 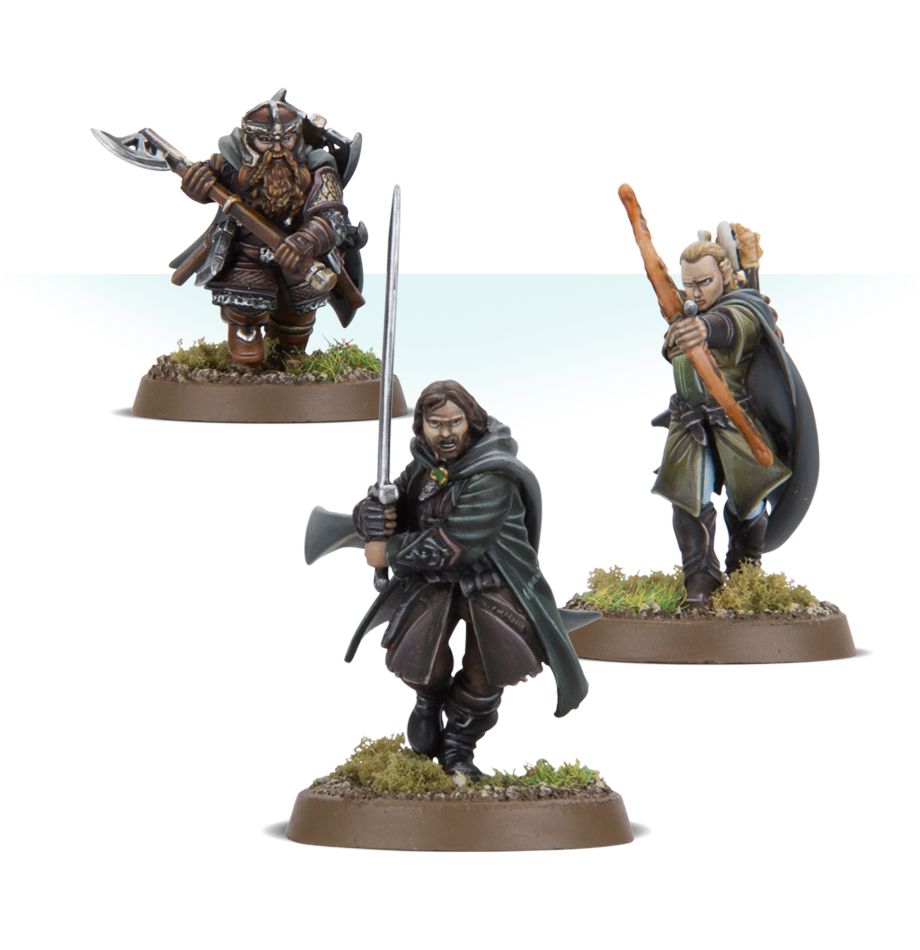 When the Fellowship of the Ring was broken at Amon Hen, Aragorn, Legolas and Gimli chose to pursue the Uruk-hai who had abducted the Hobbits Merry and Pippin. These Three Hunters tracked the enemy to Rohan, where they fought alongside King Théoden at Helm’s Deep, before turning to ancient paths in search of allies – and Aragorn’s destiny.

During the Battle of Pelennor Fields, they arrived at the Docks of Harlond when things seemed darkest for the White City, leading the Army of the Dead – and with them came victory for the Men of the West.

This plastic kit builds three Citadel miniatures representing Aragorn, Legolas and Gimli, the Three Hunters, as they appeared at the docks of Harlond in The Lord of the Rings: The Return of the King™.

The Three Hunters are a great addition to any Good army, providing hard-hitting power both up close and at range. Aragorn’s inexhaustible Might resource and sword Andúril make him a potent asset, while Legolas’ unerring accuracy with his bow and Gimli’s wide range of attacks are tremendous support. Together, the three can take on many times their number in enemies.

Also included in the set is a plastic priority marker. One side features an icon representing the Three Hunters, featuring each of their weapons. On the other side is the Eye of Sauron. This can be used to mark who has priority in each game turn.

This multipart plastic kit comes in 27 components to build three miniatures plus a priority marker. It also includes 3 25mm round bases.

Aragorn is armed with the sword Andúril, Flame of the West. He is running forward ready to strike, and wears an Elven cloak over his Ranger garb.

Legolas is striding forward firing his Elven bow with unerring accuracy. He wears an Elven cloak over his forest-hued clothing.

Gimli is marching menacingly towards the foe, a double-handed axe ready to cleave some Orc heads. In addition, his iconic two-headed axe is stowed on his back and he carries a brace of throwing axes. He wears an Elven cloak in addition to his layers of armour. 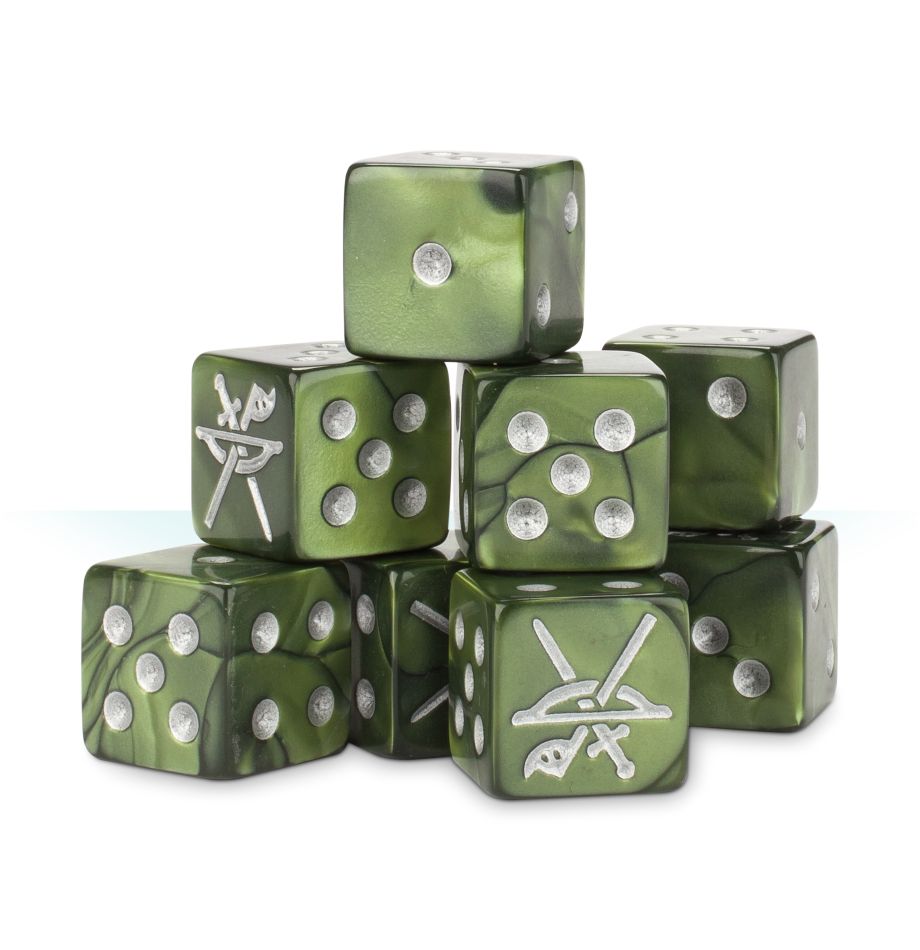 This set contains eight six-sided dice for use during your games of the Middle-earth™ Strategy Battle Game. Themed to tie in with the Three Hunters, these dice are coloured a pearlescent green with silver markings, and a symbol of the Three Hunters – Aragorn’s sword, Gimli’s axe and Legolas’ bow – is picked out in place of the 6.

The eight dice in this set come packaged in clear plastic container with a gold lid, featuring debossed script like that on the One Ring. 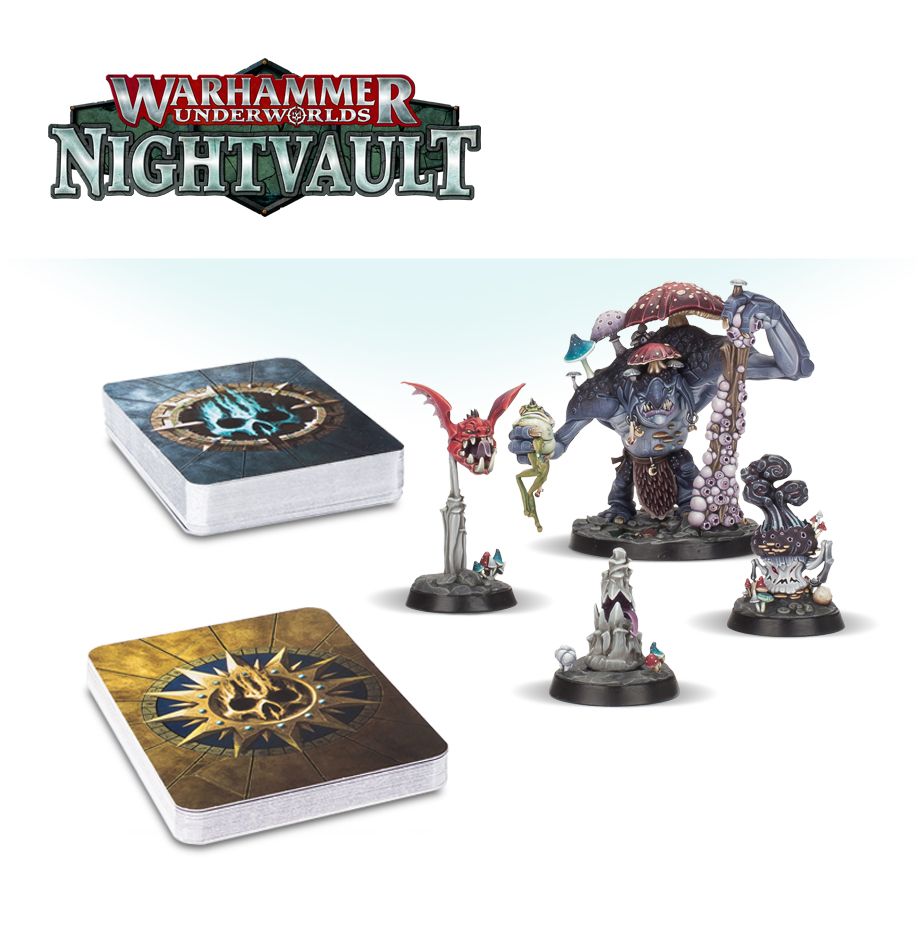 The Mirrored City is full of conquerors, despoilers and seekers of arcane knowledge, but Mollog – an ancient Dankhold Troggoth – just wants a nap! Stirred from a long slumber, he now seeks a bit of peace and quiet, and is more than happy to crack the skulls of anyone who’d deny it to him.

Mollog’s Mob is a Warhammer Underworlds warband like no other, focused around a single, brutally powerful fighter (and his squiggy mates). You’ll sweep through unprepared warbands with ease, using a host of nasty critters to support your rampage. Inside this set, you’ll find four push fit models that let you build Mollog’s Mob, plus fighter cards for keeping track of their rules in battle.

This set also features 60 unique cards, available only in this set. You’ll be able to harness the full might of Mollog’s Mob with 29 warband-specific cards, or upgrade your decks for any warband with 31 universal cards – including objectives, ploys and upgrades – that anyone can use.

Once you’ve conquered the Mirrored City, you can move on to the Mortal Realms and use Mollog as a Hero in your Gloomspite Gitz army with a free warscroll – find it in the Downloads tab. 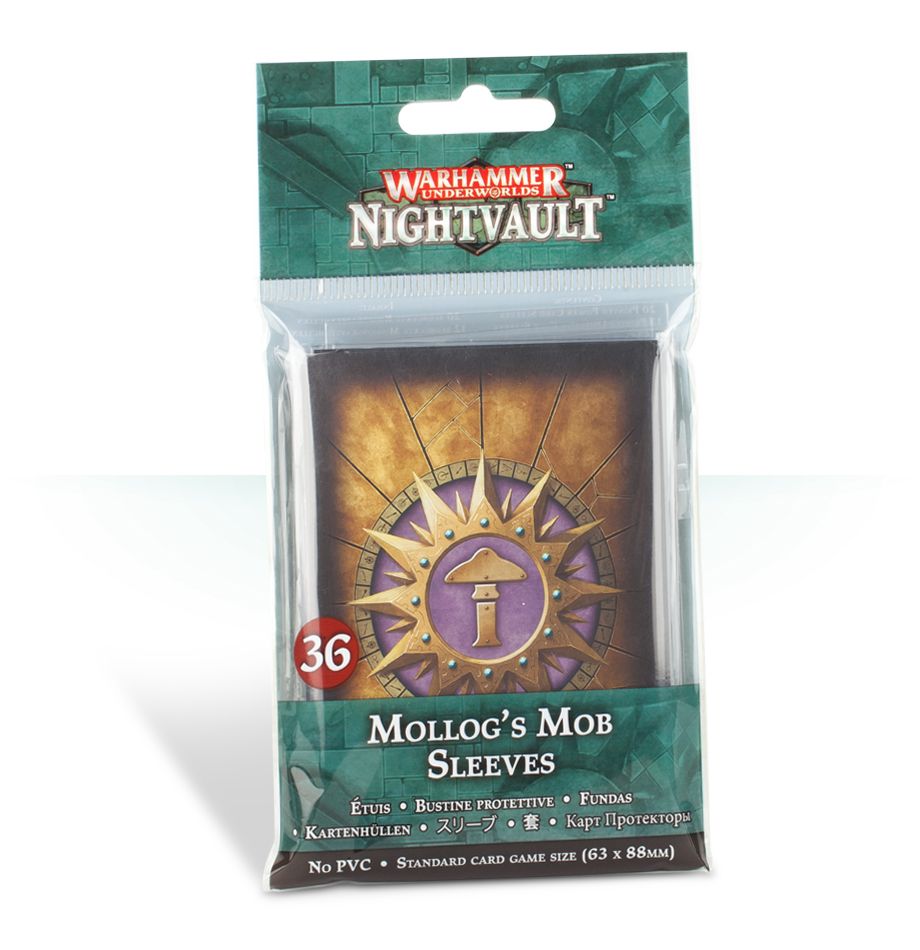 Keeping your cards safe from rampaging troggoths, ectoplasmic spills and just the usual wear and tear of play, these sleeves are perfect for the Warhammer Underworlds player looking to keep their deck in fighting shape. These sleeves are hard wearing and designed to allow for smooth shuffling of your deck, making them ideal for transporting your cards to your next games night. These sleeves have been designed to match Mollog’s Mob and feature unique iconography, making them perfect for anyone who plays this warband. 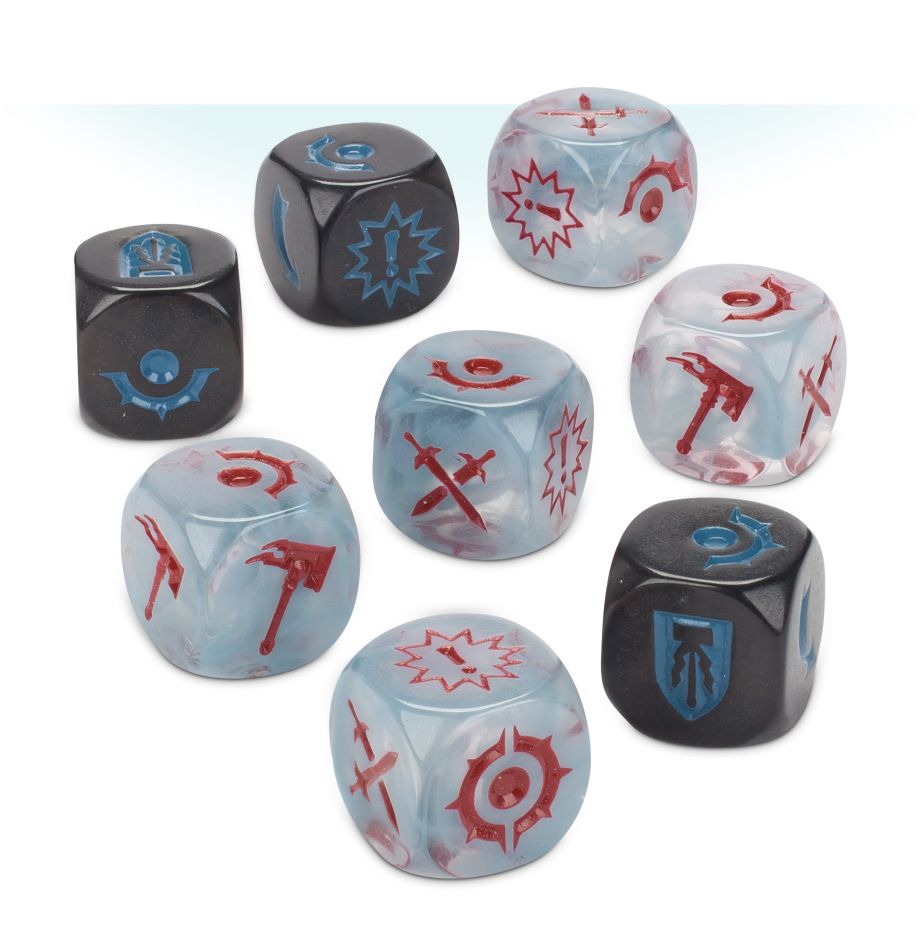 Match your dice to your warband with this set, customised to match Mollog’s Mob. With five attack dice, and three defence dice, you’ll have enough for even the most grievous assaults or desperate defences. While we can’t guarantee they’ll roll more critical successes, they do look awesome! 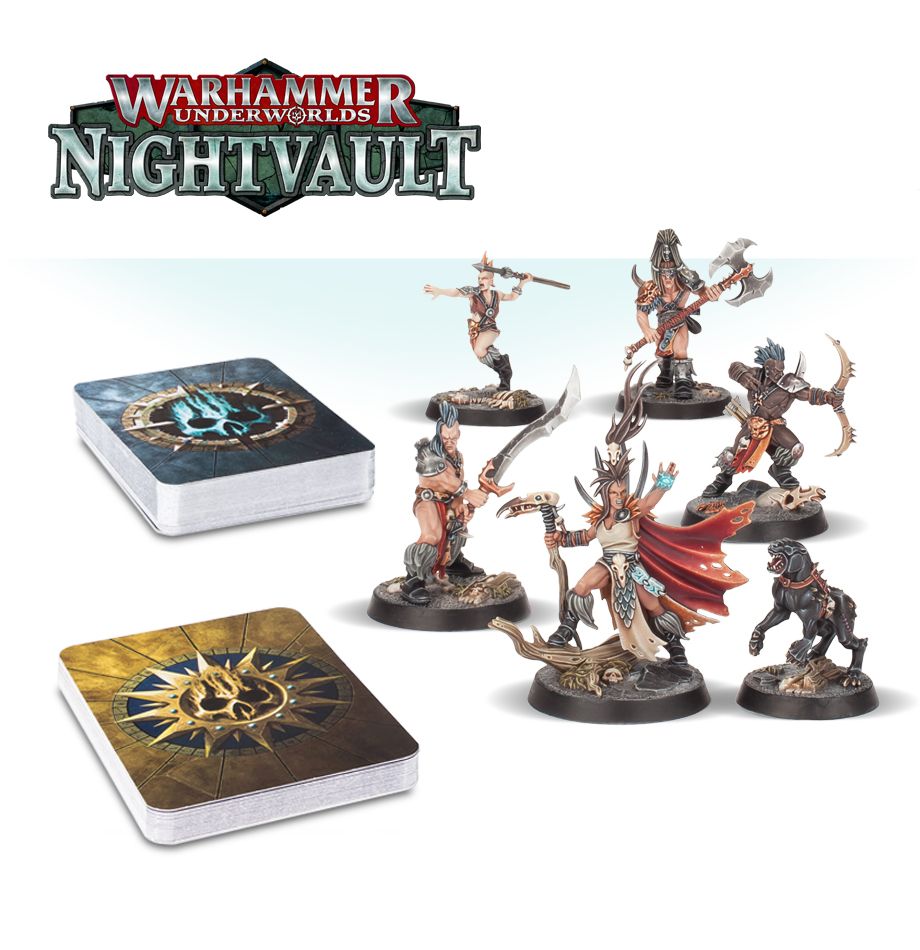 Theddra Skull-scryer, war shaman of the Tribe of the Black Fang, leads a Godsworn Hunt into the depths of the Mirrored City, seeking worthy sacrifices to pledge to the Chaos pantheon.

The Godsworn Hunt bring the ferocity, speed and ruthlessness of the Darkoath to the ultimate competitive miniatures game. A flexible warband capable of playing aggressively or holding objectives, they’re perfect if you’re looking to win with cunning, speed and sheer brutality. Inside this set, you’ll find 6 all-new push fit models, representing each of the Godsworn Hunt, plus Fighter cards to keep track of their rules.

This set also features 60 unique cards only available in this set for building your Warhammer Underworlds decks. Harness the dark abilities of the Godsworn Hunt with a set of warband-specific objectives, upgrades, ploys and spells, or enhance any warband with 31 powerful universal cards that anyone can use.

What’s more, you can use the Godsworn Hunt in your games of Warhammer Age of Sigmar with your Slaves to Darkness army thanks to a free warscroll – find it in the Downloads tab. 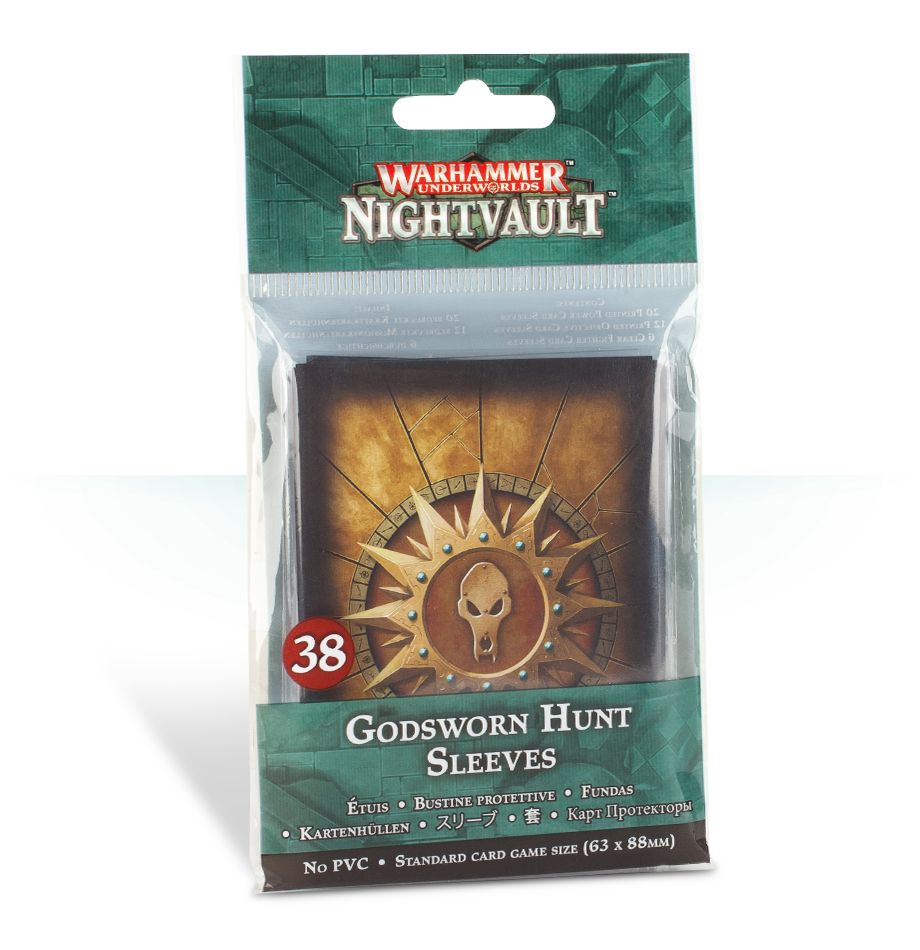 Protect your deck from the Dark Gods’ most strenuous trials with these card sleeves! This pack contains enough sleeves to armour a full deck and your fighter cards, keeping them safe from wear and tear as well as errant spills while allowing for smooth shuffling. These sleeves feature unique iconography tying them to the Godsworn Hunt, making them perfect for fans of this warband. 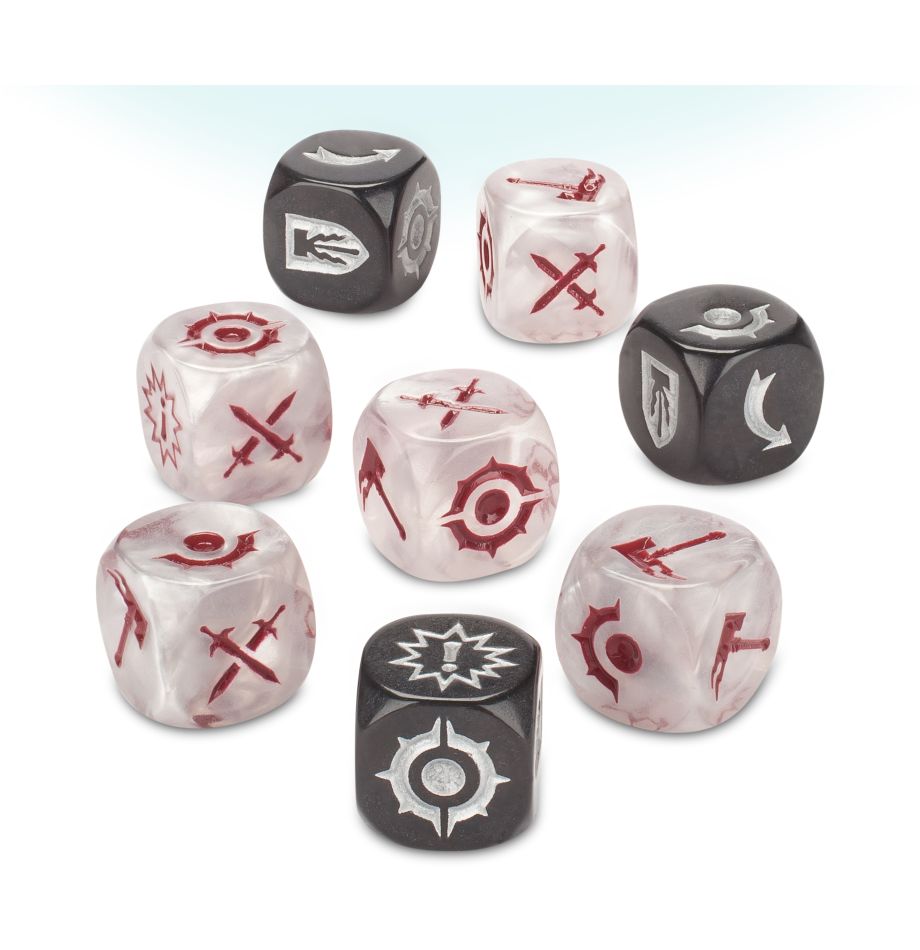 Designed to match the Godsworn Hunt, these dice are ideal for any Warhammer Underworlds fan who plays the Darkoath. This set contains five attack dice and three defence dice in a unique colour scheme and is the perfect accompaniment to your warband.