In just a couple of days Games Workshop are doing another one of their awesome previews, this time focusing on Warhammer 40,000!

There’s lots of speculation on what might be coming in this preview seminar, so we thought we would share what we each want to see revealed at the event, starting with Matt! We have no idea what is on the horizon, so expect a mix of everything from the possible to the outright bananas!

Well, if we are wishlisting then we may as well start with the big one! Or do I mean little one? Squats! You love them, I love them, we all want to see some more high-tech space dwarfs in our games of Warhammer 40k! Originally being killed off back in 2nd edition, many old time fans of the game have longed to see this little fellas brought back into the fold. The concept of 40k biker dwarves might seem a little silly, but look how cool that Necromunda Sqaut above is!! Yes, from a game point of view they would either slightly tougher Imperial Guard (Or perhaps slightly shorter Tau), but we all know we would but the inevitable Squat Army Set (With included limited edition Squat codex of course!)

We got plastic Sisters of Battle, and we even for a model for The Lion – so the next thing in the holy trinity of much wanted models absolutely has to be the Thunderhawk Gunship – or perhaps a new Primaris take on it? An awesome plastic superheavy is something that would be much welcomed in the Adeptus Astartes line, so is it too unlikely that we might one day get something like a Thunderhawk? Now, I’m sure that the kit is possible, but the arguement has always been “Would you rather a plastic Thunderhawk, or use that sprue allowence for an entirely new army”. I would agree that I’d rather see something new, but a plastic Thunderhawk would end up on a lot of people’s Christmas list I’m sure!

This one is a lot more likely than other things we have seen on this list. We have already seen the teaser trailer for what seems to be The Silent King(Which coincidentally coincides with the date of the 40k preview) so I think it is a given we will see something Necron shown off on Saturday.

The question is, what will it be? An awesome new model for The Silent King is a possibility, perhaps on that awesome looking vehicle in the above trailer.

We also see some rather hench looking Necrons in this trailer too – could these maybe be a new take on Pariahs? The Flayed Ones and Heavy Destroyers are also very old kits that could be updated into plastic, each with maybe an alternate build in order to give the Necrons more options.

Finally, maybe we will see a new Necron Warrior kit (Perhaps again with optional Flayed One parts) – this is a very old kit, and Games Workshop have moved away from the green plastic rods in the newer parts of the Necron line. I’d like to see something a bit chunkier, like a more menacing version of the original metal Necrons from years ago! 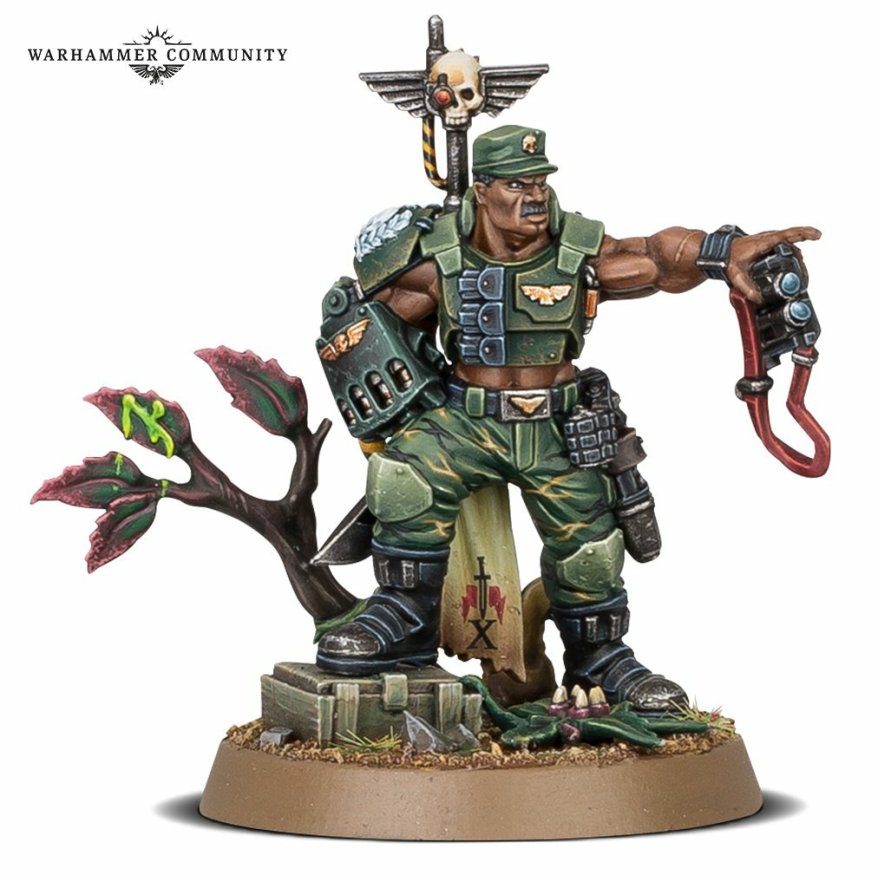 We have had 2 awesome Catachan themed exclusive models, so is it a possibility that we might see a new Catachan range? A lot of the exclusive models we have seen lately have been based around forces in starter boxes, so could this be a hint that if we do get a new Warhammer 40k starter set that it might have Catachans in it?

The Catachan Command Squad is an absolutely gorgeous set compared to the very old Jungle Fighters box, and I would love to see these redone to bring them in line with Dutch and Dillon… sorry I mean Sly Marbo and the Catachan Colonel.

It would also make it a great time to release some new plastic jungle scenery in order to mix up our gaming tables!

I think this is what most people are expecting from Saturday. Would it be a massive departure from the current game? Probably not. I would expect to see something more in line with what we saw from the first edition of Age of Sigmar to the Soul Wars set, smoothing over the rough edges and giving it a new lick of paint.

I can’t see Games Workshop wanting to invalidate every current Codex, as that would generate a lot of bad will – what we are more likely to see are replacements to the old Indexes. In fact, we have already in a previous preview been told that a new line of books will be coming from Forge World in order to let you play with your Forge World units in Warhammer 40k. Death Korps of Krieg, Talons of the Emperor and the Mechanicus are all good shouts for factions that may get books in this upcoming line, and I would imagine Games Workshop would want these to come out alongside a new edition of the game in order to help the community start new armies.

If a new edition of the game is on the way, then I would also expect a new starter set, perhaps featuring some of the factions we have already mentioned. I find it interesting that the Pariah trailer features Necrons VS a combined Inquisition, Space Marine and Sisters of Battle force – this could perhaps be a hint of what we might see!

Finally, there’s that image from ages ago…

Yes, it’s super blury, but it does seem to show Primaris Bikes and a new Land Speeder looking thing (And is that a new variant of tank below it?) As someone toying with a White Scars army, this is absolutely something I hope we see in more detail on Saturday!

So what do you think we will see revealed? Let us know over on Twitter!