We have a massive pre order on the way today with the awesome new Feast of Bones battle box and the Ogor and Ossiarch Bonereapers battletomes! There’s also goodies for Adeptus Titanicus, Aeronautica Imperialis and the Middle Earth Strategy Battle Game

To help support the site please order from Element Games! 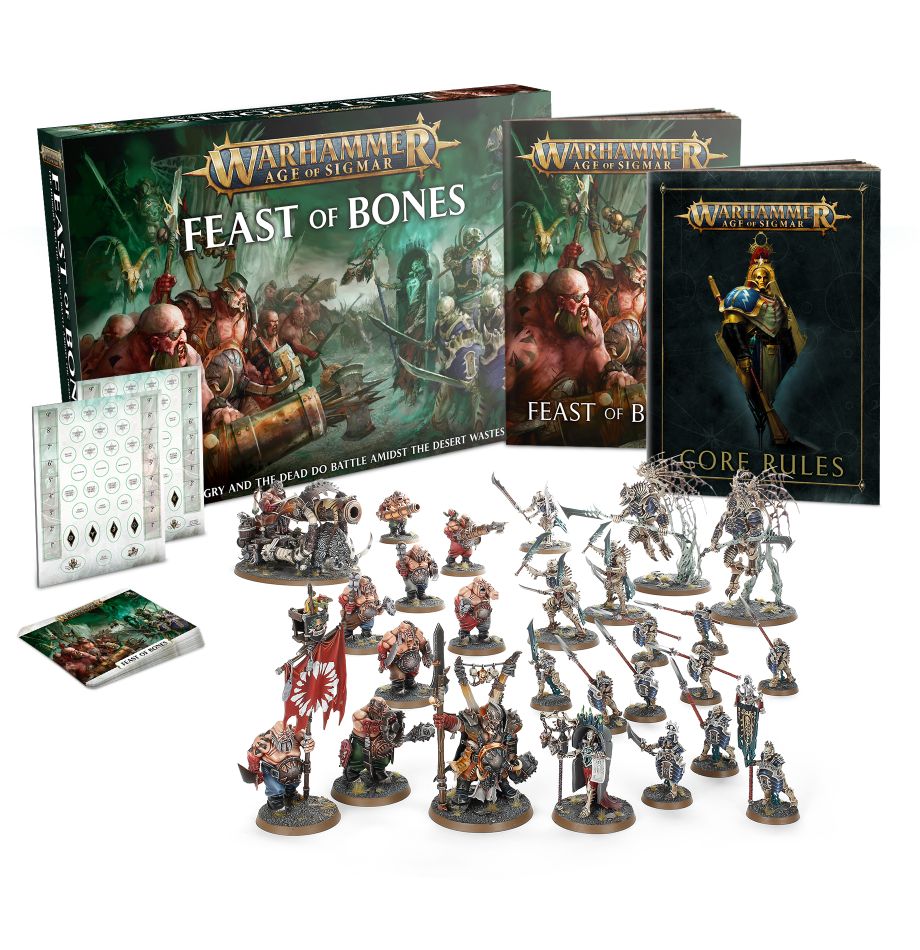 The Pact of Bones is broken – and the Feast of Bones has begun!

Embark on some of the most brutal combat the Mortal Realms has ever seen in Feast of Bones – a battlebox that pits the ravenous Ogor Mawtribes against the relentless Ossiarch Bonereapers. In this set, you’ll find almost everything you need to build and battle with two armies, with models, rules, lore and accessories that make gaming out of the box simple. Whether you’re looking to kick off an Ogor Mawtribes or Ossiarch Bonereapers collection, or just want hours of awesome gaming with a friend, this is the set for you!

– The 40-page Feast of Bones book
Discover the story and armies of Feast of Bones with lore, art and rules that explore both forces and the reasons for their conflicts, including warscrolls and two warscroll battalions that let you game with the models right out of the box.

– A Double-Sided Token Sheet
Perfect for tracking ongoing effects in your battle like spells, command points and more. 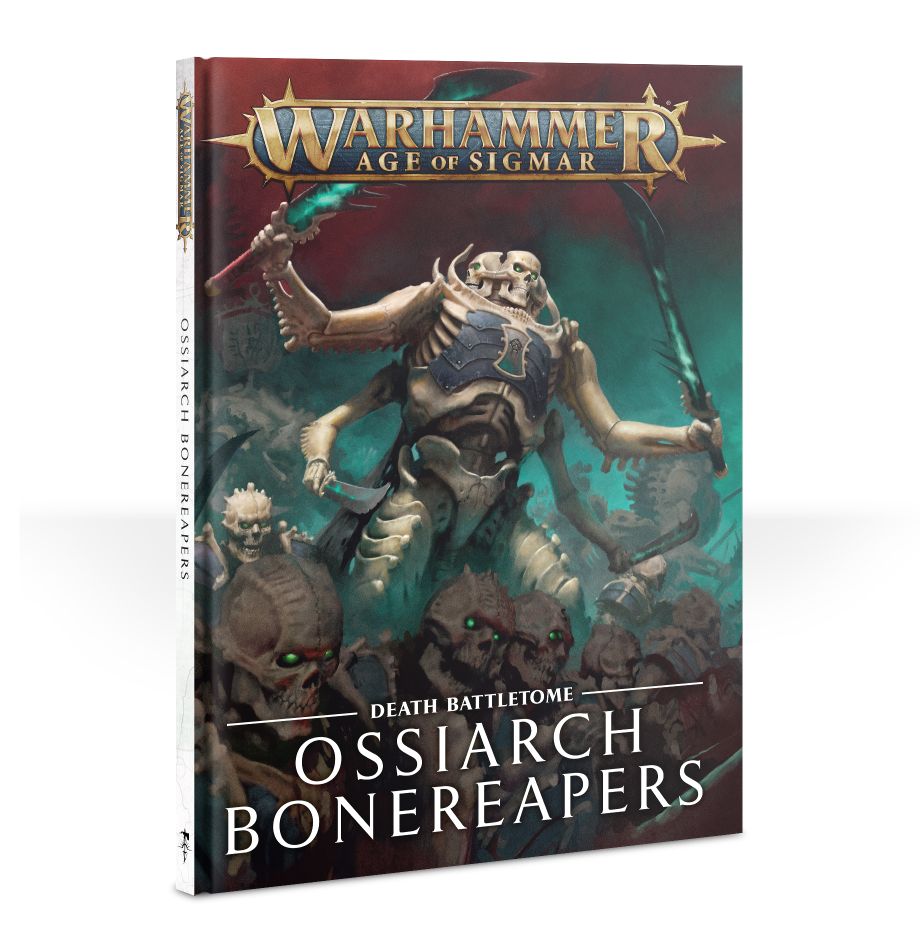 The Ossiarch Bonereapers come forth in macabre splendour, for they are Nagash’s will given form. All that they kill becomes theirs, body and soul. This is a military force like no other, organised and efficient, led by generals created by the supreme lord of the undead and lent a measure of his necromantic power.

Inside this 120-page book you’ll find overview of the Ossiarch Bonereapers – Nagash’s elite undead army. A huge selection of rules gives you countless ways to play with your Bonereapers collection. Allegiance abilities reward you for fielding dedicated forces of Ossiarch Bonereapers, while rules for several legendary legions allow you to tailor your army to suit your playstyle. Warscroll battalions reward you for fielding specific combinations of models, while Path to Glory warband creation rules and bespoke Ossiarch Bonereapers missions are perfect for your first few games. This battletome is also a great resource for collectors, featuring tips for painting details like bone, armour and magical runes, as well as a showcase of beautifully painted Citadel miniatures to inspire your own collection.

– Lore and art that explores the Ossiarch Bonereapers, their demands of tithes of bone and the strange necromantic alchemy that binds them together
– A showcase of beautifully painted miniatures
– Painting advice including examples of bone, blades, armour, magical runes, spirits, banners, glowing skulls, bases and more
– Allegiance abilities for Ossiarch Bonereapers, including a table of battle traits, two command trait tables, four artefacts of power tables, and the Lore of the Mortisans spell table
– 7 warscroll battalions for fielding different combinations of models
– 17 unit warscrolls, 3 endless spell warscrolls and a warscroll for the Bone-tithe Nexus
– Pitched battle profiles for all units featured in this Battletome and the Bone-tithe Nexus, including min/max unit sizes, points values and battlefield roles 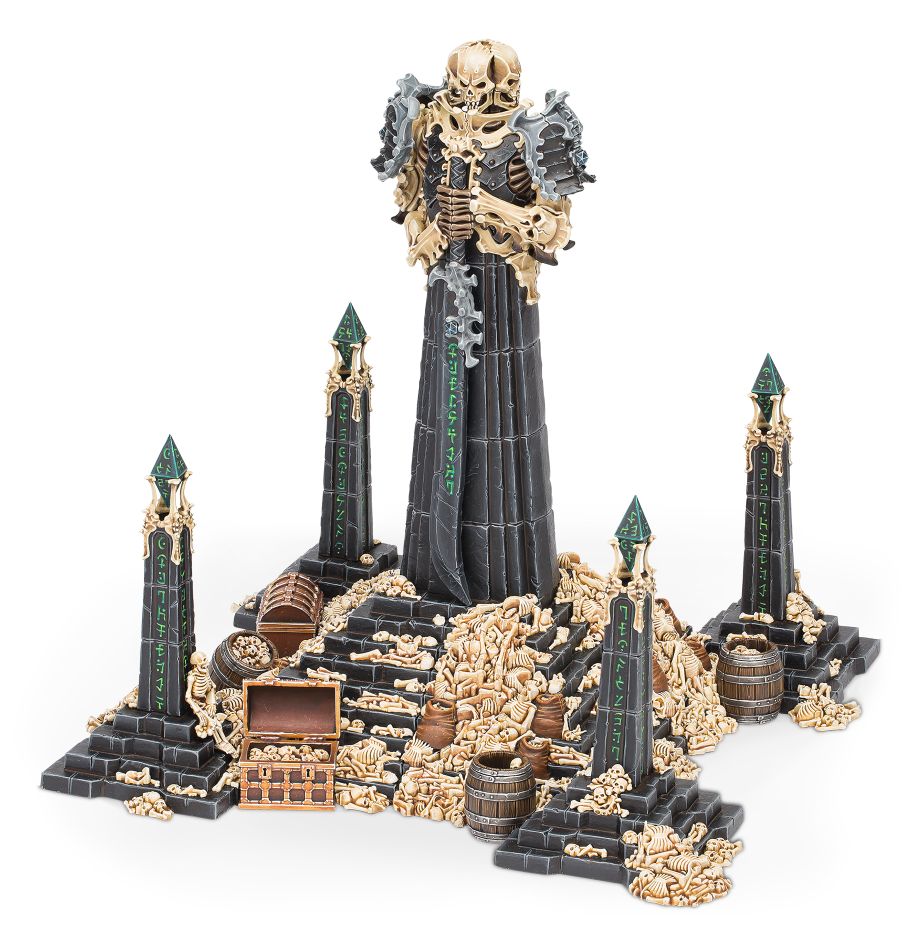 The Ossiarch tithemasters often demand their grisly bounty be left at designated nexuses of power. The soul energy and raw bone of these sites can be drawn upon to heal nearby Ossiarch constructs. If the vassals and mortals nearby refuse the tithe or break contract, the statue at the nexus’ heart lets loose its deadly gaze.

This terrain piece casts its deadly gaze over the battlefield and punishes any who defy the will of Nagash. Choose which sentence to unleash on your foes – the Punishments of Agony, Death, Ignorance or Lethargy. That will be the last time they refuse to pay up.

This 60-piece plastic kit makes one Bone-tithe Nexus, which stands nearly 8″ tall – that’s nearly the height of Nagash himself! 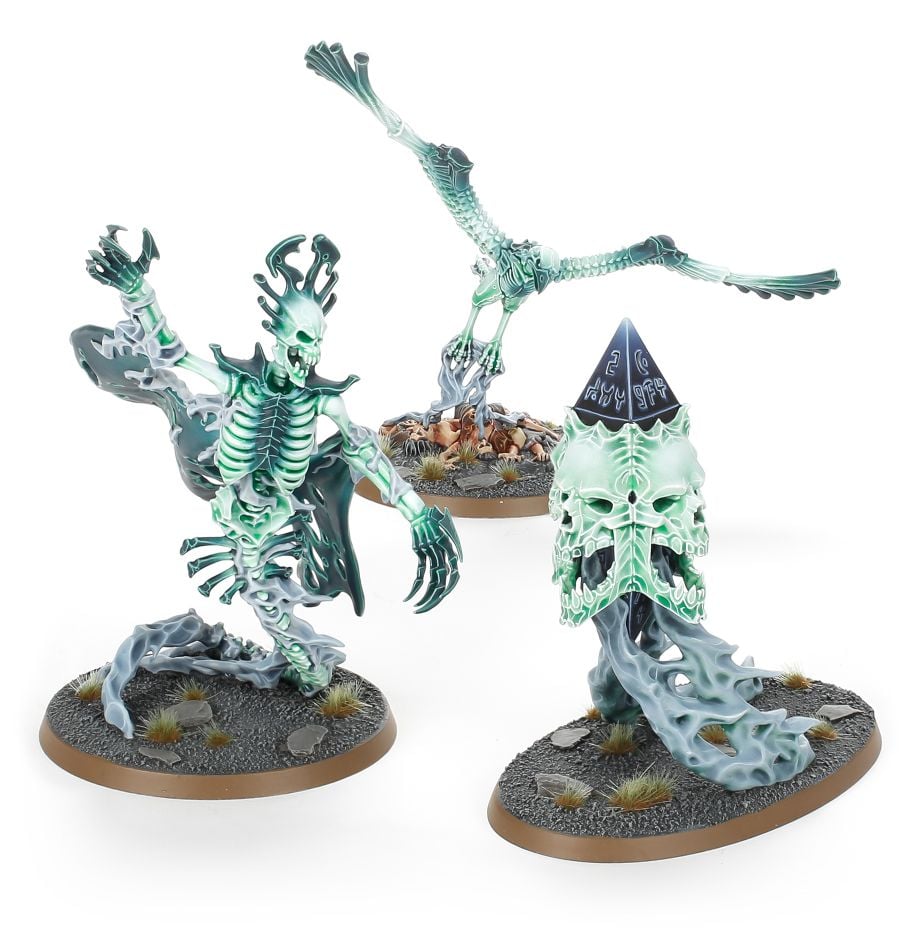 In this set you’ll find:

– Bone-tithe Shrieker – a four-headed monstrosity that spreads fear through enemy ranks while buffing the Bonereapers
– Soulstealer Carrion – a flying construct, soul-linked to a Wizard, that takes the souls from enemy warriors to either heal the caster or cause more damage
– Nightmare Predator – a massive skeletal construct that stalks a targeted enemy Hero and won’t stop until they are dead 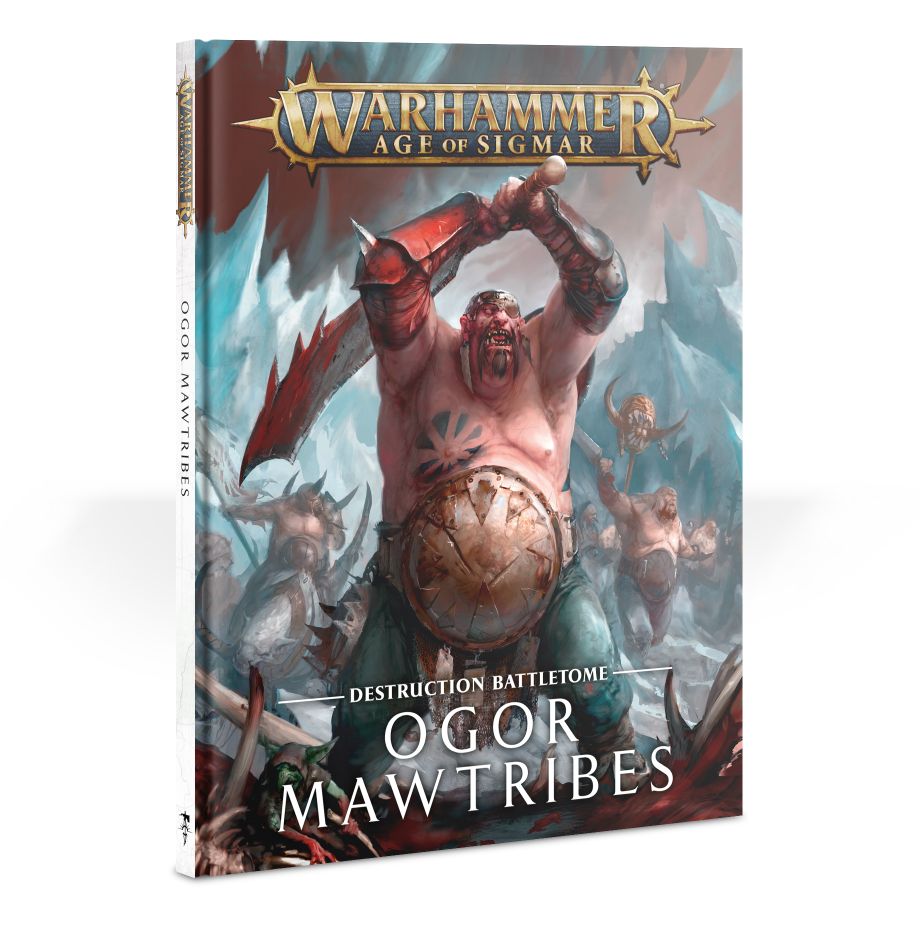 Ogors are rotund brutes entirely obsessed with eating and fighting. They rampage across the Mortal Realms on an endless, cyclical Mawpath, devouring everything they set their piggish eyes upon. Enemies are blasted apart by blackpowder cannons, gored by long-tusked beasts of the frozen wastes and trampled by a sweaty, bellowing mass of flesh. Only the lucky ones are dead before the ogors start to eat them.

Inside this 120-page book you’ll find overview of the Ogor Mawtribes and their two main cultures, which are united by their worship of Gorkamorka. A huge selection of rules gives you countless ways to play with your Ogor collection. Allegiance abilities bolster dedicated forces of Ogor Mawtribes, while rules for several legendary tribes allow you to tailor your army to suit your play style. Warscroll battalions reward you for fielding specific combinations of models, while Path to Glory warband creation rules and bespoke Ogor missions are perfect for your first few games. This battletome is also a great resource for collectors, featuring tips for painting details like rusted blades and ice weapons, as well as a showcase of beautifully painted Citadel miniatures to inspire your own collection.

– Lore and art that explores the history of the Ogor Mawtribes, and how they battle today
– A showcase of beautifully painted miniatures
– Painting advice including examples of different skin, rusted blades, gut-plates, clothes, tattoos, ice weapons, banner symbols, fur and more
– Allegiance abilities for Ogor Mawtribes, including a table of battle traits, four command trait tables, four artefacts of power tables, the Lore of Gutmagic and Lore of the Sun-Eater spell tables, an Everwinter Prayers table, and two mount traits tables
– 10 warscroll battalions for fielding different combinations of models
– 22 unit warscrolls and a scenery warscroll for the Great Mawpot
– Pitched battle profiles for all units featured in this Battletome and the Great Mawpot, including min/max unit sizes, points values and battlefield roles 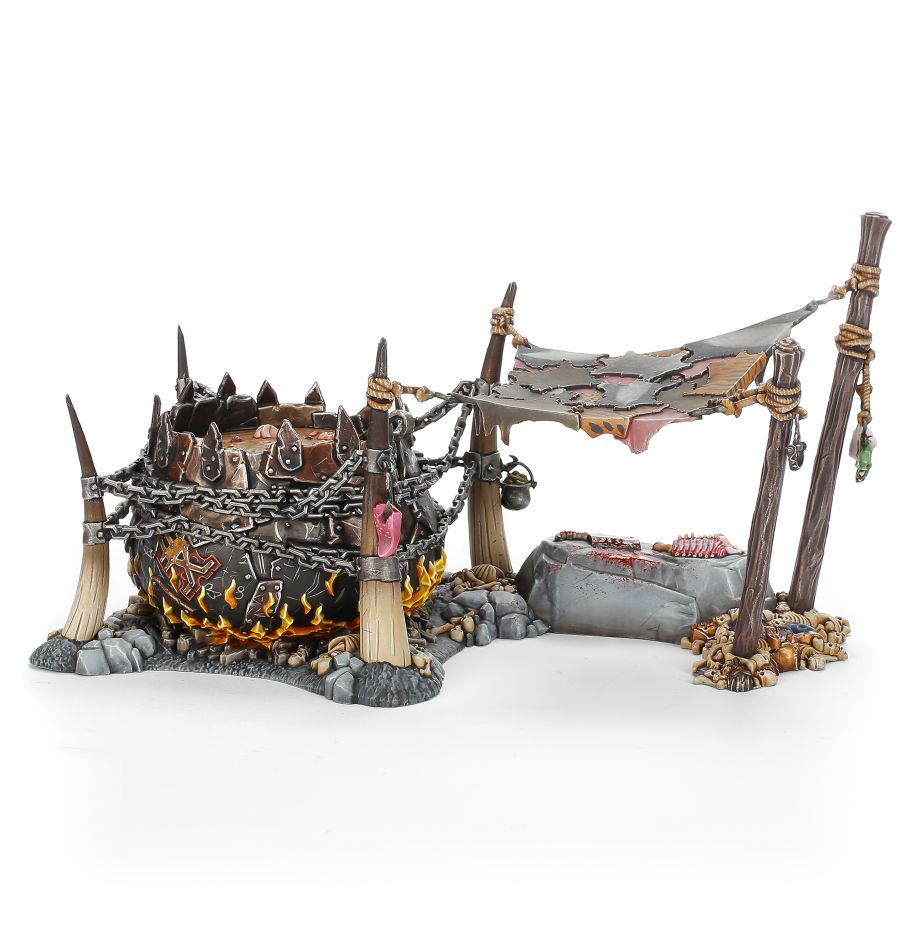 Crafted from the melted-down weapons of defeated enemies and blessed with the strange, hungry essence of the Gulping God, the Great Mawpot is a Mawtribe’s most sacred possession. All manner of gruesome ingredients are thrown into this metal cauldron and boiled up into a thick magical broth that reinvigorates any ogors who taste it.

This piece of terrain brings a number of benefits to an Ogor army. Any enemy models slain nearby can be thrown into the pot and cooked into a restorative broth that heals Mawtribe units. It’s also a vessel of the Gulping God, helping your nearby Wizards when they cast or attempt to unbind spells. 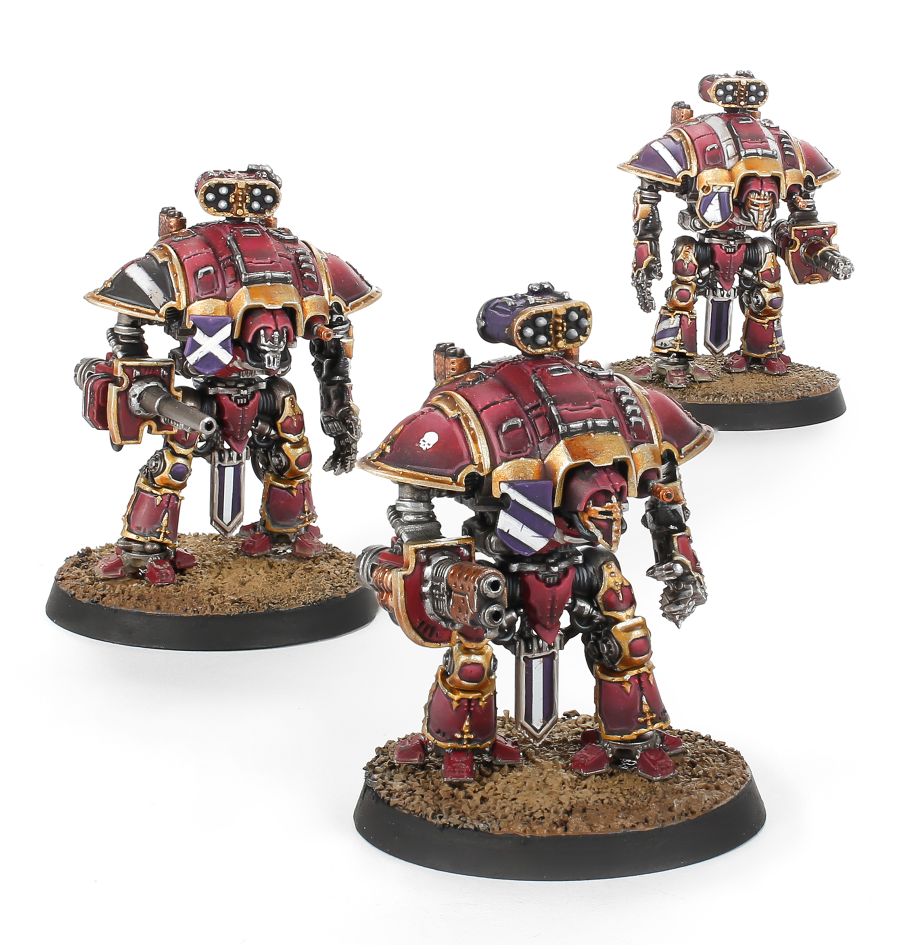 Knights are the agile war machines of the Knightly houses, each one commanded by a single skilled scion. When the Titan Legions mass for war, they call upon their allied Knightly Houses to aid them, the Questoris Support Banners acting as scouts and skirmishers for their larger kin. Bristling with fearsome weapons and protected by shimmering shields, Imperial Knights are amongst the most terrifying military assets in the galaxy.

This multipart plastic kit contains the components necessary to assemble three Questoris Knights for use in games of Adeptus Titanicus. Each of these machines can be armed with a variety of destructive weapons, from reaper chainswords and thunderstrike gauntlets for close combat, to thermal cannons, rapid fire battlecannons, avenger gatling cannons, rocket pods and choice of heavy stubbers and meltaguns. Each of these options allows you to use your Knights differently in battle, stripping shields from enemy Titans, hunting opposing Knights or even closing in on mighty god-machines and delivering a coup de grâce in brutal melee combat.

This kit comes with enough components to build three Questoris Knights armed with a wide variety of weapons, along with alternate heads. The components include:

The models are also supplied with with three Citadel 40mm Round bases along with a decal sheet – this features heraldry for Houses Makabius, Vyronii, Malinax and Coldshroud.

Rules for using Questoris Knights in your games can be found in the Adeptus Titanicus Rules Set. 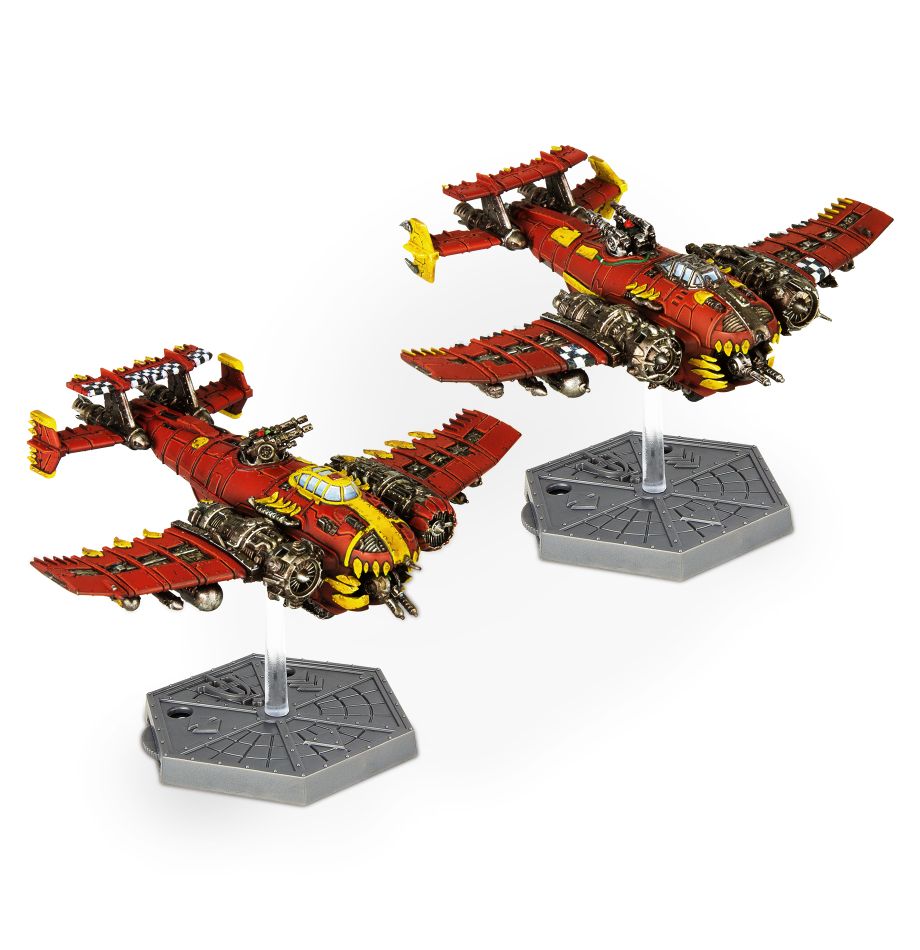 Eavy Bommers are one of the largest planes used in an Ork Air Waaagh! They are built with sustained bombardment in mind, and are recognisable by their distinctive engine sound – deeper in pitch and audible over the drone of all smaller Ork aircraft. It’s not just the rumble of an engine, it’s the sound of doom.