The time has finally come! The brand new Shadowspear Battlebox for Warhammer 40k is available to pre order today! To help support the site, and get yourself a nice discount too, dont forget to order from Element Games! 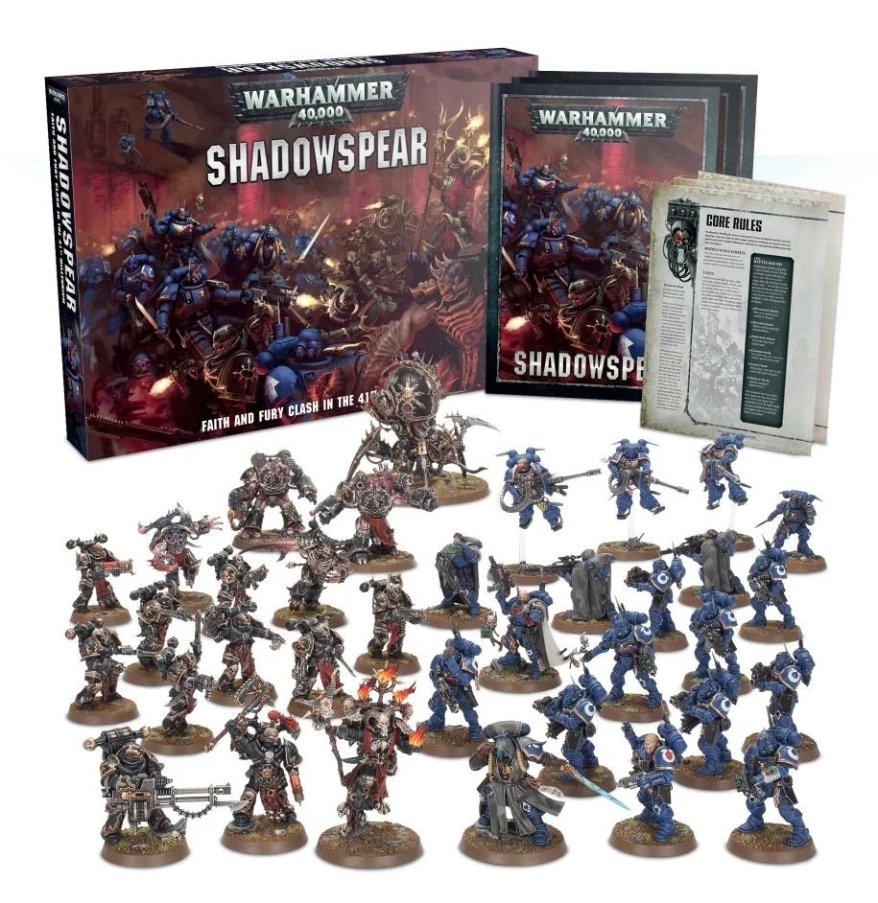 Shadowspear recreates the vicious fighting that took place across the corrupted wastes of Nemendghast, as Vanguard Space Marines of the Ultramarines 2nd Company clashed with the Master of Possession Vorash and his Daemonkin warband of the Black Legion.

Vanguard Space Marines are elite reconnaissance troops, trained to operate without support across the deadliest frontiers of the galaxy. Ranging far ahead of the main battle line, they prosecute full-spectrum campaigns of domination against the enemy by sabotaging communications, demolishing supply caches, and draining morale with terror strikes. Meanwhile, the devoted warriors of the Daemonkin believe that true ascension is only possible through the willing sacrifice of their living flesh. Led by Masters of Possession, they enact blasphemous rituals and commit increasingly terrible acts of slaughter, breaking the thin veil between realities and welcoming the raging spirits of the warp into their souls.

Shadowspear is a boxed set containing two armies split across the forces of the Vanguard Space Marines and Daemonkin Chaos Space Marines. You can use these miniatures to act out the scenarios described in the Shadowspear campaign book – six Crucible of War missions that can be played to recreate their bloody clashes on Nemendghast – and use them to expand your Heretic and Adeptus Astartes collections.

Included in the box:

– War Zone Vigilus: a brief history of this embattled sentinel world and the events leading up to the arrival of Abaddon’s infamous Black Legion
– Into the Void: introduces the Vanguard Space Marines and the forces of the Black Legion that they uncovered on Nemendghast
– War for Nemendghast – describes the war fought between Strike Force Shadowspear and the Daemonkin warband led by Master of Possession Vorash
– Game Rules & Missions: this section includes a tree campaign consisting of six Crucible of War missions inspired by the story explored earlier in this book

– Vanguard forces: a detailed background section on the Vanguard Space Marines, their bespoke wargear, heraldry and military role
– Datasheets: for the six new characters and units in the set
– Obscuration Discipline: a new psychic discipline unique to Vanguard Librarians
– Sons of the Primarch: Chapter Tactics, Warlord Traits and points values for the Vanguard Space Marine models, weapons and wargear

– Daemonkin: a detailed background section on the Daemonkin, their bespoke wargear, heraldry and military role
– Datasheets: for the five new characters and units in the set
– Malefic Discipline: a new psychic discipline unique to Chaos Space Marines
– The Lost and the Damned: Legion Traits, Warlord Traits and points values for the Daemonkin models, weapons and wargear