Ever since Warhammer Fantasy Battle introduced the massive box of goodies that was Triumph and Treachery (remember all those little coins and cards?) we’ve been big fans of the backstabbing and shenanigans that go hand in hand with this type of scenario.

For those who didn’t play this ruleset back in the day I’ll quickly cover the details.

Instead of normal turn priority, each player picked one of the included cards. These cards were then shuffled, and one by one they’d be picked to work out who went next. The coins were gained by destroying units (amount of coins were rounded up depending on the points cost of the unit you killed). These coins could be ‘bargained’ for to other players, so to pay someone off to charge a unit which would benefit you, or dispel a spell coming your way. The winner was the one with the most value in coins at the end of the game.

Triumph and Treachery can now be found in the Age of Sigmar rulebook however, we felt some of the old rules could be re-introduced to these scenarios to make for a more interesting, brutal, sneaky and back stabbing game and introduced to the 40k scenarios.

So here we have the Sprues and Brews edition of Triumph and Treachery in 40k!

Pick out your scenario and work out your deployment zones. We personally find for these games to have objectives that can be scored on every turn, not just whoever is sitting on an objective at the end of the game. This can be tricky to setup with 3 players, so I’ve made a diagram to show how we tackle this issue.

Ok…so that really isn’t too scale, but you get the idea. Each deployment zone is 24″x24″.

The players roll off to see how gets to pick the first deployment zone, and then has to place their first unit. Player 2 then picks theirs and places a unit, leaving player 3 with no choice but to go with the remaining zone and put down a unit. If theirs 4 of your playing, Player 4 then places a unit in their deployment zone.

Like the Fantasy battle version we’ve created 3 cards, each with an army name on it. These are then shuffled and drawn to work out who gets the first turn.

At the start of your turn you must declare your enemy. This is super important, as for your whole turn you can only attack your chosen enemy. You cannot charge, shoot, fight, use any psychic or built in abilities against someone who is not your enemy.

You can’t move your troops within an inch of any models, so whilst you can only prepare for a charge against your target player, you could move a unit to give another opponent something to think about, or prepare for a future turn.

The rest of the turn plays out like it normally would do, apart from no damage can be made to someone who is not your chosen enemy. Abilities like Smite, still can only target the closet enemy models, however you can ignore any other players units that are closer, as they aren’t your enemy for this turn. Abilities such as Nurgle’s Gift, which potentially could deal a mortal wound to any models within 7″, can only affect your target player’s minis.

End of Your Turn

Total up the victory points for your turn, then roll to see who goes next. 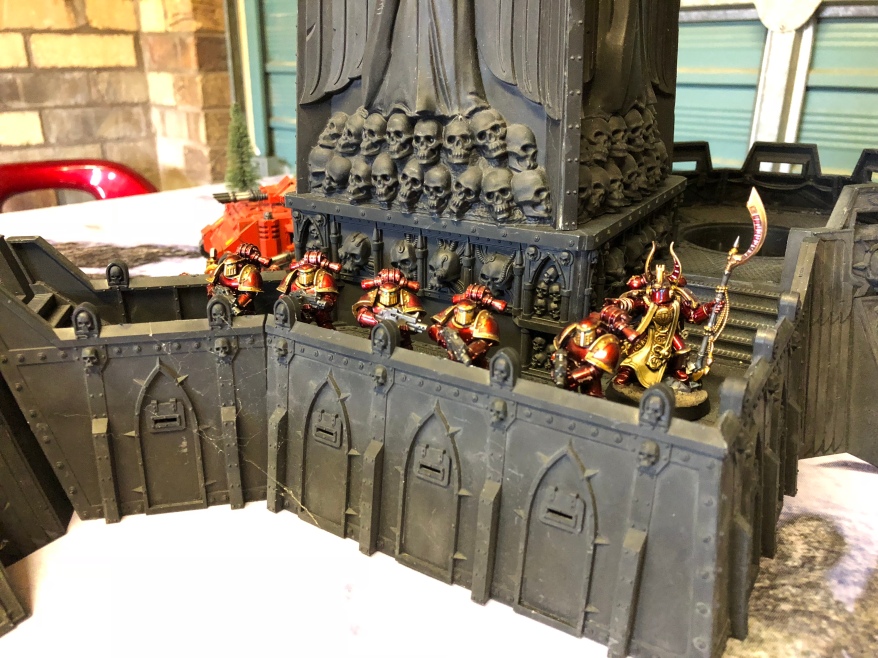 Combat and the Turn Order

When choosing your enemy, any combats that are engaged between your enemy and someone else breaks off.

In my first turn I’ve chosen Matt as my enemy. Matt however was in combat with Jason, so this combat is now ‘broken’ and each unit that was in combat falls back 1″.

This does not affect any ongoing combats between me and Matt if their was some already, as he is my target enemy.

This gives a lot of tactical options, and gives you plenty to think about, as the opposing player who isn’t your enemy could charge back in, which for a unit such as the Custodes Jetbikes could be very painful. However maybe they won’t pick you as the enemy, and instead go after another player, perhaps to claim an objective? The possibilities…

Don’t want a certain unit to be charged by your enemy? Perhaps you want one of your enemies to take a unit out for you?

You can use Command Points to gift other players as bribes to help you out. Whether they do or not…well…who knows.

We are contemplating allowing Victory Points to be used as bargaining tools, as some armies have much more CP than others. This could balance the game a little, and is riskier, as Victory Points win you the game.

In the Age of Sigmar rule book there is a table within the Triumph and Treachery book which includes secret missions. We haven’t tried introducing these yet, but I think we will be on the next game. Again it gives a further tactical and sneaky element to the game.

We chart each time a target enemy is chosen by a player, so that after the game we can see which army was ‘picked on’ the most.

We think these games are a blast, as they are so unpredictable and requires a lot of forward planning. Trying to second guess what the other players may do.

It’s also important to remember, as with all games of Warhammer (or any other tabletop game in fact!) that the main rules is to have fun, and play nicely!

We’d love to know what you guys think of this ruleset, and would love to know if any of you give it a go, or play something very similar. Let us know via the comments or by getting in touch via Social Media. We’d love to hear your feedback and experiences. Maybe you know of a way to improve the gameplay, again please get in touch.