Some exciting news from Warhammer Community, the Warhammer Age of Sigmar Champions Card Game is out Saturday! Check out the preview below! We have ordered a founder’s pack and will be doing a full review once it arrives!

Warhammer Age of Sigmar: Champions is coming – a next-generation card game by PlayFusion where you can build decks, collect your favourite heroes and fight intense tactical card battles with your friends. It will be landing on shelves this week, so let’s take a look at how it all works.

Warhammer Age of Sigmar: Champions will be available from this weekend in Warhammer and Games Workshop stores near you – here’s how it works…

Building a deck for Warhammer Champions starts with picking your four favourite heroes, or Champion Cards. These guys are the core of how your game works, each possessing unique and powerful abilities that’ll impact the entire game. 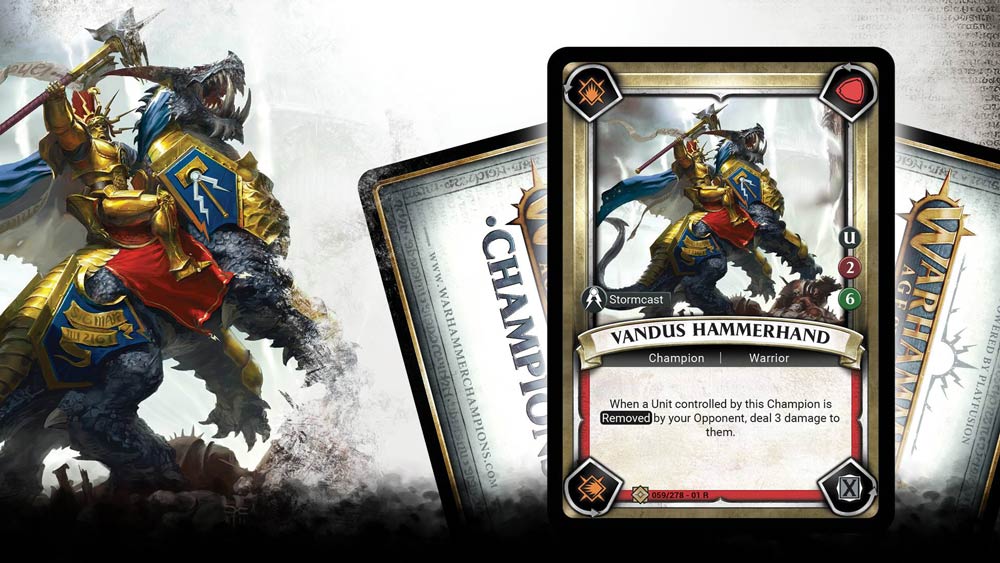 After that, you’ll pick four Blessing Cards – powerful artefacts and magical spells with game-changing effects that your heroes can access later in the game.

Finally, you’ll build a deck of 30 Action Cards – units, spells and moves that your Champions can send against the foe. 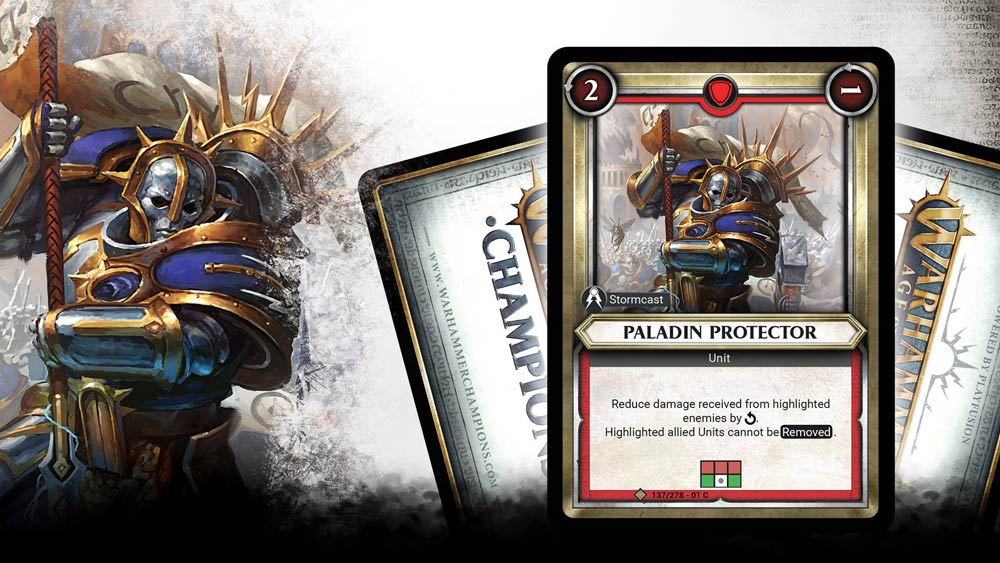 In Warhammer Age of Sigmar Champions, your aim is to slay your foe. To do so, you’ll need to combine the individual skills of your Champions with the right Actions for the right moment, all the while working towards unlocking your Blessings before your foe does so. 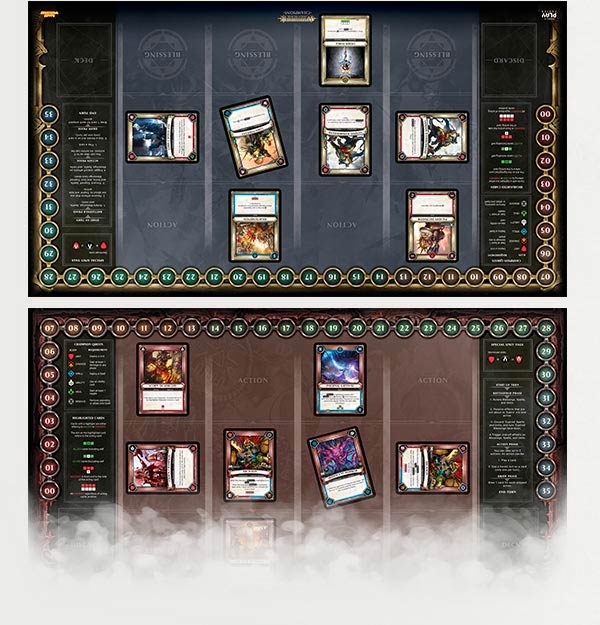 The game is split into four lanes, each containing two opposing Champions and hidden Blessings for them to unlock. Every turn, you can take two actions – from summoning cards from your hand to performing Heroic Actions and drawing new cards.

This is where things get interesting. Warhammer Age of Sigmar: Champions features an innovative new mechanic where your cards rotate each turn – each time they do so, they’ll use new stats found on the corners of their cards.

Every turn, you’ll rotate each of your cards 90 degrees, triggering a different effect before the card rotates out. A mystical barrier might get stronger and stronger before dissipating, while a Khornate warrior could attack in a frenzied, brutal charge before disappearing. Gameplay is highly dynamic, as you balance each of your lanes on the board while trying to empower your Champions by completing quests – specific actions that allow them to unlock their Blessings. 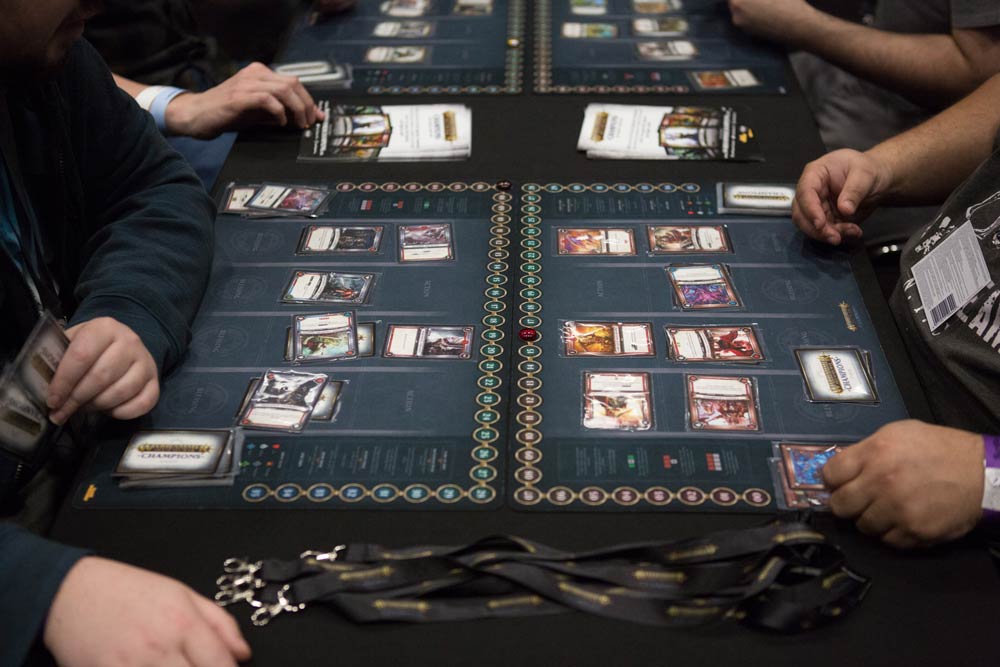 In practice, games are fast-paced and fun, taking no more than 15-20 minutes, allowing you to easily squeeze in sessions on your lunch break or while you’re waiting for a game of Warhammer Age of Sigmar, or even playing several rounds at your gaming club.

Warhammer Age of Sigmar: Champions is built from the ground up to work on your mobile (and eventually your PC, via Steam) with an integrated digital app that allows you to play the game on the go.

If you own a card in real life, you’ll own it online, too, meaning you’ll be able to use your favourite decks wherever you are. Test out new strategies online before bringing them to your next gaming night or play with your mates even when they’re in different countries – it’s all super-simple.

If you’re looking to get started with Warhammer Age of Sigmar: Champions, the best way to do it is with a Campaign Deck – a pre-constructed set of cards that contains everything you need to start playing. There’s a Campaign Deck for each Grand Alliance, containing a powerful pre-built collection of cards to get you started, as well as the rules and a nifty playmat. 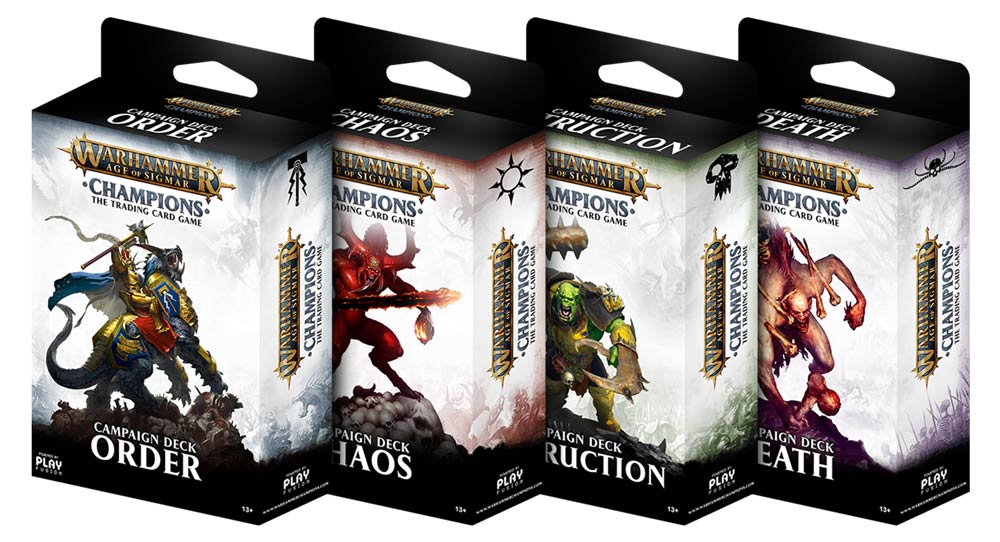 When you’re ready to try deck building yourself, there’s even a sealed booster pack included in the set.

New cards for Warhammer Age of Sigmar: Champions can be found in sealed boosters, each containing a random selection of cards for you to try in your games. Inside each, you’ll get a spread of cards, including a guaranteed two Champion or Blessing Cards, at least one rare card and at least one special foil card. 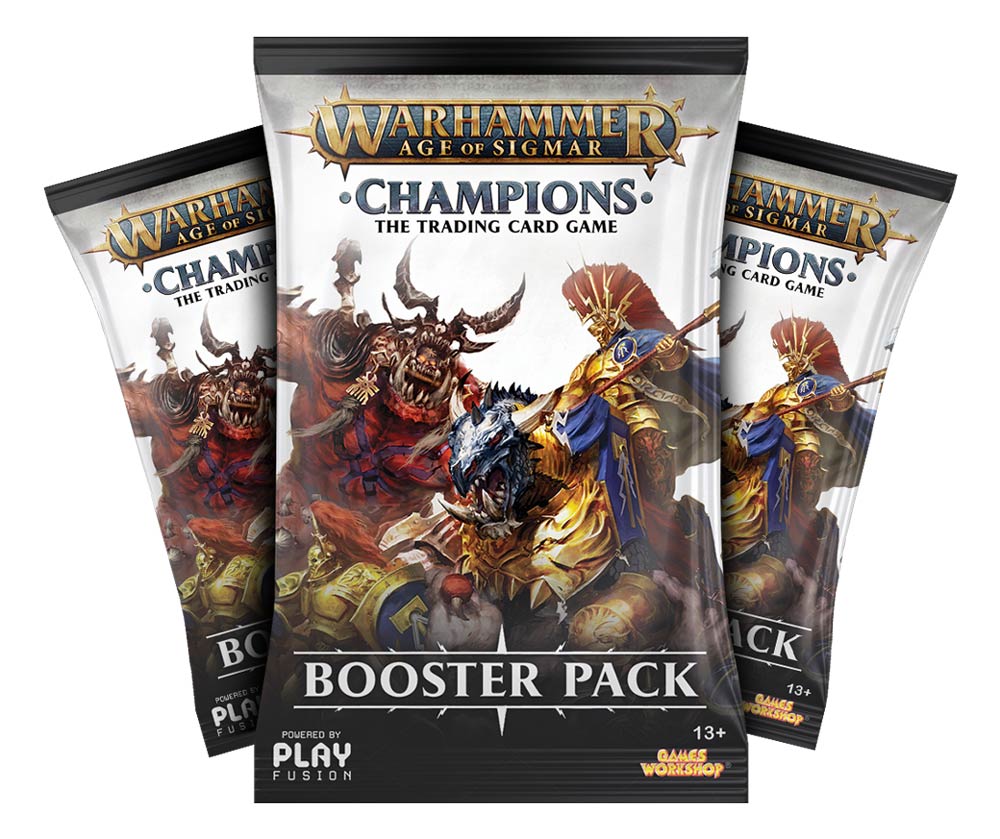 Where to Get It

Warhammer Age of Sigmar: Champions will be available this weekend from Warhammer and Games Workshop stores in English-speaking regions – including the USA, UK, Canada, Australia and New Zealand – as well as from participating stockists.

OR, if you’re going to be at GenCon this week, you’ll have the chance to get your hands on the game before anyone else. Stop by and say hi to PlayFusion at booth #555 to get your hands on an early copy as well as some show-exclusive goodies, such as this snazzy gaming mat: 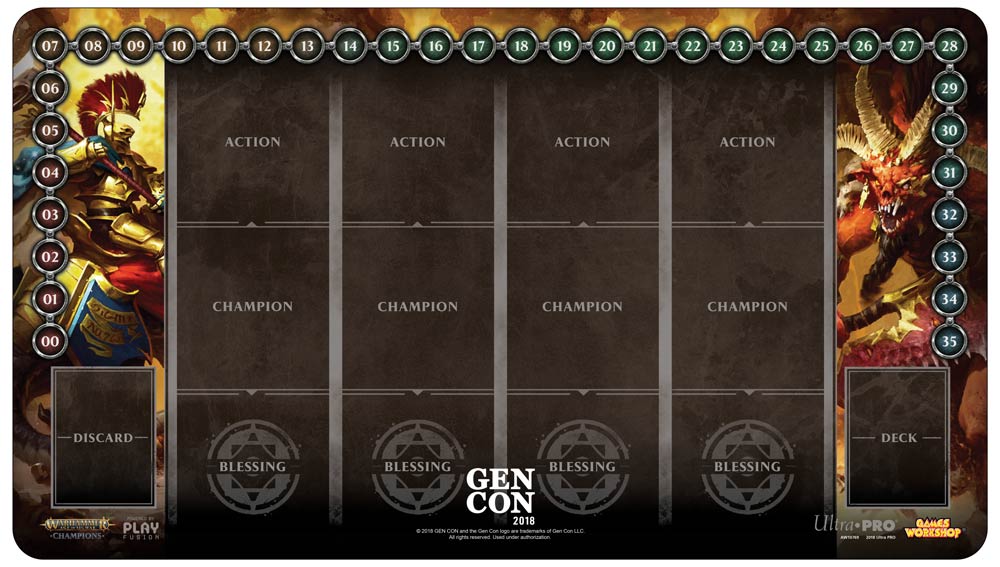