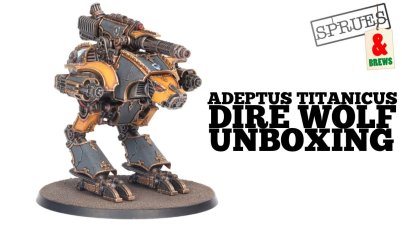 Today we check out a new addition to the Adeptus Titanicus game in the new Dire World Heavy Scout Titan, a particularly sneaky titan with the ability to deploy very […]

Today at the Warhammer World Horus Heresy Open Day, Forge World had the brand new Ka’bandha Daemon general of Signus available to attendees! And as resident Daemon fan, I just […]

Podcast: Episode 184 Heading into the Ash Wastes of Necromunda

In this week’s episode we venture into the Ash Wastes of Necromunda with the awesome new Boxed set from Games Workshop! Matt, Jay and Andy also get very excited about […]

The underhives of Necromunda are a horrific existence, where gangs fight for existence and influence in a life of grim combat and survival. Many dream of an existence beyond the […]

Exciting news for Necromunda fans, WarCom have shared today that the Ash Wastes box (And a host of Necromunda goodies including the Nomads and Quads!) are up for pre order […]

The dead are back and are taking Warhammer Underworlds by storm………. The Exiled Dead are here along with the Rivals of Harrowdeep box. Thank you to Gamesworkshop for sending us […]

Next Week – Warhammer Underworlds Nethermaze up for Pre order