Open the door, get on the floor, everybody walk the Dinosaur! The brand new Seraphon Battletome is up for pre order today alongside a host of new Warhammer Age of Sigmar Start Collecting! sets. If you would like to support the site then why not order through Element Games and save yourself 20% too! 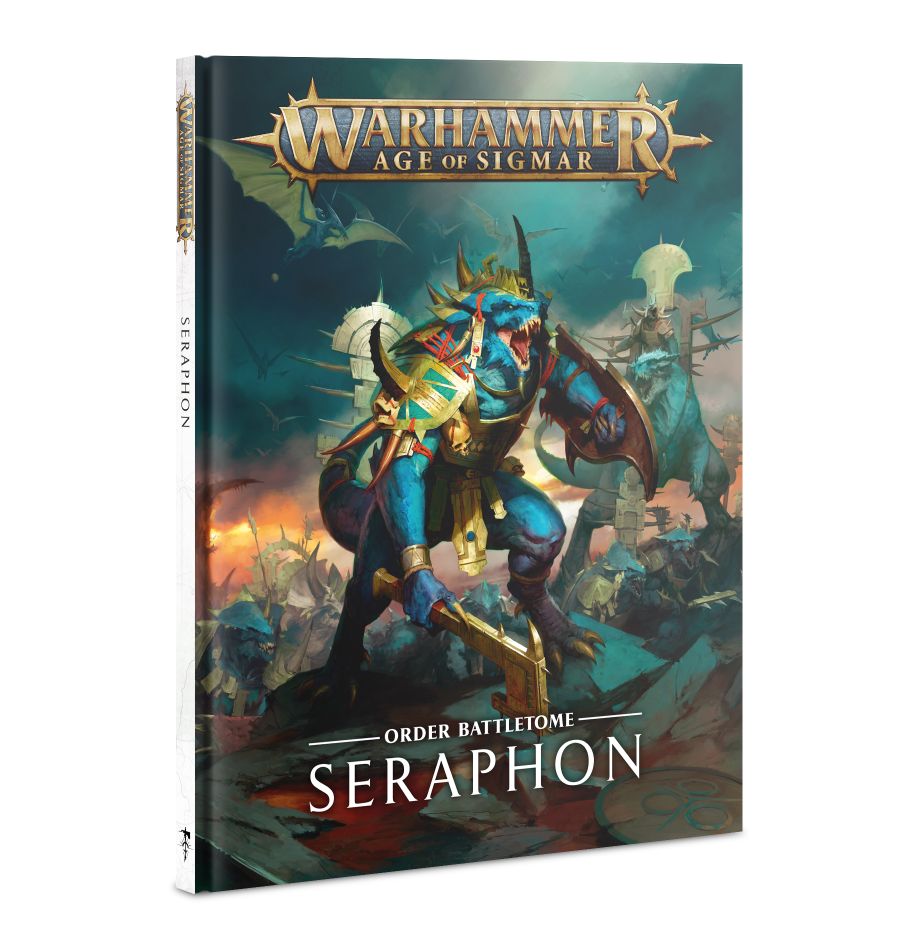 The cold‐blooded Seraphon strive to enact the Great Plan of the Old Ones, their ancient and mysterious creators. They are utterly dedicated to the destruction of Chaos, and will show no mercy to any who stand in their way. Commanded by the slann, cohorts of brutal saurus are bolstered by swift skinks and towering reptilian behemoths. Those who stand before them soon find themselves met by the unfeeling wrath of the cosmos.

In Battletome: Seraphon, the might of the heavens is yours to command! This tome of rules, art and lore is your complete guide to these avenging lizardmen and their monstrous armies. Discover why the Seraphon came to the Mortal Realms, how their society works, from the celestial beings known as the Starborne to the savage reptilian Coalesced. Learn their lore, get inspired and field an army for yourself with a suite of powerful and thematic rules, including allegiance abilities, spell lores, artefacts and more.

Maybe you’ll field a magically charged force of Starborne Seraphon, teleporting around the battlefield, blitzing enemies with spells and summoning reinforcements from the temple-ships to battle. Or perhaps you’ll field a hardened force of Coalesced, tearing the enemy apart in close combat with savage fury. Or you might just field loads of Stegadons and call it a day. It’s up to you! To help you with your army, this book also contains collecting tips, with example armies, stunningly painted miniatures, painting advice and Path to Glory rules.

This 104 page hardback book contains:
– The history and origins of the Seraphon – from their discovery in the aetheric void by Dracothion to their conquest and terraforming of the Mortal Realms
– Lore and art that brings the world of the Seraphon to life
– Tips for collecting Seraphon, and rules that allow you to fight battles with them on the tabletop
– Allegiance abilities that bestow a wide selection of battle traits, command traits, artefacts of power and unique spell lores upon your army
– A battleplan representing a sudden intervention from above by the Seraphon
– Rules themed around the four most famed Seraphon Constellations – sub-factions with their own additional special rules 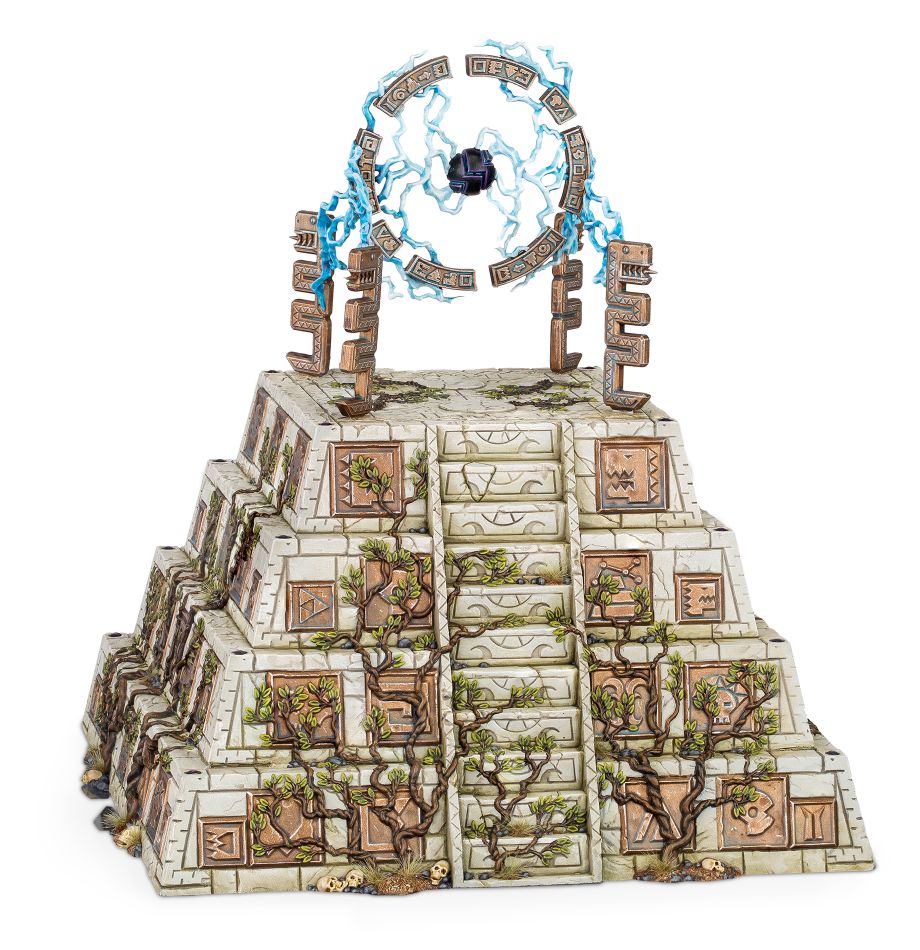 There are no lengths the Seraphon will not go to in order to see the Great Plan fulfilled. At a Starmaster’s decree, Realmshaper Engines are deployed to remake reality in line with the Old Ones’ will, rendering the lands a primordial haven for the lizardfolk and a sweltering, inhospitable nightmare for their foes.

The very battlefield itself is yours to remake with the Realmshaper Engine – a massive scenery piece that’s ideal for Seraphon armies or those looking to build sprawling temple-complexes in the Mortal Realms. Whether hosting a garrison of Seraphon troops, smiting enemies with the land itself or just making for an interesting bit of tactical terrain to battle over, it’s a cracking addition to your scenery collection.

This set builds one Realmshaper Engine. Thanks to innovative design, you can build a squeaky-clean version of this massive edifice, or one covered in thick vines and foliage – perfect for distinguishing between Coalesced and Starborne Realmshaper Engines. Combine several sets to make an impressive temple-city of your own!

This set is supplied in 42 plastic components. 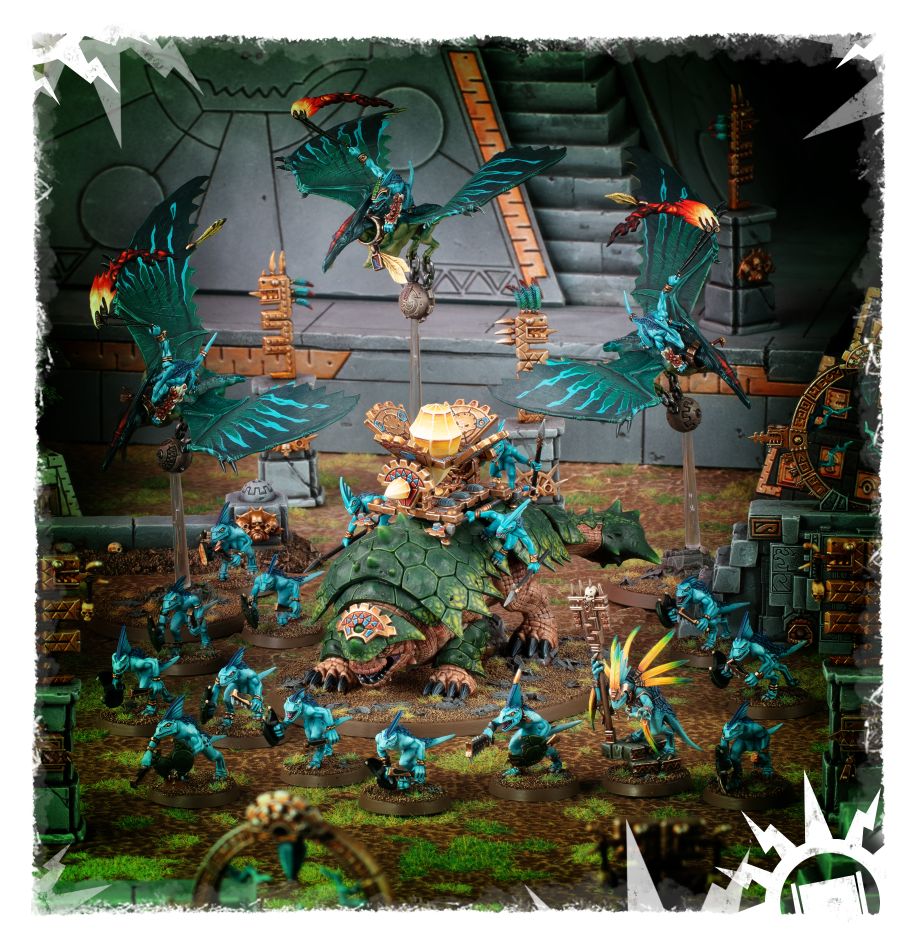 Skinks! They’re impossible not to love. These diminutive lizardmen are loved by canny generals for their speed, lore fans for their cunning and model-makers for just how inexplicably cute they are – so we’ve made it easier than ever to field a whole army of the little guys.

Start Collecting! Skinks makes starting a Skink based army of Seraphon super simple. Inside, you’ll find a Skink Starpriest to lead your forces, a unit of skirmishing Skinks to scout ahead of them, 3 swift Terradon Riders (also buildable as Ripperdactyl Riders!) and a Bastiladon – a dinosaur with a laser. Need we say more? If you’re somehow not convinced, it also saves you money compared to getting the kits separately – and contains an exclusive warscroll battalion warscroll to boot!

1x Skink Starpriest
12x Skinks, with various weapon and equipment options including meteoric javelins, star-bucklers, celestite daggers, boltspitters and moonstone clubs
3x Terradon Riders, with the alternative option to build 3 Ripperdactyl Riders, or a Terradon Chief, or a Ripperdactyl Chief
1x Bastiladon armed with your choice of an Ark of Sotek or Solar Engine 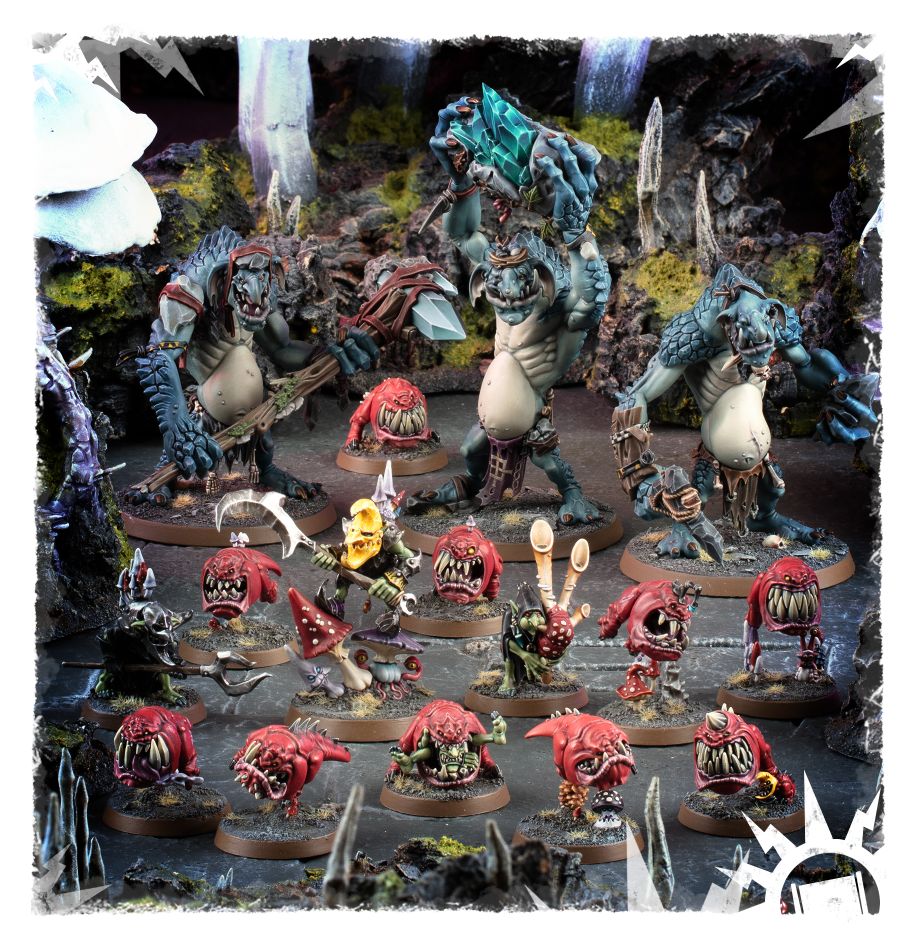 Do you feel the call of the Bad Moon? Burst forth from your dankholds to raid the Mortal Realms with this Start Collecting! set.

The rules for these models can be found in Battletome: Gloomspite Gitz. 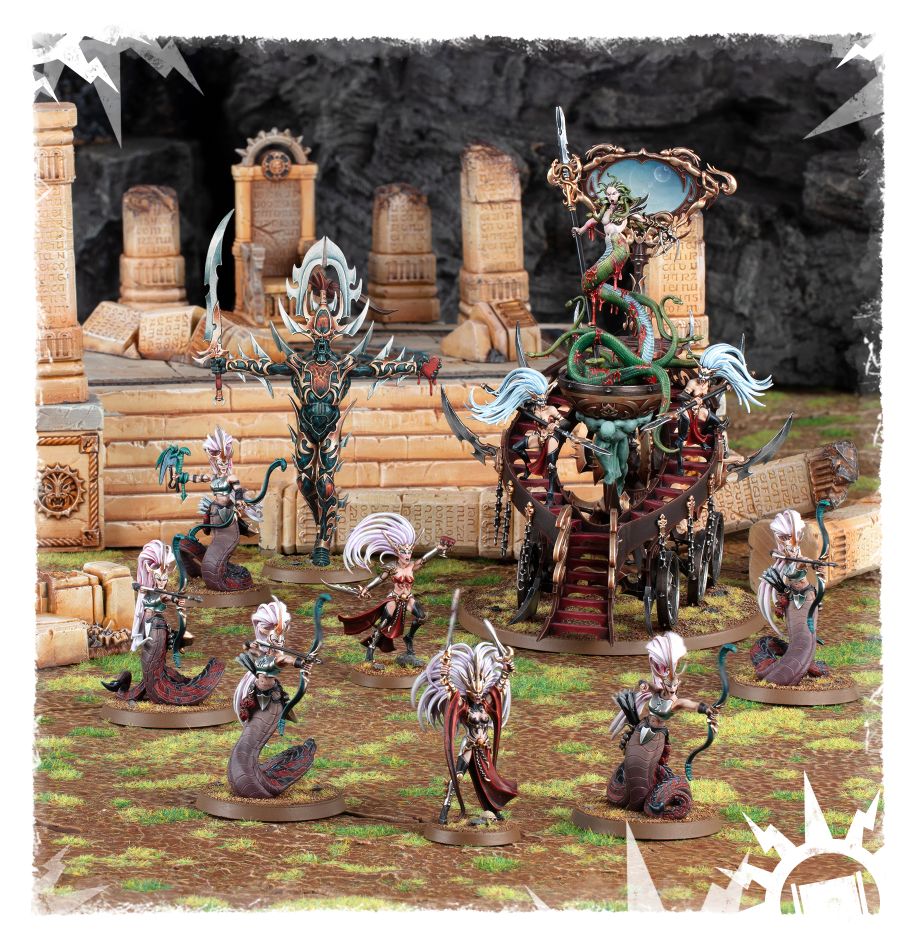 Lead the graceful and deadly Daughters of Khaine into battle for the glory of the God of Murder with this Start Collecting! set.

The set can be assembled in one of two ways:

The rules for these models can be found in Battletome: Daughters of Khaine.