Lots of awesome stuff coming for Warcry, Necromunda and Middle-Earth next week including stand alone kits for the awesome Zone Mortalis scenery!

Check out all the details over on Warhammer Community

Next week is set to be epic with the release of new monsters and warbands for Warcry, new gangs and scenery for Necromunda, and a host of models returning for the Middle-earth Strategy Battle Game. Plus, there are some incredible new releases for Black Library. Take a deep breath!

Stomp your enemies into the ground and claim dominance over the Eightpoints with the Ogroid Myrmidon! These savage beasts hone their combat skills in the fighting pits of the Varanspire and are ideal for accompanying any who seek to join the Everchosen’s legions. If you’ve already joined the Slaves to Darkness, then you can also unleash the Ogroid Myrmidon upon the Mortal Realms too. 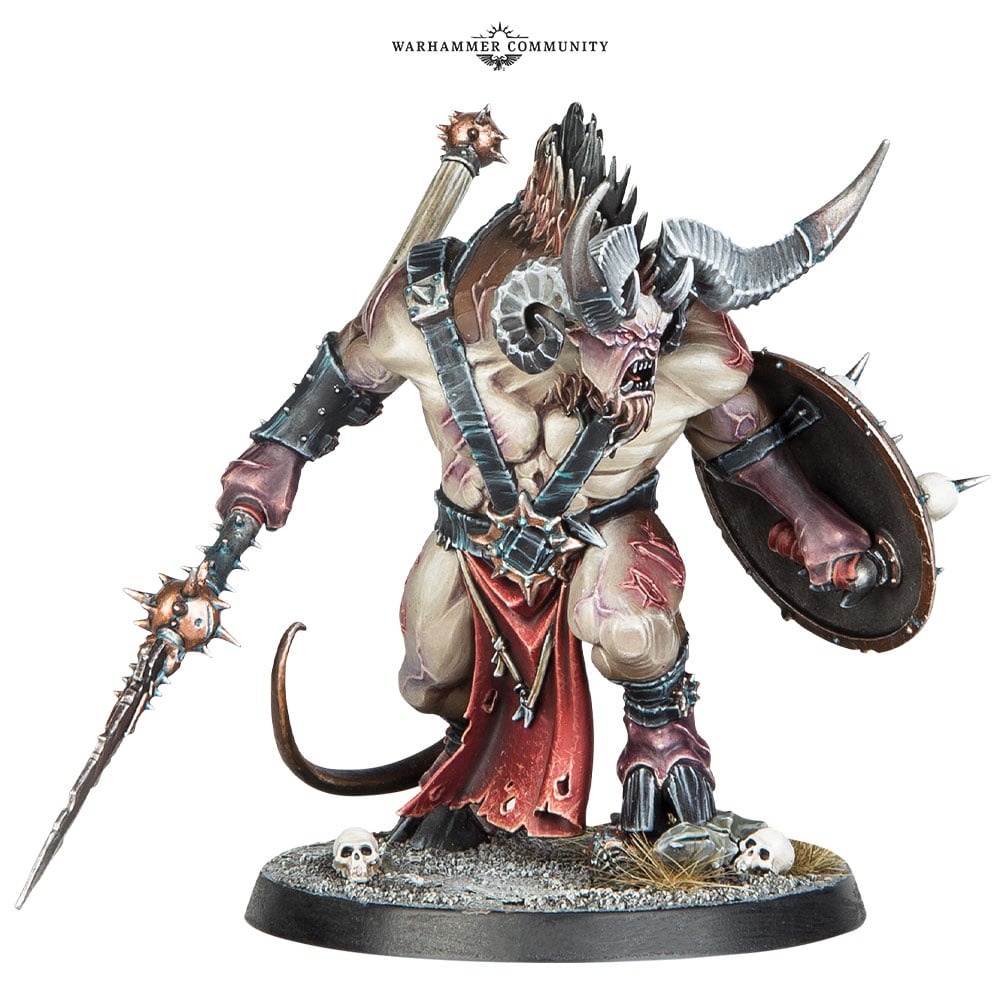 Also from the Varanspire fighting pits are the infamous Spire Tyrants, the most ferocious gladiators to have survived these gauntlets of bloody violence. Now, they’re ready to show all of these Johnny-come-latelies who’ve shown up to the Eightpoints who’s really ready to earn glory at the Everchosen’s side. The kit comes with nine fighters, including a Bestigor Destroyer and a Frenzied Rager* – awesome models that are a unique Warcry take on these classic races – alongside all of the fighter and warband cards. As with all of the other Warcry warbands, the Spire Tyrants can also be added to a Slaves of Darkness army in Warhammer Age of Sigmar. 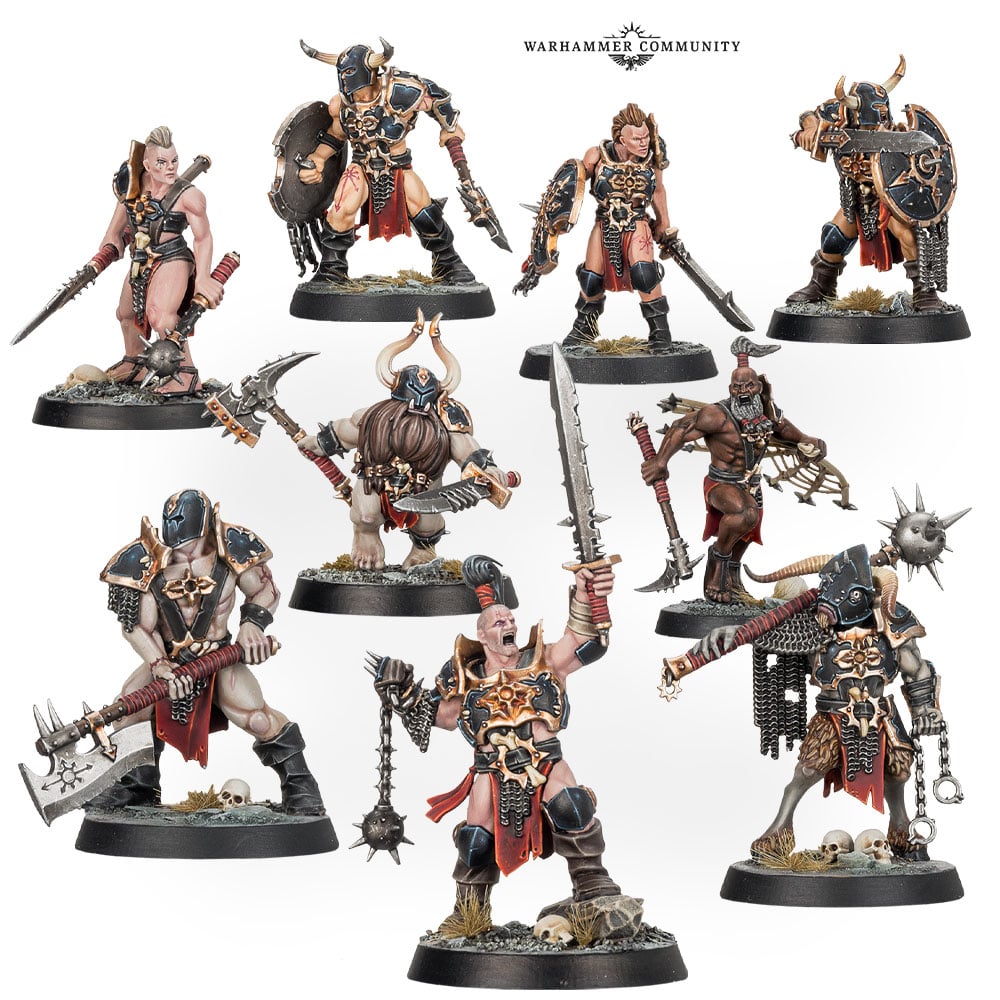 We also have the first three boxes of non-Chaos warbands coming to Warcry. While you’ve always been able to use Stormcast Eternals, Gloomspite Gitz and Nighthaunt against the endless tribes of Chaos, these kits offer a new way to easily put together a warband. Each comes with a selection of fighters and all of the tokens, ability cards and fighter cards that you need to play, meaning you’re ready to go straight out of the box. The Gloomspite Gitz and Nighthaunt also feature an exclusive fighter, bringing Sneaky Snufflers and Myrmourn Banshees to the Eightpoints for the first time. 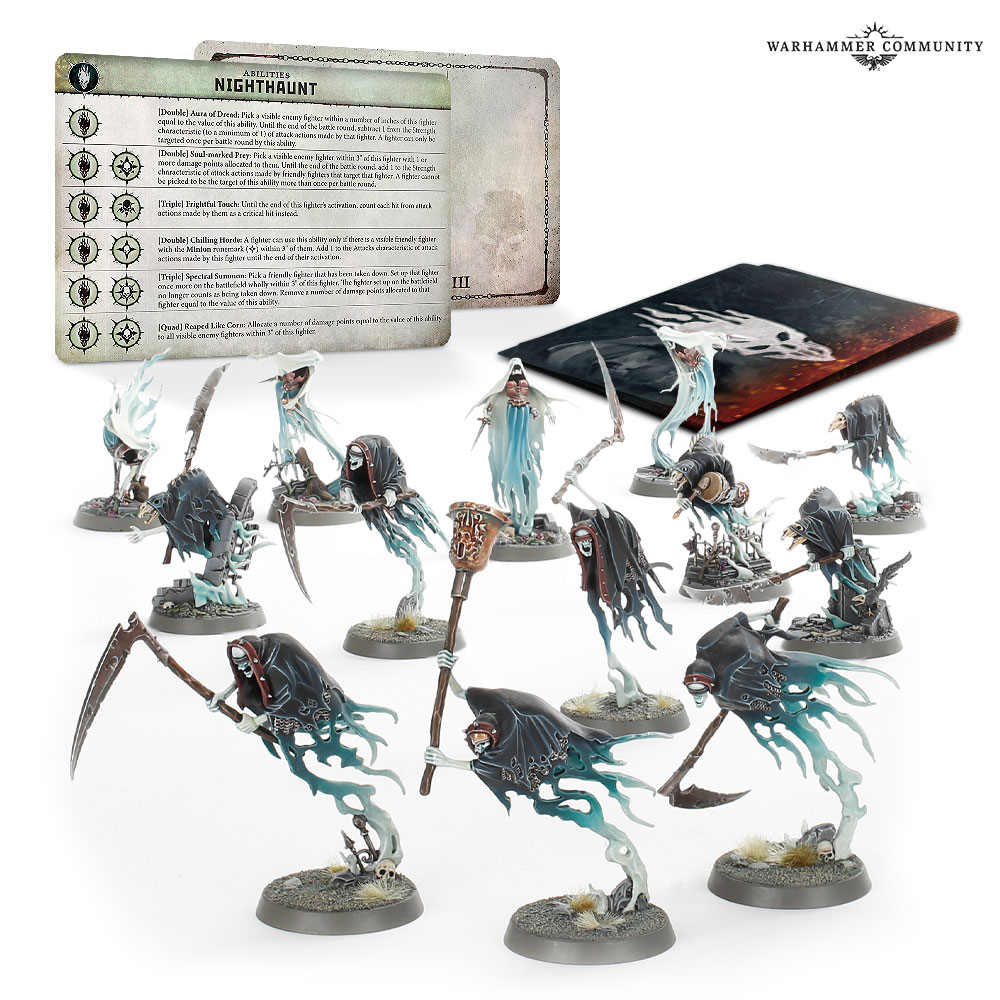 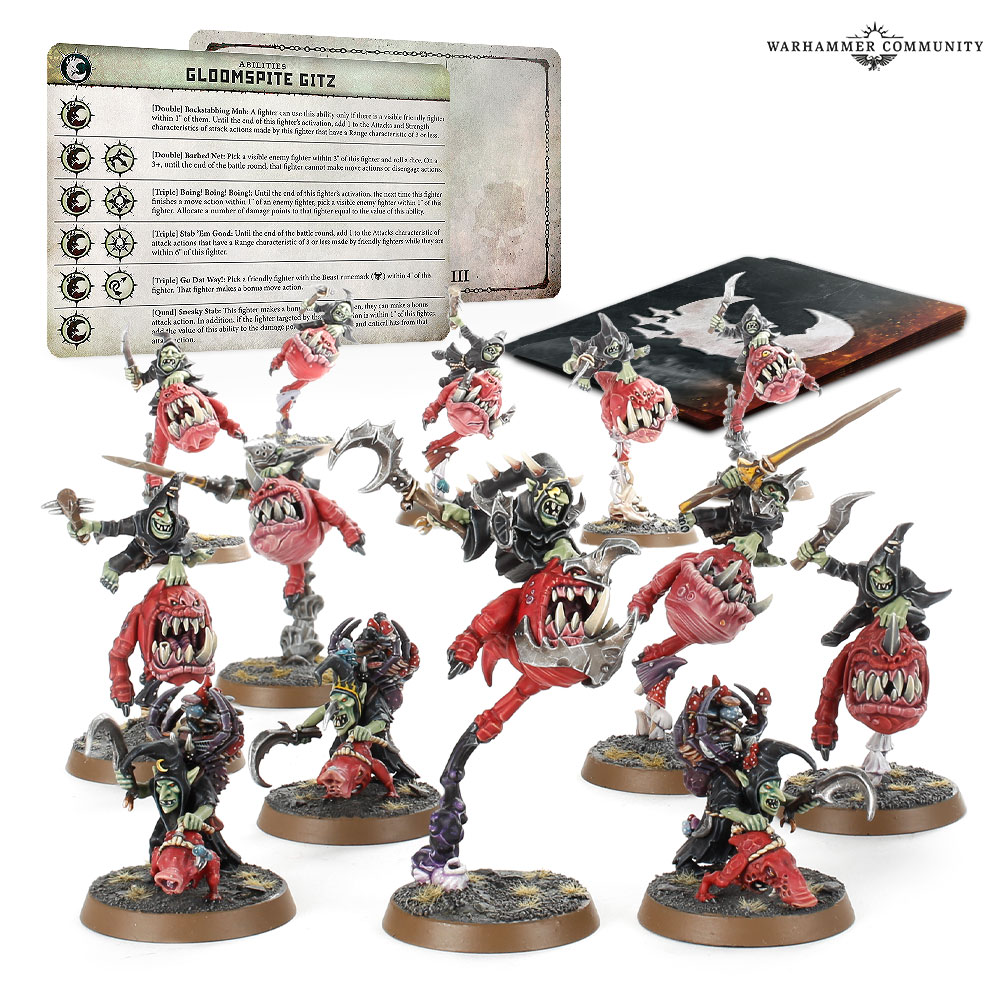 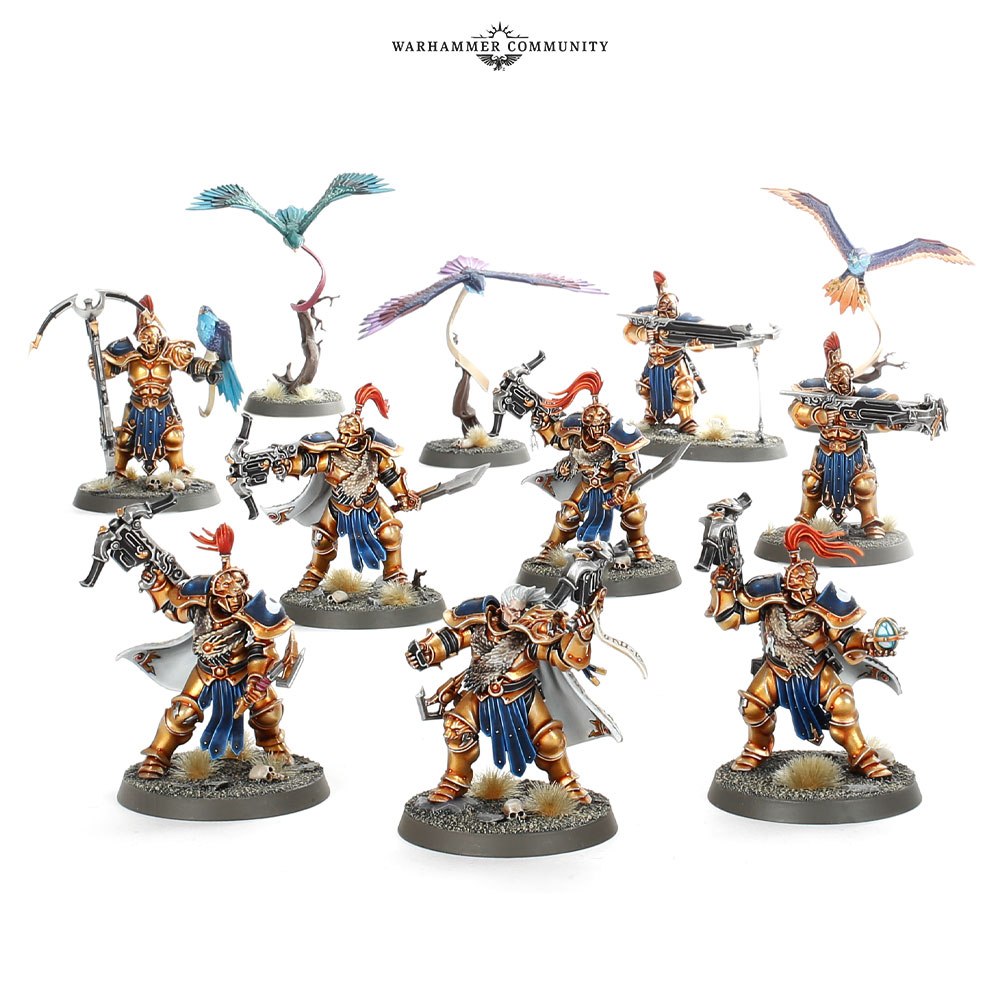 Alongside these models, nine new card packs allow you to use your Warhammer Age of Sigmar models in Warcry. Each pack includes fighter cards, showing you the characteristics of the fighters, a faction ability card detailing the unique abilities exclusive to that warband, and divider cards so that you can keep track of any tokens that apply to fighters in games. 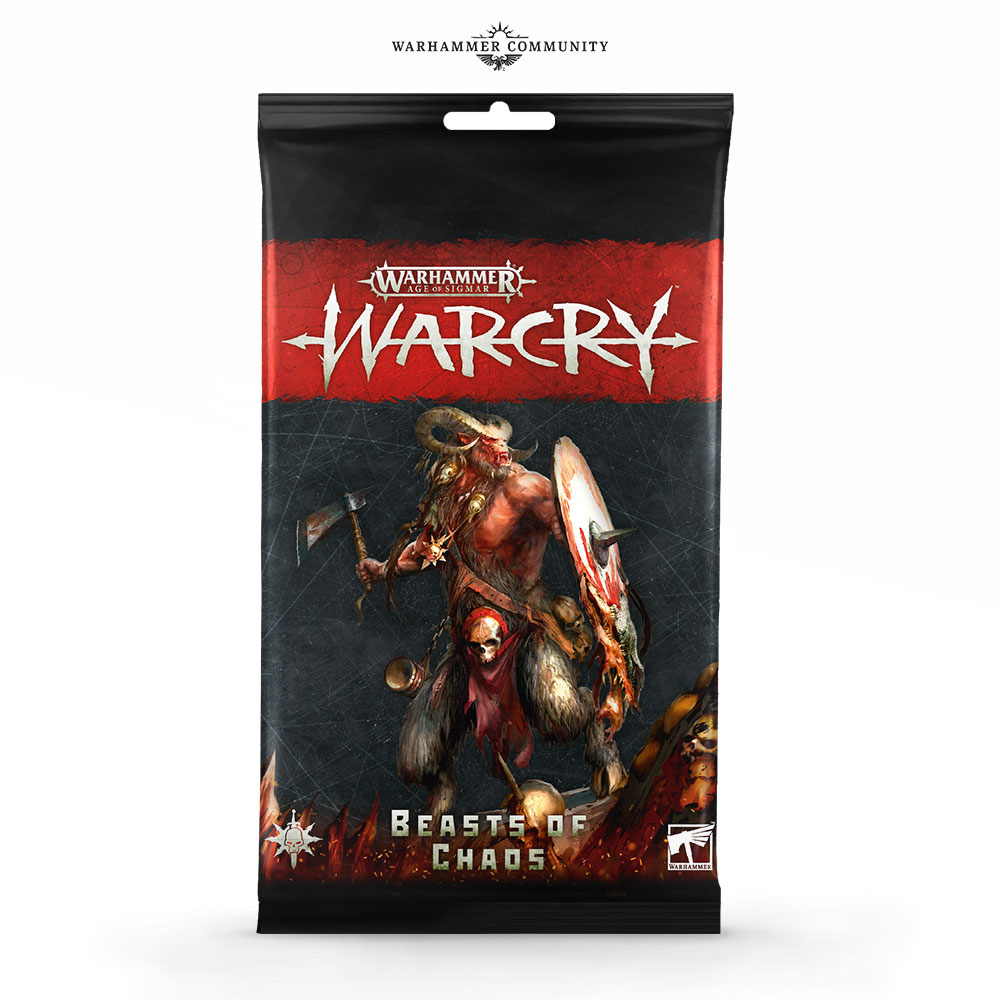 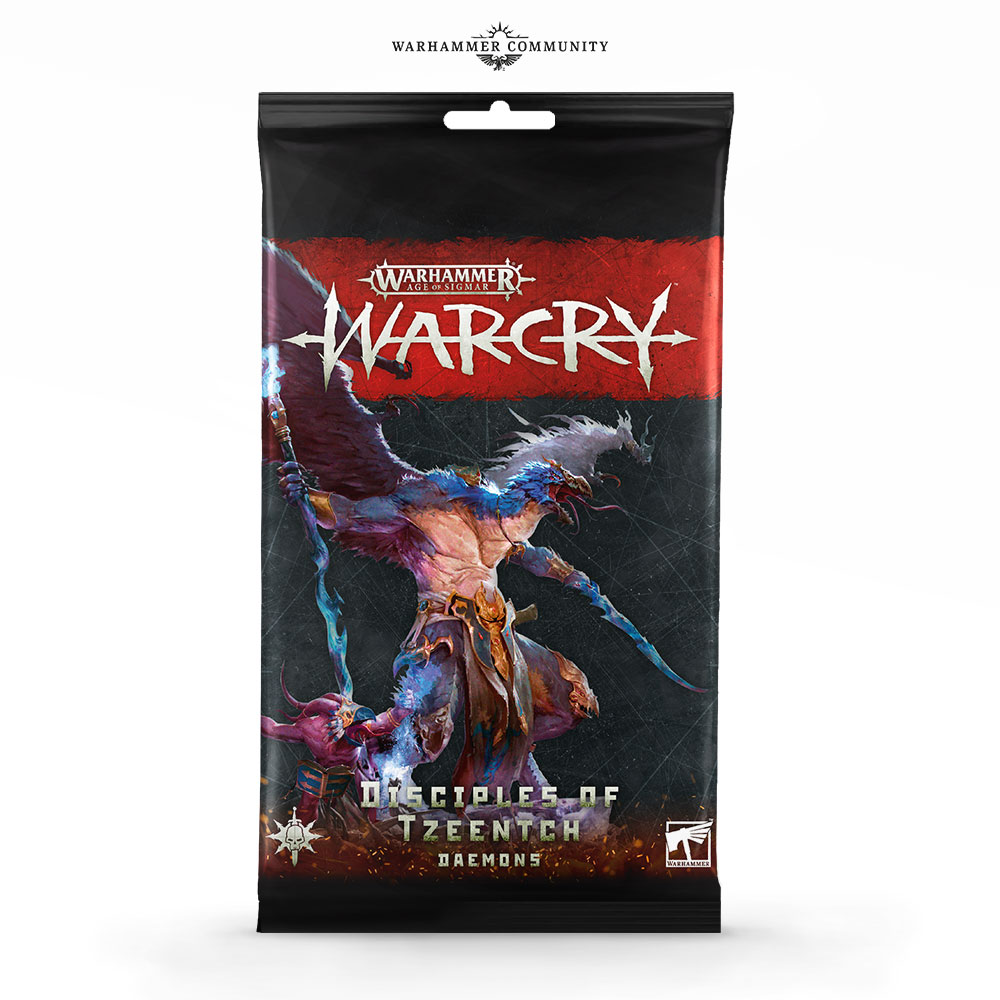 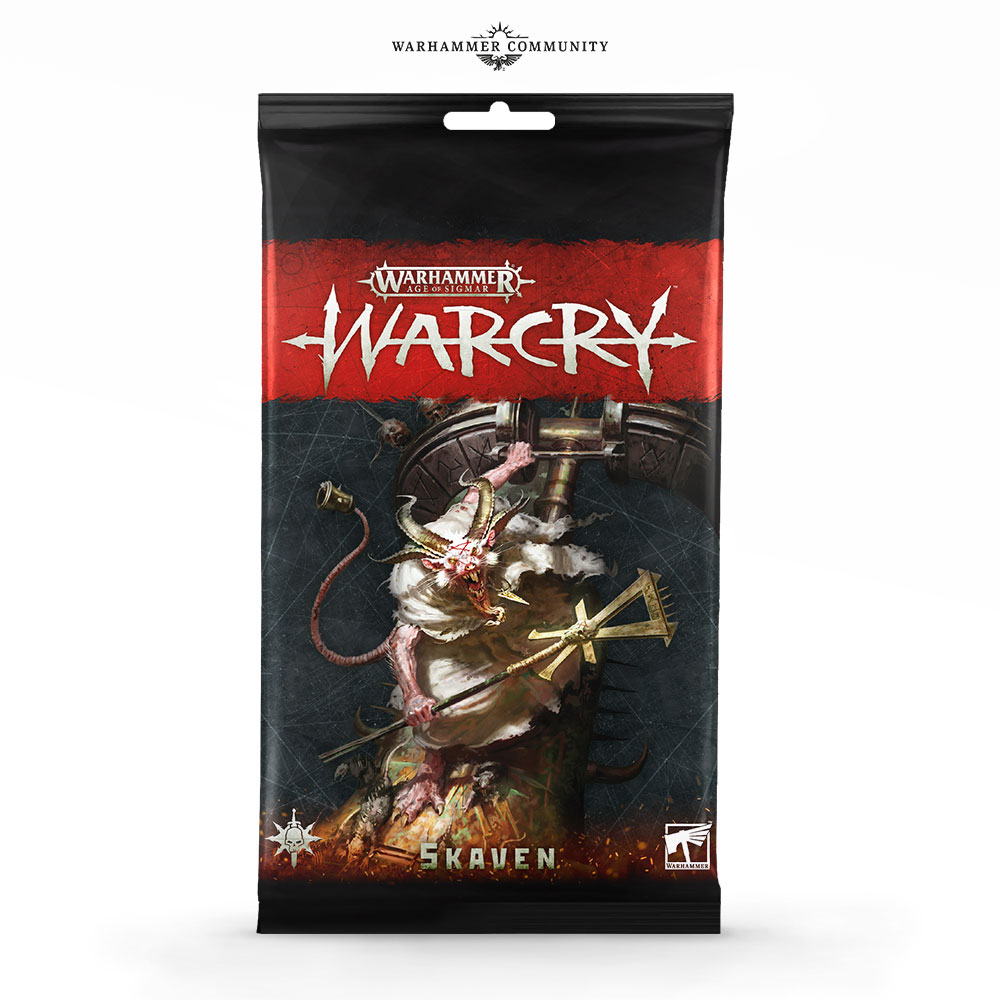 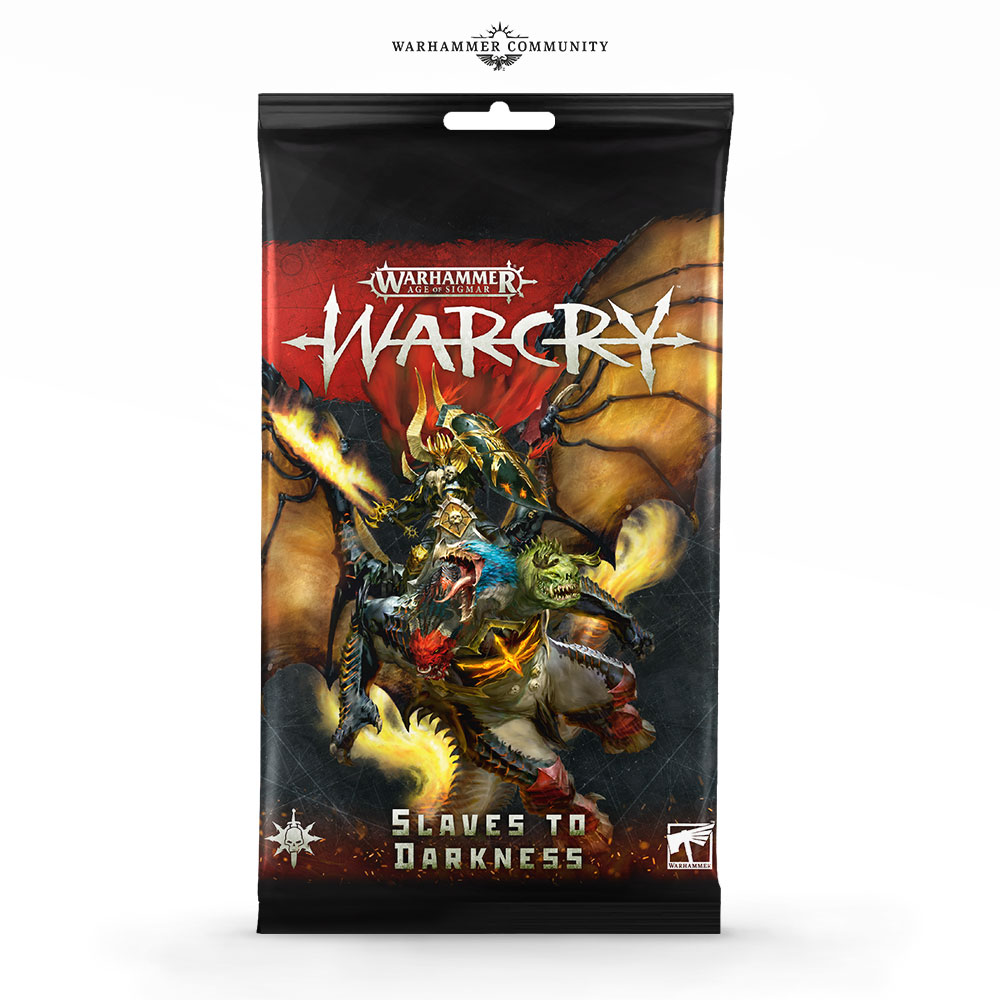 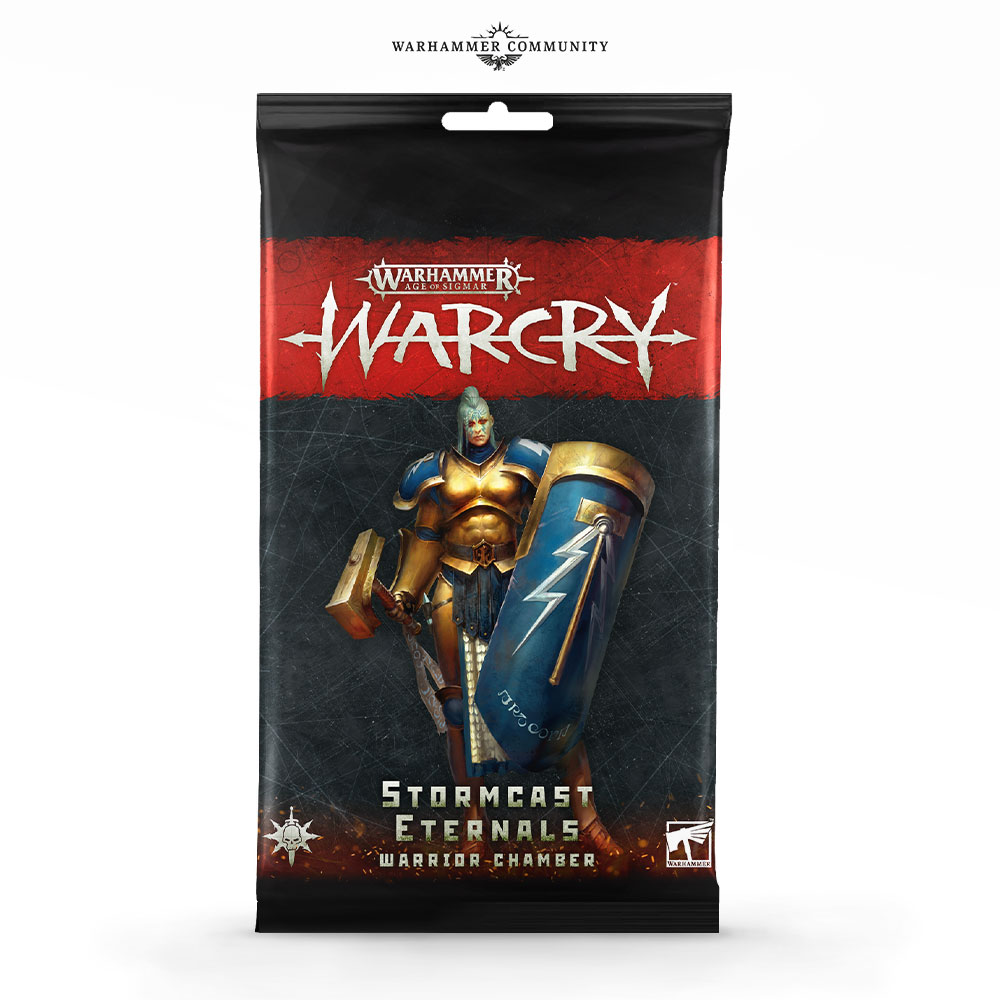 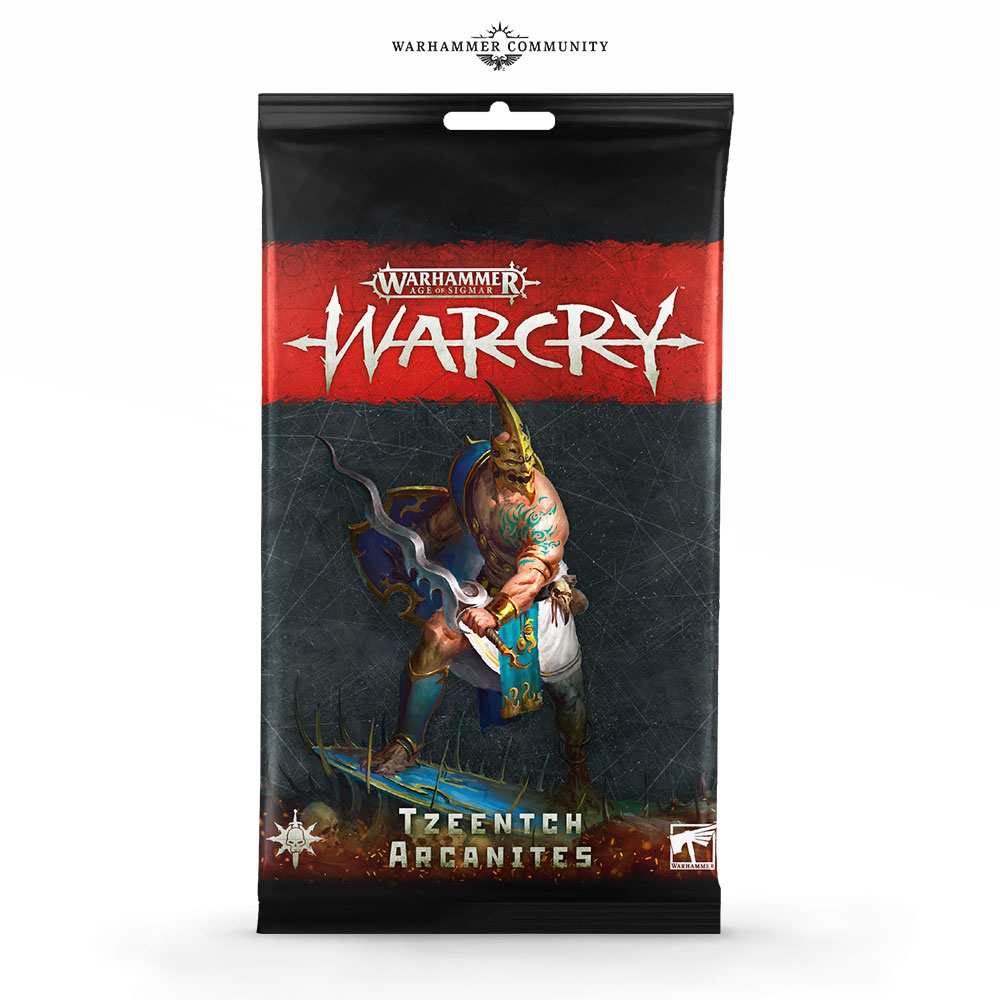 Of course, all of these warbands will need somewhere to fight! The Ravaged Lands: Souldrain Forest takes your battles into the woodlands around the Varanspire, providing you with new challenges and thematic terrain. 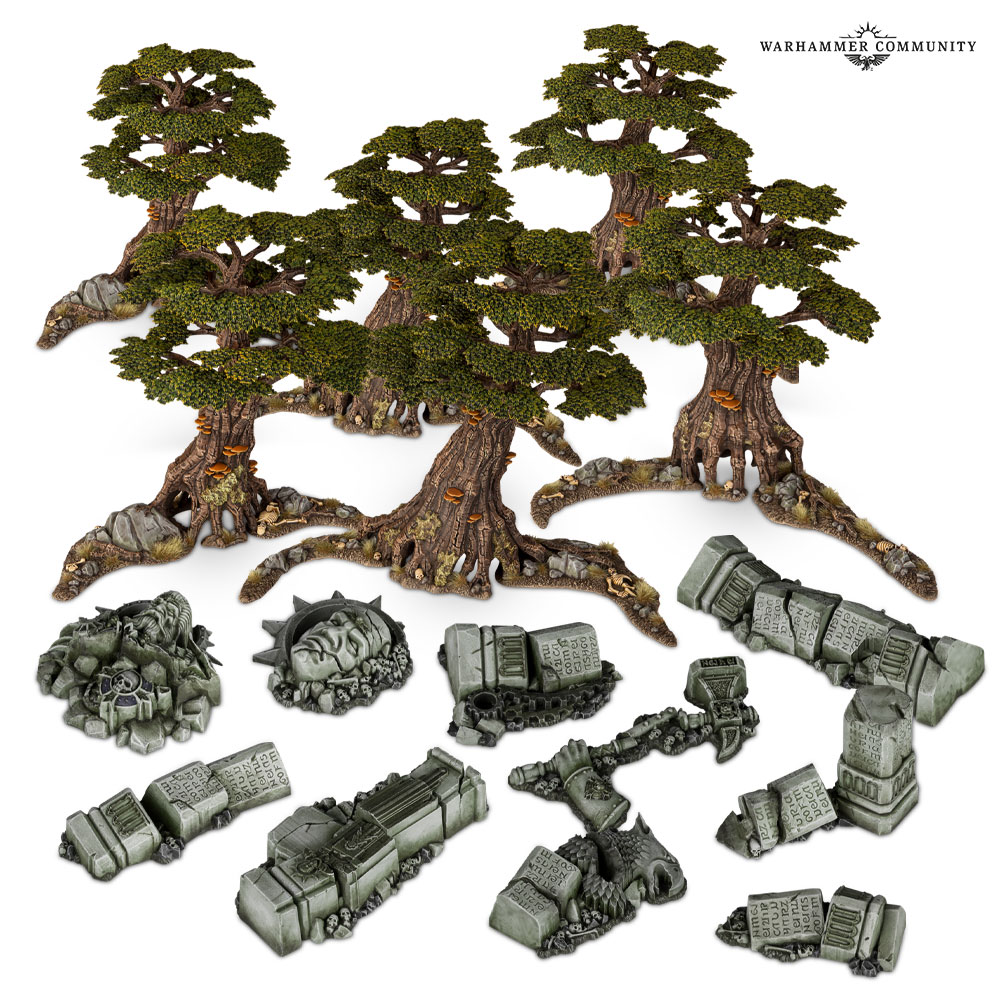 If you’ve still not taken your first steps towards claiming glory in the Eightpoints, then now is the perfect time to get into Warcry.

Deep in the underhive, the Palanite Subjugators battle to put down the insidious insurrections of the Corpse Grinder Cults. You’ll be able to recreate these conflicts with the release of two new gangs, first seen in the Necromunda: Dark Uprising boxed set. The Palanite Subjugator Patrol features six heavily armed law enforcement officers and comes with a selection of different weapons and head options, adding an element of customisation to every gang. Add some extra hitting power to an existing Enforcer Patrol or start a new one and bring Lord Helmawr’s ruthless justice to the underhive. 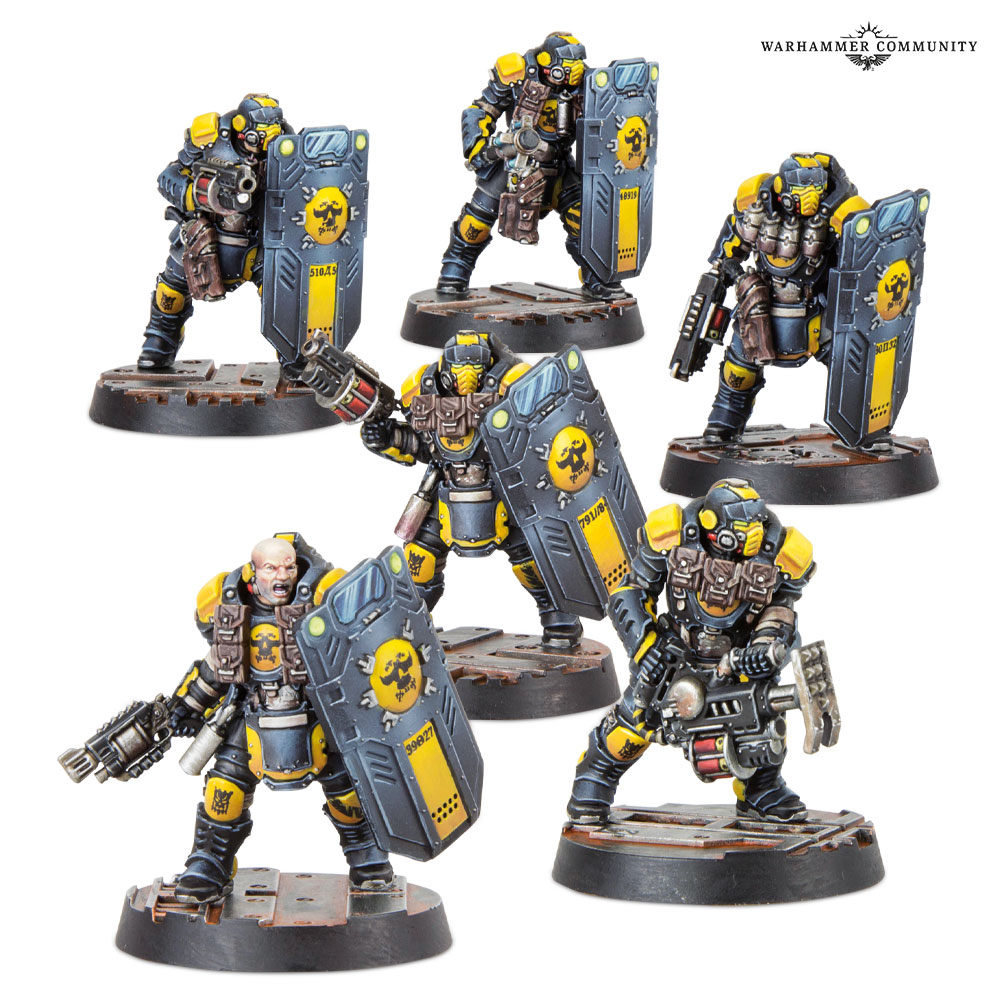 Facing them are the barbaric butchers of the Corpse Grinder Cult. This kit makes ten servants of the Lord of Skin and Sinew – four Initiates and six Skinners, the latter of which can also be assembled as Butchers or Cutters (the equivalent of Leaders and Champions from other gangs). They come with a variety of brutal tools originally designed for cutting up corpses but now repurposed for something much darker, along with a range of heads and other optional extras. Whether you’re starting a new gang or adding recruits to an existing cult, this kit is ideal. 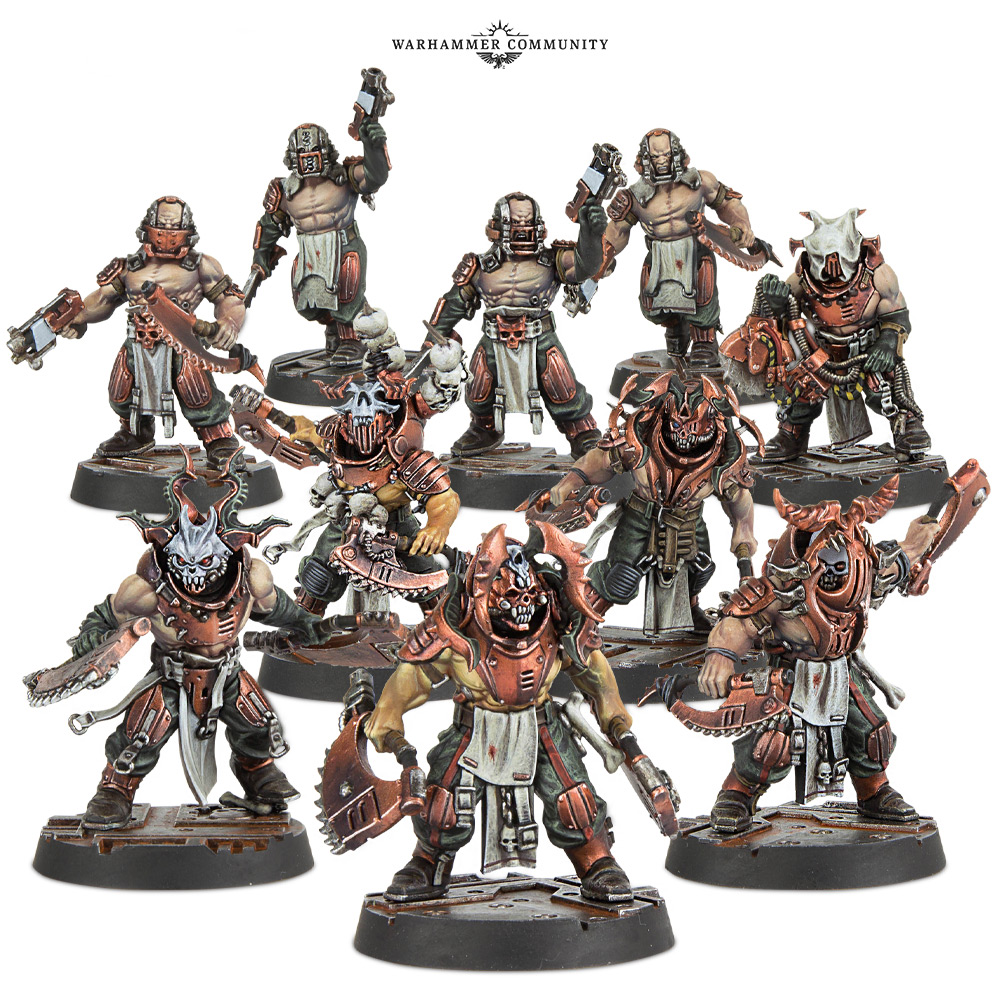 You can also give your cult an upper hand in the underhive by picking up the Corpse Grinder Cult Tactics Cards. The pack comes with four cards exclusively for the Corpse Grinders and another sixteen that can be used by any gang. You also get six blank fighter cards, each stamped with the Corpse Grinder logo, which are perfect for marking out the Leaders and Champions in your deck. 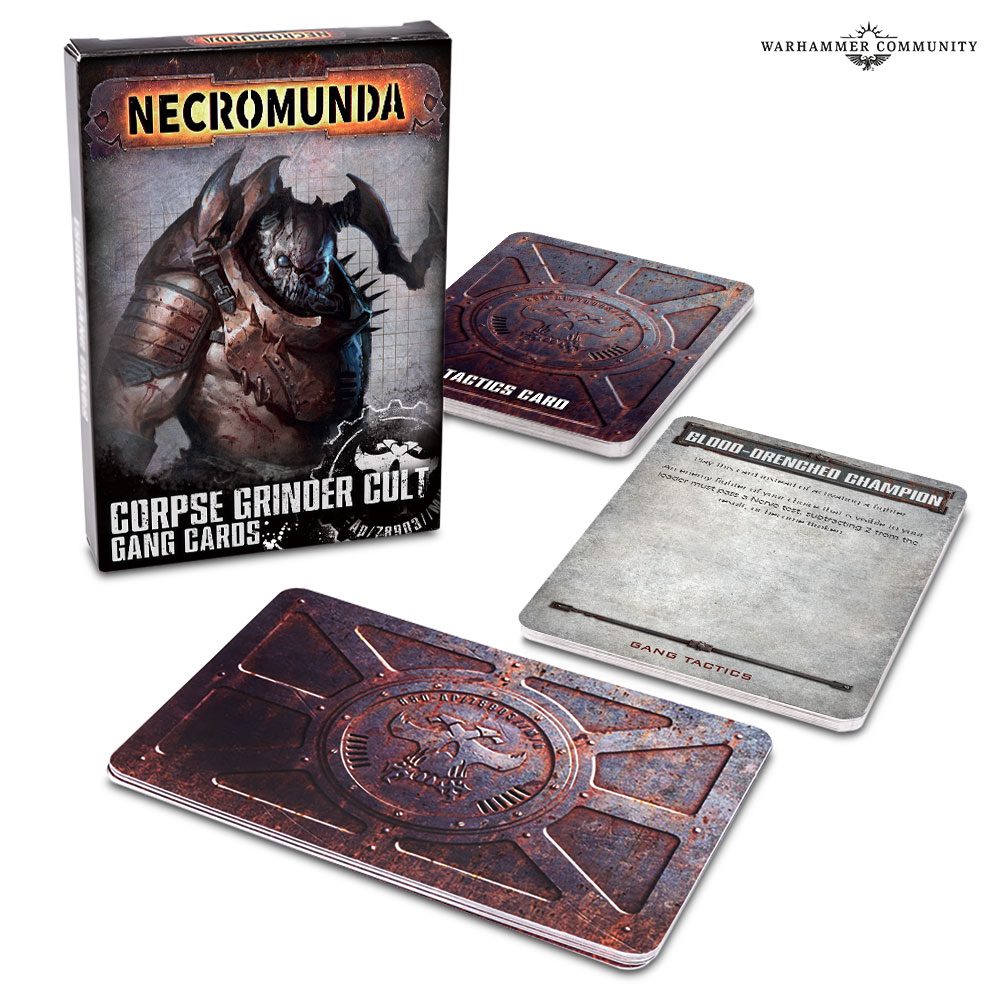 Finally, make sure that you appease the Lord of Skin and Sinew by picking up these special Corpse Grinder Cults dice. They are the colours of flesh and bone – perfect for your uprising. 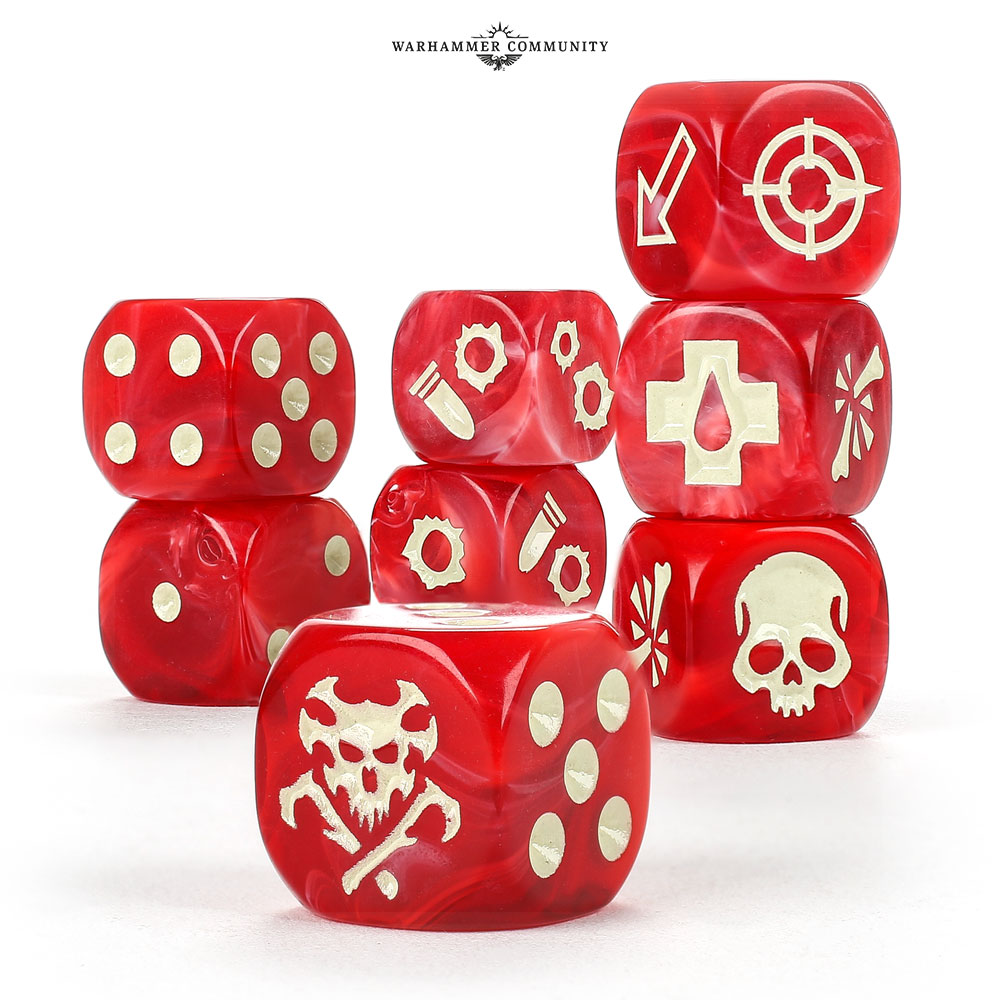 Regardless of which Gang you play, you’ll want to pick up some Zone Mortalis terrain for them to fight over. These kits have been designed to be as interchangeable as possible, offering maximum opportunity to create a variety of different scenery layouts. Of course, the Zone Mortalis kits aren’t just for Necromunda – use them for Warhammer 40,000, The Horus Heresy and Kill Team too! Want to create a bunker complex for your Primarch to storm? How about the interior of a space hulk for your Terminators to clear of a Genestealer infestation? An underhive sector where Deathwatch are fighting off an Ork invasion? You can do all of this and more with the Zone Mortalis kits, they’re just so flexible. 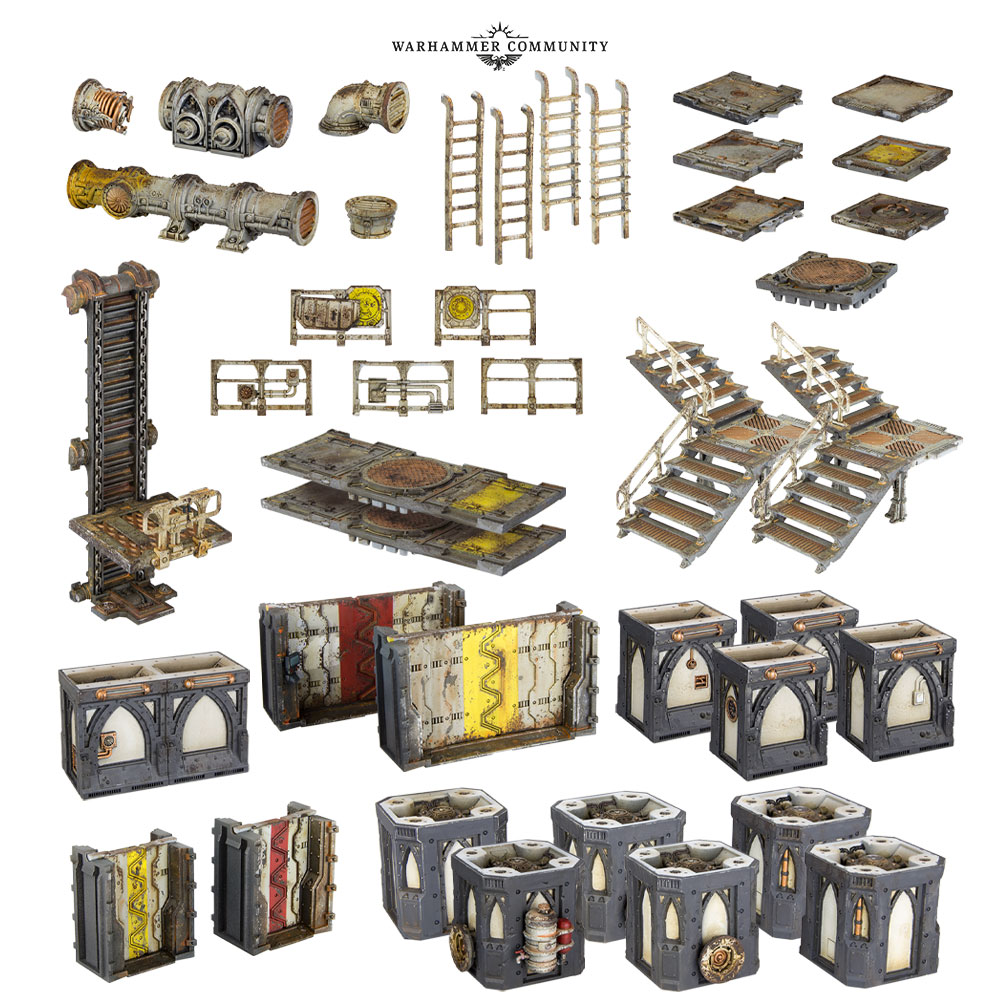 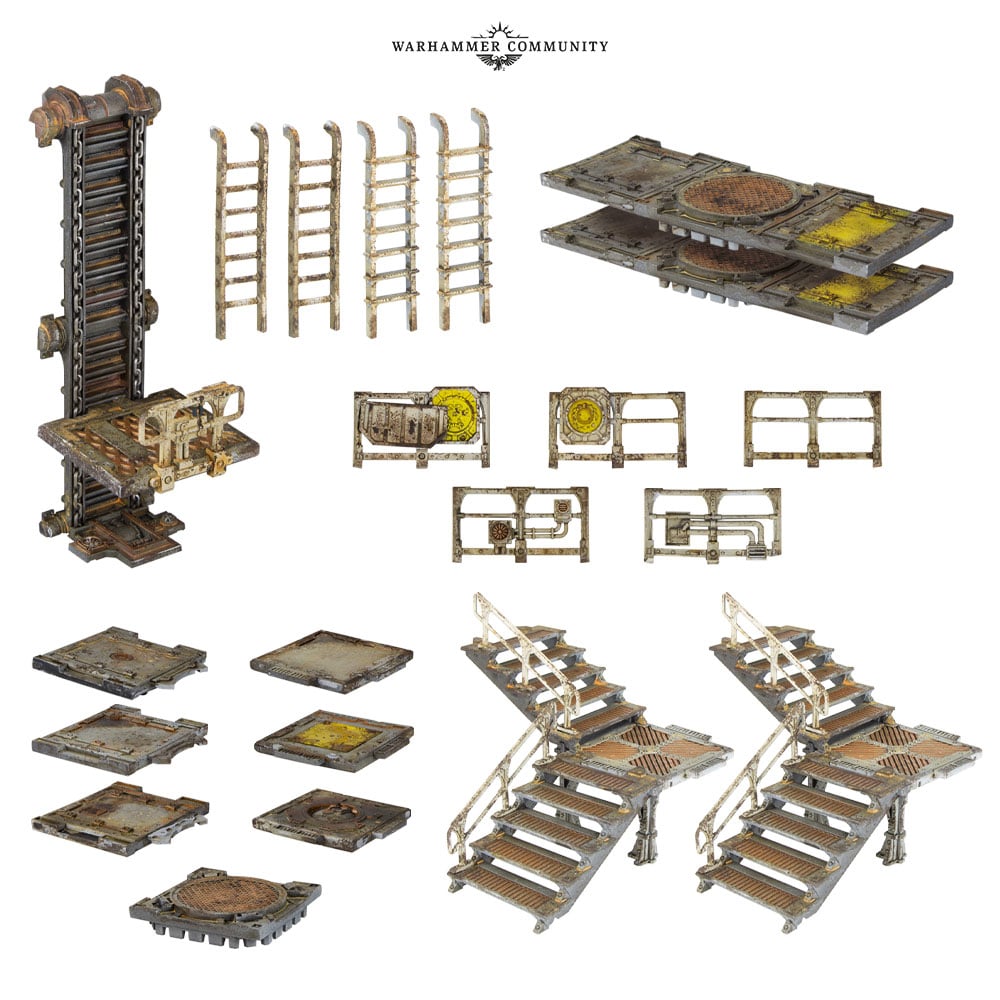 If you can’t wait to get your hands on these awesome new gangs and incredible scenery, then you can pick them all up now in the Necromunda: Dark Uprising boxed set.

In Middle-earth, a selection of classic models are returning to the fray. Track Merry and Pippin with the Three Hunters Mounted, featuring Strider and Legolas giving Gimli a lift and clear Druadan Forest of orcs with Ghân-buri-Ghân and his Woses Warriors. If you’re of a more evil bent then add some speed and manoeuvrability to your army with the Serpent Riders and Khandish Horsemen. Many of these models have been unavailable for some time, so this is a fantastic opportunity to add them to your collection. 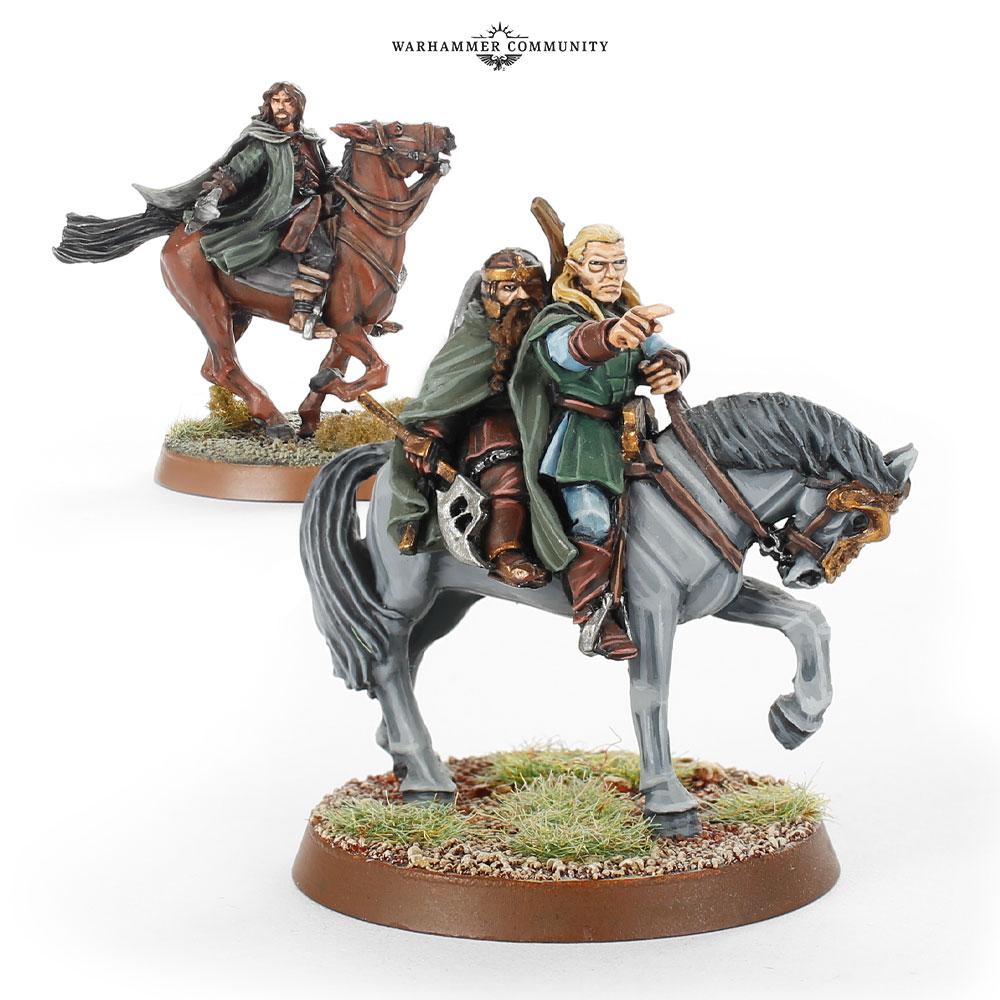 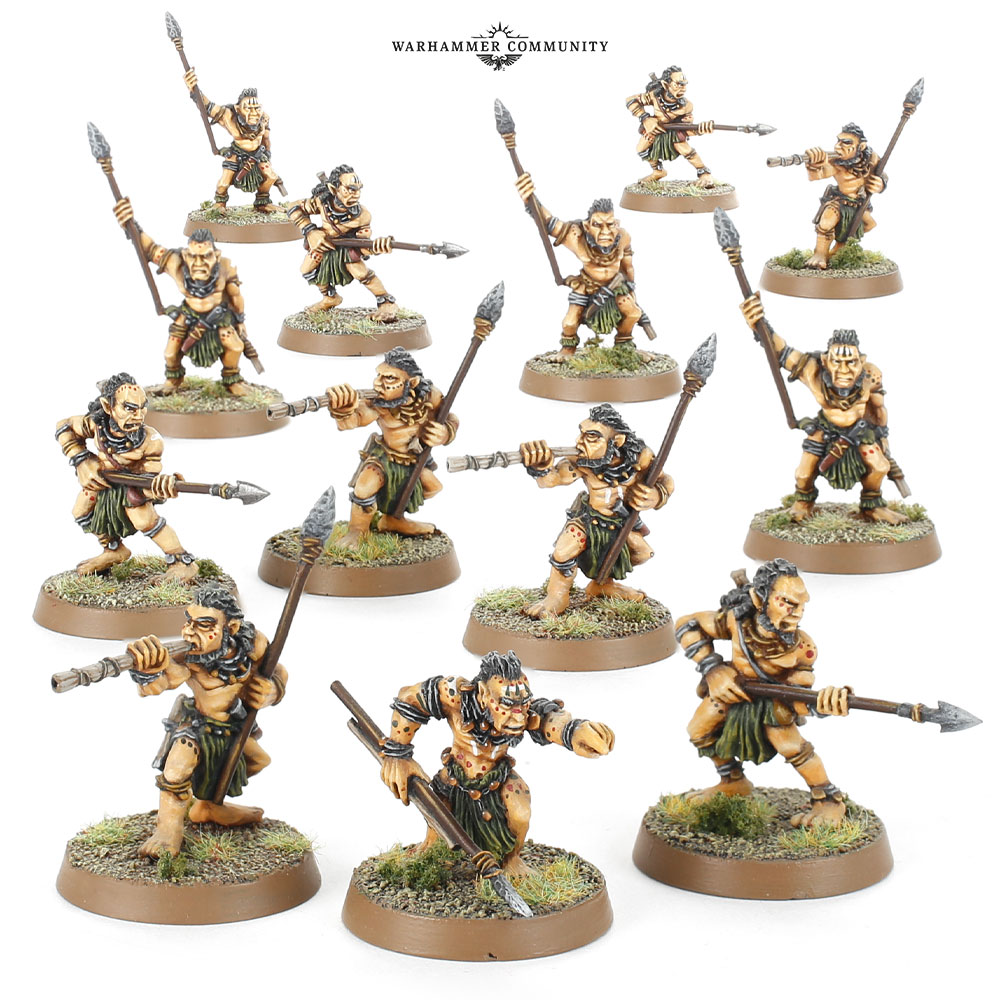 Also available to pre-order from next week is the Middle-earth Strategy Battle Game Matched Play Guide. This supplement is perfect for anyone who enjoys Matched Play and for tournament organisers. It includes all 18 Matched Play scenarios, which includes 6 new ones and 6 new doubles scenarios, as well as rules and advice for running campaign events. 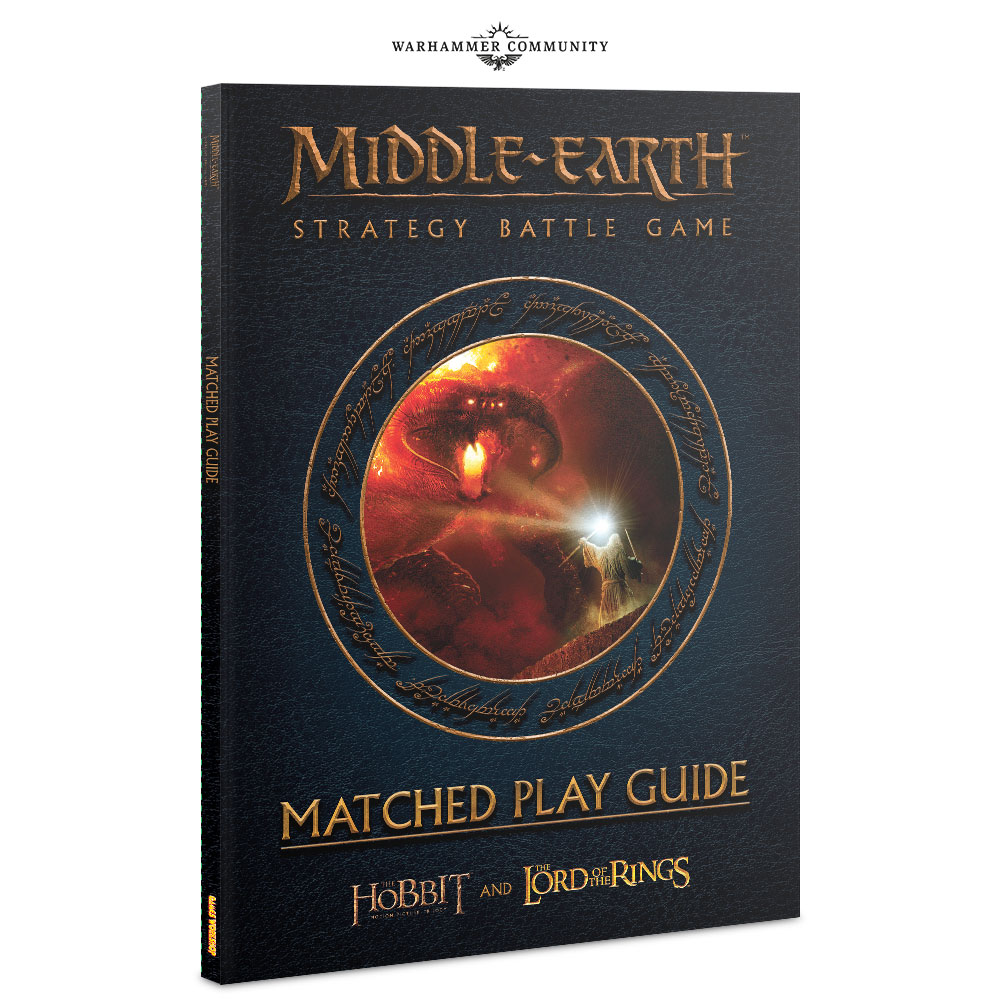 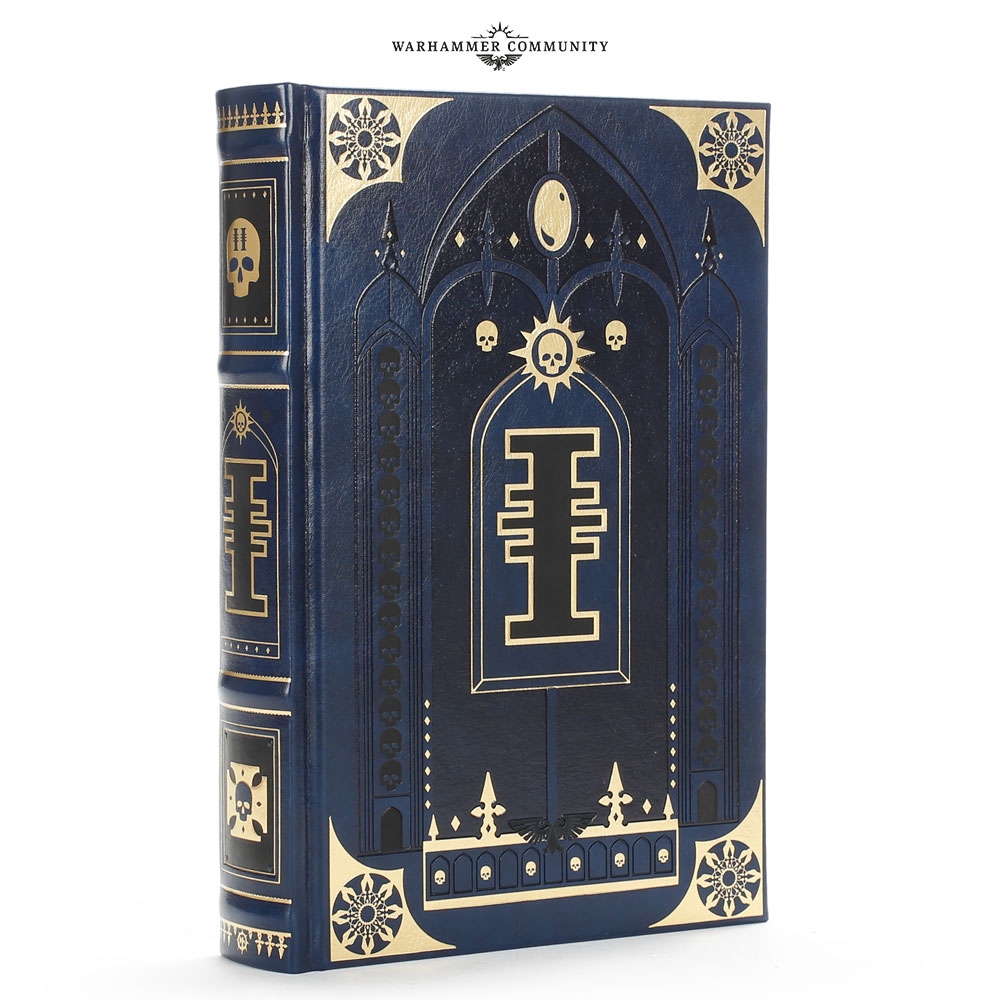 Inquisitor Covenant’s quest to stop a sect of renegade Inquisitors continues as he battles to deny their sinister design on an Imperial shrine world wreathed in darkness. But what will he do when his foes seek to raise a Living Saint? The story that began in Resurrection continues in this beautiful special edition of Incarnation, featuring ribbon bookmarks, art on the fore-edge, and includes ‘The Faith of the Father’ short story and an afterword from author John French. These are limited to just 750 copies, so make sure you move fast next Saturday to pick yours up.

Two more Horus Heresy books return as smaller format paperbacks. Find out what happened when Leman Russ took on Horus in solo combat in Wolfsbane and check out the impact that this legendary fight had on the Traitor Legions as they make their way to Terra in Slaves to Darkness. 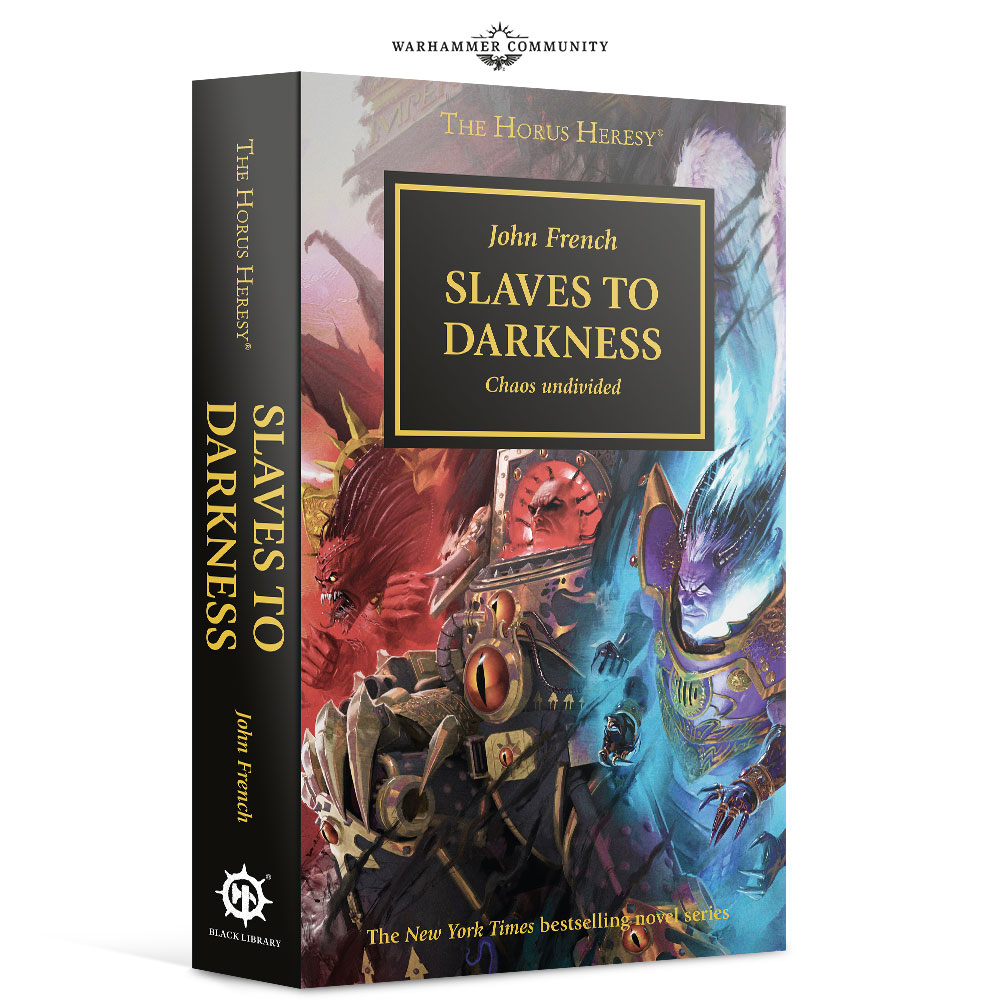 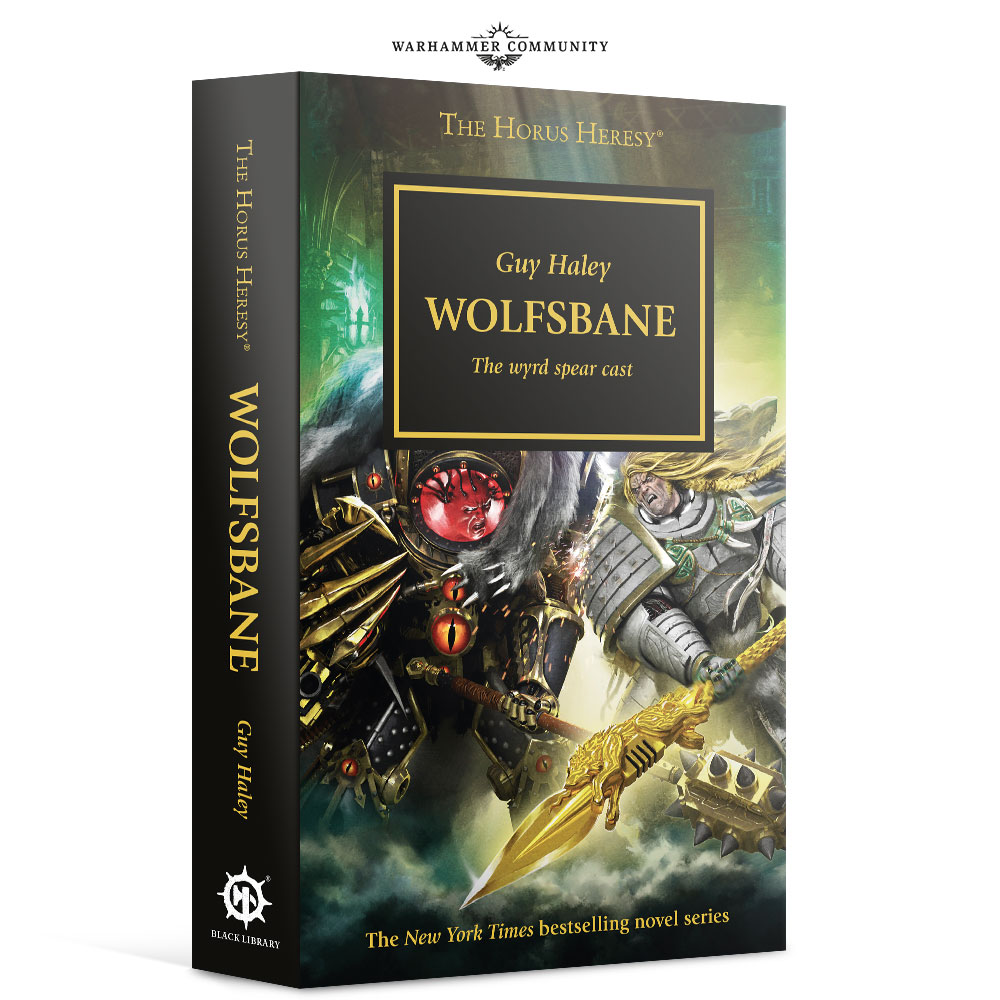 Fast forward 10,000 years and the Imperial Fists are sent to purge a mysterious cult on the world of Ghyre. Can Primaris Librarian Aster Lydorran and his brothers save the planet or are they already too late? 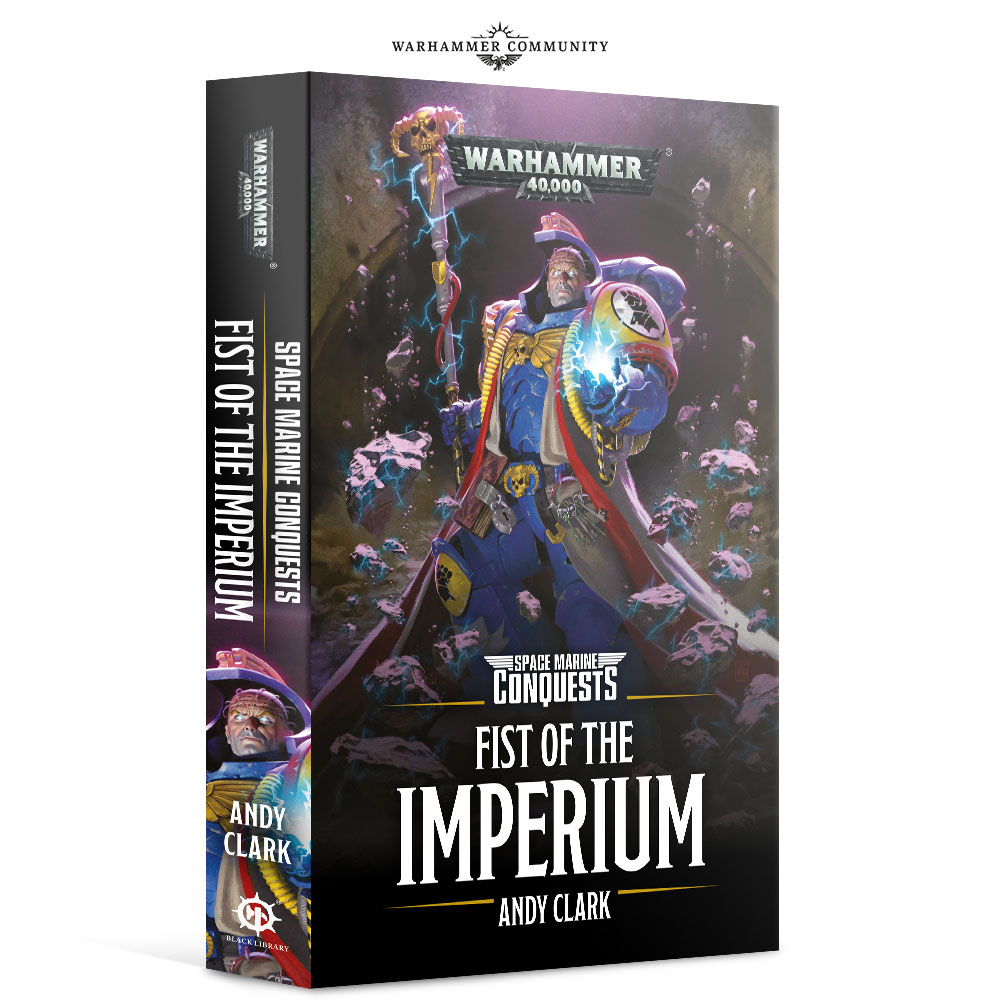 Finally, we get back to where we started with Warcry: The Anthology. This collection tells the tales of some of the tribes of Chaos who are seeking to earn Archaon’s favour in the Eightpoints. Now available in paperback for the first time, this is a great chance to read some epic Warcry tales. 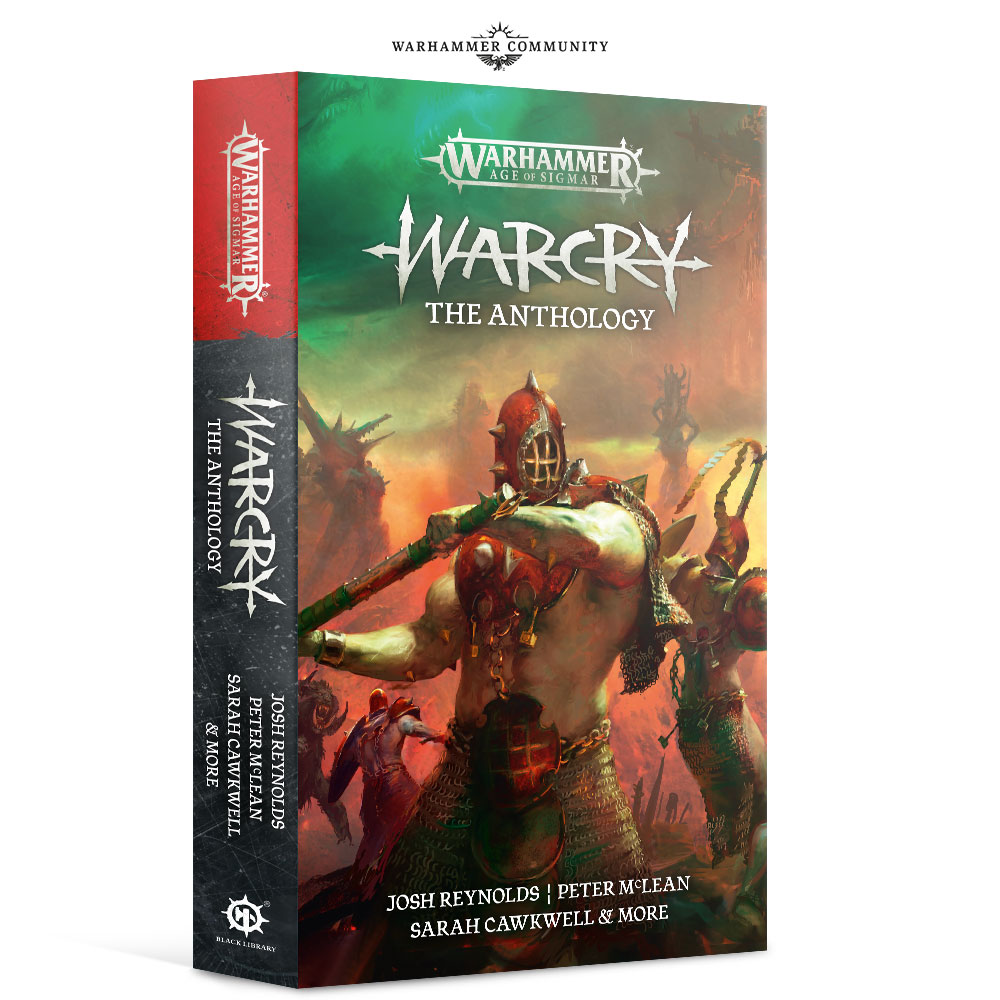 Everything here is available for pre-order from Saturday, but make sure you check back in throughout the week as we take a closer look at what’s coming for Warcry and Necromunda. In fact, sign up to our newsletter so that you never miss anything.