Today’s pre orders are up, and this week it is the turn of the Fyreslayers to get their Battletome! That’s not all however, the Chaos Space Marines are getting some new models too! 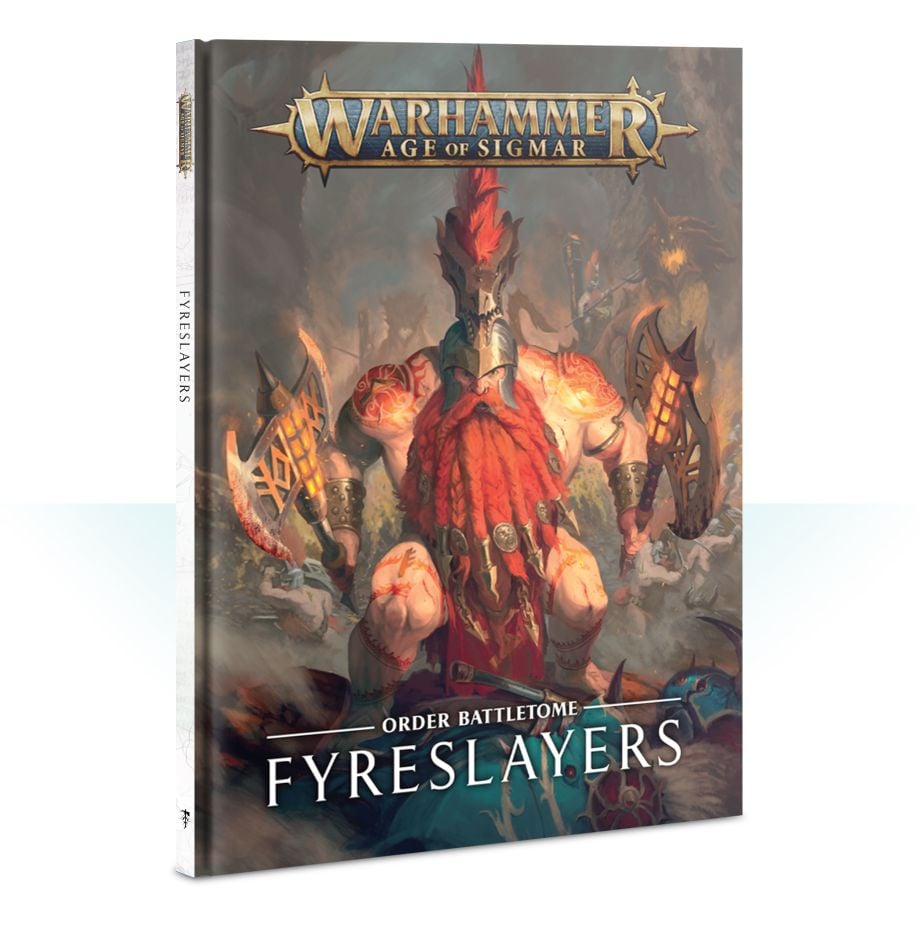 From flame-filled magmaholds they march, the power of their war-god flowing into them from blazing runes of gold hammered into their flesh.

Master the blazing wrath of the Grimnir’s chosen sons with Battletome: Fyreslayers – your complete guide to these mighty warriors. Part mercenary, part warrior-monk, Fyreslayers quest endlessly to gather the golden shards of their shattered god, and are among the most feared warriors in the Mortal Realms. In this book, you’ll discover the long history of the Fyreslayers – from their foundation in the Realm of Fire and how they mastered the arcane secrets of ur-gold runes to their latest battles in the Soul Wars. Stunning and evocative art brings the world of the Fyreslayers to life, while a showcase of beautifully painted miniatures is great for inspiring your own armies.

With this book, you’ll be able to unleash the might of the Fyreslayers yourself on the tabletop. A set of allegiance abilities rewards you for taking a pure Fyreslayers army with the arcane powers of the ur-Gold runes, while a set of lodge rules allow you to dedicate your army to some of the most legendary warrior-brotherhoods of Fyreslayers. Command Traits and Artefacts allow you to customise your heroes, while Magmadroth traits make these mighty beasts of flame even deadlier.

The book is also a great resource for collectors and painters, featuring some top tips for building up your first army and making it look awesome.

This battletome contains:
– Lore and art exploring the background of the Fyreslayers
– A showcase of beautifully painted miniatures
– Allegiance abilities for Fyreslayers, including battle traits, 2 tables of command traits, 4 tables of artefacts of power, Magmadroth traits, prayers, and Magmic Invocations which can be used by Fyreslayer Priests
– Background and rules for fielding the following named lodges: Vostarg, Greyfyrd, Hermdar, and Lofnir. Each includes abilities, command abilities, command traits, and artefacts of power which are unique to that lodge
– Two battleplans, each epitomising the way the Fyreslayers wage war, including objectives for both sides, deployment maps, special rules, and victory conditions.
– Path to Glory campaigns – rules for creating a Fyreslayers warband for Path to Glory. Includes Champion Rewards Table, and Followers Rewards Tables
– 4 warscroll battalions for fielding different combinations of models
– 15 warscrolls, plus 3 Magmic Invocation warscrolls and a warscroll for the Magmic Battleforge
– Pitched Battle Profiles for all units, Magmic Invocations, and the Magmic Battleforge featured in this battletome, including min/max unit sizes, points values and battlefield roles 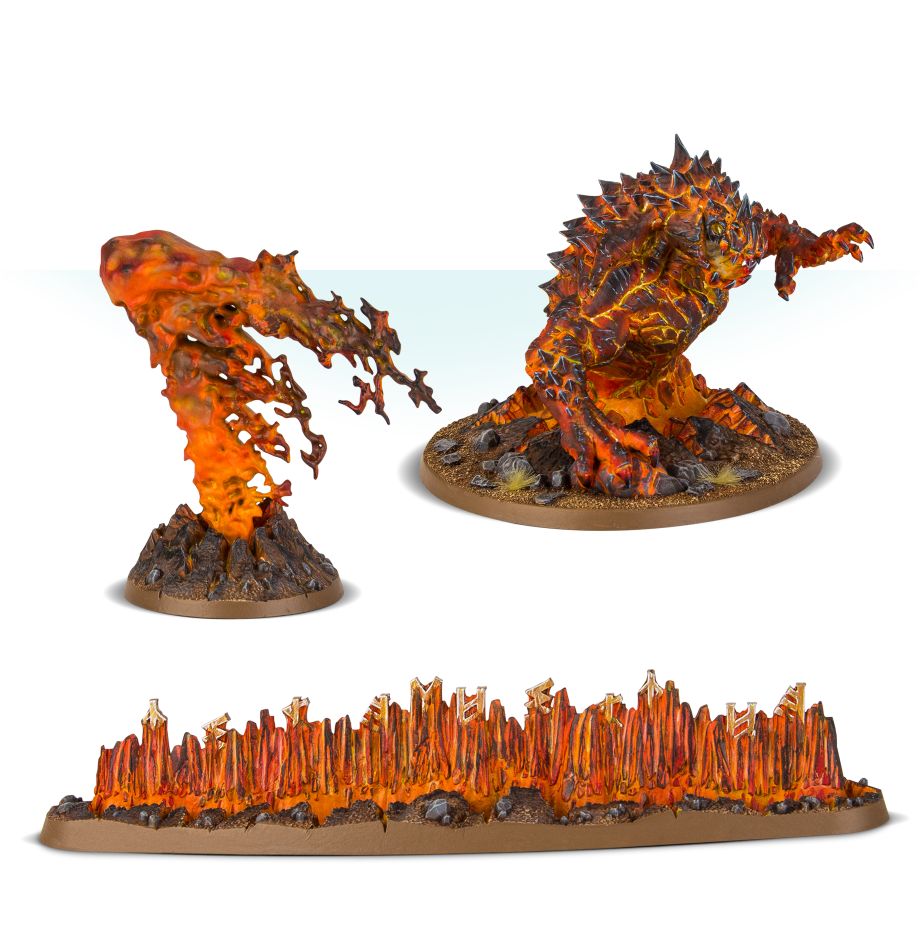 Summoned by the blazing will of the Runemasters and Runesmiters, Magmic Invocations are magical constructs forged of arcane fire that bring death to the foes of the Fyreslayers.

In this set, you’ll be able to build a set of Magmic Invocations of your own, allowing you to mater the full might of your Fyreslayers army. Inside, you’ll find:

– The Zharrgron Flame-spitter, a geyser of molten lava that deals devastating damage to massed infantry
– The Runic Fyrewall, a barrier of gold and flame that shields your units from harm
– The Molten Infernoth, a raging elemental that rampages across the battlefield, slaying your enemies while leaving the Fyreslayers untouched

For more information, check out the free warscrolls for these models, available to from the Downloads tab. This kit is supplied in 22 plastic components, and is packed with 1x 120mm oval base. 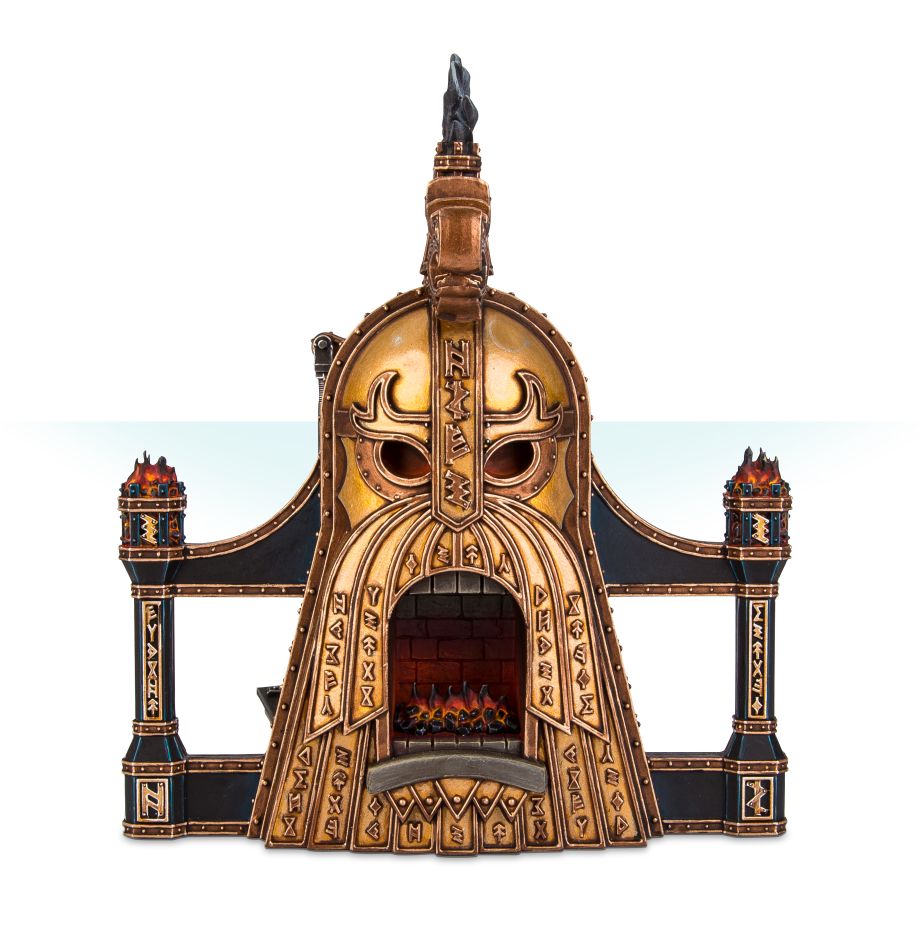 Formed instantaneously from molten metal, the Magmic Battleforge is a reflection of godly power, a manifestation of Grimnir’s fury fused with the white-hot fires of Vulcatrix. This mystic furnace can be summoned to a battlefield, where its elemental heat can ignite ur-gold runes and stoke the powers of the Zharrgrim.

The Magmic Battleforge is a piece of terrain available to every Fyreslayers army that increases the power of your Fyreslayers Priests. Costing no matched play points, this towering edifice is a fantastic addition to your collection allowing you to add some Fyreslayers flavour to any battlefield, as well as offering a number of invaluable in-game effects. Your Priests will be able to harness the forge’s powers to assist in their prayers – or use it to better defend nearby Fyreslayers units.

This kit builds one Magmic Battleforge, and is supplied in 33 plastic components. 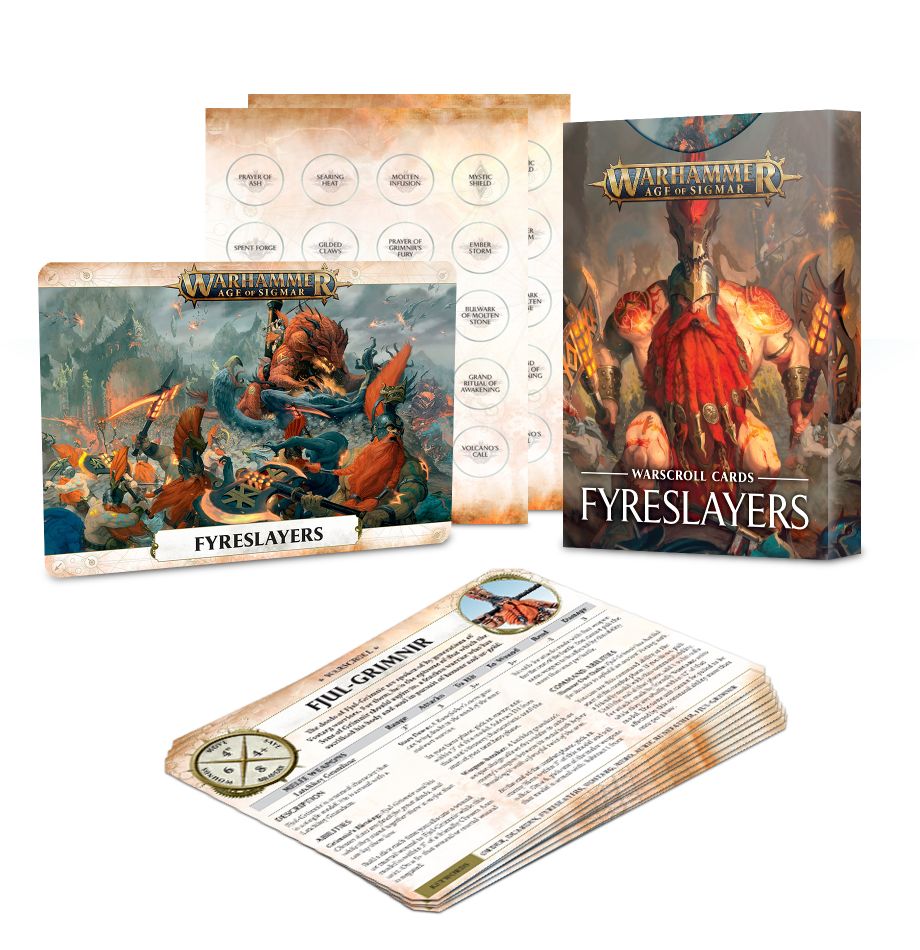 Master the might of your Fyreslayers with these easy-reference Warscroll Cards! Warscroll Cards are an invaluable resource for gamers that take your key warscrolls and abilities, and allow you to check them out at a glance. This set also includes a number of tokens for keeping track of in-game effects, meaning you won’t have to worry about trying to remember them!

This set contains small-format warscrolls for all the Fyreslayers units, plus the Magmic Invocations and the Magmic Battleforge. Please note – you’ll need a copy of Battletome: Fyreslayers to make use of the contents of this set! 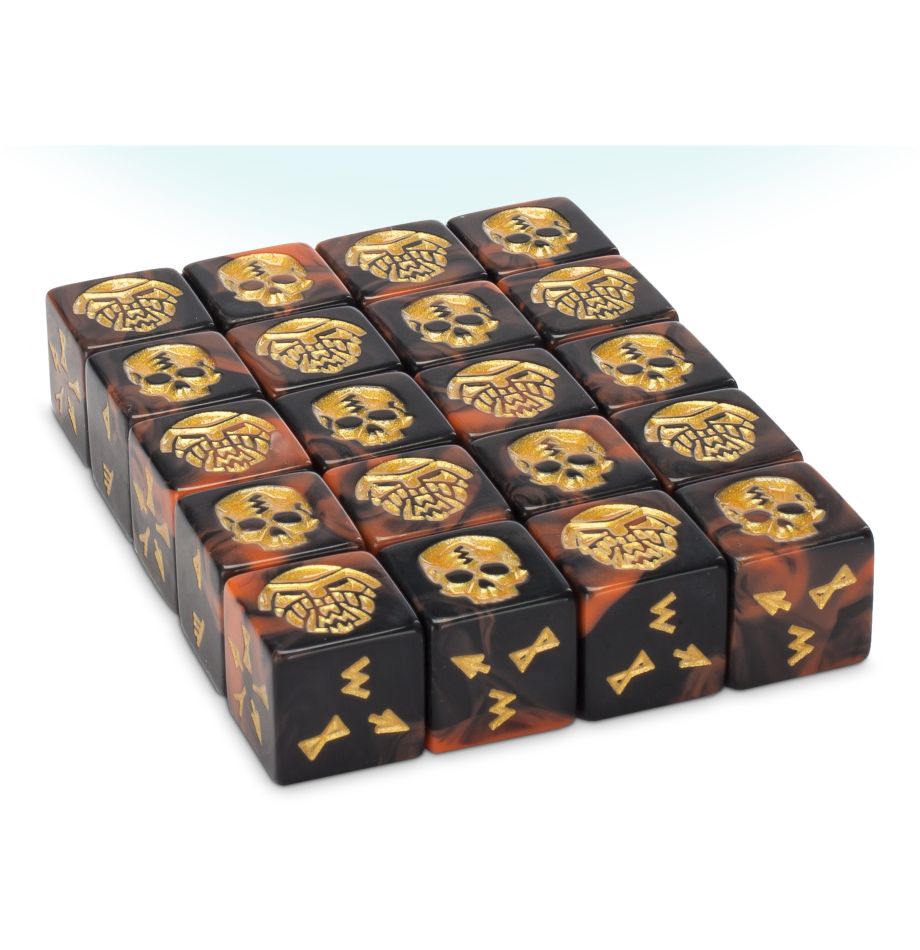 Sure, your normal dice might be pretty cool, but are they inscribed with the burning runes of Grimnir? We thought not! Grab yourself some dice worthy of a true Fyreslayer with this awesome custom set – almost as fun to throw as a fyresteel axe…

This set contains 20 Fyreslayers dice, cast in a magma-effect plastic and featuring runes in place of pips. 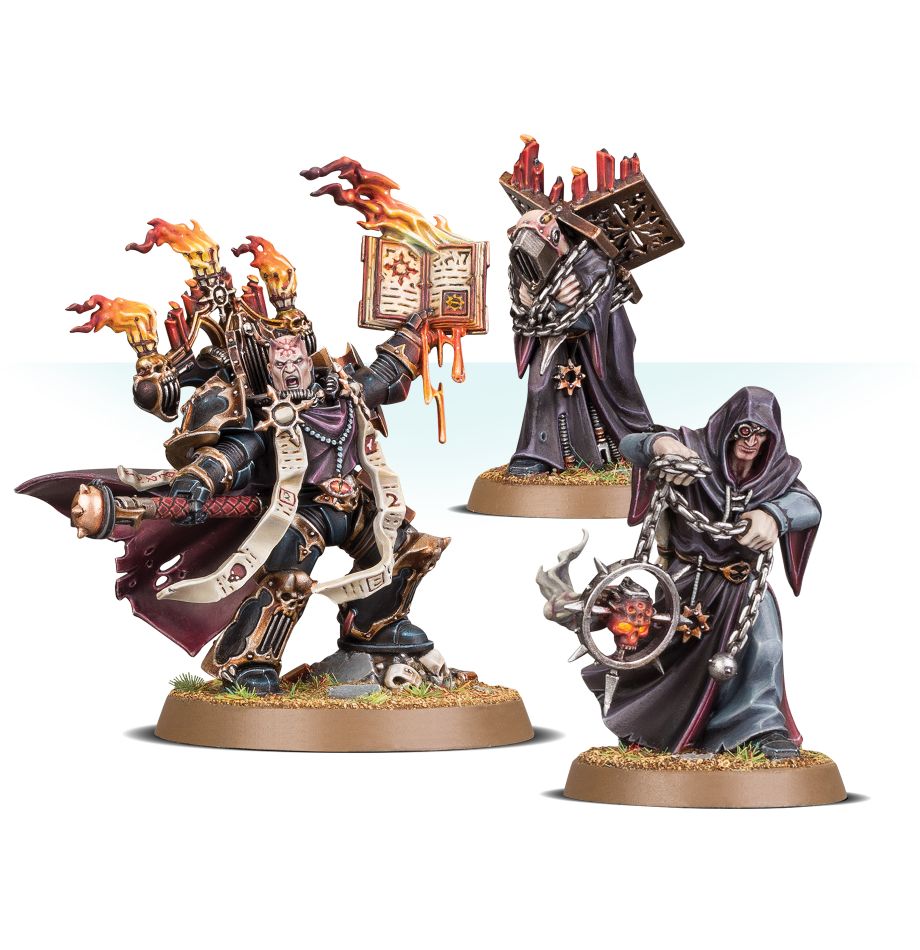 Dark Apostles make up the priesthood of the Dark Gods. Just as the Chaplains of the loyalist Space Marines uphold the creeds of their Chapters, the Dark Apostles devote their lives to the propagation of the unholy word, actively spreading the worship of Chaos across the galaxy. Their efforts do not go unrewarded – Dark Apostles are surrounded by daemonic auras of protection that shimmer and writhe as they chant their blasphemous prayers. 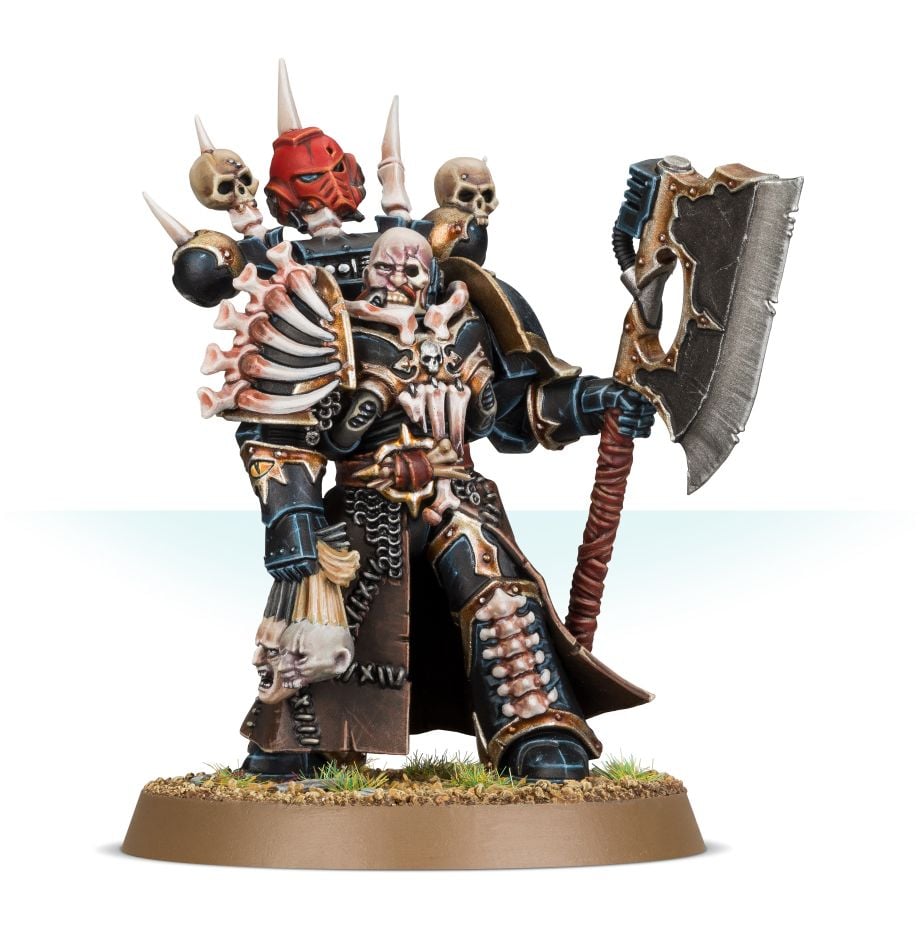 Amidst the thunderous tumult of battle, a Master of Executions strides unflinchingly forwards, his mind focused on the gruesome decapitations he will soon administer. He is a being of singular purpose, a brutal weapon in the arsenal of the Heretic Astartes, and his existence is driven by an unquenchable desire to take as trophies the heads of mighty champions and charismatic leaders.

The Master of Executions is multipart plastic kit. He is a striking HQ choice in a Chaos Space Marines army whose sole purpose is to eliminate enemy characters with his fearsome (and utterly enormous) axe of dismemberment. The model displays all the grisly hallmarks of an executioner, with a trophy rack, bone decoration all over his armour, and he also clutches a pair of recently decapitated heads in his right hand.

This kit builds one Master of Executions. It is supplied in 9 plastic components, including a choice of bare or hooded head, and comes with one 40mm Citadel Round Base. 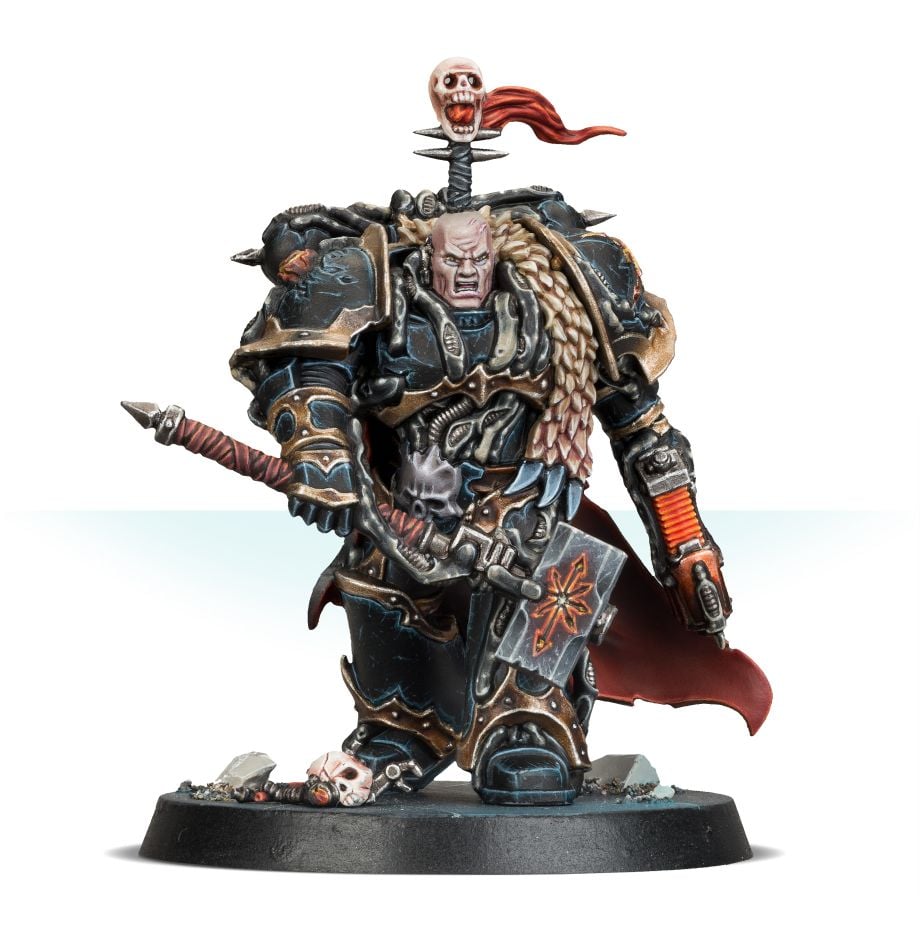 A Chaos Lord is a tyrannical warrior king who lives to bathe in the blood of worlds. He strives to bring whole star systems to their knees in the name of his patron deities. Typified by merciless ambition and fierce pride, many of these champions of disorder were once noble Chapter Masters and Captains of the Adeptus Astartes, but long years of unremitting war have twisted their souls beyond recovery.

The Chaos Lord is multipart plastic kit. Previously only available in Warhammer Quest: Blackstone Fortress, the Chaos Lord is a single-posed, push-fit miniature. He is a potent HQ choice in a Chaos Space Marines army and makes for an excellent Warlord option to lead your forces. The Chaos Lord is equipped for close-ranged combat, with a powerful combination of plasma pistol and thunder hammer making him a great front-line fighter.

This kit builds one Chaos Lord. It is supplied in 6 plastic components and comes with one 40mm Citadel Round Base.